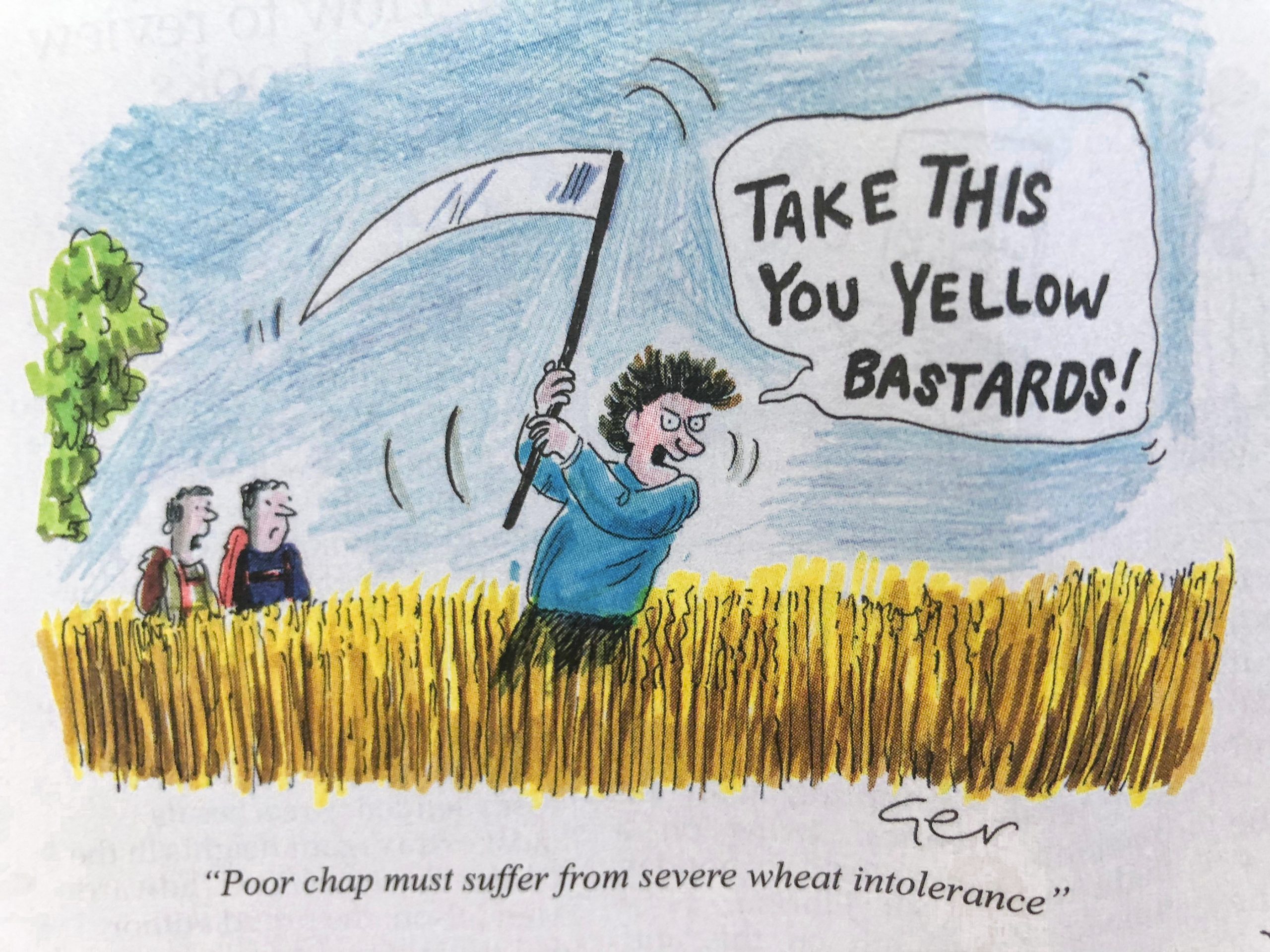 A Short History of Private Eye

Walking down Dean Street from Soho Square Gardens, you might not know you’re just a stone’s throw away from a satirical magazine.

The cramped office is nestled between an architecture firm and a salon just opposite a piano bar.

You can spot it by the blue door with Private Eye emblazoned above it.

Soho is the perfect home for any salacious rag in more ways than one. This was the place to be for many of London’s bohemians going back more than a century.

The neighbourhood has long been a haven for those who despise the British establishment, especially when the hate runs both ways.

Soho is not what it once was, but the heritage is still there if you know where to look.

Many people love Private Eye for giving the rich and powerful a damn good kicking every fortnight for the last sixty years. And they’re not wrong.

However, we should ask what the Eye has demanded beyond laughing at the expense of our stupid elite.

Private Eye still can annoy the pompous twits who govern us, but it is far from an underground operation. Editor Ian Hislop has been a regular on mainstream TV and radio for more than three decades.

So Private Eye has come a long way from its origins.

Yet the magazine probably would have died a quick death had it not been for its combination of muckraking and scathing satire.

People looking to change the world can do better than laugh at cartoons. But, in the absence of hope, the absurd might be all that’s left.

This is why many people still pick up the Eye.

Private Eye began life in 1961 as a vehicle for juvenile humour and not much has changed in the decades since.

In line with English tradition, the Eye was founded by public schoolboys who built a circle of collaborators during their days at Oxford.

God forbid the British upper-class talk openly about their own privileges.

These boys had run a very similar student magazine called The Salopian at Shrewsbury School. It was one of the prototypes for the Eye.

Although The Salopian was a key part of the backstory, the Eye had no one model and drew a lot of inspiration from Punch and The Week.

Ingrams once likened the Eye’s purpose to that of a strong weed killer.

Communist journalist Claud Cockburn ran The Week in the 1930s and ‘40s. It was a scandal sheet with radical politics and popular reach.

Cockburn would later contribute to Private Eye and even edited a special issue of the magazine.

The Shrewsbury boys would dominate the magazine for more than twenty years, but they were joined by other public schoolboys and even some public school girls. Booker was involved with the Eye until his death in 2019.

It’s a sad testament to the class character of British journalism that even the satirists are very middle class.

Yet the Eye turned out to be much more than the shared organ of sniggering public schoolboys.

Probably the best journalist to work for the Eye was Paul Foot, nephew of Labour MP Michael Foot, himself a long-term member of the Socialist Workers’ Party (SWP). He was one of the most impressive investigative journalists of his generation.

Foot used his position at Private Eye to break stories like the Poulson scandal and campaign over miscarriages of justice like in the Birmingham Six case. He also ran articles on the Lockerbie bombing case that still haven’t been dispelled.

One part of the magazine is radical and favours the hard work of investigative journalism, while another part is embedded in the establishment.

The fun and games of satire may be the only way to keep the magazine in one piece.

Christopher Booker was the first editor of Private Eye, but he was ousted just two years into his reign. Richard Ingrams conspired to remove Booker while he was away on holiday.

This kind of backbiting and plotting has been a crucial part of the Eye’s history.

Booker later called Private Eye “the nastiest thing in British journalism”. He even advised a friend to sue the magazine when he felt it had rubbished their reputation with false stories.

Originally, Ian Hislop set out to reduce the Eye’s time in court, but he soon found out this was not easy to achieve. He has managed to rack up more days in court for libel than any other editor.

Hislop is now reportedly the most sued man in Britain.

The Most Sued Man in Britain

Private Eye began publishing the work of a young Ian Hislop in 1980 after he interviewed Peter Cook over a liquid lunch.

After several drinks, Hislop had not just failed to take notes but had forgotten to turn on his recorder. Nevertheless, Cook wanted to give him a job.

Ian Hislop came from an international family that lived in territories as far apart as Nigeria and Hong Kong. He briefly attended school in Jeddah, Saudi Arabia, where one of his classmates was Osama bin Laden.

Back in the UK, Hislop attended Ardingly College, a boarding school, where he naturally became head boy. He would later go to Oxford University.

In the early 1980s, Richard Ingrams was at the height of his influence. The Ingrams era was the formative period when the magazine defined itself. The style of the magazine is still very much the same as it was under his leadership.

Even thirty-five years after Ian Hislop took over, Private Eye has not changed much from the days when it was thrashed out by typewriter and assembled by hand.

The transition to high-tech production was carefully managed to maintain the same look.

Most British publications work very hard to avoid getting sued for libel. Others have made a career out of it. The Eye is probably the best example of the latter.

The magazine welcomed feuds with the super-rich.

Wealthy businessmen like James Goldsmith and Robert Maxwell were favourite targets for the magazine. Both men tried to destroy Private Eye, and both failed despite their vast resources.

After his first big scandal, Maxwell made it his mission to crush all media opposition to his business operations. There was no bigger opponent, in his mind, than Private Eye.

Robert Maxwell bragged that he had shut up Private Eye “for good” in 1975. He spoke too soon and found himself in running battles with the muckraking magazine until his death 16 years later.

In the winter of 1986, Maxwell hatched a fiendish plan to spitefully tarnish Private Eye’s editors.

He demanded revenge and had the Mirror team put together ‘Not Private Eye’.

Not Private Eye was going to be a one-off magazine attacking the Eye. Worse still, Robert Maxwell wanted to print a million copies and he was threatening WHSmith’s for selling Private Eye.

It even included a depiction of Ingrams as a Nazi.

But Peter Cook heard about Maxwell’s plan and came up with his fiendish own. He believed that the journalists would prefer not to be making this magazine. So he sent the Mirror editors a crate of whisky and waited.

#OTD 1972, the London charivari PUNCH offered a PRIVATE EYE parody. Richard Ingrams speaks from the throne room… @PrivateEyeNews
As well as The Showbiz of Cooking, so not much has changed – and they’re psychic “How to boil an egg”. pic.twitter.com/iUHYKn0NS1

After a couple of hours, Peter Cook assured Ian Hislop that the editors would be absolutely pissed. The two of them set off to the Mirror office, where they joined the party.

Hislop stuffed the dummy of Not Private Eye in his jacket, but Cook wanted satisfaction.

He called catering and ordered a bottle of champagne, then had the Mirror photojournalist take a shot of them in Robert Maxwell’s London office.

Naturally, Cook scrawled ‘Hello Captain Bob’ on the window in crayon. He left a message with Maxwell’s office in New York.

Once Robert Maxwell got the message, he called security in London and had them thrown out of the building.

Private Eye used the dummy to claw back its position on the shelves in WHSmith’s. The magazine made the case that the dummy was much more libellous than its own content.

By the time of his death, Maxwell may have issued more libel writs than any other person in British history.

And the Eye had done more to welcome those writs than any other publication. They fought Robert Maxwell while others cowered.

The Politics of Satire

Despite the reputation of Private Eye, the Eye’s founders were not all political subversives.

Christopher Booker himself was a Thatcher fanboy and later became a climate change denier.

Similarly, Richard Ingrams voted Labour in the 1960s and early 1970s before switching his allegiance to the Tories from 1979 onwards.

Ingrams was also not shy about his opinion that the gay rights movement is ‘wrong’ to try. He thought it was a mistake to try and make homosexuality a “political issue”.

Richard Ingrams also claimed that the gay community does not exist and therefore does not face oppression.

Waugh was quite happy to play up his image as an overzealous reactionary. Sometimes this included making what he called “Jewish jokes.”

Private Eye ran a section called ‘In the City’ which focused on scandalous conduct in the UK financial sector.

It was a fine idea to shine a light on crooked businessmen, yet the focus seemed to follow Jewish businessmen in particular.

Ingrams was defensive. He argued that there just happened to be a lot of Jews working in the City and therefore a lot of financial crooks turned out to be Jewish crooks.

Satire is often a conservative force in society, not least because it is defined by its targets. A certain amount of kicking helps maintain the status quo.

Attacking corruption is one of protecting the system.

Today, Private Eye would not dream of running racist jokes or anti-vaxxer conspiracy theories. This is surely a good thing.

The magazine is now much more comfortable lambasting fake news and Brexit.

Yet Private Eye’s role was never really to challenge the establishment head-on. The limits of its project to combine muckraking with dirty jokes should be clear by now.