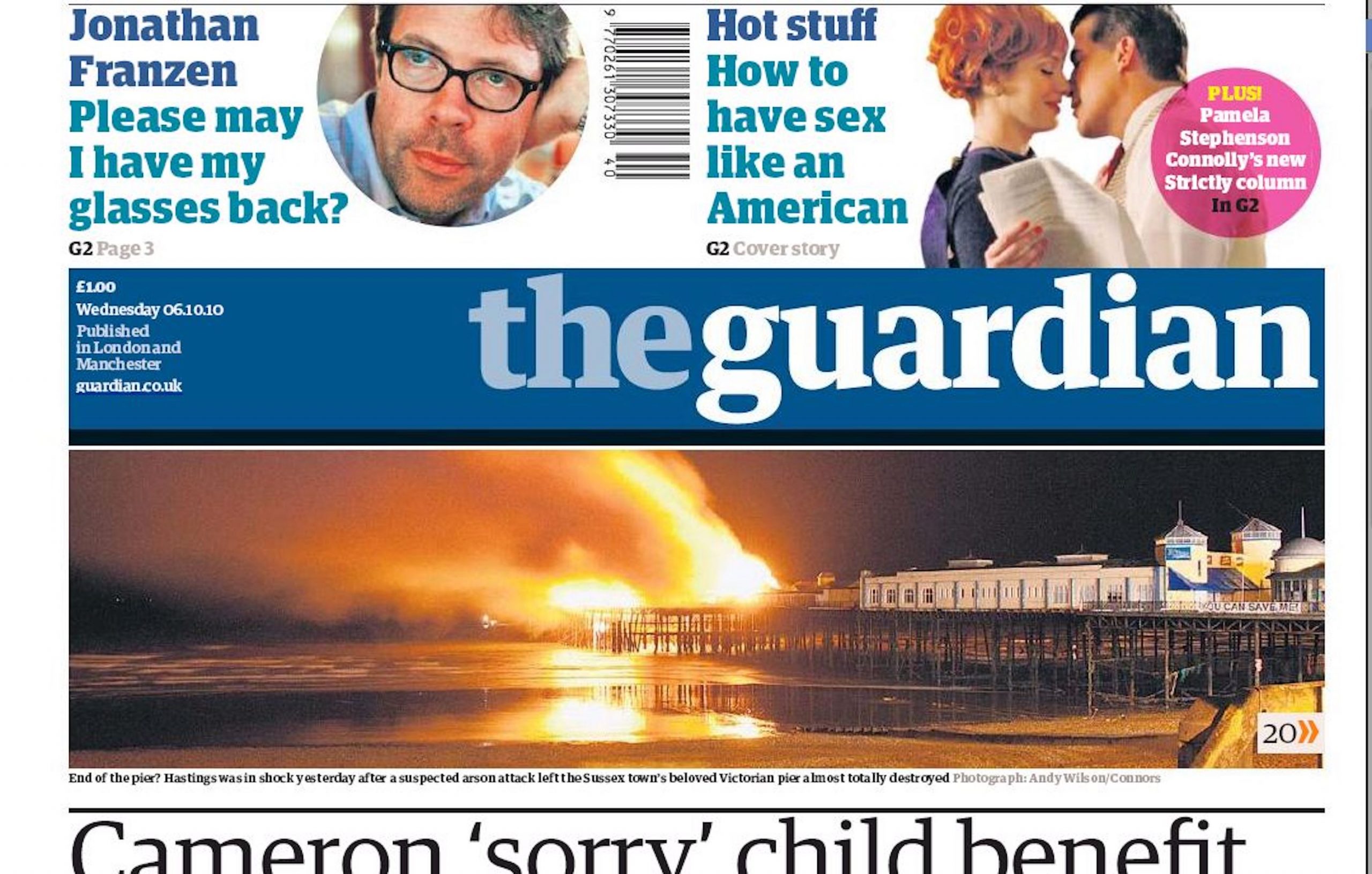 Not a Leftist Paper

The Limits of The Guardian

Armed with power drills and angle grinders, The Guardian’s deputy editor Paul Johnson and two other journalists set about dismembering their computers.

Two technicians from GCHQ stood and watched. This was a matter of national security, apparently.

It’s harder to destroy a computer than you might think. The trio used angle grinders to ‘shave’ away at the hard drives.

And then they drilled holes through the drives storing highly sensitive files. It took more than three hours.

The British government had just forced The Guardian to destroy its hard drives out of its spiteful rage against Edward Snowden. The Snowden files had caused a great deal of embarrassment for the powerful.

The government threatened legal action if the Snowden files weren’t surrendered, or destroyed.

Faced with this dilemma, Rusbridger chose to smash up the computers and grind the drives into dust.

It was not an easy choice for any editor to make. However, that day in July 2013 was a turning point.

Ever since then, The Guardian has been very cautious about certain stories.

The UK newspaper has moved away from running high-risk investigations, clashing with the intelligence establishment and working with whistleblowers like the ex-CIA employee.

Instead, it runs more lifestyle journalism and even stories about what it’s like to live as a wild turkey.

Meanwhile, the political coverage has shifted to self-destructive alarmism and the range of views of the paper’s op-eds has become much more narrow over time.

The sad truth is that The Guardian is more comfortable with the status quo than its writers and readers like to think.

Furthermore, this has always been the case.

Over the last four decades, The Guardian has carved out a position of convenience in the UK media landscape.

The newspaper has a progressive following and a middle-class base. Despite its falling print circulation, the paper has been able to reach millions online.

Like all news platforms, The Guardian plays to its audience. The liberal periodical provides more than just the facts, it inspires both dreams and nightmares.

Yet the paper prefers to see itself as the provider of political analysis grounded in the truth and evidence.

On the one hand, The Guardian was a crucial newspaper for the Remain campaign promoting the cause of open borders.

On the other hand, the same newspaper was content to demonise Jeremy Corbyn and help stoke the fragmentation of the Labour base.

This helped divide the Labour Remain vote while pressuring Labour into backing policies that split the party’s Leave base at the same time.

The result was a landslide victory for Boris Johnson.

Even though The Guardian called on its readers to hold their nose and vote Labour in December 2019, the damage was done.

It was too late to reverse years of misleading reportage and even worse political commentary.

Unfortunately, too many liberal Remainers hated Jeremy Corbyn so much that they were happy to risk a Tory hard Brexit deal. And now we are all paying the price.

The worst offenders will never own up to the part they played in damning the UK for the next decade.

The right-wing press played its usual part in trying to convince the British public that the vegetarian MP for Islington North was, in fact, an Islamist sympathiser with connections to the IRA, Hugo Chavez and Communist Czechoslovakia.

This is what you should expect from the gutter press in the UK. And yet The Guardian, which prides itself on being different, was not much different.

The liberal flagship ran misleading claims about the Corbyn leadership – particularly when it came to Antisemitism and Brexit.

In fact, The Guardian ran more inaccurate stories on Labour’s anti-Semitism scandals than The Sun and The Daily Mail, according to one 2018 study by the Coalition for Media Reform.

Whenever Jeremy Corbyn made overtures to the hard Remain camp, The Guardian framed the coverage in favour of Keir Starmer.

Later, the newspaper would effectively back Starmer to become Labour leader.

In many ways, the paper is still where it was in the Blair era before the War on Terror began.

The Guardian favours a progressive centre-left government with all the right qualifications – respectable presentation, good manners and a moderate sensibility.

The problem is that the world has changed.

Fast forward to 2020: The Guardian is still soft on Keir Starmer despite expressing some reservations.

If we think of the British mainstream media as a spectrum, it is quite narrow. There are very few places for a left-wing person to turn in the British media market.

There are, at most, two or three liberal or progressive newspapers in the UK and many more right-wing newspapers.

The Daily Mirror and The Guardian are just a couple of newspapers that usually support Labour come election time. However, the Mirror is the only consistent pro-Labour newspaper in the UK.

Historically, The Guardian is closer to the tradition of the old Liberal Party than Labour, and its later successor, the Liberal Democrats.

Many Guardian journalists were supporters of the SDP breakaway that helped keep Thatcher in power in the 1983 general election.

Many Guardian and Observer journalists also sympathised with Change UK.

It looked like history repeating itself, but it turned out tragedy precedes farce. The attempt to build a new centrist formation failed, but the media class never asks itself difficult questions.

They Just Are The Establishment

During the New Labour years, The Guardian was able to position itself as a critical supporter of the Blair government.

Meanwhile, The Observer, its sister paper, went much further and ended up backing the Iraq war.

Observer columnists David Aaronovitch and Nick Cohen became two of the biggest liberal cheerleaders for the 2003 invasion of Iraq.

Aaronovitch has since moved on, but Cohen is still at The Observer. The Sunday paper is still vociferous in its hatred of the so-called ‘hard left’.

What was seemingly different about The Guardian was that there was always some space for dissent.

Seamus Milne edited the Comment is Free opinion section for many years before it was handed over to Jonathan Freedland. (It now bears the more standard “Opinion” heading, while retaining the old title as a tagline.)

Milne helped maintain a space for the left to make inroads into mainstream commentary while keeping the establishment figures on side.

The paper would come to run scathing criticisms of Milne and his approach to media strategy. This was about more than the fact that Milne’s politics never fit in with The Guardian and its social base.

Labour socialist MP Tony Benn once wrote that The Guardian “represents a whole batch of journalists, from moderate right to moderate left – i.e. centre journalists – who, broadly speaking, like the status quo”. This is still true.

“They like the two-party system, with no real change,” wrote Benn.

“They’re quite happy to live under the aegis of the Americans and NATO; they are very keen on the European Union because the Commissioners control everything.”

“They are very critical of the left, but would also be critical of a wild right-wing movement. They just are the Establishment,” Benn stressed. “It is a society that suits them well.”

Tony Benn on the Guardian (in July 2008) ‘They just are the Establishment’: pic.twitter.com/YM1oQIioYD

It’s worth remembering that The Guardian called on its readers to vote Tory rather than vote Labour in 1951. This was after the Attlee government had built the welfare state and with it British social democracy.

Under Wadsworth’s tenure, The Guardian even opposed the creation of the NHS. This is why Benn was not wrong in his assessment of the paper.

“I should think that probably most [Guardian journalists] send their kids to private schools,” wrote Benn.

“I should think a lot of them don’t use the National Health Service, but they tolerate it as the price you have to pay in order to keep the populace content.”

“They’re not interested in me any more because they don’t think I have any power,” Benn added. “I can’t say I’m very interested in them, except as exhibits in a zoo.”

It’s not a coincidence that the liberal paper viewed Corbyn as a threat. In many respects, Corbynism was an outgrowth of Bennism. But this is not very far from nationalist populism for many Guardian writers.

The irony is that the newspaper of British liberalism is incapable of even supporting the kind of change it needs to achieve liberal ends.

The Guardian would rather not take the risk of radical change because it might make the situation worse. This is unforgivable in pre-apocalyptic times like these.

The liberal media class has not woken up to the reality that there has been a paradigm shift. The UK is not the country it was before 2016 or before 2001.

Every year we are more dystopian and less free. Nevertheless, status quo liberals are still repeating the same mantras from the 1990s:

History ended with the Berlin Wall coming down. Liberal capitalism is the best way to organise society and support democracy.

All we need is moderation and compromise, and ‘the facts’, and everything will work out, etc. You’ve heard it all before.

Brexit and Trump proved this game is over. The form of centrism, dominant for the last twenty-five years, is no longer viable.

The centrists can either reinvent themselves or become irrelevant.

It’s unclear what The Guardian editors think they are guarding anymore, except maybe an idea of the past.