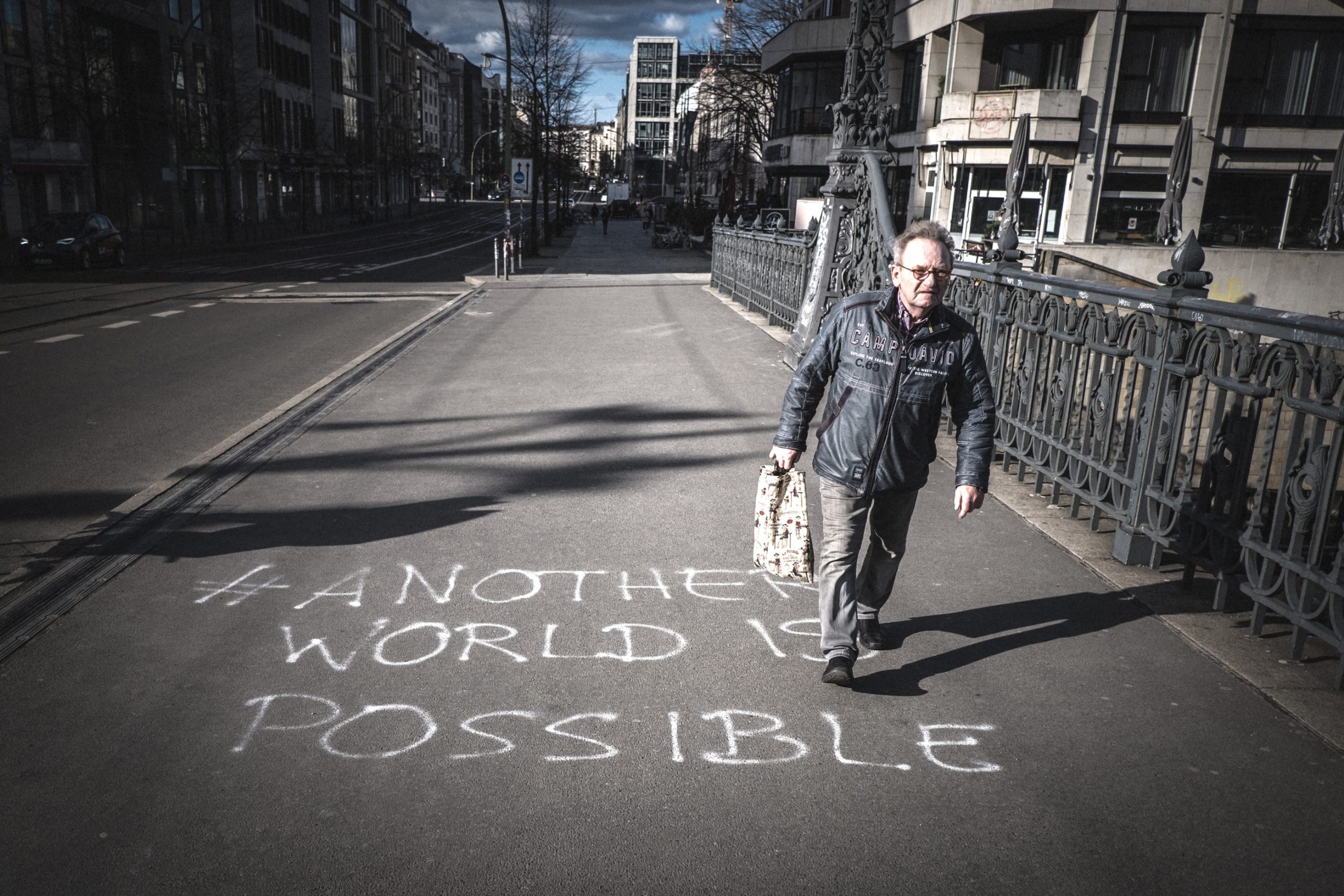 The Market or Else

Shutdown: How Covid Shook the World’s Economy, by Adam Tooze

In Shutdown: How Covid Shook the World’s Economy, Adam Tooze cites a fund manager’s assessment of the difficulties facing traders when the pandemic blew up in March 2020:

“The average trader on Wall Street is inexperienced, can’t take risk, and now can’t communicate with colleagues properly…They’re isolated at home in their sweatpants…Psychologically it’s a bad situation.”

It stands quite nicely as a vignette for the period as a whole.

And if it is hard to evince any sort of pathos for the would-be Gordon Gekkos of this world hunkered down in their sweatpants in front of oversized monitors perched on their kitchen islands, the underlying metaphor tracks.

Covid was not unprecedented. Human history is replete with instances of plagues and pandemics.

If the outbreak of influenza that killed some 50,000,000 people worldwide in 1918-19 is not within living memory, it is at least sufficiently proximate to our own time as to allow us to see the continuities between then and now.

The novelty of the current crisis, as Tooze points out, is the synergy between the pandemic and the systemic financial and political crises that have defined history since the turn of this century.

Thus, the story is not merely the human carnage wrought upon Lombardy, but also the increase in spreads between Italian and German bonds to which it gave rise.

Tooze’s last outing, 2019’s Crashed, provided the most comprehensive history of the outbreak and consequences of the 2008 financial crisis that one volume could conceivably contain.

Readers overwhelmed by the astonishing volume of detail contained in its 700-odd pages might be forgiven for losing sight of the relatively straightforward central thesis knitting it all together.

The crash and its aftermath illustrated a fundamental transformation in the role of central banks and debt in an extensively interconnected modern world economy.

Crashed laid out the full spectrum of the overlapping crises and highlighted the cataracts of dollars required to bring the world system back into some sort of equilibrium.

Among myriad points of interest was the odd paradox between the discursive prevalence of neoliberalism and the necessity of outsized actions by central banks necessary to keep the institutions of the world economy alive and functioning.

The optimality of the market is the central dogma of neoliberalism. The situation in the world economy post-2008, in which its institutions have had to be floated on great wodges of fiat currency, seems out of plumb with that idea.

One might, of course, note at this point that even the most dyed in the wool neoliberals have long conceded that the market needs to be protected in a carapace of rules and regulations to defend it from the unruly democratic urges of the masses.

Fair enough. Neither perfection nor simple optimality is the same thing as robustness.

At the same time, the current state of things makes the idea that the self-clearing market is the best of all possible worlds rather a hard sell. The literary image of the invisible hand seems somehow inappropriate.

The voracious tendency of finance to devour money more properly recalls the image of the gigantic pit works at the beginning of Zola’s Germinal, “struggling to digest its meal of human flesh”.

The shock dealt to the market, no less than to all other areas of human life, by the advent and spread of COVID-19 once again cast these tendencies in relief.

The coronavirus was the mirror that flattered not, likewise exposing the fragility of the European nexus between the political and the monetary, and the wholesale dysfunction of the American polity in the age of Trump.

The European response to the earlier crisis had been to stay the monetary course, while shifting (to the greatest degree possible) the blame for the whole affair to the casino capitalism of the US real estate market.

One of the great virtues of Tooze’s Crashed was that it clearly showed the vanity of such a claim. The market for MBS was fully internationalised, with large volume flows moving in both directions in ways that defied straightforward application of what US Treasury Secretary Timothy Geithner liked to term “Old Testament” justice.

In the EU of the Spring of 2020, the need to come to terms with the economic effects of COVID-19 led to the traces of ECB (and Bundesbank) probity, first with the passive acceptance of using sovereign debt to spew money at the problem, and second with the creation and marketing of a species of Eurobonds to structure that debt.

The latter was the sort of measure that ECB presidents had been wont to claim would only happen over their dead bodies. But with the actual bodies of others piling up in cold trucks and other makeshift mortuaries, it quickly became clear that such niceties had to fall by the wayside.

The situation was more fraught in the United States, where the election of Donald Trump in 2016 had fired an already highly polarised national politics into an even higher state of fractiousness. Trump’s public mendacity had become the stuff of late-night comedy monologues.

But his willingness to lie, combined with his inability to maintain any idea (aside from his white nationalist idee fixe) in his head for more than a couple of minutes, meant that responding to a challenge whose consequences were, quite literally, life and death was always going to be a challenge.

Tooze often writes with the full measure of that British tendency to understatement, as in the following passage: “Given the character of the Trump Administration and the extreme polarisation of American politics, an appropriate government response could not be taken for granted.”

This is a slightly deflationary description for a situation in which most thinking Americans were trying to decide whether to tough it out or to try and buy a parcel of land, perhaps in the wilds of Newfoundland or northern British Columbia on which to hide and watch the collapse of the republic.

Even in the darkest days of the early Trump Administration, it would have been hard to imagine the attempts to sideline Anthony Fauci, the country’s leading expert on infections diseases, in the middle of a pandemic, much less the publicly mooted suggestion that the innards of infected people might be scrubbed out with bleach.

Perhaps Trump’s earlier suggestion that nuclear weapons should be used against hurricanes ought to have clued in even his most benighted supporters to what sorts of things a serious crisis might bring forth.

And yet, somehow, many of the right steps were taken. The government managed to funnel large amounts of cash into the economy to keep businesses operating and workers eating. This was just as well.

The careening of the Black Lives Matter protests onto the nation’s streets was greatly enhanced by the fact that many of the protestors didn’t have to spend 40 hours of their weeks having their creative energies leeched out by their day jobs.

In retrospect, the willingness of Republicans to participate in propping up the economy with stacks of cash was not entirely surprising.

The party’s reputation for fiscal conservatism really only becomes operative when Democrats are the ones wanting to spend, as evidenced by the gargantuan tax cut for the wealthy engineered by Trump and his Republican associates earlier in the administration.

Normally, Republican fiscal largesse does not extend to the lower reaches of the income distribution.

But idle hands are the devil’s plaything and keeping workers employed had myriad benefits over and above the merely economic. If some of these workers had to be sacrificed by being compelled to work public service jobs while the coronavirus was still rampant, well, sometimes necrocapitalism is not a pretty business.

The differences in terms of outcomes between the EU (taken as a whole) and the United States illustrated another underlying truth of the pandemic: actions to stop the spread tended to be more effective the earlier and more decisively they were undertaken.

Thus China, Korea, and Germany fared relatively well. By contrast, India, Brazil, and the United States provide to be incubators for further varieties of the disease by their unwillingness to do the things that reason (and science) dictated.

Shutdown is a fascinating book, but readers should know that the focus is mainly on economics (as the title would suggest).

Those looking for extensive discussions of the processes involved with disease-fighting itself, rather than on measures taken by governments to keep their economies functioning in the face of crisis, will find less of interest.

On the other side of the coin, Tooze’s grasp of the fact of the (financial) case is typically expansive and this is yet another in his series of historical works of obsessive thoroughness.

The world is changing, particularly in terms of how debt is viewed and how economic crisis-fighting is undertaken by governments.

Tooze is at the forefront of tracking these changes. This history of the COVID-19 crisis, which is certainly not yet over, is essential for understanding not just where we are, but the direction in which things are moving.