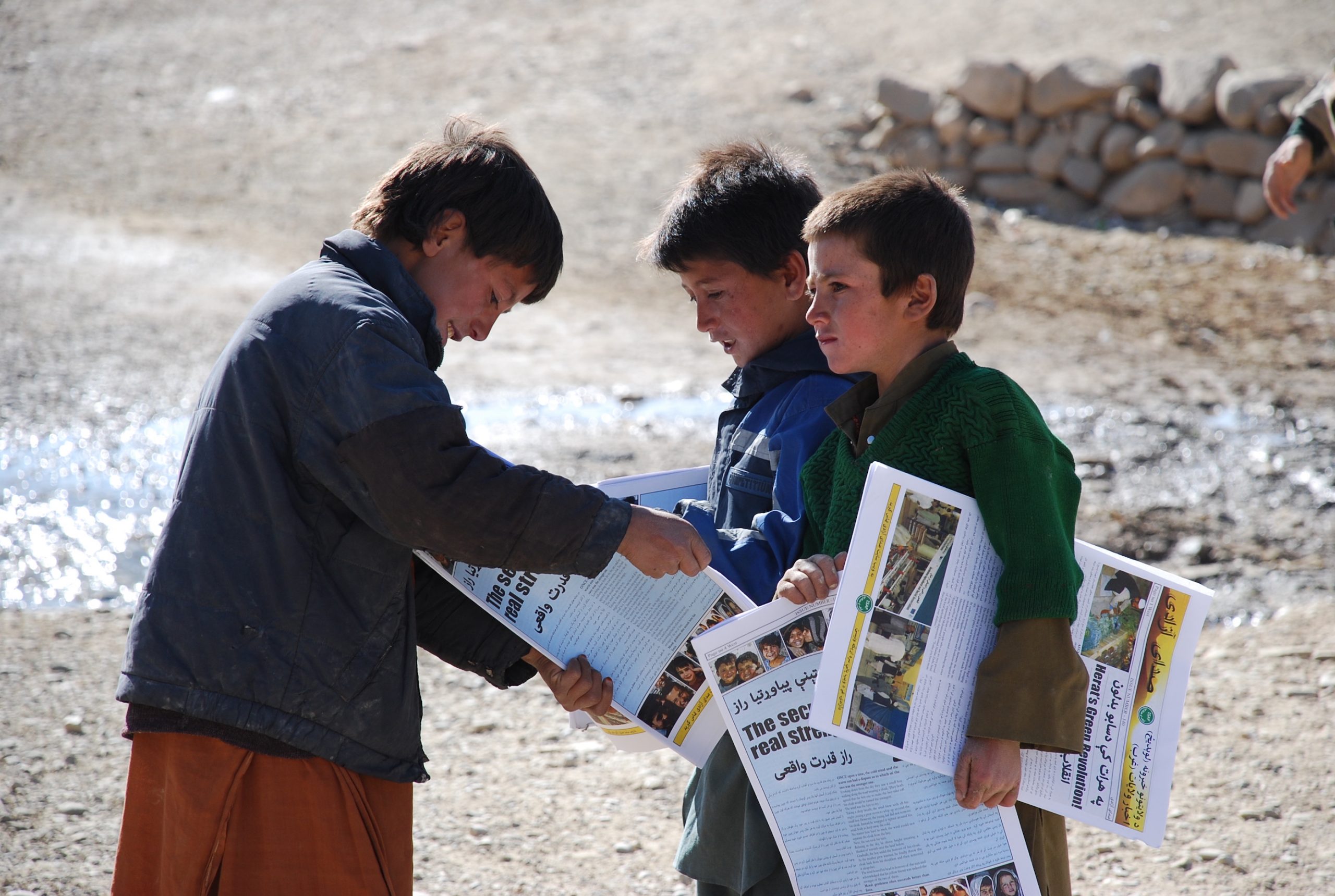 Afghanistan and the Press

Throughout the US war in Afghanistan, Western media framed the conflict in terms that suited the governments of the day.

As Washington drew down its forces, the international press turned on the White House, lambasting President Biden for ‘abandoning’ the country and ‘betraying’ the cause.

The British news media was no exception, filled with commentaries from such figures as Johnny Mercer and Dan Jarvis. Men with formidable jawlines. Men who know how to wield guns against foreigners. Men who know about Afghanistan.

“Obviously it’s a total betrayal,” said Mercer in an interview in the Evening Standard.

“It’s worse than that because out of all the emotions you felt over the last 20 years of these campaign(s), defeat and surrender wasn’t really one of them. So it’s kind of new territory.”

“It all feels so pointless now,” he added.

Plenty of ex-soldiers who served in Afghanistan want to believe that their service, and their sacrifice, was worth it. Otherwise, the war veterans face an inevitable question.

“So, was it worth it? If Afghanistan continues on its current trajectory, then my honest but heartbreaking answer is no,” Jarvis wrote in The Guardian.

“It has been clear for some time that a military victory is not possible but that does not mean now is the time to throw in the towel,” he argued.

“If we do, it will not only represent a betrayal of our own interests and sacrifices, but of the Afghans.”

Much of the British media has framed the Afghan war in terms of how it affects ‘our boys’. The same has been true of the US withdrawal.

We are supposed to be aggrieved because of a pointless waste of British lives, but we cannot question the invasion.

Now we’re encouraged to sympathise with the Afghans who worked with the occupying forces.

However, the media refuses sympathy for the Afghan civilians trying to flee the Taliban. It’s almost as if there are deserving and undeserving Afghans.

Few British media outlets have reported on the history of Afghanistan.

There are occasional references to the Mujahideen resistance to the Soviet Union, as well as the Anglo-Afghan wars, but little critical reflection on our own extensive history in the Central Asian state. And for good reason.

Despite all of its disadvantages, Afghanistan was the only country to successfully resist British imperialism in the nineteenth century. The British were chased out of in 1842, in a humiliating and devastating defeat.

Historian William Dalrymple compared the 1842 Afghan victory to the Battle of Britain, the Battle of Waterloo and Trafalgar, all in one. This was the significance of the victory over the British Empire in Afghan history.

And yet the British have forgotten the First Anglo-Afghan War. It’s as if the UK never had a war with Afghanistan until it followed the United States into battle in 2001. But before then, the British army fought several times in Afghanistan.

A young Winston Churchill took part in the Siege of Malakand fighting against the Yousafzai. The whole point of the siege was to preserve the Durand line drawn through Pashtun tribal lands.

After the siege, the British army launched the Tirah campaign against the Pashtun villages living on the North-West Frontier (today the Afghan-Pakistan border). Many of the villages were torched.

The British Empire was not interested in Afghanistan in itself but because of the country’s neighbours: Russia, China, India and Iran. This is still the case today when US war planners look at Afghanistan.

Furthermore, the British elite feared that the Russian Empire would expand its influence to Afghanistan and challenge British dominance in South Asia. Regional tensions still help define what happens to Afghanistan today.

China, Russia and Iran were quiet supporters of the 2001 US invasion. Skip forward two decades, and Beijing, Moscow and Tehran have all accepted Taliban rule as inevitable in the wake of US occupation.

Frequently blamed for “paid” terror attacks on US forces in Afghanistan during the ‘00s, in much reporting on their acceptance of the Taliban victory, the Russians are all but credited for it.

The  Chinese don’t come off any better. Even in the Financial Times, a paper otherwise known for its caution, Beijing is decried for leading the Taliban’s rebranding effort.

China, of course, is exacting a heavy price for its backing. But, there’s no escaping the implication that it had much to gain from an Islamist victory over the NATO alliance.

The War is Never Over

The United States had twenty years to build a modern, functioning state apparatus that could hold its own against a band of rag-tag reactionaries.

However, all it accomplished was to help the Taliban consolidate its control of the country and sell themselves as rational conservatives who have the right to rule.

That’s an enormous failure on the part of the United States.

What did Washington actually achieve during these two decades?  Nothing but a fictitious government in Kabul that evaporated faster than the Soviet-backed socialist state first established in 1978.

Even the Democratic Republic of Afghanistan lasted until 1992, collapsing three full years after the USSR withdrew – not three months after an announced withdrawal.

Predictably, US failings have drawn all sorts of historical comparisons in the press.

But there are many crucial differences with Vietnam. Not least that the communist Vietcong are in no way comparable to the Islamic extremists in the Taliban.

Nevertheless, the imagery is evocative of a colossal defeat, one which the United States, in particular, has not experienced since the mid-1970s.

Even more so, the photographs of Taliban fighters intentionally carrying their flags in a similar pose to the US Marines raising Old Glory on Iwo Jima, in 1945.

The narrative is that Washington is letting ‘the boys’ down again and that the people who had fought and died in Afghanistan have been ‘betrayed’, just like in Vietnam.

The assumption, of course, was that the United States was engaged in an ideological war in Afghanistan, to cure it of terrorism by turning it into a liberal democracy.

That was the neoconservative justification for the invasion, back in 2001. They said the same about the invasion of Iraq. Neither would come to fruition.

The truth is quite different. The Bush Administration backed the invasion because it was out for revenge, not justice.

The US wanted to kill Osama Bin Laden and pulverise the regime that hosted him, to make itself look better, after having been caught by surprise by the 9/11 attackers.

Thus, Washington ignored Taliban offers to extradite bin Laden and to surrender. That wouldn’t win its deterrence back. War was a better face-saving operation.

None of this is exactly new news. Even former US President Donald Trump understood that the Afghan war was illegitimate and beyond purpose.

That’s what makes the UK media’s handwringing about the US-led withdrawal so troubling. Why criticise it? To apologise to Tony Blair, for press criticisms of his decision to support Bush?

The best one can do is surmise that keeping the War on Terror aflame has its own benefits, particularly in the context of Brexit, and its promotion of imperial nostalgia.

Better not to remember the price of empire, and its failure, than to own up to the fact that it never works, even when run by the Americans.

The Western media loves to pretend that the war was waged to liberate Afghan women.

Read any account of the plight of Afghan women in The Guardian since the Taliban victory, and it would be hard not to read that between the lines.

The fact that NATO sided with Afghan warlords who considered rape a matter of policy is conveniently absent from such reporting.

The Revolutionary Association of the Women of Afghanistan (RAWA) is one of the most courageous organisations in the world.

RAWA opposed the USSR invasion, resisted the Mujahideen, and later the Taliban as well.

The suffering of Afghan civilians, particularly women, has often been used as a prop for the pro-war camp, particularly America’s onetime ‘liberal hawks’, who counted, among others, British ex-pat journalists like Christopher Hitchens among their ranks.

By some estimates, NATO forces killed more than 70,000 people in airstrikes in Afghanistan and half of those people were women and girls.

Hamid Karzai was much more interested in lining the pockets of his ministers than securing development for a society ravaged by war.

Even when Ashraf Ghani took over from Karzai, the hopes of a modern liberal Afghanistan were not realised.

This is because those hopes were never genuine. The 2001 invasion was merely a revenge mission and the talk of humanitarian intervention was just talk.

The original war aim of catching the 9/11 mastermind was dropped once it was clear that he had got away.

Instead, the new aim was defeating the Taliban and building a modern democracy in Afghanistan.

American troops made short work of the Taliban and captured Kabul a month after the invasion began.

Much like the US war in Vietnam, the aims and justifications for the conflict kept changing with the times.

The fighting continued in the absence of any coherent aims despite growing Vietnamese resistance and American civilians protesting against the war.

The old saying that Afghanistan is “the graveyard of empires” is a cliché because it has more than a scintilla of truth in it.

Sadly, the reasons why the US and the UK invaded Afghanistan have not changed. This war is over, but another one may very well follow. After all, it always has.