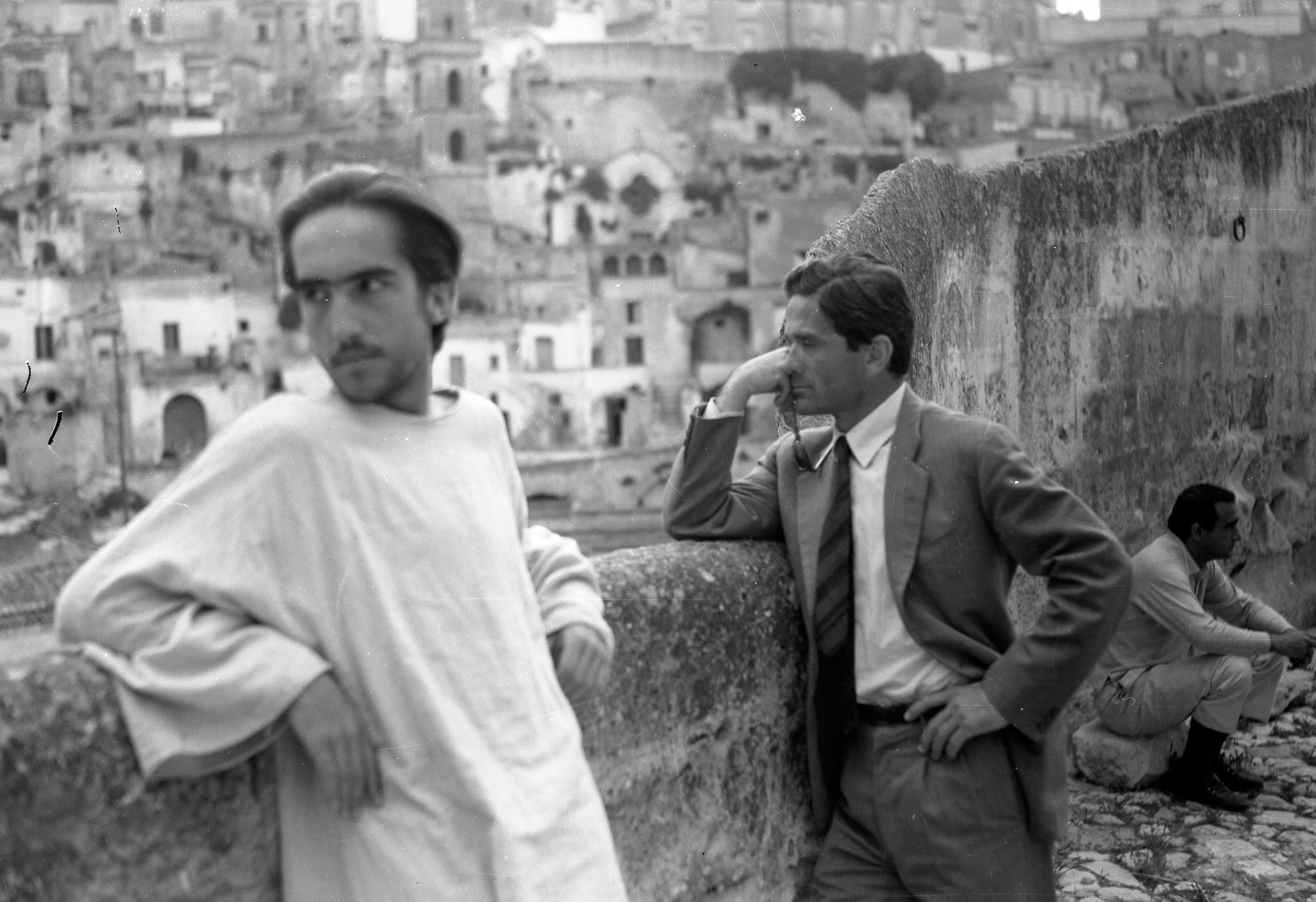 Prayer to Pasolini, by John Waters

Though short – the entire digital recording clocks in at seventeen minutes – and somewhat haphazardly put together, John Waters’ Prayer to Pasolini makes a meaningful contribution to cinematic history.

Released to celebrate the filmmaker’s seventy-fifth birthday this past April as part of Seattle-based Sub Pop records’ monthly singles club, the record pays homage, not only to the genius and courage of the late Italian filmmaker Pier Paolo Pasolini (1922-1975), but to an era when shock value had yet to be devalued by the Internet.

Prayer to Pasolini opens with Waters’ “prayer” itself, a relaxed rewriting of the Lord’s Prayer and Nicene Creed that starts from the premise that Pasolini was a martyr without taking him or itself too seriously.

Waters does build to a sincere and forceful conclusion. Pasolini, he declaims, will return from the dead “to judge the censors, the fascists, and the fag bashers”. It’s a revealing list, reflecting not only the dominant political concerns of Pasolini’s era but those that shape ours.

Back in Pier Paolo Pasolini’s heyday, “fascist” could refer to ageing individuals who had benefited from collaborating with the dictatorial regimes of Italy, Germany, Spain, and Portugal and the temporary puppet states of World War II. The term was also used more loosely to designate anyone who seemed too invested in expanding the power of government over individuals.

Today, “fascist” continues to be used loosely in this way, usually by people who identify with the left or right against the centre. At the same time, it also refers to individuals who truly wish to revive fascism as a political program.

Interestingly, “fag bashers” have remained a consistent component of actually existing fascism since the 1920s, even though a good number of the people doing the bashing seem to be in the thrall of same-sex desire themselves.

Whether this has to do with anxiety about reproduction – sexual, social, and ideological – or some other form of unease, it is clear that anti-gay activities and fascism have a symbiotic relationship.

The third item in John Waters’ list, “censors”, has a different character. Although some of the people who worry about censorship identify it with fascism – though often the loosely defined sort – its usage transcends the traditional political spectrum.

It is hard for young people today – anyone under forty, honestly – to understand the impact that filmmakers like Pasolini and Waters had on popular culture in the 1970s.

They refused to shy away from aspects of everyday life that most of us are trained to avoid discussing and then coupled them, sometimes literally, with the depiction of practices that it has historically been forbidden even to think about, much less perform. Their films opened the eyes and ears of brave moviegoers to a realm of freedom.

This kind of liberation comes at a cost, though. Both filmmakers ran afoul of censors in the 1970s despite the fact that the decade was permissive to an unprecedented degree.

Indeed, it could be argued that the transgressive content their most notorious films featured was a necessary response to a world so “liberated” that moviegoers were very hard to shock.

After all, these were the years when pornography briefly acquired a sheen of respectability, with pictures like Behind the Green Door underscoring the potential artfulness of sexual representation. Films like Pasolini’s Salò, or the 120 Days of Sodom and Waters’ Pink Flamingos had to seek out new buttons to push because the ones that used to work were all jammed in the “On” position.

Because the Italian director made films within the context of a state-supported national cinema in which daring was celebrated, he was successful in ways that the young John Waters could never be. But then his life was cut short by a male hustler or, if you believe the conspiracy theories, shadowy forces that used that hustler for their own ends. His story ended in 1975.

Waters, by contrast, began as a filmmaker willing to go places even Pasolini feared to tread. In one of the interview clips included on Prayer to Pasolini, he wryly notes that, whereas the shit eaten in Salò was actually chocolate, the shit eaten in Pink Flamingos was literally shit.

Because he has lived to be a senior citizen, however, we have had the opportunity to witness Waters’ transformation into a comforting elder statesman of the cinema. Yet even as his own movies became progressively more mainstream, he continued to hold a torch for radicalism.

Although his last feature film, 2000’s Cecil B. Demented was a huge flop commercially and was dismissed by critics for not being sufficiently shocking, the plot testifies to John Waters’ loyalty to the aesthetic imperatives of his youth. An A-list Hollywood actress – played by A-list Hollywood actress Melanie Griffith – is kidnapped by a radical filmmaking collective, who get her to participate, Patty Hearst-style, in their guerrilla assault on conventional cinema.

By then, the vast quantity of films available for rental or purchase had largely made questions of censorship irrelevant, at least in the West. And the massive impact of Napster on the music industry was pointing the way towards trouble ahead for Hollywood. Waters’ approach to filmmaking, no matter how heartfelt, no longer resonated as it once had.

After Cecil B. Demented’s failure, John Waters focused more on solitary creative pursuits, such as making art, writing, and doing solo spoken-word tours. He recognised that, if his directorial efforts could no longer shock audiences, he might still have an impact by presenting himself as the once-outrageous and still-witty uncle who could tell stories about the good old days.

That is, by and large, what Waters has been doing these past two decades. Prayer to Pasolini is a perfect example. Part oral history, part film criticism, and always entertaining, the tracks on the Sub Pop release testify to the continuing vitality of the artist, even if his art no longer meets the measure of his time.

In one of the short fragments that follow the prayer itself, Waters speaks of the Italian filmmaker’s refusal to play by the industry’s rules:

He cast the way a lot of people did. It was sort of like a repertory group. If he found somebody he liked, he used them over and over. He used his boyfriends. He used handsome actors. He used movie stars. He mixed them all up. And he used people right off the street. He used people that weren’t actors that turned in great performances, too. I think that was his strength. The people looked so real in his movies, whether they were professional actors or not. And you really couldn’t tell the difference.

In the early 1970s, this blurring of the line between amateur and professional still felt important. But in our own era, when the most popular pornography is often the work of amateurs – or at least individuals who pretend to be – and anyone with a few thousand dollars to spare can set up a home studio capable of generating professional-quality footage, the challenge is not to present characters that feel real, but to explain why this quest for verisimilitude used to matter so much.

At another point in the interview portion of Prayer to Pasolini, Waters lauds the Italian director’s willingness to feature an actress who was not conventionally attractive. “Would an actress who looked like that get the leading role?” he asks. “Today they would have fancy movie stars get in body makeup to look like that.”

Waters finds this offensive, a sentiment he expresses in a manner that other people are likely to find offensive: ““To me, a fat suit is like blackface to fat girls.” Given that his most commercially successful work Hairspray turns on a two-fold push for integration, both racial and corporeal, Waters might wriggle free of cancelling. But the fact that he has managed to push a button that still provokes a response suggests that his investment in transgressive art may not be as outmoded as it initially seems.

In a world where billions of people use their mobile devices to appear as idealized versions of themselves and cosmetic surgery is growing more popular every day, maybe what we need is not the primal revulsion he conjured in Pink Flamingos, but a way of confronting the disgust we experience when we see our actually existing flesh. Pasolini would approve.