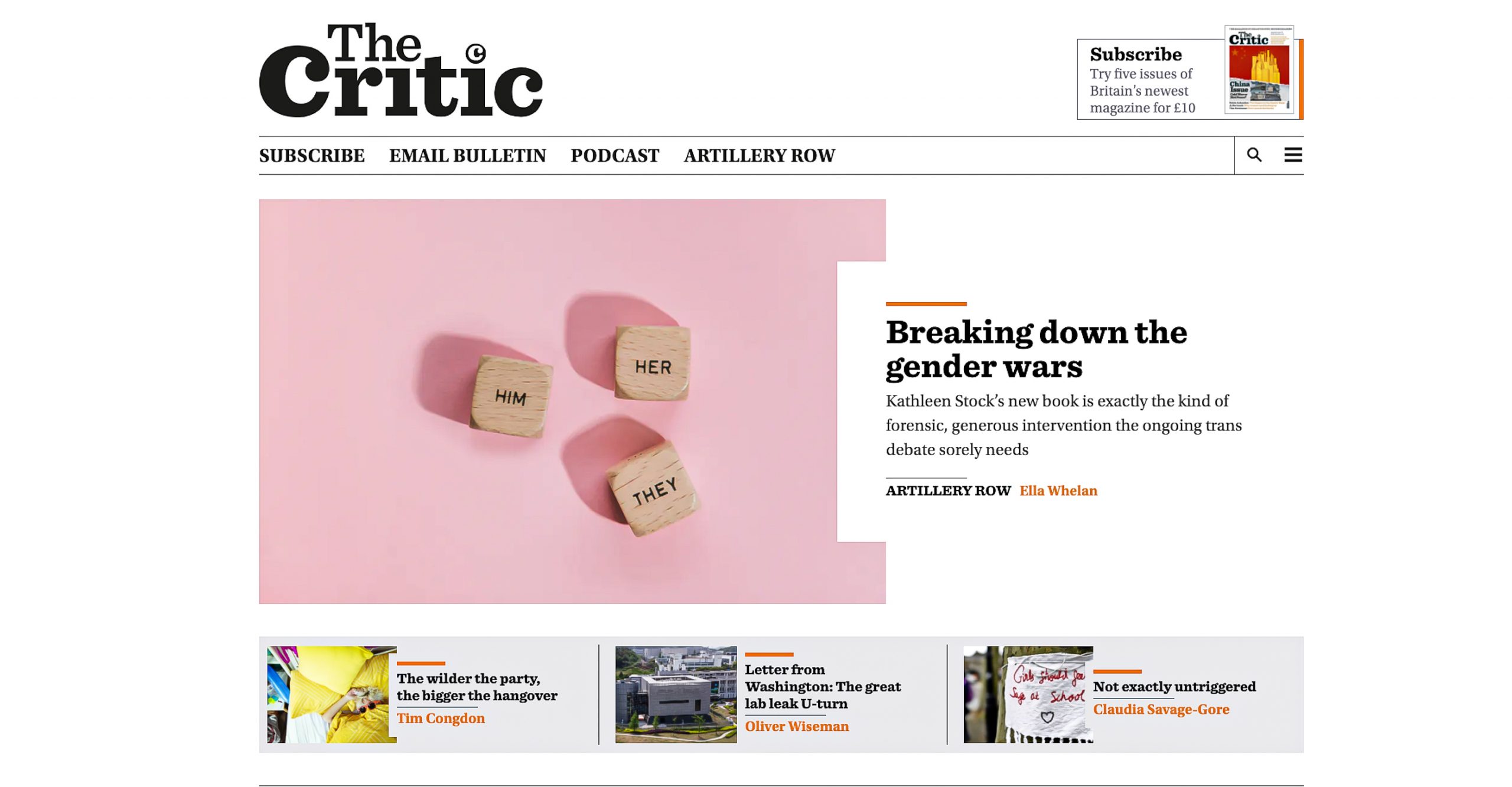 The British media landscape is where many of these people cluster, particularly in the right-wing alternative media ecology.

Publications like The Critic, Standpoint and UnHerd are safe spaces for anyone who thinks wokery has gone too far.

The Critic, as the name implies, defines itself as a bold contrarian outfit.

Founded by Tory donor Jeremy Hosking, the publication platforms figures such as Tory MP Steve Baker and veteran journalist Anne McElvoy. Are these really the voices of the unheard?

Meanwhile, UnHerd claims it gives platforms to the sort of people who (you guessed it) might otherwise be ignored.

That’s surely why it was launched by Conservative political adviser and Brexit campaigner Tim Montgomerie. That’s definitely why it publishes well-established neocon writers like Douglas Murray.

An older magazine, Standpoint began its unfortunate life in 2008.

Daniel Johnson, son of Paul Johnson, started the magazine to “celebrate” the values of Western civilisation. Of course, Johnson’s main preoccupation has been with the supposed threat of Islam to the West.

The threat is always over there or out there. It’s always someone else who is ruining the game. It’s not the game that is at fault.

A superb article from @fitzmorrissey in this month’s @StandpointMag – ‘In an age of stark ideological cleavages, Muslims are living through a battle of ideas over the meaning of religion in the modern world’https://t.co/Cz7CJTMdgC pic.twitter.com/9qLUgno16k

The flocking contrarians have long been convinced they are railing against the very ecology they thrive in. They like to pretend there is an oppressive left-wing hegemony in British media and culture.

Nothing could be further from the truth.

Apart from The Daily Mirror and The Guardian, most British newspapers are pro-Tory at election time.

This even includes The Independent, which is, otherwise, a left-liberal newspaper.

Again, the right likes to claim that the BBC, Channel 4 News and even Murdoch-owned Sky News are all ‘left-wing’.

We saw that this was not true during the Corbyn era, when all of these outlets joined in the right-wing smear campaign. The same was even true of The Guardian.

But, turn the clock back, and you will find that the right has been engaged in a false rebellion for decades.

For example, British comic writer Kingsley Amis appeared on William F. Buckley’s Firing Line in May 1970, along with fellow angry old man John Braine, to bemoan the struggle against the left-wing consensus.

“The attraction of being a young leftie militant is that you have it both ways. You’re an embattled minority and have all the flatus of being a rebel of some sort, but you’re also surrounded by people who think the same as you,” said Amis.

“So you’re a conformist who is also a rebel, which is a very happy position to be in,” he concluded.

Yet this is an almost perfect description of Amis’s own position in 1970.

Amis had grown out of his youthful flirtation with Communism only to end up supporting the US war on Vietnam in the 1960s.

The author of Lucky Jim (1954), acclaimed for its criticisms of British provincialism, sided with the most powerful government on Earth, claiming he was fighting a lonely struggle.

The novelist convinced himself that his support for the war was somehow a bold, courageous decision. Kinglsey Amis even thought he was some sort of independent-minded renegade for doing so.

This may have been true at the dinner parties Amis was used to frequenting, but it was not true in the centres of real power.

The right has to insist it is independent-minded. Individualism is a core part of right-wing ideology.

Even conservatives who believe in some restraint on market forces believe in the idea of the individual as a free, almost atomic entity.

The idea that the right is collectivist and acts to shore up the system is incomprehensible. Not least because right-wingers tend not to believe there is a system in the first place.

Secondly, the problems of society can have no systemic or historic explanation.

Instead, the problems are always down to outside forces: illegal immigrants, the left, Muslims, benefits claimants and sometimes corrupt elites.

However, even right-wing complaints about corruption are a defence of the existing order. Everyone thinks they are a free thinker, which suggests that most people are not.

Kingsley Amis got lost in his booze cabinet and decided he was special for doing so. Amis was not the first phoney rebel, nor will he be the last.

Pet contrarians in the British media are almost all right-wing for a simple reason. All of the permissible targets of derision are progressive.

Many Guardian columnists have been taking apart the Tories for years, yet the same columnists spent five years spreading vile calumnies against Jeremy Corbyn.

The contrarians are shaped by whatever they oppose. This is how their position is predetermined.

By contrast, the nonconformist is in a genuine position of defiance against the powerful.

There are no more predictable creatures than herd writers like Brendan O’Neill and the Spiked crowd.

O’Neill calls himself a ‘libertarian Marxist’, but even the first half is not quite true. He takes conservative positions on immigration, gender and topics like gay marriage.

It’s not just that O’Neill is predictable. He even regurgitates his own material. Novara Media pointed out in February 2020 that O’Neill essentially uses the same template for some of his articles.

“Here’s a tip for rappers. If you’re being praised by John McDonnell, Baroness Sayeeda Warsi, the Guardian and every middle-class tit on Twitter, you’re doing something wrong. Yes, Dave, this is about you.”

“Here’s a tip for grime artists: if you find yourself being cheered by The Guardian – surely the squarest, whitest, most privately educated publication on this island – you’re doing something wrong. Yes, Stormzy, that includes you.”

“Here’s a tip for political activists: if your rabble-rousing echoes the behaviour and ideas of Islamists, then you’re doing something wrong.”

That’s right. The real working-class people are the white guys accepting generous subsidies from the Koch Foundation to rewrite drivel at Spiked about the threat of uppity black musicians and the middle-class woke intelligentsia.

We’re supposed to believe that the left dominates UK media culture, while the right has a stranglehold on almost all institutions.

Indeed, the growth of alternative right-wing news media continues to reinforce this power imbalance. Fortunately, some of us are fighting back.

Screenshot courtesy of The Critic. All rights reserved.