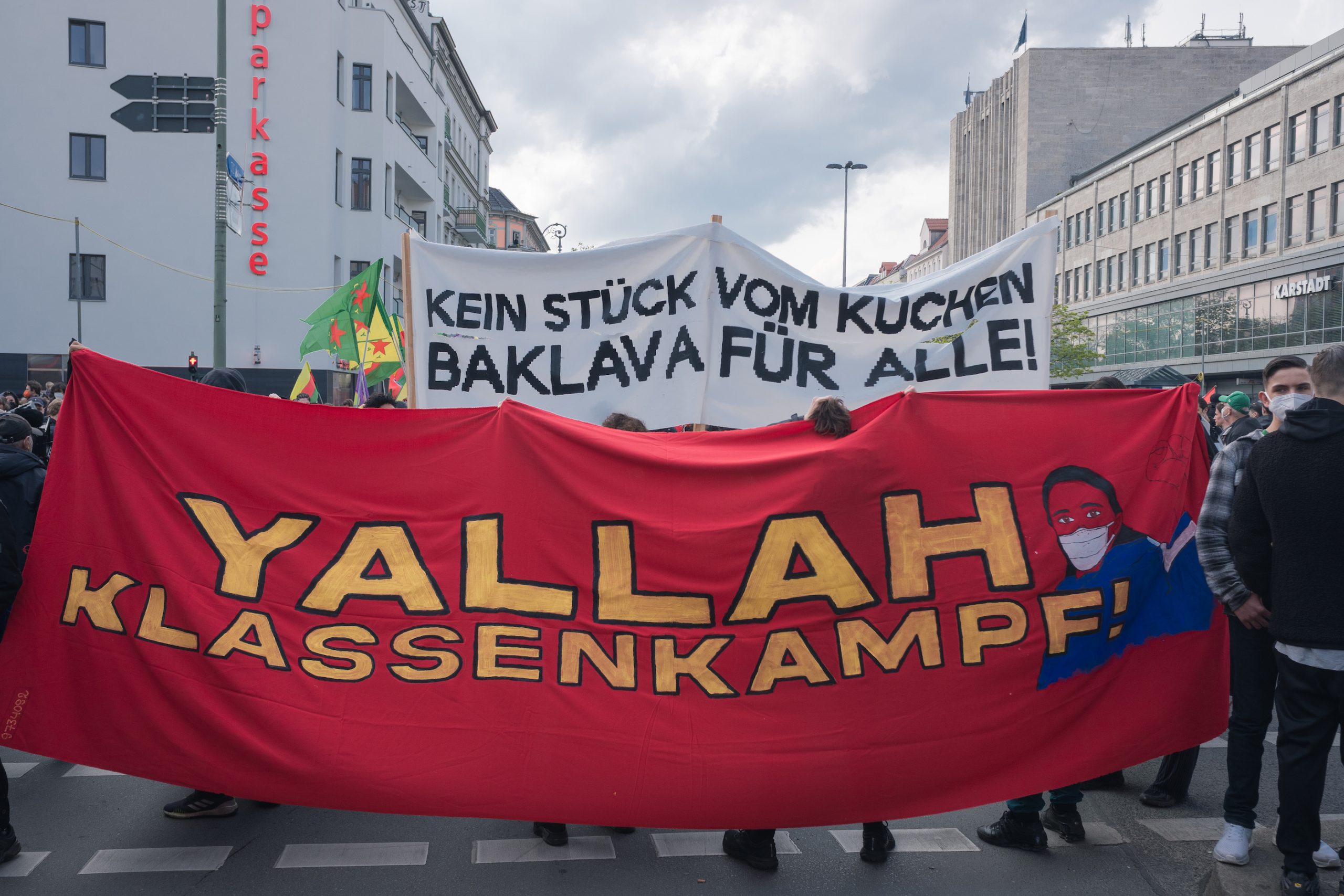 Diversity is a class issue. Karl-Marx-Straße, May Day.

May Day in Neukölln

The language was a victory by itself. Seeing the word “Yallah” spread across Karl-Marx-Straße, was like living in the best of all possible worlds.

For people from the Middle East, the Arabic word for go is laden with all sorts of positive connotations. It implies movement, mobility, freedom.

Set against the name of Karl Marx, it also implies equality, democracy, revolution. Juxtaposing the two is like mixing East and West, the Occident and the Orient.

Much like the neighbourhood that Karl-Marx-Straße runs through, the heavily Middle Eastern Berlin borough of Neukölln, which I call home.

The addition of banners like “Baklava for all”, to the May Day 2021 march served to underline the social significance of this mix.

Few neighbourhoods in Germany are as derided for their poverty as Neukölln. What better a symbolic currency than the honey and filo dough pastry.

This was German willkommenskultur (welcome culture) at its best.

Granted, the people doing the May Day welcoming were likely foreign-born, like me. Still, this was a big reason my partner and I have spent ten years in Neukölln.

In between the hummus and döner places, the familiarity of the languages (Arabic, English, Hebrew and Turkish are all common here) and leftwing street politics, the borough was a cosmopolitan ideal.

Now, approximating London neighbourhoods like Shoreditch in terms of cost, much has changed. Except for the diversity, and the determination of the area’s residents to not get turfed out.

Whether it be by rich British ex-pats or German Nazis firebombing local businesses, the pressures to cleanse “Kleine Palästina” (Little Palestine) or “Little Gaza Strip”, as an American friend once called it, are intense.

Needless to say, I’m honoured I’ve had a chance to live here. Though I’ve resided in other Middle Eastern neighbourhoods in Europe, nowhere have I felt at home like this. Nor in an area as organically suited to my interests, either.

A journalist who trained writing about the Israeli-Palestinian conflict, all I have to do is walk outside my door and there’s something to report on, that’s relevant to my current beat, Europe.

The PKK banner, in the photograph above, is a case in point. Few crises are as politically significant today as that befalling the Kurds.

Though one of many ethnic groups subject to violent repression, the community’s leftist ideology, in Turkey and Syria, is a vanguard politics for the West, as much as it is in the decidedly unprogressive Levant.

The fact that the Turkish PKK remains outlawed as a terrorist organisation, in the European Union, while EU member states and the Americans, support the more valorised YPG/YPJ in Syria, is a problem.

Yes, Turkey is a NATO member and needs to be respected. But, in the last decade, the Kurds, on both sides of the Syrian border, are looking a lot more Western and democratic than Ankara is.

“Of course you have a hard-on for the Kurds,” an Iranian acquaintance said to me, in a moment of spite. “You’re Israeli, and your country uses them to subvert Muslim regimes,” he added, referring to Israel’s history of supporting Kurdish guerillas in Iran and Syria.

Benjamin Netanyahu’s highly publicised humanitarian assistance to the Autonomous Administration of North and East Syria, following Turkey’s October 2019 invasion, was better PR for Israel than it was for the Kurdish-led government.  The Kurds are a “gallant” people, said Bibi.

So, I shouldn’t have been surprised. But it was the first time I’d had a conversation like that. Before I moved to Berlin, nearly all the Iranians I knew were Jews. Of course, I’d meet Iranians in Neukölln, who were not only not Jewish, but not big on Netanyahu, either.

“Like a lot of Jews here, I’m on the left,” I responded. “I’m very critical of Israeli foreign policy, particularly towards Iran, and I’m well aware of the history with the Kurds. But I really appreciate the political significance of what’s going in Rojava,” referring to the Kurdish area in northern Syria.

If you want to understand the sorts of politics common to a lot of Israeli and American Jews who live in Neukölln, it’s not extraordinary to hear opinions like these. Berlin is a haven for Jewish ex-pats from both countries, looking both to pre-Holocaust Jewish Europe and post-Cold War Europe for change.

A big part of the draw is Berlin’s Palestinian community. As ironic as that sounds, it’s true. Palestinians provide a continuity of culture that many Israelis miss when they leave Israel, which signify Middle East, even though it’s not exactly the Israeli version.

This continuity is one that’s both colonialist (Israel has appropriated a great deal of Palestinian cuisine, for example) even though Jews of Arab origin brought Middle Eastern foods with them.

Still, nothing spells home like Palestinian cuisine, which, absent the political contradictions of ignoring it as Palestinian, make neighbourhoods like Neukölln a magnet for Israeli ex-pats.

If you’re a critic of Israel’s occupation of Palestinian territories and mistreatment of Palestinian Israelis, the borough, with its strong Palestinian activist community, is that much more familiar. Attending demonstrations in Neukölln can often be a political education in Palestinian politics Israeli and American Jews cannot get as easily at home.

Whether it’s because of separation between the communities in Israel, or a lack of connection to Arab American communities in the United States, I’ve met more than a few Jews who moved to the neighbourhood, who felt they got schooled here, for the first time, in the Israeli-Palestinian conflict.

Despite all of Germany’s deficits, with its intense Islamophobia and Antisemitism, and its anti-immigrant politics, that such experiences might be had here, is an eye-opener.

All of this said, one must not forget the Turks.

“They were the original Orientals to the neighbourhood,” a retired Israeli security official told me when we first moved here. “In the 1980s, Neukölln was where the Turks moved when Kreuzberg got too crowded. The Palestinian community in East Berlin followed them, after the Wall came down, because it was a largely Muslim area, something unheard of in the DDR.”

Whether that’s 100% true or not, is debatable. But today, the Turkish presence is thinning out.

Under pressures of gentrification, many Turks have sold their apartments and stores here and moved to the suburbs. Or, other parts of Germany, with strong Turkish communities. But, head east from Hermannplatz, where this photograph was taken, down the Kotbusser Damm, and a high concentration of Turkish businesses remain.

Coming across this flag, of the Marxist-Leninist Türkiye İşçi Partisi (Workers’ Party of Turkey) was like a trip back in time.

In 2013, Neukölln, and nearby Kreuzberg, were swamped with demonstrations led by left-wing Turkish activists, in support of the Gezi Park protests, against Recep Tayyip Erdoğan’s increasingly authoritarian rule.

Conducted entirely in Turkish, the Berlin protests I attended were a badly needed introduction for me to Turkey’s politics, and the plethora of red flags being flown at the events connected them to Berlin’s long history of socialist politics.

Eventually being succeeded by Erdoğan’s reversion to war with Turkey’s Kurdish population, the demonstrations grew more specific over the years.

Walking this year’s May Day demonstration, I could not help but marvel at the cultural information being unloaded before me.

From diversity politics to the Syrian Civil War, everything about this day was about condensing everything that makes Neukölln one of the most relevant Middle Eastern neighbourhoods in the world.