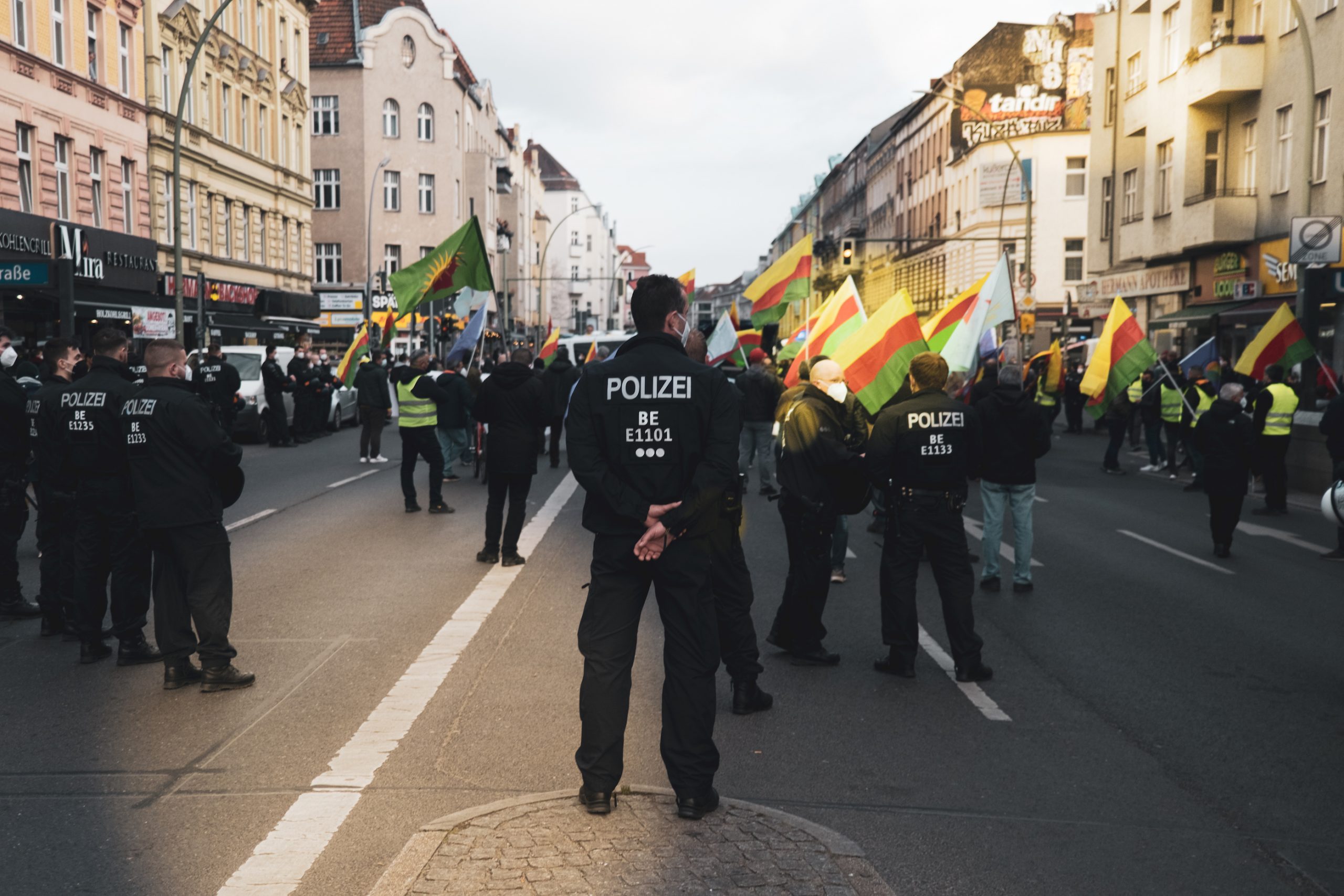 Gods of the Realm

A Critical Theory of Police Power, by Mark Neocleous

The conviction of Derek Chauvin for the death of George Floyd has been presented by American media as an important step in addressing police violence against people of colour.

Celebrations of the outcome, however, have been muted. Although Chauvin’s prosecution was a case of justice being done, no successful outcome could restore the dead to life.

Reactions to the verdict broke down along predictable political lines.

Conservative commentators generally took the position that the jury’s verdict was either politically motivated or slanted by the fear of a repeat of the Rodney King riots in Los Angeles in 1992.

On the left (and what remains of the centrist media), Chauvin’s conviction is seen as much needed first step toward reining in the overweening powers of the police.

Irrespective of their respective merits, it’s fair to say these positions break down in predictable ways. At the same time, they also fundamentally misunderstand the function of police in society.

In A Critical Theory of Police Power: The Fabrication of the Social Order, originally published in 2000 and recently updated, Mark Neocleous offers a systematic criticism of myths about law enforcement.

Police, or so we believe, are supposed to enforce laws. Neocleous, by contrast, argues that their primary role is to create and maintain the social order.

There is a lot to unpack in this book, which ranges in its subject matter from the history of police studies to the political philosophy of Hegel and a range of British legal theorists.

But the thread that connects the whole is the need for some sort of power to counteract the turbulence generated by the market.

While both liberals and conservatives tend to fetishise law as a free-standing pillar of society, Neocleous argues that it is a tool for preventing disorder and maintaining the smooth functioning of the economy.

The genesis of this approach was the forcible transition of large numbers of people from predominantly agrarian to industrial society, in Great Britain, between the seventeenth and nineteenth centuries.

The central state, having appropriated power from the old feudal nobility, needed a means of compelling the population to adopt waged employment.

The result was a series of laws forbidding idleness and vagrancy, culminating in the Vagrancy Act of 1824 (which remains on the books to this day).

This was a moment of primary accumulation, not only of the capital that would power the industrial revolution in Great Britain and beyond but also of the order-enforcing capacities of the police.

This latter process was paralleled by one in which police became the wielders of both legal and extralegal tools for keeping the rabble in line. This was central in the formation of the modern police forces in Britain and the United States.

The London Metropolitan Police was formed by legislation introduced by Sir Robert Peel in 1829. Peel had been instrumental in the formation of the Royal Irish Constabulary in 1822 and sought to import tactics and practices developed in colonised areas into the colonial metropole.

As Alex Vitale noted in The End of Policing, “[t]he main functions of the new police, despite their claims of political neutrality, were to protect property, quell riots, put down strikes and other industrial actions, and produce a disciplined industrial workforce”.

With the disorders of the French Revolution fresh in memory, and the rising militancy of English labour leading to events like the 1819 Peterloo Massacre, the formation of the Metropolitan Police was seen as means of professionalising and systematising the maintenance of good order and wealth creation.

These practices were soon taken up in the US. There, the defence of the social order was coloured, so to speak, by the practice of slave patrolling in the southern states.

In the north, where police forces were established in Boston (1838), New York (1844), and Chicago (1855), the main concern was the influx of immigrants and the need to discipline them into adopting the mores of the upper crust, almost exclusively white, Anglo-Saxon, and Protestant.

These police forces had little or nothing to do with fighting crime and mostly busied themselves with breaking strikes, spying on people deemed politically suspect, and shaking down criminals for payoffs.

The Coal and Iron Police, formed at the state level in Pennsylvania in 1865, were explicitly tasked with clamping down on labour militancy in the coalfields and steel plants.

Their commitment to actually existing laws was tenuous at best and they were responsible for numerous incidents of extreme brutality, such as the killing of 19 unarmed miners near Hazleton, in 1897.

As in the case of Peel’s work in Great Britain, police practice in the United States was influenced by a reflux of strategies and practices from colonised areas into the metropole.

Jesse Garwood, who was instrumental in setting up the Pennsylvania State Constabulary, cut his teeth doing what would now be called counterinsurgency work in the Philippines. August Vollmer, police chief of Berkeley from 1909 to 1923 had a similar background.

Smedley Butler, police chief of Philadelphia in 1924 (until his repressive methods sparked public demands for his resignation), had set up police forces in Haiti and Nicaragua in his earlier life as a general in the US Marines.

Common themes in these early police organisations include the regulation of political dissent through spying and provocation, but also monitoring of the more quotidian aspects of life.

These included tamping down (or shaking down) liquor consumption and prostitution, but also making rules about such matters as the length of women’s bathing suits and the limitation of kissing in public.

The role of the police has not changed significantly since the moment of their founding, and Mark Neocleous argues that it is built into the structure of the system. It is, in fact, a constitutive feature, in that a system predicated on systematic inequality intrinsically generates social unrest.

This has been particularly acute in the era of COVID-19. Large numbers of people were no longer compelled (or able) to spend the bulk of their waking hours in their places of employment, and idle hands do the devil’s work.

We might stop here to consider for a moment two other important features of the modern work environment: bullshit jobs and automation.

The former term, coined by the late anthropologist David Graeber, was an illustration of the startlingly large number of positions that exist for no good reason in a system whose fundamental selling points are the elimination of waste and inefficiency.

Automation is the buzzword and bogeyman of industrial and postindustrial societies the world around.

There are a large number of activities currently undertaken by human beings that could be done in some meaningful sense “better” by a robot or a computer. This is a source of anxiety to wage and salary earners up and down the income distribution.

And yet, the much-ballyhooed processes of actual automation have proceeded rather more slowly than projected, existing more often as a threat to ramp up the rate of exploitation of actual human workers.

Police repression and meaningless labour tasks are two sides of the same coin and are important elements in the transition from disciplinary societies to what philosopher Gilles Deleuze called societies of control.

One of the key features of societies of control is that individuals can move with relative freedom within the limits of the controlling order, but not outside it.

But, as policing in the United States illustrates with brutal clarity, not all individuals are created equal. The limits in which people live vary according to race, class, and gender.

Being a male person of colour in the US puts one at dramatically higher risk of having an adverse interaction with the police.

The chances that one will be shot dead for some trivial reason, or for no reason at all are much higher for nonwhite men than for others.

On the other hand, irrespective of race, the chances that a police officer will face serious legal jeopardy for killing someone are roughly the same, approaching zero asymptotically.

The Fabrication of the Social Order accomplishes exactly what it sets out to do: present “a critical theory of police power”. It bears a significant resemblance to Foucault’s work on governmentality.

Neocleous distances himself from Foucault, arguing that he does not focus on the police as an institution. Nonetheless, his integration of philosophy with the literature of police studies works surprisingly well as a means of conveying the centrality of police to Anglo-American society.

Unlike Alex Vitale’s The End of Policing, The Fabrication of the Social Order eschews both discussions of police power at street level and calls for projects of reform.

For Mark Neocleous, it is enough to demonstrate the fundamental imbrication of police in the fabrication and preservation of the status quo. Beyond that, what is to be done is left to the reader’s imagination.