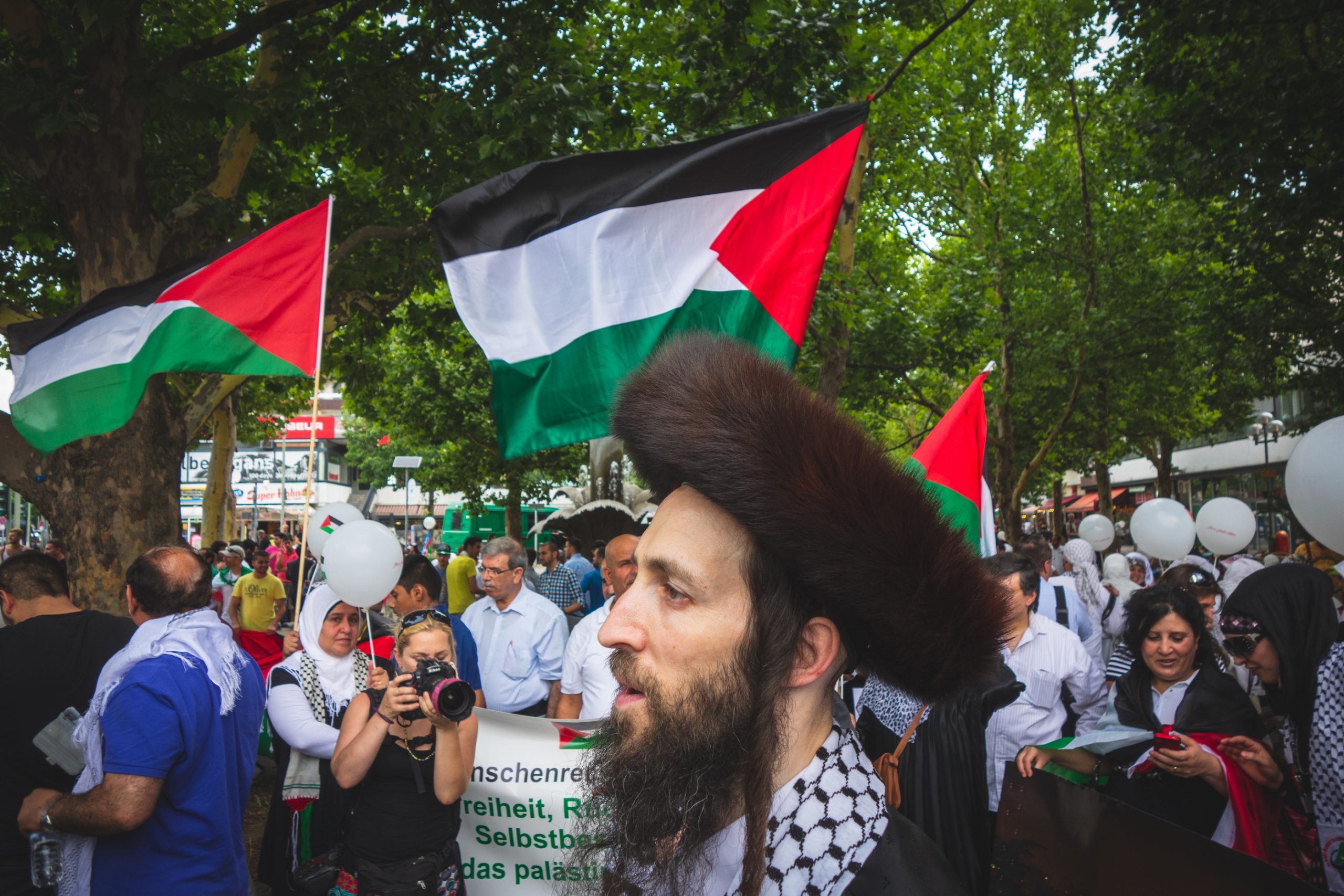 Victims of the Holocaust. Palestinians and Haredim, Berlin.

Antisemitism and its Privileges

Israel and Antisemitism are synonymous with one another. Not because Israel means Jewish, but because the country was founded by Jews, as a response to European racism.

If there was a Jewish nation-state, or so the idea went, Jews would not have to fear the discrimination they’d suffered from for centuries, living in diaspora, in Christian Europe.

Although many European Jews remained firmly attached to their countries of residence, there were strong arguments for them to embrace Zionism, the nationalist ideology based on the necessity of a homeland, which would come to define the politics of the Jewish state.

From their confinement to Russia’s Pale of Settlement in the late 18th century, with its hardships and pogroms, to the Nazi genocide, racism was the most consistent facet of European Jewish life.

Today, the issue looks different. Not because Antisemitism doesn’t exist – from Viktor Orbán’s victimisation of George Soros to conspiracies about ‘globalists’ and the Squirrel Hill massacre – there are more than enough examples.

The issue is how Israel has complicated it, as a country of Jewish majority. Unsurprisingly, few perceive the ironies of the issue better than Israeli leftists who move back, so to speak, to Europe.

In the final part of his interview with Leipzig’s JID (Jewish-Israeli Dissent) Wieland Hoban, Michael Sappir and Gal Levy discuss the uses of the term and what Antisemitism means today.

Wieland Hoban: Another difficulty is how we deal with actual Antisemitism.

Because of our political position, we’re so used to saying that all sorts of charges of Antisemitism are false and come from anti-Palestinian or Islamophobic attitudes.

Michael Sappir: I was just reading something about exactly that: a long article by Barnaby Raine in Salvage from 2019, entitled Jewophobia.

Something that really struck a chord with me was that actually, we should be pointing out that Antisemitism is more widespread than is usually thought, not less.

It’s written about the British context, but the situation isn’t all that different here:

The Jewish left, or Jewish Antizionists, are blamed for downplaying Antisemitism and saying it’s not that widespread. We should be pointing out that it’s much more widespread, just not in the ways people usually think.

Antisemitism doesn’t usually appear in Europe these days in the way that racism does, where someone is angry against the filthy so-and-sos from whatever part of the world they hate.

Antisemitism has a different form (today) and has for a long time. This isn’t new.

Michael Sappir: That’s the obvious part. But what Raine writes, and I agree with, is that what’s more widespread is a suspicious attitude towards Jews. The biggest example is how Europeans think we think about money.

I notice myself holding back in situations where money comes into play and being really careful not to come across as greedy. I’ve never heard anything from anyone. I just have this feeling that people will think strange things.

This is something Raine reports happening in Britain. But my experience has also been this fascination Gal described, wanting to say all kinds of things. I see this as structural.

The fact that Jews have been eliminated from society creates this gap between what people believe and what they experience, so that they’re just not used to the experience of speaking to a Jewish person.

Some more and some less, but even those who have some experience haven’t spoken to many.

Wieland Hoban: There are some programmes that have been trying to address this.

First, there was Rent a Jew. It’s a terrible name, but that’s now been absorbed into Meet a Jew, which is an improvement, but still sounds forced and artificial.

It’s difficult to find ways to bring about a normalised relationship.

Michael Sappir: This is where JID comes in. We could be making diverse Jewish voices more visible.

What we come across is this expectation that a Jewish voice has to be a Zionist voice, and that all other Jewish voices are silenced, which plays into this monolithic view of who Jewish people are.

That’s why I think it’s important that we, like the material on our website, are demanding space and saying, “You should let us be heard, that’s what solidarity with Jewish people means.”

Wieland Hoban: You probably know a bit about what’s happened to us at Jüdische Stimme, in terms of accepting the idea of non-Zionist Jews. It’s an uphill battle.

The more other people join in, the better our chances are of changing perceptions. Have you ever had the experience of changing someone’s mind?

Gal Levy: Yes, speaking with people face to face. At some of the meetings and protests I have gone to, I had experiences where people said, “Wow, there’s also that voice, we didn’t know.”

Everyone on the left here is living in fear of the topic. The voice controlling it is 100% Antideutsch. And then they saw us, that we’re Israeli Jews, and said, “Wow, thank you for showing us that there is such a voice.” And they started to think.

I believe that even the extreme Antideutsch have started to think a bit. Because they see it before their eyes, though maybe they’re not mature enough. But I’ve experienced it about five times that I know of.

Wieland Hoban: But really there’s a very simple logic: If you’re against ethnic discrimination in Germany, you should be against it in Israel too, or wherever.

Michael Sappir: But that’s where I find they have these shortcuts in thinking that make no sense but work really well.

I’ve encountered the view that, as in every country, there’s some discrimination in Israel, so we shouldn’t be singling Israel out.

But that downplays the extent of discrimination in Israel, which is nothing like most countries in the world.

It’s strange how often the phrase “double standard” comes up in this context because there is a double standard of precisely the opposite kind.

We can criticise the Chinese, the Turks or the Russian for the injustices there, but if we do that with Israel, we’re singling it out. It’s difficult to argue against that logic.

Gal Levy: Because it’s just an adopted logic. People should think about why they criticise something, and where that comes from. And then you’ll have the answers.

It’s a bit like domestic abuse, where you often see a son who was beaten as a child growing up into a father who beats his own children. But he still sees himself as a victim.

In Israel, that’s really clear to me. But the Antideutsch cooperate with this thinking – that we’re still the victims, so we’re allowed to do it.

You see that with Netanyahu all the time. He brings up the Holocaust in all sorts of contexts that have nothing to do with it.

Wieland Hoban: And Iran will bring about a new Holocaust.

Gal Levy: Of course, and everyone is playing along. That’s the problem.

I’ve stopped believing in humankind, I’m sorry. Oppression is everywhere. It’s unfortunate, but I see that for most people, it’s easiest to find someone weaker than them and blame them.

That includes the left, or this facade of a left.

The answer is so simple. Oppression is oppression everywhere. You have to recognise it and avoid oppressing someone else.

It’s not Antisemitic to be an Antizionist. These are two different things. But we’re not there yet.

Wieland Hoban: What you said just now – that trauma can lead to aggression when it’s inherited – has been condemned as an Antisemitic argument. The idea that Israel is an abuser is taboo.

We’re actually just talking about demonising, saying there are harmful effects of various kinds that have descended from the Holocaust. And of course for Palestinians too, who have to do the work of German atonement.

If one tries to work with social justice issues in general, this is something that can be extremely divisive and harm solidarity with Muslims, who can so easily be accused of Antisemitism.

Do you see ways to counteract that?

Michael Sappir: That’s very much part of what we’re trying to do with JID, and that’s also one of the reasons we translated our principles into Arabic on our website.

When we were getting started last summer, some of us were involved in a demonstration against the annexation plan. An anti-Israel demonstration in Leipzig is unheard of, but because the organisers this time were mostly Israeli Jews, it was allowed to happen.

People didn’t physically attack us, they just stood around and glared at us and tried to take pictures and names, which is also quite threatening.

But one of the most beautiful experiences we’ve had was at this demonstration, because it was attended by a lot of Arabs, including some Palestinians, and we got into some conversations.

An older woman, who I think is a twice-over Palestinian refugee from Syria, said it was her first experience of having a conversation with an Israeli.

We’d like to make it very clear that we’re here with a message of friendship for Palestinians, people from the Arab world and Muslims.

This idea of eternal conflict between Muslims and Jews is ridiculous. The Muslim world was the safest place for Jews for centuries! Compared to the Christian world, there’s no competition.

We have to try to break out of this perception. But it’s a lot of work because it’s really a priori.

People just think this is how the world works, and they’ll see any opposing facts as random exceptions. I don’t know how much that can change.

Gal Levy: For me, it’s sometimes easier here, because when I’m in Israel and go to the West Bank to demonstrate, I’m always in a position of power.

Even when we’re running away from tear gas or rubber bullets together, I’ll still come home safely that day and eat sushi.

I say that because it did actually happen one time. We were in Bil’in and demonstrated. Then we went home and went to a birthday party, and heard that a woman (from the village) was murdered.

For me, it’s also easier here, because I’m a migrant. I don’t have a lot of privilege here. It makes it easier to unite and be allies for one another and to speak without this hierarchy.

Now we’re actually in a country that oppressed our family, so to speak, in Germany.

Wieland Hoban: Solidarity with Muslims, Palestinians and Arabs in Germany, having their back when they get accused of Antisemitism, is an important task for Jewish groups.

Individuals too, of course. But it’s much harder to have traction than as a group.