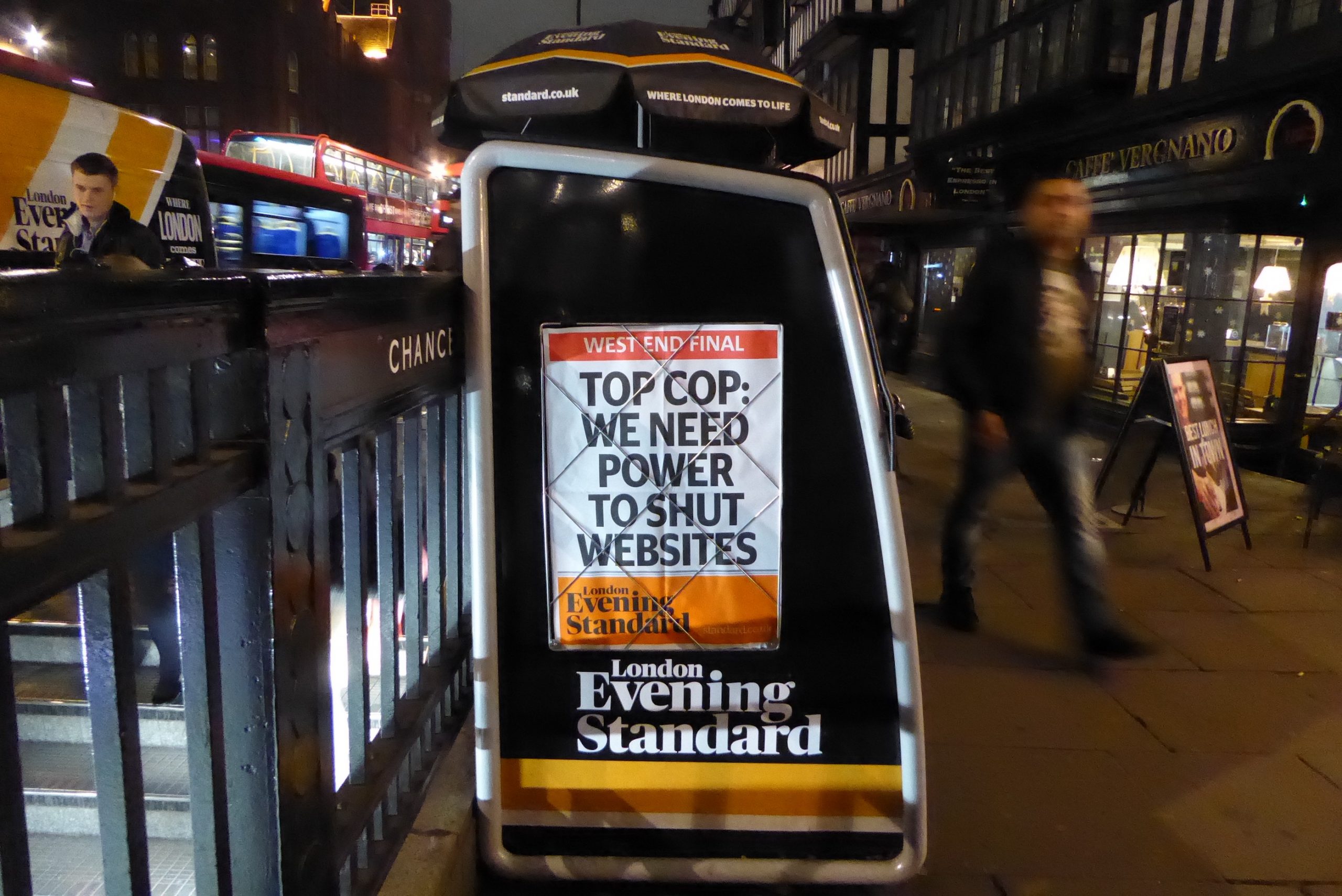 Once upon a time, Fleet Street was where the news was manufactured. Tens of thousands of people worked day and night to ensure the stories were written, edited and went to press on time.

The buildings of newspaper offices would quake as the printing presses were switched on.

Today, the media sector is very different. It now resembles a wing of the services sector more than a part of manufacturing industry.

Yet it’s also more precarious. The unions are gone. Internships, self-employment and freelance contracts are widespread.

At the same time, the average UK newspaper has shrunk its staff and the results show.

Every mainstream news organisation regurgitates press releases, posts clickbait and resorts to advertorials to make money. News is mostly confined to wire reports, with no depth or analysis.

The British media may be less prestigious. But the class composition of journalists is more elite than ever. Meanwhile, many journalists struggle to make a living off of writing alone.

Worse still, the culture has changed. The notorious long lunches are gone.

It was possible in the era before the 24-hour news cycle to write an article and drink all day. The sub-editors cleared up the text and the copy was sent down a conveyor belt to the compositors’ room.

Old Fleet Street watering holes like El Vino’s and the Cheshire Cheese are still standing, but the journalists are long gone.

The former offices of Reuters and The Daily Telegraph stand like monuments to a forgotten history.

UK newspaper publisher The Guardian is cutting its workforce by about 12%. Staff have been told redundancy letters have been sent, but with insufficient postage. Those being let off will have to pay the difference in the postage and then claim it back. #ethicalcompass

The Rise of Post-Industrial Journalism

It would be easy to overlook the historical shift that predated today’s online publishing.

We often forget how the stage was set for the transition when the printing unions were smashed in the 1980s and production was automated.

The best-known example is when Rupert Murdoch crushed the 1986 Wapping print works strike, with the support of the Thatcher government.

Whether Murdoch intended to or not, this was a catalyst for a new kind of journalism. As a result, the role of the newspaper changed, not just tabloids.

The Times, once the paper of record in the UK, is now a small part of the News International empire. It’s still the best brand Rupert Murdoch owns, but it’s not the biggest moneymaker.

At best, The Times functions as cover for the lowbrow press he publishes everywhere else. It’s not quite as sexy as Murdoch’s stake in VICE, his broadcast-equivalent, but it works.

Meanwhile, The Daily Telegraph has gone from being a respected and trustworthy (albeit very much Tory-aligned) news source to becoming a servile courtier to its best-known former employee, Boris Johnson. Though not everyone who worked with Johnson is happy about the man’s rise to power.

Under Katherine Viner, The Guardian has moved away from investigative journalism towards lifestyle coverage. This may explain why the newspaper that once published WikiLeaks reports is complacent about the extradition case against Julian Assange.

The much-maligned Seamus Milne built the Comment is Free section into a huge traffic generator for The Guardian. Whatever we may think of his brand of left-wing politics, Milne made the opinion section worth reading.

Since Milne left, Jonathan Freedland has turned the comment section away from more radical and subversive voices to give the platform back to liberal and centrist opinionistas.

There are now very few places readers can go for high-quality reportage and incisive commentary.

The Financial Times is the best newspaper in the United Kingdom precisely because it can afford to tell its readers things about the economy other papers are too afraid to admit.

At the same time, The FT has demonstrated great political foresight. The newspaper of bankers opposed the 2003 invasion of Iraq and supported the Remain campaign in 2016.

it says a million words that probably the best currently existing newspaper in the country is the financial times, which is owned by the japanese company otherwise unaffiliated to the UK afaik.

The Long Decline of the Tabloids

Even the average tabloid was not the salacious rag it is today.

The Sun and News Of The World redefined the role of the tabloid newspaper from the 1970s onwards. It wasn’t always about busty girls on page three.

In the 1960s, The Daily Mirror was the UK’s leading tabloid and its long-time editor Hugh Cudlipp set the tone of its pages.

Cudlipp was an old-fashioned social democrat and believed that the popular press should stand up for the masses, but try to educate them and improve society along the way.

The editor held an obviously paternalistic view of the public and the role of the newspaper in society. However, The Daily Mirror was tied to a centre-left agenda and inclined to promote the Labour Party under Harold Wilson.

The Mirror Group once owned The Sun after it bought up The Daily Herald and relaunched it, but it didn’t take-off so it sold the rag to an Australian media baron who was only just getting started.

Things have changed in the fifty years since The Sun became the biggest tabloid in the UK. Though the Mirror is still the best-performing newspaper historically, The Sun will likely remain the greatest zircon in Murdoch’s crown.

Since the 1970s, the tabloid press has been responsible for circulating and recirculating, even repurposing, news stories that tap into the popular imagination.

The kind of news picked up in The Daily Star has a range, but the framing is always incredibly right-wing. The results can be disturbing.

A great deal of ‘fake news’ flows from actual journalism. What distinguishes it from ‘real news’ is how facts get edited and narratives get repurposed to serve rightist political agendas.

Fake news isn’t just an aberration, an externality of media production. It’s part and parcel of what we regard as the mainstream news.

All media outlets report stories that are unverified at times. Sometimes those leads turn out to be false or misleading.

The panic over ‘fake news’ beginning in 2016 (as if lies had never been told before) was really a crisis over media legitimacy.

However, we shouldn’t fall into the trap of pretending mainstream news has a monopoly on real news and fake news is confined to alternative platforms and social media.

Facebook, for example, has recognised far-right publications such as Breitbart and The Daily Caller as legitimate news sources, while it restricts and even bans centre-left content.

.@Facebook says it’s not biased towards conservatives, yet Zuckerberg has allowed
Trump-loving Breitbart, a platform for white nationalists that was co-founded by Trump’s
former campaign CEO, to thrive, while suppressing progressive outlets in the news
feed… #BreakUpBigTech

It’s a sign of the times. Increasingly, social media platforms have developed their own editorial agendas and this conflicts with their role as news distributors.

It’s become increasingly commonplace that they limit the reach of media that they don’t agree with, or fear might hurt their sponsorships from advertisers.

Facebook, infamously, was repeatedly complained about for limiting the circulation of centre-left American media, when Donald Trump upped his campaign spending on the platform.

That’s why many alternative outlets like Novara Media have been forced to change their strategy to reach their audience.

Facebook Live is no longer a viable means for Novara’s shows. So the platform has turned to YouTube, where there isn’t the same level of concern about progressive content.

Alternative media are where all the innovation is today. Yet, it is continuously subject to the political whims of online platforms, which at any point can limit their reach.

The challenge is to eliminate that threat and serve audiences more easily, directly.

Until alternative media can find a solution to that problem, their capacity to educate the public and improve politics and culture will be limited.

In some ways, it’s worse than having right-wing competition from the likes of Breitbart and The Sun, as the problem is technological, not ideological.

The costs of solving it are much higher than simply having better ideas and superior copy.

One of the things often forgotten about the fall of the USSR was the role that fax machines played in regime change.

When the Kremlin said one thing, activists faxed something else. What today’s news media need to do is think of alternatives like that, however retooled.

Surely there’s something out there, waiting to surprise, that can’t be shadowbanned or have its account deleted.