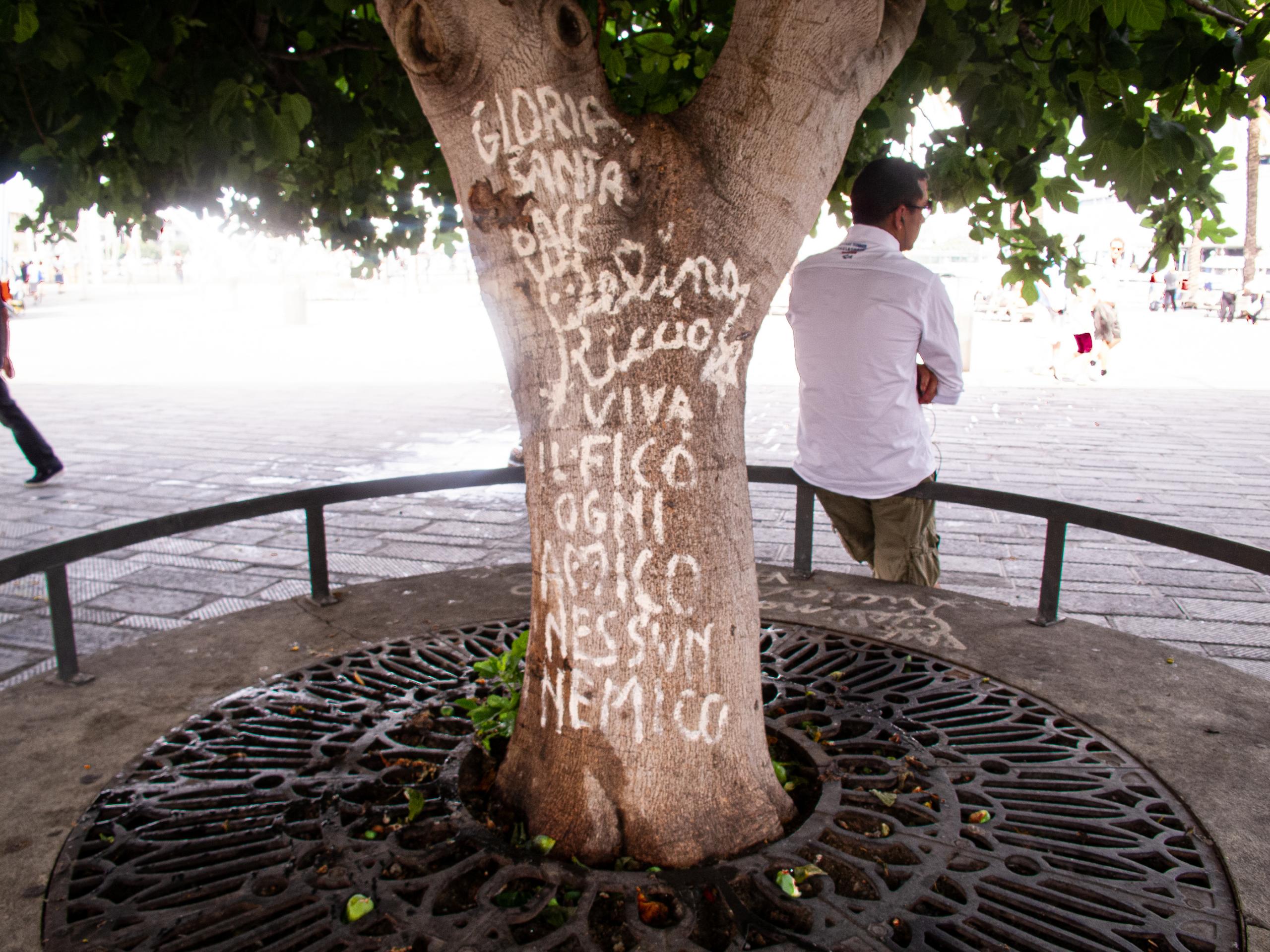 Everything is DIY. Centro Storico, 2018.

Two Saturdays ago, while listening to Bandcamp’s stream of New & Notable releases, a track suddenly pulled me out of my distracted state.

While the phonograph-like crackling, submarine pings, and ominous low-end sine waves reminded me of a lot of music that falls under the ambient rubric, a genre my mind typically consigns to the background, the way they started to build, as if a revelation were imminent, was too compelling to ignore.

Almost three minutes in, a pattern of beats entered the mix, one long followed by two short, while the menacing sounds of the lengthy intro continued to loom in the margins. Even though I was wearing thick gloves, I had to stop what I was doing and take a screenshot so that I could find out more about the track when I was finished.

Hours later, when I was going through my images from the day – I take a lot of photographs and even more screenshots – I saw the murky black cover and the cryptic title A&T6 and remembered to research the track that had captivated me. It was a confusing exercise.

Scrolling back through the Bandcamp stream, I learned that the title simply designated that it was the sixth track on an album called Ambient & Techno Pieces by an artist known as Tylakoid. Yet the two records listed under that name on Bandcamp didn’t include the track I had heard.

That left me with the title of the release on which “A&T6” appears, Ambient & Techno Pieces. It turned out that there is an album’s worth of material, from “A&T1” through “A&T7”, all of it resembling the track featured by Bandcamp.

Rarely has a title proved more accurate. Although each track contains elements that distinguish it from its companions, all but the final number combine the ambient noises of the three-minute intro to “A&T6” with a rhythmic sensibility taken from the European club scene around the turn of the millennium.

This particular type of fusion has become increasingly common since EDM went mainstream, perhaps most persistently in the records put out by Cologne’s longstanding Kompakt label. But whoever put together the music on Ambient & Techno Pieces performs the feat with particular aplomb.

Whereas a lot of work in this vein seems excessively abstract, to the point of dispersing its musicality, Ambient & Techno Pieces is emphatically visceral. The details that first caught my ear in “AT&6” reflect the music’s insistence on situating listeners within a space saturated by risk, in which the promise of revelation is shadowed by the threat of destruction. It’s an incredible album, all the more impressive for transcending two increasingly hidebound genres.

I had to know more. Finding nothing on Spotify or Tidal, I turned to YouTube, which seems to have material from every musician on the planet. There I noticed that Ambient & Techno Pieces, while still credited to Tylakoid, was also listed under a Collettivo Sbermuz. Searching for that name on Bandcamp brought the album up, along with two others. All three were also on YouTube.

As I write this sentence, Ambient & Techno Pieces only has 83 views on YouTube and only 20 supporters on Bandcamp. Even for a record that has only been out for a few weeks, these are astonishingly low numbers. The two other records identified with Collettivo Sbermuz have been out longer, yet are doing no better in this regard. Both are deeply compelling in their own right.

The first, titled .vvoa files (folder 1) and credited to Memphis, was released at the very end of 2020. It has affinities with the less minimal work of Detroit techno pioneer Carl Craig and much of the material on the Hyperdub label. Although consistently rhythmic enough to be danceable, it seems to be targeted at the wallflowers who would rather stand on the edge of the floor and watch.

The second, giuseppe ha affronato se stesso, is credited to Anduela Keku and was released in mid-January. Like the Tylakoid’s other work and the Memphis record, it is a product of Genoa, made at Alien Stone Studio.

Unlike those other releases, however, it strays far from the territory of electronica, providing a brand of “extreme bass and drums” that has more in common with the sludgy stoner rock of bands like Sleep and OM. And it’s incredible, spare and hypnotic, with impossibly intriguing titles like Perché? Anche I fratelli Karamazov è una critica al capitalism.

Taken together, these three records testify to a remarkable creative ferment from a part of Italy that has attracted little attention from music lovers. Beyond that, though, it’s hard to draw conclusions. There simply isn’t enough information available for someone who doesn’t know these musicians to pin down their intentions.

What is the Collettivo Sbermuz? The liner notes on Bandcamp for Ambient & Techno Pieces list Buba quello Famoso; Andre the d(r)ead; Mauriglio Ventriglio (Spilp); Razoreater Solarino; Danilo, who plays bass on the Anduela Keku record; Uzi Mammud; and Peppone. But these personalities – or bands, since it’s unsure even what they signify – have no internet presence aside from the liner notes themselves. And that’s what makes this work identified with this “DIY” collective even more exciting to me than it would be if there were more information to go on.

It has never been easier to find music that fits your mood. Every online platform you use will provide an endless list of suggestions based on what you have already listened to. If that seems too invasive, you can search through both algorithmically generated playlists and the untold number curated by ordinary people like yourself. Truthfully, we are blessed with an incomparable surfeit of fittedness.

But that surfeit can also seem like a curse. Back in the day when popular music played a more significant role in the lives of young people, finding music that didn’t fit their previous tastes frequently marked the first step in breaking free from the prison of an identity imposed by others.

Falling under the spell of a new song used to feel like magic. And it still can. Unfortunately, though, this incantation obeys a logic inextricably bound up with scarcity. Novelty depends on ignorance, the blank spots filled in by desire.

If you can learn about an artist in a matter of minutes and develop a working familiarity with their catalogue in a few hours more – all without spending enough money to make a meaningful psychological impact – those blank spots will be flooded with information instead.

Because Ambient & Techno Pieces and the other products identified with the Collettivo Sbermuz seem to come to us, at least for now, out of nowhere, they leave those spots blank. That’s a remarkable gift these days, made all the more special by the fact that it is wrapped in sounds that would still appeal to listeners greatly if they had been produced by musicians drenched in hype.

These days, novelty must be cultivated like the rarest of orchids. Even self-released works with no connection to a label typically come with a wealth of detail about who made them and why.

Text is cheap on the Internet. To withhold it, as Collettivo Sbermuz seem to be doing, is to reintroduce scarcity into the consumption of music in a world saturated by knowledge. Even if this is the by-product of accidental obscurity, they should be commended for not trying to compensate for the lack of exposure with a wealth of information.

Truly, this is one case in which the music must speak for itself and does so with remarkable force and clarity.