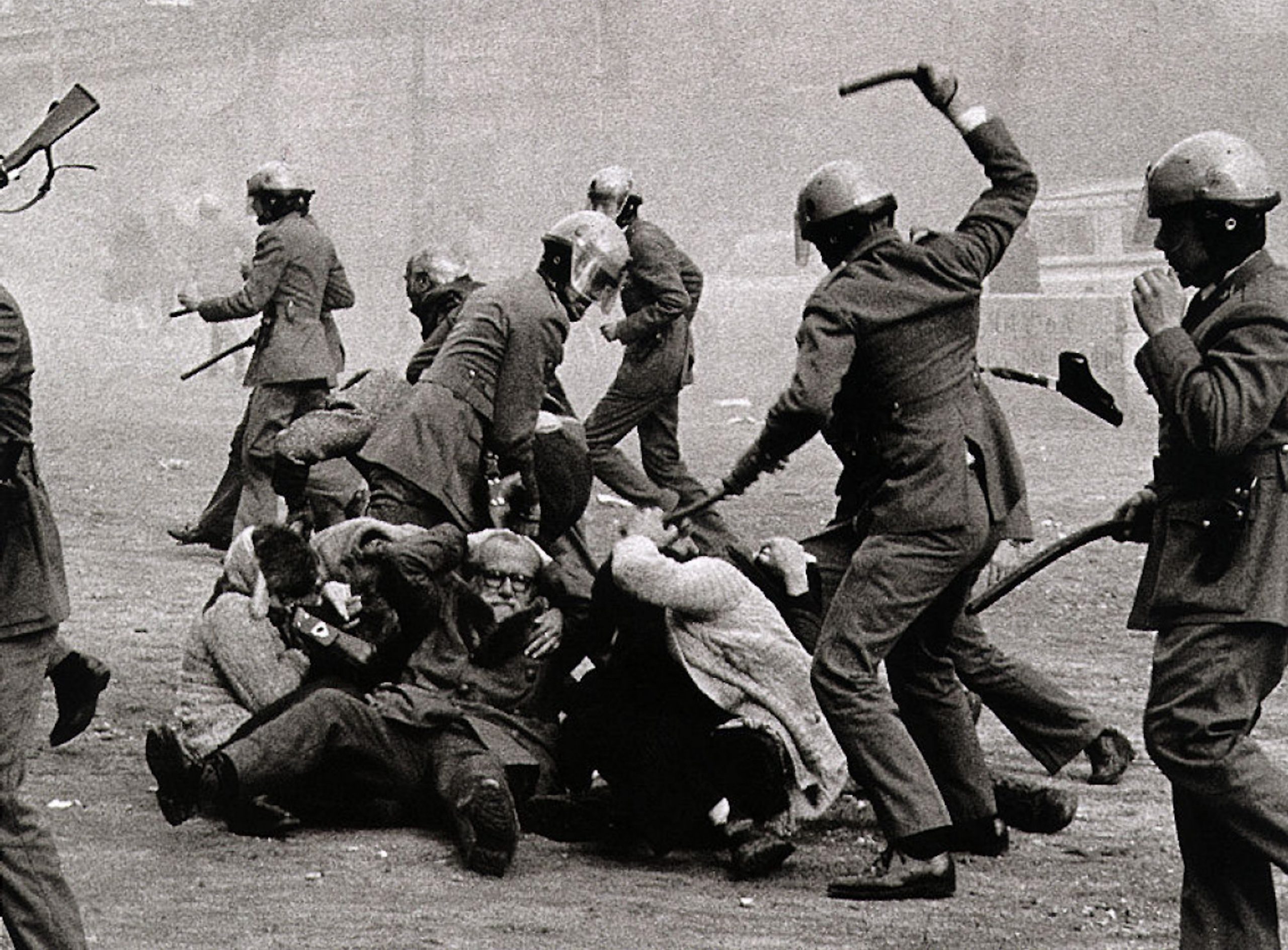 A concrete platform occupies a bend in the road in the El Roquetes neighbourhood of Barcelona. It overlooks a dusty playground and a climbing wall, and then beyond the broad sweep of the city and the azure sea.

In the last years of the Franco regime, this was the site of protests by the locals demanding improvements to public services.

The platform itself comprises an installation meant to evoke the transition from incarceration to freedom. It is a monument to a bygone era of militancy in the face of oppression, and to Salvador Puig Antich, one of the fallen heroes of that struggle.

In the late 1960s and early 1970s, he was active in autonomist anarchist groups that straddled the borders between Catalunya, Languedoc, and the Basque country.

There, in the waning days of Francoism, armed groups espousing a range of radical ideologies, some leftist, others more nationalist in orientation, did battle with the forces of the authoritarian state.

Many of these were so ephemeral, or so vigorously opposed to vanguardism, that they didn’t even bother to name themselves.

Much of the activism of the Movimiento Ibérico de Liberación  (MIL), with which Puig Antich was active beginning in December 1971, involved bank robberies (expropriations, in their parlance).

The proceeds were meant to provide strike funds and the means for activists to live underground, but also to fund the production of tracts and other materials meant to promote anti-capitalist struggle. Inevitably, this led to conflicts with the Spanish government.

Puig Antich was arrested in September 1973 after a shootout that left one police officer dead.

The circumstances of the shootout were disputed, both then and later, but neither the Franco government nor the neoliberal regime that succeeded it ever showed much interest in deciphering the precise details of the incident.

Aged 25 at the time, Puig Antich was sentenced to death (twice) by a military tribunal on 8 January 1974.

In light of the fact that this was barely three weeks after militants from ETA killed Luis Carrero Blanco, Franco’s heir apparent, in a spectacular car bomb attack in Madrid, the outcome of the trial was a foregone conclusion.

The revolutionary was held for two months at the infamous Model prison in Barcelona, during which time Puig Antich’s case was appealed and a range of options for attempting to free him was investigated by leftist groups in Catalunya.

These proved fruitless. After Puig Antich’s final appeals were exhausted, he was executed by garroting on 2 March.

News of Puig Antich’s execution led to demonstrations and, in some cases (particularly among students in Madrid) rioting. It also sparked the formation of the Revolutionary Internationalist Action Groups (GARI), a militant organisation dedicated to avenging him.

In death, Puig Antich became a household name in Barcelona. But in the years since Spain’s transition from Francoism to liberal democracy, his memory has waned.

Salvador Puig Antich: Collected on Repression and Resistance in Franco’s Spain, edited by Ricard de Vargas Galarons and translated by Peter Gelderloos, has taken an important step toward reviving Puig Antich’s memory, introducing his legacy to the English-speaking world.

Having been killed at such a young age, Puig Antich’s output was somewhat limited, composing only around forty pages of this 275-page volume. Yet he showed a talent and political nous that belied his youth.

The balance of the book is made up of a wealth of other material, including images, historical treatments of the MIL and related organisations, and reminiscences from comrades and family members.

The MIL, in which Puig Antich was active for two years before it was dissolved by its members in August 1973, was part of a wave of armed leftist revolutionary organisations that arose in Europe, North and South America, and elsewhere in the early 1970s.

Some, like the Irish Republican Army (IRA), were organisational extensions of struggles going back decades. Others, like the Rote Armee Fraktion (RAF) in West Germany or the Brigate Rosse in Italy, had grown out of the student movements of the 1960s. Northeastern Spain was a particular hotbed of this sort of activity.

There were traditions of leftist agitation and resistance in Catalunya stretching back to the Spanish Civil War in the 1930s. There was long-established commerce in ideas and activists between Barcelona and Toulouse in southwestern France, the Spanish name of which (Tolosa de Llengadoc) testifies to its imbrication in regional struggles that crossed national borders.

Armed resistance in Catalunya was further facilitated by its proximity to Euskadi, the Basque region. As former members of the MIL relate, there were extensive connections between the Catalunyan leftists and the various factions of ETA (Euskadi ta Askatasuna or Basque Homeland and Liberty).

While the ETA tended to be more authoritarian than democratic in its orientation (at least in the 1970s) it was willing to make common cause with other foes of Francoism and provided the MIL with both money and weapons.

What makes the MIL particularly interesting is the rigorous commitment of its members to avoid the pitfalls of other groups on the left.

The MIL were implacably opposed to the more settled labour and political organisations of the left, particularly the CNT, the grouping of anarcho-syndicalist unions left over from the era of the Republic.

According to MIL activists, the CNT had become hopelessly bourgeois, incapable of taking any kind of action that might challenge capitalism at a systemic level.

Along similar lines, Puig Antich and his comrades were firmly opposed to dirigism, the idea that the state should play a strong directive role in economic matters. This libertarianism put them at odds with both middle-class socialists and all but the most anti-statist strains of Marxism.

A further important dimension of MIL thinking was the opposition to “vanguardism,” the mainline Leninist ideology, which saw small cadres of revolutionaries pushing the working classes beyond “mere” trade union consciousness.

The MIL saw itself as activists trying to create conditions under which workers would liberate themselves rather than relying on others to take on the struggle on their behalf.

In a number of his texts, Puig Antich distinguished between “armed agitation” and “armed struggle,” a central political distinction for the group. He wrote:

“Armed agitation supports and facilitates revolutionary movements without trying to dominate and appropriate them; rather from a place of military struggle, it inserts itself into the development of the revolutionary process. Armed agitation is not about creating an army or an organization that would lead the workers to their emancipation. On the contrary, the emancipation of the working class will be achieved by the workers themselves: the essential question is how the groups of armed agitation, operating at a military level, can and must support the proletarian struggle.”

The predominant way that the MIL chose to do this was the production of revolutionary tracts, some of which they wrote themselves, some of which, they issued in what the German ‘68ers used to refer to as “Raubdrücke” (pirated printings).

These included works by the like of Paul Lafargue (Karl Marx’s son in law) and the Dutch communist Anton Pannekoek. Their republication of Pannekoek’s Workers’ Councils illustrated the group’s profound interest in the council communist tendency of the 1920s.

This was part of the MIL’s broader goal of conceiving of a variety of leaderless leftism, often employing Marxist analyses while eschewing Marxist tactics (to the extent that this term has meaning).

This too is hardly surprising, given the willingness of the organised Spanish left, particularly the Carrillo-led Partido Comunista de España, to seek paths toward reconciliation with the Francoist government. Although the MIL embraced certain aspects of mainstream Marxist theory, they regarded the remnants of Stalinist communism as elements of the state apparatus.

Likewise, for a time, the MIL accepted the analysis, widespread on the left, that large monopolistic, state connected enterprises are the last phase of capitalism. This turned out not to be the case, and members of the group later acknowledged this as an error.

It is easy to look at groups like the MIL and see only hopeless romanticism.

The fact that they engaged on numerous occasions in shootouts with the police, and that several of their members died this way, smacks of a certain degree of “Custerism,” to borrow a term coined by Black Panther Fred Hampton.

A more interesting question might be why so many passionate, politically engaged young men and women turned to armed struggle in the early 1970s.

Some, like Germany’s RAF, believed that acts of violence would function as propaganda, making manifest the possibility of systemic change. The grim history of the organisation and its various offshoots bitterly illustrated the bankruptcy of that approach.

For the MIL and similar autonomist groups, influenced by leftist threads of council communism, anarchism, and anarcho-syndicalism, the goal was simply to create spaces into which self-generated proletarian militancy could flow and flourish.

This was a noble ambition, but arguably misguided. Herbert Marcuse, one of the most profound anti-capitalist thinkers of the post-war era, repeatedly made the point in the 1970s that agitation should be undertaken in the open and that political practice should create humane values.

In a lyric written in 1978, after most of the militant groups had been crushed, Clash frontman Joe Strummer aptly summarised the failings of armed militancy: “Because it won’t get you anywhere, fooling with the gun. The British Army is waiting out there, and it weighs 1500 tonnes.”

There was a great deal of truth in Strummer’s observation. The armed struggles of the 1970s were (mostly) noble in their motivations. But they facilitated crackdowns and repression by the forces of order that were extremely destructive to radical politics.

The writings of Salvador Puig Antich, and the texts relating to the MIL and other militant groups, are important as a marker for a moment in time when young people resolved to put their bodies on the gears and stop the machine from working.

But the tragedy of these insurrectionists is that they failed to find a means of agitation suitable to the achievement of their ends.

In the end, the Francoist state was resolved into neoliberal capitalism without much of a hiccup. The crimes of the past were forgotten and Spain’s elites went back to making money, against the rhythm of periodic elections, the results of which disturbed the process little, if at all.

The life of Salvador Puig Antich stands as a monument to the rejection of business as usual and the search for life beyond the free market. Perhaps it failed. But it was a noble attempt, and one worth remembering and learning from.