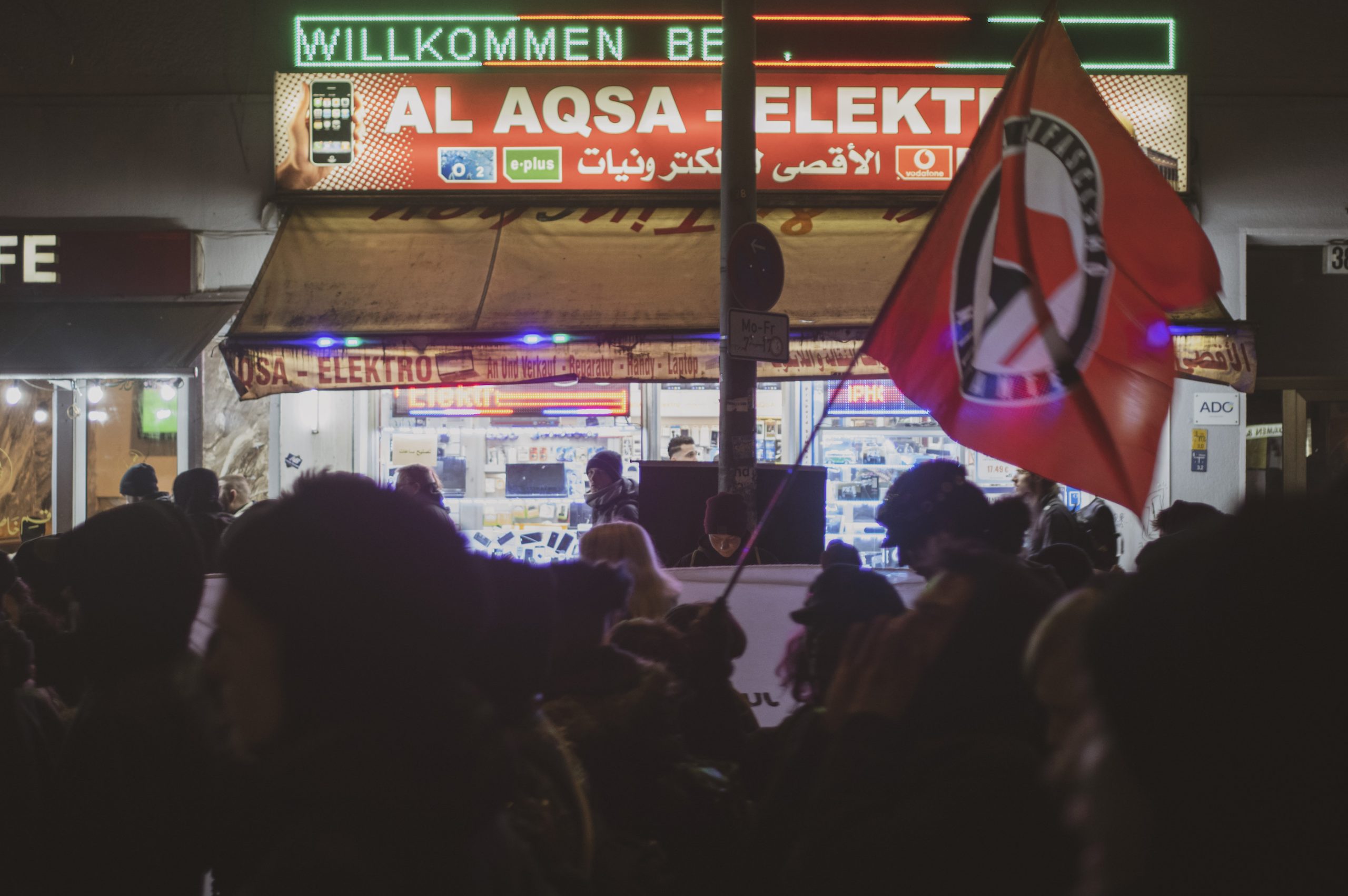 Palestinians and the German Left

If it was just about numbers, in Germany, Jews and Palestinians could be equals.

The population data speaks for itself: 100,000 versus an estimated 80,000, not including Palestinian immigrants counted as Lebanese and Syrian.

But, politically, the facts on the ground are very different.

Due to the Nazi genocide, nationalism, and how Holocaust guilt often rationalises Islamophobia, Palestinians get discriminated against.

This is not to mention, of course, all the burdens that they share with other refugees from the Middle East, as outsiders.

To most Germans, including many on the left, they are Arabs. Not a particular community from the Levant, with their own culture and history.

In the second part of their dialogue, Wieland Hoban and Ramsis Kilani discuss what this experience is like for Palestinians and why the German left must do better.

Wieland Hoban: There are an estimated 35,000 people with Palestinian backgrounds in Berlin. Anyone who has contact with the migrant world likely knows some of them, which makes (the community) less abstract.

Ramsis Kilani: That’s the other problem: For many non-migrant Germans, not only are Jews an abstract group with whom they don’t have much contact, but many of them also have hardly anything to do with people from migrant backgrounds.

On the left, it’s often very uniform groups with a very uniform background, whose anti-racism is often very abstract. And who, when they sit down with those people, can hardly communicate or deal with them. You see that again and again. They often have a lot of racist prejudice themselves.

Wieland Hoban: I think it’s often a challenge for non-migrant leftists to cope with different cultural backgrounds and attitudes.

Ramsis Kilani: Yes, including political positions. Racism equally affects someone who lives here and holds conservative views. That doesn’t change the overall situation and their minority position in society.

Wieland Hoban: If I say that I’ll only stand up for those Arabs or Muslims who are progressive enough for me, then that’s not really solidarity.

Ramsis Kilani: No, and that’s precisely the kind of position that pushes people away and even more into that role, to withdraw into conservatism or into religion, into their own community.

We really see that with Palestinians in Germany, how very few become politically active because they’re so intimidated, and that even in Berlin, with tens of thousands of Palestinians, political organisation is very, very low. Only a very small number of people do anything at all, because they don’t feel welcomed or represented by these groups.

You first have to get to the point where people can put their prejudices aside when dealing with actual people in real life, and not just have a prejudiced image that’s so homogeneous. So that they see this is a heterogeneous group of people like any other.

(Germans) have to gather experiences in their own daily lives that, at some point, can overturn their worldview. That’s a great challenge, especially for those who try to compensate and view their entire identity as Germans partly through this post-Holocaust lens.

Wieland Hoban: Where do you see opportunities to form alliances on the left in general, and also in Die Linke [The Left Party]?

Ramsis Kilani: The whole issue is still fiercely contested in Die Linke. The official position has changed a bit, with a resolution that came out this year, saying that if the two-state solution continues to be blocked by Israel, then Die Linke would want equal rights for all people there.

There are different forces within the party that are fighting for influence on various political issues. But there’s also a very clear question of whether one wants to govern, whether one has a reformist orientation and wants to join the government together with the SPD [Social Democrats] and the Greens or to focus on strengthening society from below and building movements.

Wieland Hoban: So you’d say that the increasingly pro-Zionist direction is connected to the aim of getting into power?

Ramsis Kilani: In the left scene it varies, but in the party, it’s really very clear, because that’s an official “reason of state” in Germany and it’s an obvious obstacle to power if one takes a different position.

The movement level, with an increasingly active anti-racist movement with migrant self-organisation, could help a bit in this discussion.

The most important thing is never to back down, never to make concessions or make Palestinians take the fall, but to say very clearly: consistent anti-racism isn’t possible without Palestine solidarity.

If you’re ultimately taking racist positions and siding with the oppressor, you’re not consistently anti-racist. One has to get out of this defensive position of always saying, “Oh, we’re not anti-Semitic.”

Wieland Hoban: That was evident on a massive scale in the UK, where the left-wing of the Labour Party was too willing to concede that the accusations of Antisemitism were justified.

Ramsis Kilani: Yes, I think the Labour Party is really a perfect example. As soon as you back down once, they keep going and see that they can achieve more and more, and you’re constantly backpedalling. That was used as a campaign to destroy the left-wing of Labour, the truly social-democratic wing.

I think we can learn from that in Germany that we have to be united as groups too, and build up a network of solidarity to offset that – so that you know there are people who’ll support you, who’ll stand up for each other unconditionally on these issues.

We have to go on the offensive and say loud and clear: you’re differentiating between the value of human beings. You don’t want human rights for particular ethnicities. That’s racist.

Wieland Hoban: But we often find ourselves in a difficult situation if we try to clarify the commonalities of groups experiencing discrimination. There are accusations of downplaying Antisemitism, as if one were trying to deny it’s a problem and a threat.

Ramsis Kilani: The main problem is that there are always different categories of victims. Antisemitism is treated as something far more evil and grievous than other forms of racism.

I don’t think those people are sincerely fighting against Antisemitism. It’s about a sense of identity – their own identity, not those affected, and it’s not an easy task to make that clear.

It’s not about people who have a closed worldview, because that’s the wrong tactical approach, trying to convince them that (we are) acting in good political faith. It’s about reaching the undecideds.

Most of them have this gut feeling that what’s going on in Israel-Palestine is unjust. One has to try to convince and strengthen them in such situations, which can only happen if (we have) real political confidence and don’t back down.

Not like Labour, saying, “Oh, we have a major problem here” and starting a witch hunt against people on the left. A lot of Jews have been suspended or expelled from Labour over this!

Ramsis Kilani: That’s exactly what happens if you don’t make it clear these people aren’t concerned about fighting Antisemitism, let alone fighting consistently against every form of racism, but about their own identity as Germans.

I don’t need to convince a pro-Israel politician that I, a leftist from a migrant background, am not Antisemitic. That’s not what this is about.

Wieland Hoban: An effective pro-Israel strategy is that when one tries to talk about simple human rights issues, they keep trying to divert the discussion towards smaller historical details.

Ramsis Kilani: Yes, it becomes a totally abstract discourse about Antisemitism, not about the situation on the ground and the human rights violations there.

Wieland Hoban: What other country demands the recognition of a right to exist? Where else does one accept the necessity of an ethnic majority for a state’s identity?

Ramsis Kilani: Those are the kinds of contradictions one can use to convince the undecideds, people who see themselves on the left. But it’s really a far-right argument, saying that the ethnic balance mustn’t be changed.

Wieland Hoban: Because that would mean the “destruction” of the state of Israel.

Ramsis Kilani: It gets equated with that. Ethnic plurality is a destruction of national homogeneity. But why should it be a leftist position to maintain homogeneity or some ideology of racial purity?

The underlying assumption is that all Palestinians, or even all Arabs, want to destroy the Jews, which is a misguided and racist worldview. One has to let Palestinians speak on these issues as people who are affected.

Wieland Hoban: That’s something that’s constantly emphasised in the anti-racism debate: letting people who experience discrimination have their say. Yet one rarely finds discussions about Palestine and Israel where Palestinians are represented.

Ramsis Kilani: We don’t have enough media influence to affect things like talk shows, but whenever there were discussions about this, no Palestinians were invited, certainly none that give a representative idea of Palestinian perspectives.

The other problem, as I mentioned, is that because of all the intimidation, there aren’t many Palestinians who are confident enough to speak up or get deep into the politics of it. But that’s changing a bit now.

Wieland Hobani: Maybe one factor is that younger generations have more confidence because they haven’t come to Germany with migrant status, but were born here as German citizens.

Ramsis Kilani: That’s right, and they have a much better understanding of society here. And are part of it to an extent, but can never become fully part of it because of all the othering and inequality.

(But) there’s a specific form of anti-Palestinian racism where one’s identity is denied, where the oppression is reversed and there are projections of German identity onto us.

Palestinians are essentially portrayed as the new Nazis. I’ve experienced that since childhood.

Wieland Hoban: Even saying “Palestinian” or “Palestine” can be taken as an attack on the German worldview.

Ramsis Kilani: Yes, that’s how people sometimes react. We’ve all had those experiences, to the point where you don’t even feel like answering when someone asks where you’re from because you don’t want to say “Palestine” or “Palestinian”.

Wieland Hoban: You don’t want to get into that whole discussion.

Ramsis Kilani: Exactly. It can lead to extremely unpleasant, exhausting and sometimes re-traumatising discussions. But there’s no point backing down. One should always be open and confrontational.