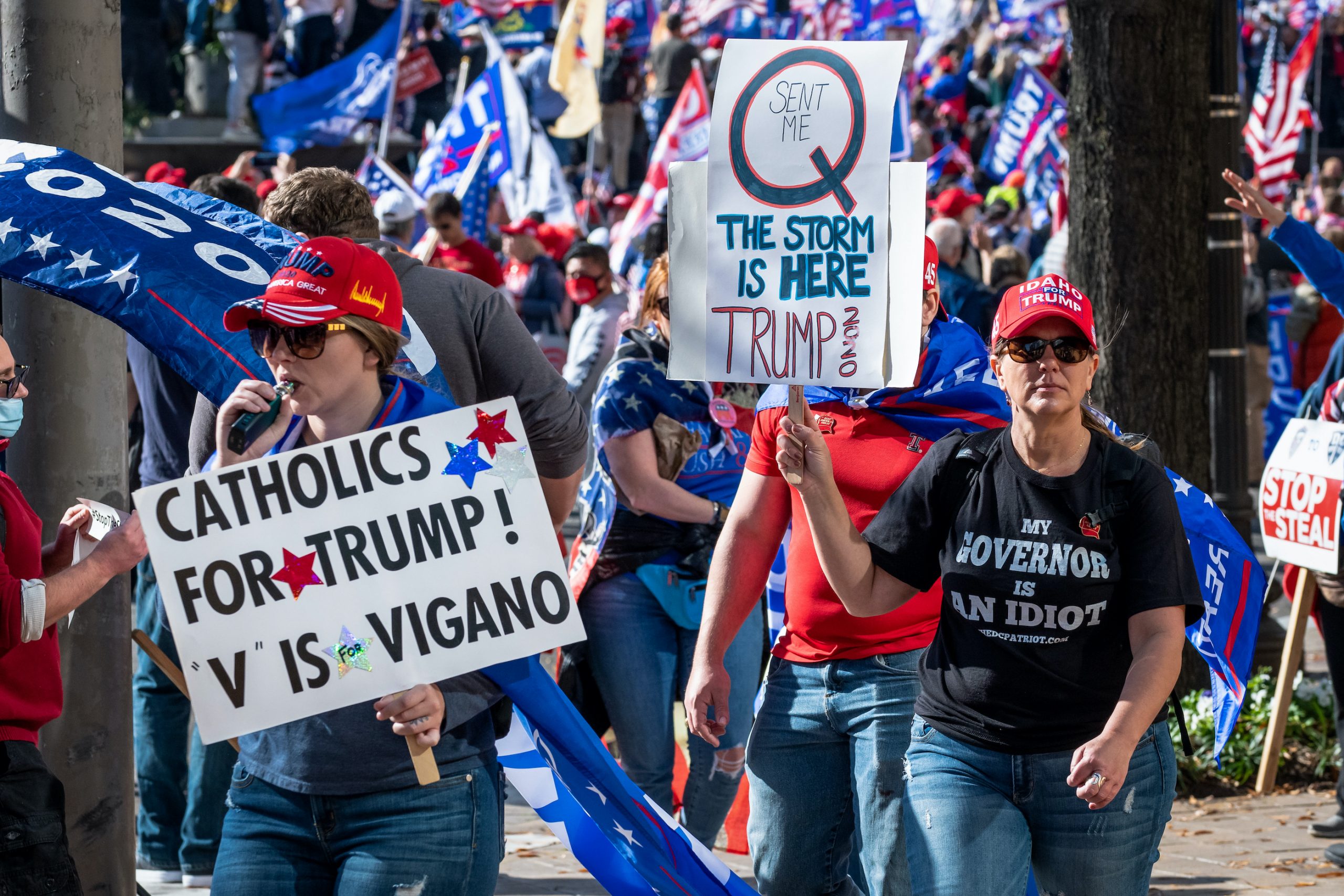 With God on their side. QAnon protest, Washington DC.

Ashli Babbitt might be dead. But she’s become a national icon, for both the right and the left.

For nationalists, Babbitt is a martyr, a fallen Christian Jihadist.

She sacrificed herself for her country, to prevent it from being taken over by minorities and paedophiles.

For everyone else, the right-wing extremist got something approximating what she deserved.

This is what you get when you try and violently overthrow the US government.

More importantly, this is what awaits when you put your life on the line for Donald Trump.

Perhaps this is harsh. The problem is that the choices we make, and the people we are, result from forces we have little comprehension of, beyond the circumstantial.

The philosopher Otto Neurath once compared this process to trying to repair a ship while always at sea.

This is particularly true with respect to Ashli Babbitt.

The picture that has emerged of Babbitt since her death indulges the abandoned Vietnam vet archetype, who can’t adapt to civilian life, and a person passionate to the point of lacking control.

Babbitt made some mistakes in her life, but none more catastrophic and inexcusable than the one that ended it.

As someone who spent fourteen years serving as a police officer in the US military, it was thus ironic that she was shot to death by another cop.

The minute that the Capitol Police officers on the scene drew their weapons, no one in the crowd had any excuse for betting against their using them.

The remarkable thing is not that somebody got shot, but that more people didn’t.

That Ashli Babbitt was prepared to make one of the worst sucker bets in US history had a lot to do with her personality. But it also was because she’d succumbed to the QAnon ideology.

In a media and political environment in which lying has become the coin of the realm, it should come as no surprise that people like Babbitt sacrifice themselves for aspiring dictators.

The dissemination of QAnon and related New World Order-style conspiracy theories happens as a synergy between overlapping groups of cynics.

On the one hand, there are the propagandists who come up with the narratives, spreading it like a viral agent through social media environments populated by the angry and gullible.

These people are, both in terms of moral sentiments and business model, narcotics dealers, profiting off the degradation of other human beings.

Some of them believe in their product, but many don’t, leveraging their lies, like televangelists and megachurch preachers, to build their rep and make money off their websites and books.

The damage the Alex Jones of the world cause would be far less profound if it were not for the cover they are given by Republican politicians, who mine their conspiracies for new voters.

The repeated assertions retailed by Trump and his functionaries that the recent presidential election was fraudulently contested is a case in point.

Not a shred of evidence has ever been adduced in support of these claims. Nor has there been any explanation why if fraud did occur, it was perpetrated by one side and not the other.

The true substance of these assertions can be seen in the court filings, in which the evidence-free claims have to be muted because those making them could be sanctioned for their excesses.

And yet, major figures in the Republican Party persist in promoting these democracy-eroding fantasies.

Even in the wake of the Capitol Riot, many in the Republican Congressional delegation persisted in spreading the same falsehoods that had motivated the mob in the first place.

Ever since the 1995 Oklahoma City Bombing, in which a white supremacist Gulf War vet drove a truck full of explosives into the Alfred P. Murrah Federal Building, killing 168 people, Republicans have openly leveraged anti-statist ideas and movements to their own ends.

Unlike the Democrats, the Republicans have long recognised that they face challenges from demographic and ideological shifts in the country and that drastic action is needed to prevent them from endangering the current distribution of racial and economic power.

Of the many conspiracy theories bouncing around the web, QAnon presents a particularly inviting prospect for synergy with the politics and mores of the modern Republican Party.

QAnon is especially useful because it targets their political rivals and makes the party’s current leader into a messianic figure. Hence, the elevation of Donald Trump to a near-deity.

Its goals – saving children from nefarious figures intent on sexually exploiting them (or in some versions eating them) – trigger the innermost insecurities in the conservative psyche.

Hence, the need for a strong father figure, who will reinforce traditional social mores and hierarchy, at the expense of diversity and democracy.

What’s not to like? Protecting children from abusers is something that any and every sane person would want to do. And it’s a perfect justification for authoritarianism, in code.

QAnon is a secret knowledge that gives its believers a feeling of belonging. It bestows a sense of quest on its devotees, giving meaning to the declining quality of life in neoliberal societies.

It also comes with the rhetorical advantage that any attempt to offer some sort of critical perspective reads like a minimisation of threats faced by children, IE the body politic.

QAnon similarly jibes well with the utopian/dystopian pairings of the conservative imaginary. The commitment to protecting children from a shadowy threat is not dissimilar to fearing that non-whites are coming up from the south to take our (white) women.

That awkward moment when there’s so much antisemitism and racism on display at the right-wing Nazi rally that you need a guide. https://t.co/7GCIbGAVE0

QAnon is not limited to the United States. It has made inroads in the United Kingdom and especially Germany, where it has been readily taken up by new right-wing movements such as Querdenken 711 as well as established fascist parties like Alternative für Deutschland.

But it is in the US that QAnon’s effects have been most profound, not least because of the profound anti-intellectualism in American life about which Richard Hofstadter wrote so astutely.

It is liberal elites and ivory tower eggheads that have allowed the moral fibre of the country to decay. It was just this rot that the anti-intellectual anti-elite Trump was put in play to stop.

There is simply no percentage, from the perspective of today’s Republican office-seeker, in trying to disabuse voters of any kind of belief that is going to encourage them to hate Democrats.

Fact-checking is simply not done by far-right media anyway, and attempts to do so merely serves to identify one as a cuck and a traitor.

The prevalence of this sort of magical thinking is a problem for both Republicans and Democrats respectively, in slightly different ways. For both parties, the question is one of utopia.

Among Republicans, QAnon is, to borrow from novelist China Mieville, a kind of apocatopia, in which the gravity of apocalypse calls forth the birth of a new, more virtuous and meaningful order.

For Democrats, the only utopia is soulless neoliberalism: rational technocracy at the top of the income distribution, brutal competition for the scraps of the global market at the bottom.

The repressed longings of Democratic voters for something approximating the 1960s goes a long way to explaining the popularity of Barack Obama, with his message of undifferentiated “hope” obscuring the fundamental conformity of his policies with neoliberal nostrums.

Obama’s failure to deliver anything new and Hillary Clinton’s promise of more of the same similarly explains why so many Obama voters (probably including Ashli Babbitt) seized on Donald Trump is a promise of something different.

Babbitt’s death resists impulses toward simple explanations. Many on the leftward end of the political spectrum like to characterise her and other QAnon supporters as insane.

The analytical problem is religion. Once one accepts the starting points of QAnon, it’s hard not to follow where it leads. It’s fundamentalism in disguise.

Still, no one forced Ashli Babbitt and her colleagues into the Capitol building. No one forced her to try to climb through a window on the other side of which were drawn weapons.

The decision was Babbitt’s, and so was the responsibility, although given how cooperative the cops had been, she might be forgiven for thinking they wouldn’t have fired on her.

But at its base, Ashli Babbitt’s crimes are rooted in a media culture that spins out falsehoods for profit, and a Republican Party willing to harvest them irrespective of the cost.

The neo-Nazi martyr cult around Ashli Babbit is a thing to behold. She’s perfect for them: both mother and warrior as well as an ideal representation of white womanhood in need of protection. Best of all: she can’t speak up and challenge any of the ideas they’ve put on her. pic.twitter.com/2cXpsNkLyf