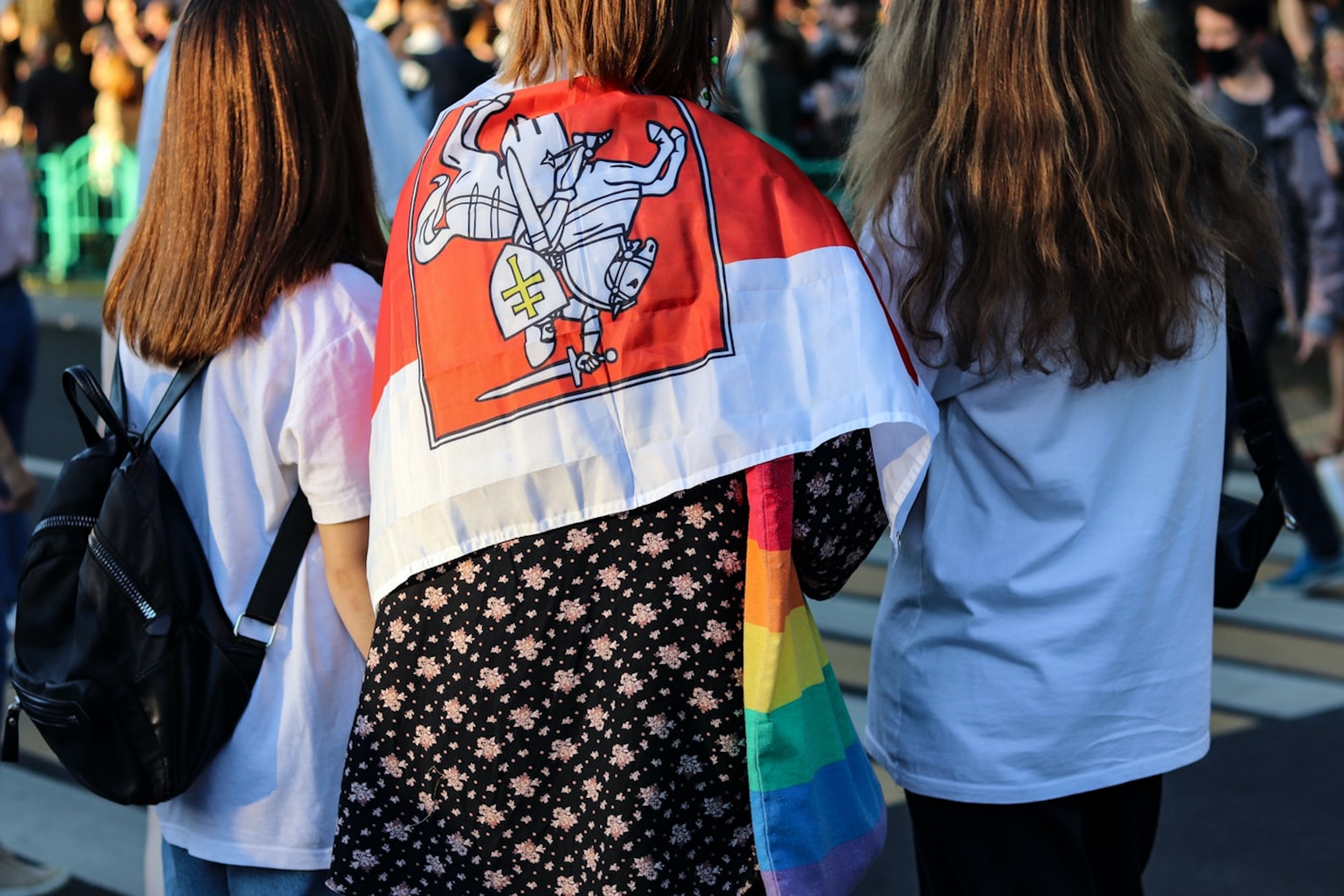 In Belarus, demonstrators continue to resist and protest, refusing to recognise the results of the 9 August presidential election in which Alyaksandr Lukashenka claimed a sixth consecutive term.

Every Sunday, massive marches continue to take place in the capital Minsk, some being the country’s largest demonstrations since the restoration of independence in 1991.

A new kind of protest is developing: residents of a few high rises on the outskirts of the city gather between their buildings, and march displaying their own local visual identity based on old national symbols.

National Symbols Strike Back (and Win)

For months, the brutality of the police has been concentrated mostly in the city centre, where the movement started in August, and where most of the Sunday marches also take place. Media sources such as Nasha Niva now estimate that over 30,000 people have been detained since the protests began.

Independent monitoring initiative Project 23.34 has examined over 3,200 detention cases. One-third of the respondents, most of them under 30 years old, were subject to physical violence. 144 political prisoners remain in jail. This is why, in order to overcome the trauma and yet to continue resisting state violence, part of the protest has moved to local neighbourhoods.

What hasn’t changed though, is the reference to an old, yet powerful, symbol: the historical, white-red-white Belarusan flag. Given that the authorities use a green-red flag, they never expected to see the white-red-white flag on the streets of Minsk and other major cities across the country.

Precisely because it was demonised by the authorities, in recent years, protestors decided to claim it as a symbol of their opposition to Lukashenka, to dictatorship, and of solidarity, giving it a new meaning.

So once it started to reappear in the streets, Belarusans started creating very local variants of the white-red-white flag for their districts and neighbourhoods. In just a couple of weeks, cities and towns, and sometimes even streets in Minsk, came up with their own, new flags.

Local identity is, indeed, strong in Belarus, a society steeped in peasant culture. There are now hundreds of these flags, which are printed in different formats and sizes, and adorn windows, walls, but also cars, protest signs, and clothes.

What is particular is the process of “desacralisation” of historical symbols: the new flags and coats of arms relate to modern-day, popular culture, as well. For example, the industrial district of Semash in Homiel, Belarus’ third city, adopted the figure of a gopnik, a figure of urban subculture associated in former Soviet cities with poor education and background, and specific music and dress codes.

On 24 November, 31-year-old Raman Bandarenka confronted a group of strangers who had arrived to remove the white-red-white ribbons in his Minsk courtyard. He was beaten and later died in hospital.

The white-red-white ribbons in Bandarenka’s courtyard were just one expression of this hyperlocal activism. Initially, courtyards like these served as refuges during the first days of protest. Their inhabitants assisted those who were fleeing riot police by hiding them. Today, protesters are reclaiming the urban space by using them to organise sporadic and decentralised acts of civic resistance.

Today is the 40th Day after death of #RomanBondarenko.

Roman was severely beaten for protecting national symbols in his courtyard
Shortly after being brought to police he was transferred to the hospital where he died without gaining consciousness#RomanBondarenko40Days #Belarus pic.twitter.com/FJ7Gpovpjv

Some are coordinated over the platform Dze.chat, an interactive map showing local Telegram channels, the encrypted messenger service that is most favoured in Belarus.

The project, which was inspired by urban blogger Anton Matolka, quickly became an indispensable tool for local communities’ self-organisation. It was a logical continuation of protest marches in suburbs, which had never happened before in Belarusan history. The courtyards thus started organising their lives themselves.

The newly created flags triggered public interest in understanding their imagery, and protests invited poets, musicians and cultural creatives to stage concerts, lectures, workshops and film screenings, something unprecedented in Belarus. As with the case of Bandarenka, some of those events did not go well. On 21 September, the rock musicians Alyaksandr Pamidorau and Lesley Knife were arrested and spent several days in prison.

But some actions have also gained national popularity, and have a second life online. The Yanka Kupala State Theatre, a major cultural institution in the country, resigned en masse in August after its director, Paviel Latushka, was fired for supporting the anti-Lukashenka protest.

The now underground actors have since become the heroes of the courtyards. Their YouTube channel, with nearly 150,000 viewers, is growing in popularity. Rock band J:Mors also held an impromptu concert on a balcony on 12 September, narrowly evading arrest. The performance can be viewed on this video:

The square hosts a mural depicting two DJs who were detained by police after playing Viktor Tsoi’s famous song “Peremen” (“Change” in Russian) at an official event, in reference to the protest culture at the end of the Soviet Union. The mural has been guarded by police, vandalised, and painted over many times.

Not least, the Square of Changes was where Raman Bandarenka was last seen alive. The courtyard’s new identity is a powerful source of resistance and inspiration for self-governance. Such locations are now gradually gaining public use due to popular sayings, online imagery, and even their use in newspaper headlines.

All these natural, grassroots activities are creating a new Belarusan society. The process goes the way it should: from low and local to high and national, and even global.

Delightful #graveyard of #darkhumor ,#humor as #protest in #Belarus — Americans ought to appreciate this #art concept for #Halloween with #coronavirus & #fascism on the docket. https://t.co/0iR9CDP2wi

Remaking Belarus is made possible through a partnership with Transitions. This article originally appeared in GlobalVoices and is reprinted with their permission. Photograph courtesy of Jana Shnipelson. Published under a Creative Commons license.