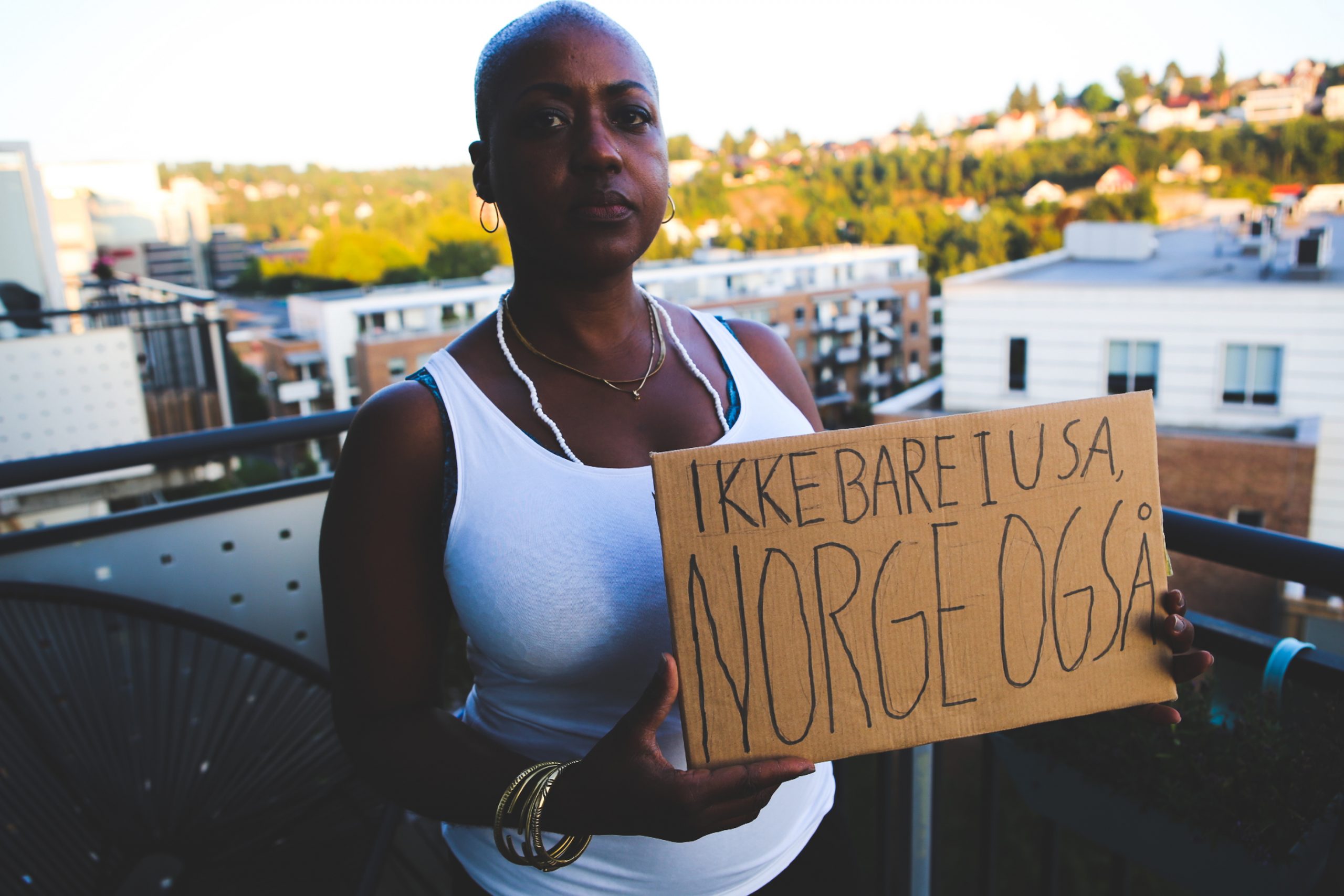 Not Just in the USA, Norway Also.

As the latest anti-racism chants fade from Norwegian media headlines, rights advocates in the Scandinavian country are exploring ways of continuing the discussions that started on social media and led to protests.

Nowhere has that been more apparent than in Oslo, where activists took to the street last summer following the brutal murder of African American George Floyd, in Minneapolis, on 25 May.

Sing a song full of the faith that the dark past has taught us,

As Michelle Tidsel read out the lyrics of the civil rights era anthem “Rise Up”, the crowd gathered in Norway’s capital echoed with chants that set her heart thumping.

The historic weight of the poem, first recited in 1900 by pro-civil-rights students in the United States, was apparent to the young protestors who gathered 120 years later, across the pond.

Tisdel originally from Houston, Texas, also the home of George Floyd, the Black American man who was choked to death by police officers in the US, had been fretting in the lead up to the June solidarity march.

How could she effectively deliver the message of Floyd to an audience that was largely removed from the particular social injustices that Black Americans experience?

Instead, Tisdel was struck by how many families attended with individual hand-made placards with different messages. “There was a multi-generational aspect to the discussions taking place between the younger and older members,” she recounts.

This ‘butterfly effect’ of the fight for racial justice that Michelle Tisdel witnessed in Oslo has spanned centuries and geographies. It re-invigorated late May of this year when the killing of George Floyd triggered mass protests in the US.

Nationwide calls for racial justice and police accountability burgeoned into global calls for solidarity across Europe, summoning more than 15,000 people to gather in the heart of Oslo.

“What also made a great impression on me were the narratives of the different speakers and the different touchstones (innfallsvinkler) that connected to the issues of George Floyd, structural inequality and racism,” adds Tisdel.

Rahwa Yohannes, at the African Student Association, had pulled together an impressive list of speakers, secured permission for multiple locations and mobilised the march within five days, along with ARISE, an Oslo-based African rights organisation.

“For many in Norway, police brutality against minorities isn’t recognised as a problem, yet we have widespread police profiling of people of colour, abusing their power in many ways,” explains Yohannes.

Quickly following George Floyd’s killing and the outpouring of fury in the US, Yohannes knew that this new wave of activism had to be seized, and applied to the Norwegian experience.

But most who were planning to attend, like Martin Zondag, a journalist for state broadcaster NRK, expected a tame event. With pandemic measures forbidding groups of more than 50, many residents away on holidays and the rainy weather – the odds were stacked against a strong turn-out.

Only moments into entering the vicinity, Zondag realized he was following a several kilometre trail of people walking through the drizzling rain. Their chants reached a fever pitch as they gathered around the main stage in front of the Storting, Norway’s parliament, with simultaneous satellite events at the US embassy and other locations.

“Despite the nature of my work, I was surprised by the variety of speeches and the anger, understandably so, among those marching,” he says.

Martin Zondag feels fortunate to have witnessed one of the most diverse groups of people to have marched together in Oslo’s recent history. As he spoke to protesters, he sensed strong solidarity for the global calls of Black Lives Matter (BLM), but also an explicit acknowledgement of racial injustices in Norway.

“Anyone who says we don’t have racism here should have listened to the experiences the speakers had in Norway,” adds Zondag.

Rahwa Yohannes is no stranger to these stories. Over the past decade of living in Norway, as a student and a rights activist, she has seen the racism discourse in Norway shift gears, along with the diversifying demographics, especially in Oslo. The changes have at times pulled in opposite directions.

While public calls against racism are becoming vociferous, the diversifying ethnic makeup of Norwegians and visibly more Black and Brown migrants are also causing more fremmedfrykt (fear of strangers), as she describes it.

As Norway’s population becomes more multiethnic, Yohannes also points to the state’s infrastructure and dominant social attitudes which are designed for a homogenous population.

“They must adapt to and accommodate outsiders and minorities and their specific needs, as this is already a form of discrimination,” she says.

When such rigid laws and attitudes go unchecked, they lead to the type of gross “negligence”, as in the case of Eugene Ejike Obiora, who died of asphyxiation during a police arrest in 2006, Yohannes reminds.

As the anti-racism chants start to fade from Norwegian media headlines, Tisdel, Yohannes, and their peers are exploring ways of continuing the discussions that started on social media.

Following the success of the summer demonstration, Michelle Tisdel, an anthropologist who works at the National Library,  is using the quiet autumn months to document the event.

Tisdel has been collecting the hand-made posters of the marchers and the text of the various speeches as historical documents for the library and also curating a museum exhibition that will display them for viewers.

The anthropologist has founded “Lift Every Voice”, an initiative that will preserve the speeches and banners as artefacts which capture an important turning point in Norway’s battle for racial equality. They will also serve as educational tools for youth in Norway to grasp the identity politics of their generation.

“Part of my objective is to re-configure what identity politics mean in a specific context as the term has been misused or overused,” she explains.

Similarly, Rahwa Yohannes feels that “intersectional activism” is a term that is too often appropriated by different groups. But, she witnessed the overlapping causes culminate organically at the march between the different sub-groups of Black Lives Matter.

The different speakers presented varying histories and reasons for racism. Hence, solutions must be addressed within their contextual realities.

“For example, Deise Nunes who spoke of the women and LGBTQ communities in Brazil who are often side-lined during protests, Buntu Pupa,” Yohannes explained, “expressed the vulnerabilities of black men who are often dehumanised by state systems, and Mariam Hussein, who counters the popular narrative here that women in hijab are inherently voiceless.”

Through her new venture – an NGO called Manifold -Yohannes will tap further into the aligned goals of these peer groups, to collectively rally the justice ministry to establish concrete documentation standards for police arrests. Together, they will continue to approach Norwegian media outlets that have only skimmed the surface of race issues.

Rahwa Yohannes also hopes that further gatherings in solidarity with BLM will take place in Oslo, where Norwegians continue to address the local dimensions of racism on their own terrain.

This global-local connection emerging from Black Lives Matter reveals that many minorities, and particularly black communities, have not reached racial equality.

Mihir Sharma, an anthropologist who has studies anti-racism movements in the US and lives and organises in Berlin, sees more reciprocity between BLM and the mobilisation across Europe

In the German capital, where 100,000 gathered in support of George Floyd in June, the mood turned introspective, with activists tackling the realities of homegrown racism.

“Many here in Berlin see the newly formed Migrantifa coalition, which formed following the racially motivated murders of nine people of colour, as a remarkable moment for PoC self-organisation,” Sharma explains.

Despite the different roots of racial and social injustices, activists in the US and different European countries stand to learn much from each other’s approaches to activism.

“Although Black Lives Matter found resonance across the Atlantic in many spaces, instead of adapting a US metaphor to German conditions, the relationship between Black and Person of Colour movements has been of mutual exchange,” adds Sharma.

Similar to local versions of BLM across the United States and off-shoots across the world, Sharma explains that Migrantifa has formed local chapters in different German cities, with teach-ins and street mobilisation planned for different contexts.

“The coalition is here to stay, to educate and organise.”

This growing exchange between anti-racism groups across the two continents is materialising in more interconnected global, national and local coalitions that draw their strength from the diversity of their member organisations.

Such an integrated network of autonomous organisations would pave the way for civic participation that ‘thinks globally, but acts locally.’

The road ahead for those like Tisdel, Yohannes, and Sharma working towards racial justice is bound to meander in ways that they cannot yet predict.

But a momentous shift in public discourse has taken place, both in the US and in Norway. Over the last few months, Yohannes has noticed more minority youth voicing their concerns and majority youth supporting their stances.

Maintaining the torque of reform will require consistent efforts at parallel levels – local, national and international efforts on one end and civil, social, and political on the other. It is at the intersection of these forces that racial equality will form deeper roots.

Michelle Tisdel’s experience of documenting race politics in Norway and the United States chimes with Rahwa Yohannes’ approach as an activist.

While the racial injustices towards Black Americans are entrenched in a history of slavery and segregation, “one must learn to distinguish between the causes of racism and the similar issues that Black populations in different countries face,” explains Tisdel.

Indeed, activists and attendees of anti-racism protests across Europe are recognising the greater stakes.

Addressing the causes of systemic discrimination in their countries, before they form deeper roots, will be crucial to curb the “structural racism” that parallels the United States, both Tisdel and Yohannes explain.

A Norwegian version of this article was published in Samora magazine in September 2020. Photographs courtesy of Preethi Nallu. All rights reserved.