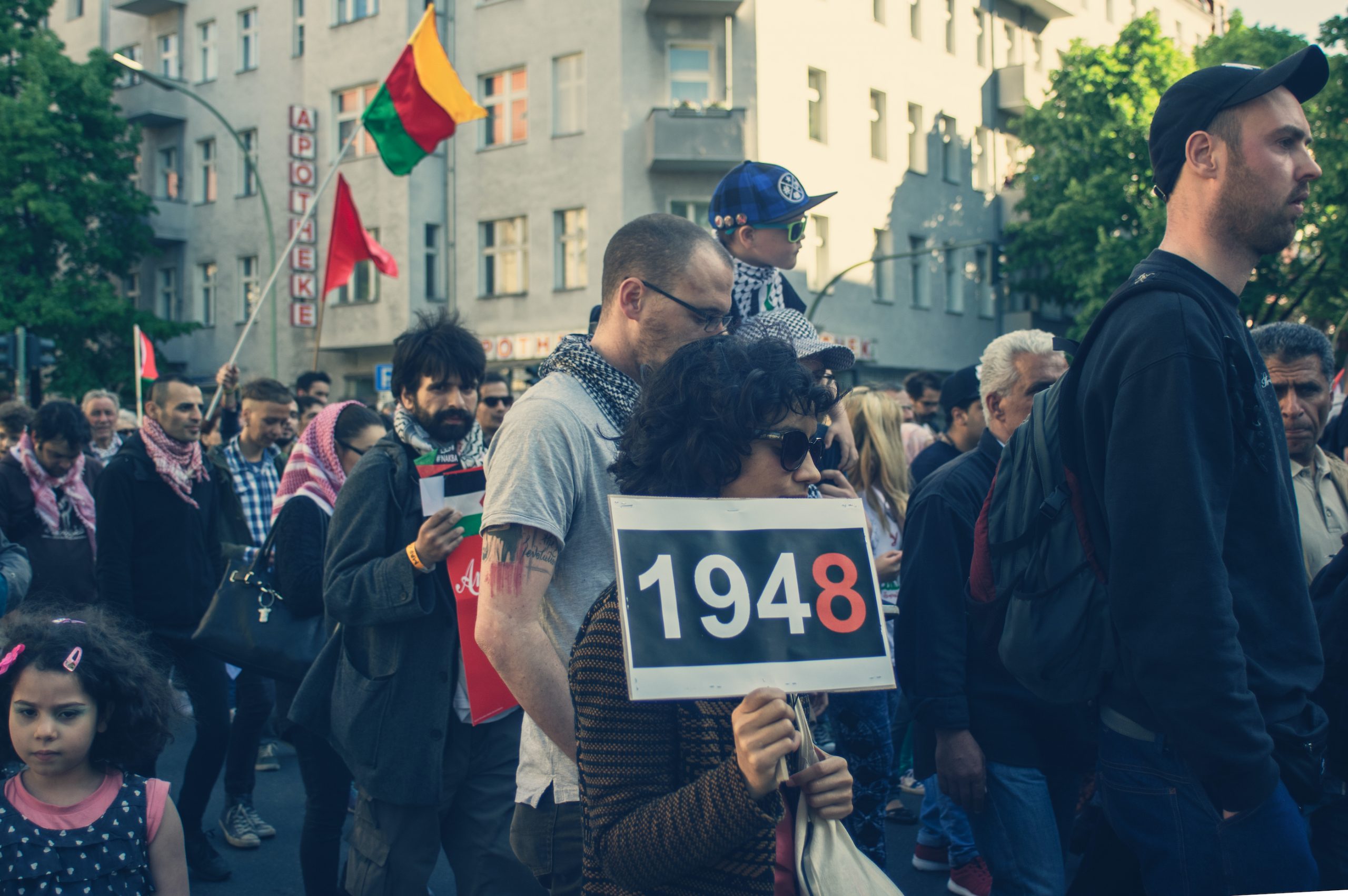 Jews and Palestinians in Germany

While the discriminatory nature of Philosemitism in Germany is not always obvious, due to a lack of knowledge of Jewish culture and politics, it is easier to recognise racism in the way Palestine solidarity advocates are treated.

It is no secret that alongside long-standing anti-black racism, European societies have shown increasingly clear Islamophobic tendencies over the last twenty years. Although 9/11 was not the first case of international Islamic terrorism, it galvanised world sentiment in a way that previous incidents had not.

Al-Qaeda’s attacks on the United States led to an increase in hostility to Muslims and the growing perception of any recognisably Muslim person (or non-Muslim assumed to be Muslim, as in attacks on Sikhs) as a potential terrorist. Whether on the streets or at airports, turbans and hijabs now guaranteed extensive and often intrusive security checks.

Although hate crime did not spike to the same extent in Germany, and the relative lack of firearms made the threat less lethal, the unexpectedly high influx of refugees in 2015 brought the simmering Islamophobia to the boil.

In the 2017 general election, the AfD became the largest opposition party in parliament, when their campaign had revolved around the spectre of a threat to Western civilisation represented by migrants from the Middle East and North Africa.

The massive increase in refugees coming primarily from Syria, Iraq and Afghanistan raised fears of both Islamic terrorism and sexual predation, and any instances of either behaviour were a gift to the xenophobes.

There was also another threat supposedly issuing from these refugees, however: that of Antisemitism.

While less in the public eye than the other factors, conservatives and supporters of Israel increasingly equated the racism with migrants from Middle Eastern countries.

An incident in 2018 seemed to support this belief: two men wearing kippas (Jewish skullcaps) were insulted and attacked with a belt by a young Palestinian refugee from Syria.

As it turned out, the two were not actually Jewish (one was Palestinian-Israeli and the other Moroccan-German), but were wearing kippas as an experiment to test recent claims that it was no longer safe to be recognisably Jewish in Berlin.

This detail, which was publicised less than the attack itself, makes the implications of the incident all the more serious.

It is no surprise if, to such a person, a Jew is the same as an Israeli, and an Israeli is viewed with hostility.  This was evident in the language used in the belt attack. The Palestinian yelled “Yahudi” (Jew), meaning ‘Israeli’. Germans took it to be racist.

To explain is not to justify, and the young man expressed remorse. But the damage was done. It was assumed that there were many more Jew-hating Arabs where this one came from, and that they could easily be Islamic State sleepers waiting to carry out terrorist attacks.

A new consensus in Germany solidified: Palestinian refugees are Antisemites seeking the destruction of Israel. By no means new to the Arab-Israeli conflict, the domestic elevation of the idea helped tilt public discourse further towards Israel.

The Palestinian cause has always faced a struggle for legitimacy because of its association with terrorism. The strength of this association means that even without the terrorism, its supporters still have to deal with this preconception. This was no different.

A year before the belt attack, in the run-up to the 2017 general election, there was a televised debate between Angela Merkel and the Social Democrat candidate, Martin Schulz. The refugee issue was still hot, and Merkel’s stance, which was more liberal than that of many fellow conservatives, made it difficult to criticise her from the left.

Perhaps this is what induced Schulz to echo the US platitude of a ‘bipartisan consensus’ on Israel and state that there are young Palestinian men ‘who come to us having been brought up with a deep-seated Antisemitism’.

They must be told loudly and clearly that ‘there is only a place for you in this country if you accept that Germany protects Israel’, said Schulz.

Possibly Schulz felt a particular need to prove his pro-Israel credentials after being scorned in 2014, when he visited the Knesset as European Parliament President and referred to unequal conditions for Palestinians, specifically with reference to water access in the West Bank.

Although the outrage – how dare a German lecture Jews on moral issues – came mostly from right-wing Israelis and was considered excessive by many in Europe, this may have been enough to make Schulz lose his taste for such interventions.

It is ironic that, given the centrality for this discourse of Israel’s so-called ‘right to exist’, pro-Israel voices are increasingly challenging not only the right of Palestine and Palestinians to exist, but the very fact of their existence and the right to mention it.

Assertions that there is ‘no such thing as Palestinians’ are certainly not new. Israeli Prime Minister Golda Meir made them publicly in 1969.

With the growing video footage of violence against Palestinians in the new millennium, some Israel supporters adopted a new term: ‘Pallywood’.  It was coined by Richard Landes, who made a short documentary film of the same name in 2005.

In it, he falsely claimed that the shooting of the twelve-year-old Muhammad al-Durrah in Gaza in 2000, almost certainly by Israeli soldiers, had been a staged hoax, and argued that this is a standard form of Palestinian propaganda.

The case was even taken to court, ultimately leading to charges of defamation against a journalist who promoted the denial. The slur became popular among those who take it as read that Palestinians are not only Antisemitic terrorists but also born liars. Landes’s long-debunked claims about the al-Durrah killing are still occasionally cited as evidence in online exchanges.

With the proliferation of smartphone videos, it has become harder to deny Israeli human rights violations. Now that ‘Pallywood’ is everywhere, proponents of the theory – from the Twitter commentariat to senior Israeli officials – must either work overtime to smear victims or redirect their efforts to other forms of delegitimisation.

So what is the next level? Having claimed that Palestinians do not exist, or that even if they do, they still lie about what happens to them, one can then assert that the word ‘Palestine’ is Antisemitic in itself.

This is what was suggested in mid-October in the description of an event scheduled by the Konrad Adenauer Foundation, entitled ‘“Palestine” – History and Problematics of a Term’.

The announcement, which was deleted after the event’s cancellation, referred to a demonstration that had taken place in Frankfurt on the third.

Under the title ‘Moria Befreien’ [Free Moria], the local chapter of Migrantifa, a young anti-fascist and anti-imperialist movement, had organised a protest against the conditions endured by refugees on the Greek island of Lesbos after the Moria camp was burned down.

Other activist groups were affiliated, including Free Palestine FFM (the abbreviation for Frankfurt am Main), whose members at one point chanted “From the river to the sea, Palestine will be free”, a familiar refrain at pro-Palestinian demonstrations.

This slogan is controversial because of conflicting interpretations. Some claim that by referring to the entire region from the Jordan River to the Mediterranean Sea as ‘Palestine’, it suggests that the intention is for the state of Israel to be erased and all Jews either expelled or killed. It is true that some Palestinian extremists have used it in this way.

The opposing claim is that far from demanding a de-Judaisation of the region, the words simply mean that the area historically known as Palestine until the foundation of Israel in 1948 should become democratic, with both military rule in the Occupied Territories and the systemic discrimination towards Palestinian citizens of Israel (despite nominal democratic rights) being abolished in favour of equality for all.

There is certainly room for discussion about the utility of a slogan that evokes conflicting associations, and will most likely lead to disputes that distract from the actual issues. The more time activists have to waste explaining what they mean by it, the less public focus there will be on the dispossession, disenfranchisement and killing of Palestinians that has been documented for decades.

But the existence of these differing interpretations was entirely absent from the text in the Konrad Adenauer Foundation’s event description, which stated that it “belongs to the vocabulary of Antisemites and Israel-haters”.

This led Uwe Becker, Frankfurt’s mayor as well as president of the German-Israeli Society and Commissioner for Antisemitism in the State of Hesse, to file charges against those involved.

The claim of Antisemitism went beyond the slogan chanted at the demonstration, however. The event description also stated that “the vast majority of people in Germany and other European countries are unaware of the Antisemitic associations behind the term [Palestine]’, and that ‘the widespread Israel-related Antisemitism of today is directly tied to this.

Not surprisingly, the Konrad Adenauer Foundation’s Palestine branch was taken aback to find its parent organisation promoting this view, and various groups demanded the event’s cancellation, decrying this racist erasure of Palestinian identity.

In a rare surrender to pro-Palestinian pressure, the foundation indeed cancelled the event and described the wording of the text as “open to misunderstanding”.