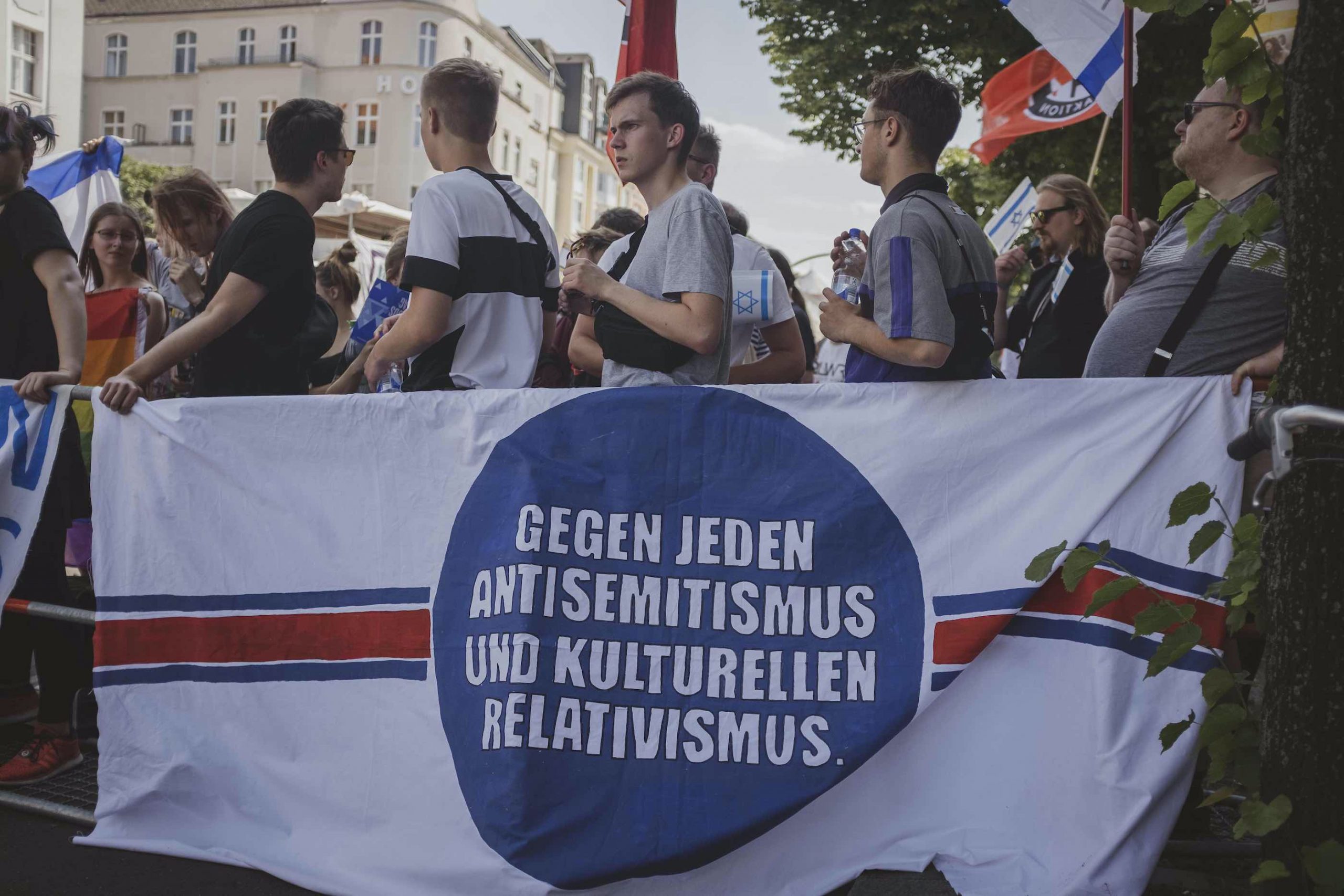 For those on the Anglophone left, the issue of Antisemitism has taken on increasing significance in recent years.

Not only as a social ill to be fought. But as an issue that has been used to attack those who express support for the Palestinian cause and cast doubt on the democratic credentials of Israel. Whether in its very foundation as a state, or its current political landscape.

Such bad faith campaigns were a central factor in the demolition of Labour Party leader Jeremy Corbyn in the United Kingdom and were even detectable in the United States when Bernie Sanders, a leftist senator from Vermont, was criticised for not loving Israel enough.

The former Democratic presidential candidate had drawn attention to the plight of Palestinians, and their plight in Gaza. Conservative Jewish groups responded by hinting that, though nominally Jewish, Sanders wasn’t on the team.

At the same time, the increasingly open racism in Donald Trump’s America meant that white supremacists were unafraid to show Antisemitic antipathy towards him. Thus, it was possible for Sanders to be too Jewish for some, and not Jewish enough for others.

The situations in the United Kingdom and America have been discussed at length. But what of the situation in Germany?

Infamous as the motherland of the Holocaust, which has been invoked to justify Israel’s 1948 founding, Germany naturally has a sensitive position.

There is the obvious issue of guilt. Although many Nazis remained in senior academic, bureaucratic and political positions after 1945, Germany made official gestures of atonement and paid reparations to Israel (though much of the money never reached Holocaust survivors).

Germany has continued to insist on its special responsibility towards Israel, with Chancellor Angela Merkel stating that its security is part of Germany’s Staatsraison – ‘reason of state’, meaning a guiding principle and key determinant of public policy.

Of course, this policy also involves lucrative defence deals, such as the sale of missile-firing submarines. Like any canny political actor, Israel’s government knows how to exploit this.

As Ha’aretz reported in 2015, “A spokeswoman for the Israeli embassy in Berlin recently told Israeli journalists it was in the country’s interest to maintain German guilt about the Holocaust, and that it isn’t seeking full normalization of relations between the governments.”

Naturally, these remarks were made behind closed doors. The spokeswoman in question, Adi Farjon, denied them when pressed afterwards.

The influence of Israel and its supporters on politics is another sensitive issue. On the one hand, there is the centuries-old trope of devious Jewish influence, whether by medieval courtiers or modern bankers (most famously the Rothschild family), and philanthropists such as the Hungarian-American George Soros.

A Holocaust survivor who supports progressive political causes through his Open Society Foundations, the name ‘Soros’ has become a standard Antisemitic dog whistle on the Euro-American right, along with rather meaningless terms such as ‘cultural Marxism’ and ‘globalism’.

On the other hand, the US has an influential and well-funded Israel lobby, most prominently represented by the right-wing organisation American Israel Public Affairs Committee (AIPAC), which does what all lobby groups do: it tries to persuade politicians to act in its interests.

AIPAC’s aggressive lobbying played an important role in the Trump Administration’s withdrawal from the Joint Comprehensive Plan of Action, which Barack Obama agreed in 2015 to lift some sanctions on Iran in exchange for the pledge that the country would not seek nuclear weapons.

This brings us back to Germany, which does not even have a smaller lobby. In fact, it has no comparable lobby. And it requires none, because of how the country translates its obligation to redress the Holocaust into broad public support for a right-wing version of Israel-Palestine.

This is why German politicians do not need to be pressured behind closed doors to adopt conservative talking points on Israel. Many have internalised them as part of their political socialisation. This is de-Nazification to them. There is no alternative Israeli-Palestinian politics outside of that framework.

The current foreign minister, Heiko Maas, professes that he entered politics in the post-Auschwitz spirit of ‘Never again’. The same motto was invoked by one of his predecessors, Joschka Fischer, to justify involving Germany in the NATO bombing campaign in Yugoslavia in 1999, during the Kosovo War (for which he felt the wrath of his party base).

It has become a commonplace slogan in the culture of ethically-legitimised imperialism as much as for sincere remembrance, and these two overlap in the case of Israel. For political leaders in Israel since the state’s foundation, it has meant that Jews will never again be victims and must be in a position to destroy their enemies before they rise up against them.

The Zionism that built Israel as a state also gave birth to the ‘New Jews’, the soil-bound founders and warriors who would take back all the rights denied them for centuries in Europe. Hence the potent symbolism in the kibbutz movement of agricultural work, after many European Jews had traditionally been forbidden to own and work land.

This ideology of strength meant that Holocaust survivors had to deal not only with their own trauma but also with the stigma of weakness and victimhood attached to them by those who had not shared their experience and saw them as cowards.

In Germany, of course, the imperative of ‘Never again’ had less martial overtones. It stood for atonement – in public, at least – and ethical behaviour, and declared that it would henceforth be all the more important to protect Jewish life after almost annihilating it.

An aspect of the Holocaust that is discussed less often than the machinery of murder and the suffering it inflicted on Jews and other minorities is the gaping absence it left behind. It was not only individual Jews who had been erased but entire communities and strains of European culture.

Whether traditionally observant rural Jews or secular, well-educated and successful Jews who had always thought of themselves first of all as German, Polish or Dutch, little remained of these groups and their social ecosystems.

America benefited especially from the accompanying brain drain since well-connected and affluent people were naturally in a better position to emigrate and establish themselves there.

Many of the less well-off escaped to Israel (Palestine, until 1948), where it was a constant concern to secure an irreversible demographic advantage over the indigenous Palestinian Arab population, even after the expulsion of some 750,000 in the 1948 war.

And so this lacuna remains in Germany. There are still some operating synagogues, many of them reactivated in the last few decades. But there are also many former synagogues, inconspicuous houses with small plaques to commemorate something that is no longer part of the national landscape.

In this setting, what kind of normalisation can there realistically be between non-Jewish Germans and Jews?

There are currently some 100,000 Jews living in Germany. Around three-quarters of these belong to families who migrated to Germany from the former Soviet Union in the 1990s to escape Antisemitic discrimination (one of many ironies in all this).

In the last decade, Berlin has become a popular destination for young Israeli Jews unable to bear the increasing normalisation of far-right politics in their home country. This means that the majority of Jews in Germany, who were often regarded as foreigners of a kind, are now literal foreigners; Jewishness is doubly alien.

The combination of this alienness with a national sense of guilt, or simply a sincere wish to do better, results in a form of philo-Semitism whose kinship with Antisemitism easily comes to the surface.

In a country with 80 million inhabitants, most Germans have never met a Jew, which has sometimes led to such outreach initiatives as the eye-catchingly named ‘Rent-a-Jew’ project.

This unfamiliarity makes it easy for bigots to harbour an abstract Antisemitism unaffected by personal encounters. But it also leads the well-meaning to make assumptions about ‘the Jews’ in an idealised form.

Many Germans assume that ‘Israel’ and ‘Jews’ mean much the same thing. To them, a Jew is surely either from Israel or has a special bond to it, which is why they think that Germany’s passionate support for Israel is the ethical duty of the country that exterminated six million Jews.

And this is precisely what Israeli Prime Minister Benjamin Netanyahu wants. One of his aims is for ‘Jewish’ to become simply the nationality of Israel, for ‘Jewish’ to be to ‘Israel’ as ‘French’ is to ‘France’.

This means, of course, that Israel’s almost two million Palestinian citizens (21% of the total population) have an increasingly precarious status as persons who are not granted the right of national self-determination, as laid down in the Nation State Law of 2018.

In this environment of uninformed concern, it is still difficult to make people understand that Zionism, like Israel, is not something crucial to the identity of every Jew.

Because in Germany, as in the UK, many people are more familiar with the Antisemitic use of the word ‘Zionist’ to mean ‘Jew’ than they are with either Zionism or Jews, it is quickly assumed that to question the ethical justification for Zionism is to question Israel’s ‘right to exist’.