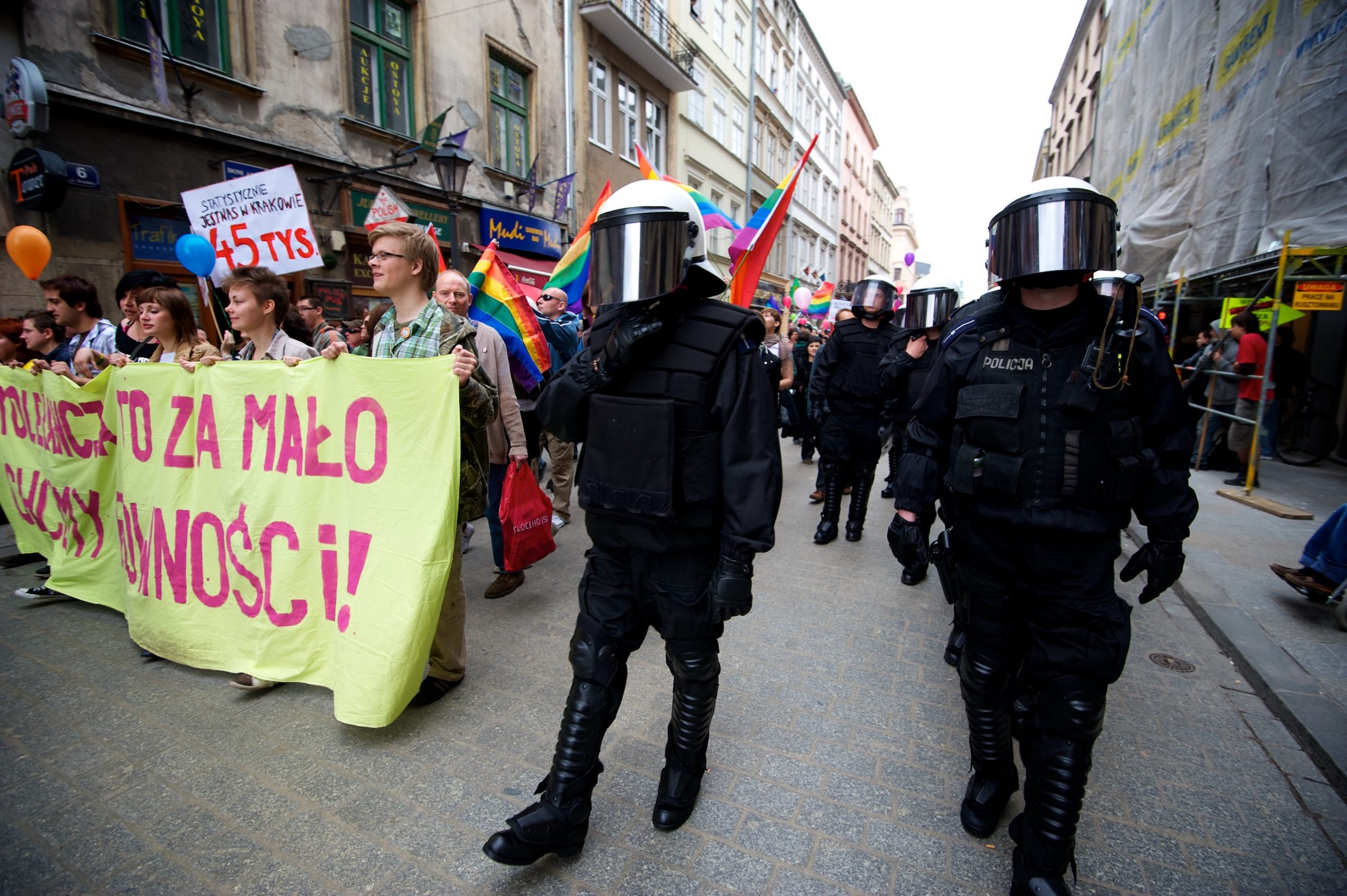 The three prisoners in the cell will spend the night at the Mostowski Palace, where the Capital Police Headquarters is located.

Once there, Linus Lewandoski is placed in a two-person cell with another political prisoner, who was jailed for being at the wrong place at the wrong time.

They want to fall asleep, but the light is on all night. Each prisoner gets a mattress, a sheet and a blanket.

None appears to have been changed or washed, despite the coronavirus pandemic. Linus asks if the light can be turned off. “No!”, he is told.

Linus thinks of his partner, Rafał. They proposed to one another and consider themselves fiancés.

Linus follows Rafał’s whereabouts on his phone and vice versa. Now it’s impossible, as Linus’ phone has been confiscated.

He’s frustrated he hasn’t heard from his lawyer, Adam. They’ve known each other for years. “He should talk to me! I warned him I’d probably need him. He’ll probably come tomorrow,”

Ever since Linus’ arrest, Rafał moves every stone in town looking for his partner. He convinces the attorney that Linus needs help.

However, the police do not want to tell anyone about Linus and the other detainees’ whereabouts. Lawyers and opposition MPs, and activists, are looking for them.

Through the window of the station, Platforma Obywatelska (Civic Coalition) MP Klaudia Jachira reads the names of the detainees to worried relatives.

This is how Rafał finally finds out about his fiancé being transported to Mostowski Palace.

However, at 3 AM, police officers inform Patria Razem (Left Together) MP Agnieszka Dziemianowicz-Bąk and Linus’ lawyer that no one from the demonstration is being held at Mostowski Palace.

Moreover, they indicate that Linus is in police custody at Wilcza street. Meanwhile, Linus is trying to sleep with the light on.

The lawmakers leave. Activists looking for missing detainees realise that there are no beds at the Wilcza street station. No one is being held there.

Some begin to fear the worst.

Linus gets a sandwich and a half, toast and pâté, for breakfast.

The 27-year-old says the sandwich certainly doesn’t meet the statutory 780 calories. He has been hungry all night. He’s still hungry after breakfast.

Linus is bored. He can borrow newspapers. There are books, brought privately by a guard, and twenty issues of Men’s Health.

But how can a millennial IT scientist be without a phone this long?

Lunch is richer now, but Linus is still hungry. He gets potato soup with meatballs. The warden gives him an extra slice of bread.

Linus will remember this gesture. There’s so little human kindness behind these walls. Yet this palace was once a parlour for literature and music.

The police say that after lunch, representatives of the Helsinki Foundation for Human Rights will come by. A couple of lawyers from the Ombudsman’s office arrive instead.

Linus tells them about the bad light at night, about his arrest. They ask about his access to a lawyer and why he’s without a shirt.

A moment later, he gets a sweatshirt from the guards, which will be useful as a pillow.

Linus gets nervous that time is running out and that his lawyer is still not there. Suddenly he hears a familiar voice. He walks to the door. It’s Linus’ attorney, Adam.

Adam suddenly goes silent. What happened? Why did he leave without talking to Linus?

Meanwhile, there’s been a search party outside the police station since morning. The police still haven’t told anyone where he is.

Finally, Linus is identified by representatives of the Ombudsman. Patria Razem MP Magdalena Biejat is informed, who then notifies party members, who will tell Rafał.

A gigantic weight is lifted from Rafał’s heart. The chain ends with Linus’ attorney, who receives the memo at 2 PM.

At 4 PM, Linus and the policemen go back to the police station on Wilcza Street for questioning.

He finally meets with his attorney. The two look into each other’s eyes.

Adam knows that Linus wanted to meet with him. Linus knows that his lawyer did not leave him alone.

The court informs Linus that it wants him to appear as soon as possible for a hearing about his arrest complaint.

Only now does Adam find out that Linus complained about his detention. The lawyer goes to court separately and Linus is accompanied by the police.

None of them have time to prepare. The hearing is less than 20 minutes long. The break before the sentence is pronounced is 40 minutes.

Linus can finally eat something. But, for once, he’s not hungry.

The court rules that the police had the right to arrest him, but failed to allow Linus access to a lawyer for 20 hours.

However, the court does not release him. A handcuffed Linus kisses his fiancé in the courtroom. It’s the first time they’ve seen each other since before his arrest.

Linus goes back to Wilcza. The prosecutor wants to see him at the police station. Nobody knows why.

Linus’ lawyer finds out 30 minutes before their meeting starts. He turns the taxi around, rushing to get there.

The prosecutor invites Linus to be interrogated. Linus declines. The police request that Linus be released under supervision. The prosecutor agrees.

A week later, on 15 August, Rafał and Linus return home after an evening out.

I have a broken tooth and a black eye, Rafał has bruises. The offenders ran away.”

He includes a selfie showing his injuries.