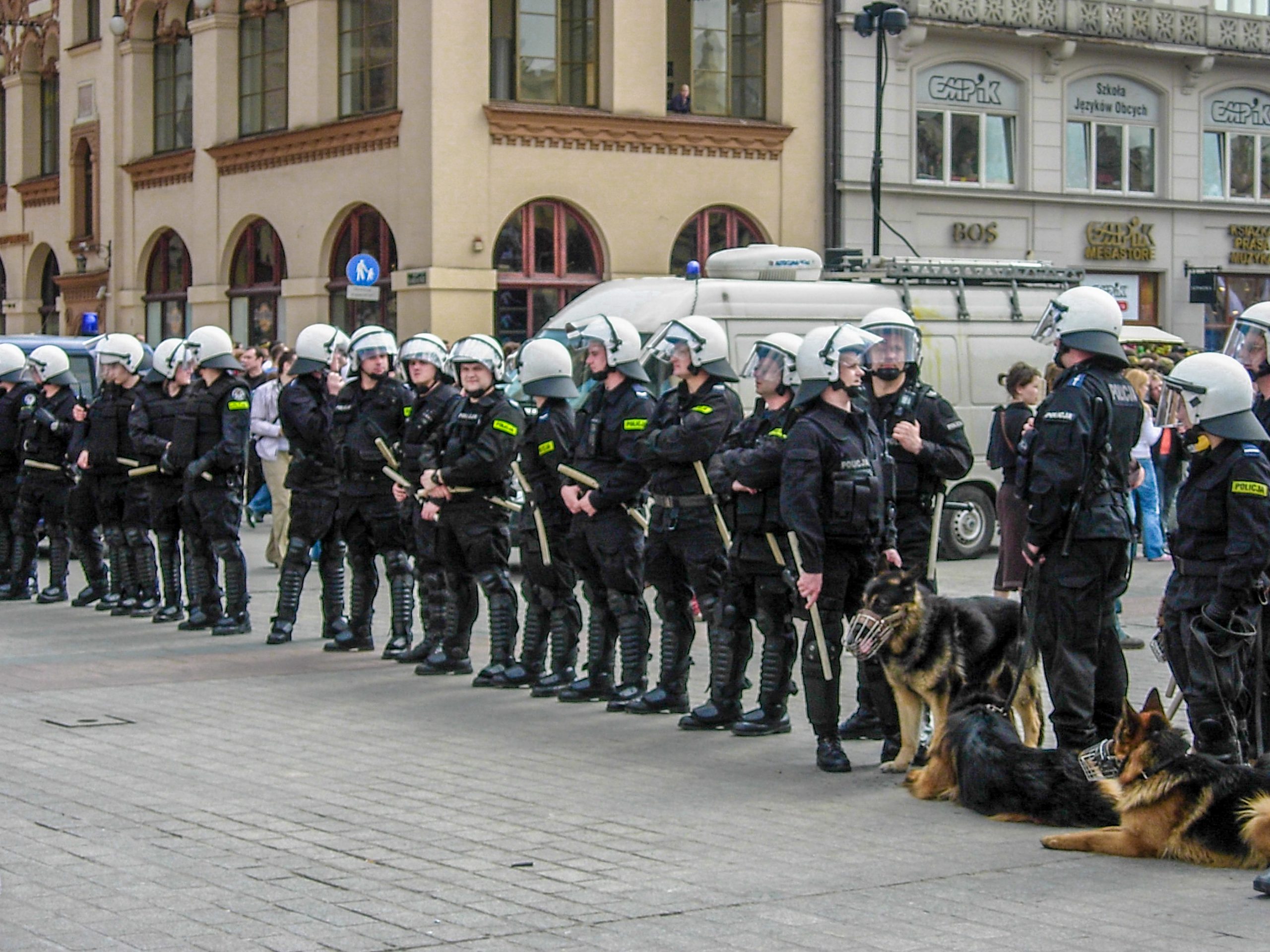 Linus Lewandowski is a political activist affiliated with LGBT advocacy organisations. He takes part in demonstrations, defending them from the extreme right.

Lewandowski took part in demonstrations against the arrest of nonbinary activist Margot Szutowicz. He was arrested and held in hiding by the police.

“I want the public to take an interest in this,” Linus told this journalist. “We’ve received strong support from people who haven’t been involved so far. Many of our friends and politicians who have not yet spoken are no longer neutral.”

As Lewandowski says, he fights “for equal treatment of all people by the state and against human rights violations as Margot’s rights were violated”.

This is the first of a two-part article, recounting how the police treated him on 7 and 8 August 2020.

On the afternoon of Friday, 7 August, Margot Szutowicz is to be arrested. In her defence, a large crowd gathers in Krakowskie Przedmieście street, in the centre of Warsaw.

Margot is ready to surrender herself to the police, but the police will not arrest her. The fact that they do not immediately respond is considered a victory by her supporters.

For a moment, it feels like a victory. The crowd is inspired to “go to Jesus”, i.e. to the Church of the Holy Cross, in front of which stands a statue of Jesus, to hang a rainbow flag.

The police are already there. One of them catches Margot and tries to take her away.

Linus Lewandoski, the hero of our story, is also present. He starts defending her.

After a while, an unmarked car drives up. Men in civilian clothes jump out. No badges are visible.

They pick up Margot. It looks like a kidnapping in broad daylight, in the middle of the nation’s capital.

Of the several hundred protestors present, not one approaches the police to report her abduction.

The LGBT community no longer trusts them to protect it from nationalists and the far-right.

Margot is already in the car. The driver wants to go, but a few people get on its roof, including Linus.

They say they did it to stop the vehicle from leaving. They fight for Margot like it’s a battle.

The kidnappers get support from uniformed officers. They start pulling demonstrators off the car.

When the cops pull him away from the car, Linus has the aerial in his hands.

Demonstrators block the vehicle. They want to win this dispute at all costs. They sit in front, and behind it. Linus sits down too.

For some 20 minutes, nothing happens. The police are regrouping, ready for a new strike. Officers are starting to pull people out of the blockade. One by one.

Once the obstacles are removed, the car disappears.

Act I: Linus Gets Arrested

Someone tells Linus Lewandoski that the police are keeping an eye on him, that they want to stop him.

He runs away for a while but comes back. “I want to support my sisters in the fight,” he explains.

The police surround a group of demonstrators. Outside their ring, there are 500 people present.

When the cops take a girl in handcuffs to their car, Linus runs up again, wanting to help her. Someone in civilian clothing throws him to the ground.

Linus tries to get away, but there are ten men fighting him now.

One cop presses Linus’ head to the ground with his knee. “Leave my head (alone),” shouts Linus, in a scene reminiscent of African Americans assaulted by police.

The cop lets go, but soon another one does the same thing. They have him.

The officer twists his hands, hurting Linus. They handcuff him.

Linus is bundled into a police car. He screams that the handcuffs are cutting into his body. It takes a few minutes to adjust the clasp.

The vehicle is blocked by the demonstrators. Someone is probably lying in front.

Eventually, the car is freed and is on its way to Wilcza Street. Linus wants to talk to his lawyer. “Later,” the police say.

Once they arrive at the station, Linus is forced to wait in the car. The cops are backlogged processing demonstrators.

Finally, it’s Linus’ turn. He goes with a policeman to a small room. He has to strip naked and do two sit-ups. But he’s not scared.

It’s different for the others arrested. He says the naked sit-ups are used to see if something’s hidden in the anus. This is a procedure normally used with drug dealers.

Perhaps it’s aimed at the transgendered, for whom the body is a more sensitive issue.

Not all the policemen like what they see, says Linus. In all likelihood, there are LGBT persons among the officers and guards present.

Police take photos of Linus because he has no ID on him. There are bruises on his face.

Linus is locked in a temporary cell for 20 minutes. The cops take him upstairs to prepare a detention report.

He asks to contact his lawyer. The cops ignore him for an hour and a half.

“Do you confess?” they ask Linus. He doesn’t know how to answer, as no one has charged him with anything yet.

Linus finally says that he won’t say anything without a lawyer present. He gives them the phone number for his attorney, Adam.

The cops call him. Linus overhears Adam asking if he wants to talk to him. Linus tells the police that he does, but is too far away for his attorney to hear him.

The cop tells the lawyer Linus doesn’t want to see him. After the phone call, a policeman informs Linus that “The lawyer will come – or not.”

Linus does not know what Adam told the officer.

Rafał is Linus’ boyfriend. They live together, and just moved into a new apartment.

Recently there was an interview with them published in Replika, a leading Polish LGBT community magazine. Rafał suspects that Linus has been arrested.

Thanks to an atypical first name, a policeman quickly confirms to Rafal that Linus is at the station. “The one with the odd name” is easily remembered by the cop.

Linus is given a release agreement to sign. It says that he has no complaints about his arrest.

He informs the officers that he won’t sign it because he intends to file a complaint. He wants to delete this sentence, but the police won’t agree.

The negotiations end with Linus’ complaint.

The cops still want him to specify his complaint. Linus doesn’t want to without first consulting his attorney. So the cops write that no reason is given for the complaint.

🏳️‍🌈🇵🇱New violence against peaceful LGBTQ-activists in Poland by the religious police.

LGBTQ-activists were beaten up by police officers protecting a campaign truck depicting the LGBTQ-community as pedophiles.

The police escort Linus to a temporary cell on the ground floor. Amidst the chaos in the station, they fail to take Linus’ handcuffs off, and Linus forgets to remind them.

There are three people without handcuffs in the cell. But Linus remains handcuffed.

It’s a while before Linus realises what’s going on.“Hey, why doesn’t somebody take (these) off?” he screams at the cops.

After 15 minutes, the officer who cuffed him notices he’s missing a pair of handcuffs. He goes back to Linus and removes them.

Back in the cell, the inmates can overhear “Release the detainees!” being shouted outside. Several minutes later, they suddenly stop.

The police vans arrive again. The cops call for the crowd to disperse.

Dozens of cops run towards the protestors and knock several of them out. They take them back to their vehicles and drive away.

The remaining are informed by the police that they will be detained if they do not leave now. The solidarity protest is over.

Linus doesn’t know any of this, and that, as he will discover, the people outside are there because of him.

Still, the day seems like a regular dispute with the police.

As if this is a regular dispute with the authorities. As if the cops are no longer impartial. As if the police are now a political force.