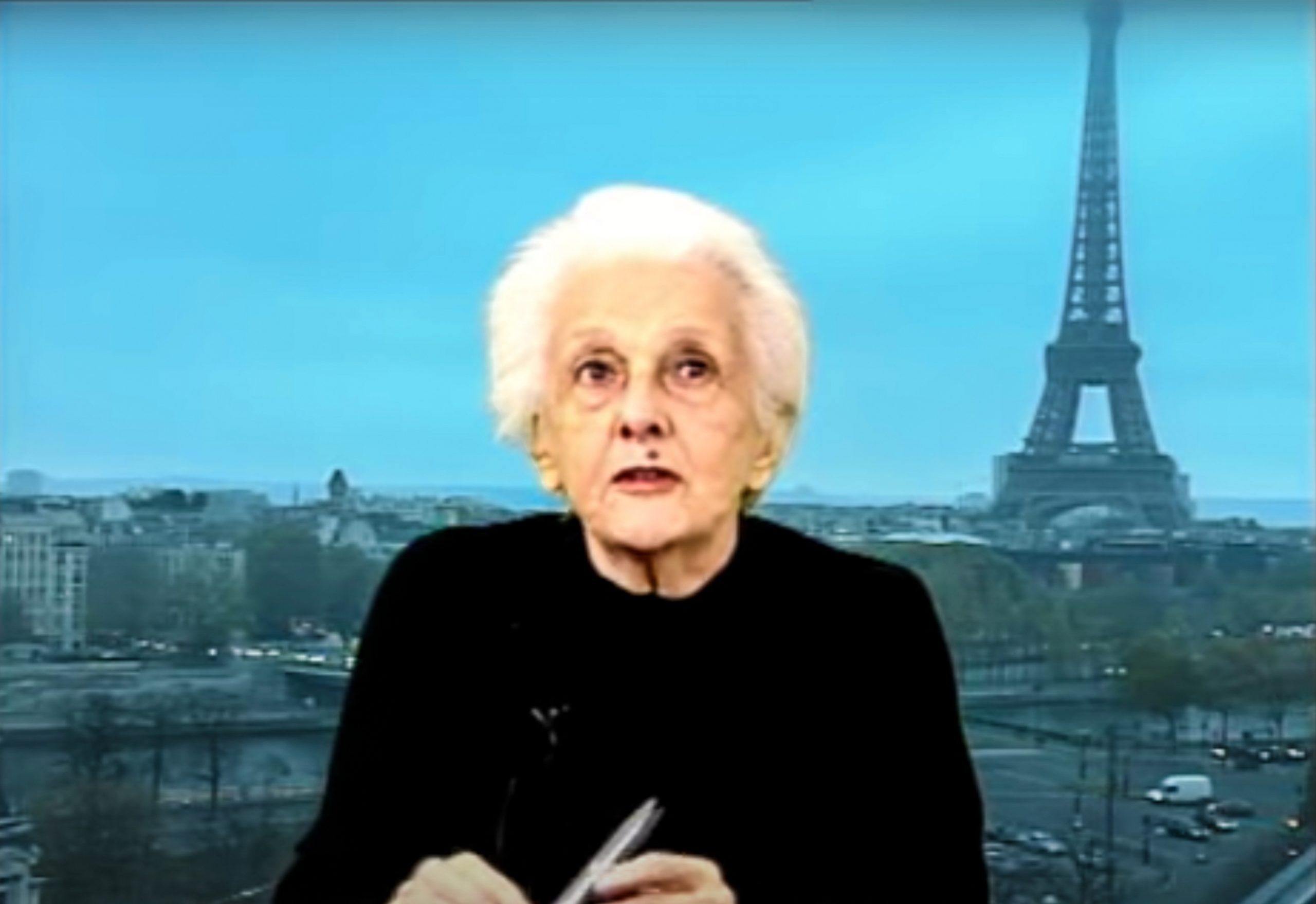 Rossana Rossanda, the self-described “girl from the past century”, who died on Sunday at the age of 96, was many things. First and foremost, she was a Communist intellectual and a Communist militant.

It is sad to have to reiterate the obvious. But since Rossanda’s passing, we’ve been subject to a flood of badly written, fake laudatory articles, often written by people who disliked her when she was alive, where the word “Communist” is either whispered in embarrassment or preceded by “ex” or “former”.

Nothing could be further from the truth. Rossana Rossanda’s Marxist views had been tempered by many storms and defeats. But she continued to support them and live by them to very the end of her long life.

For Rossana Rossanda, Communism is not just an ideological process to create a more just society. It’s a moral compass to discern the truth in a world where telling lies (even “Communist” lies) is the norm. She always told the truth and often paid the price for it. But Rossanda was vindicated by the facts.

Born in 1924 in Pula, then Italian Istria, and now Croatia, Rossanda came from a family of Venetian descent.  Her beloved uncle, Admiral Luigi Mascherpa, was shot by a Fascist firing squad in 1944 because of his role in resisting the Nazis in Leros, after Italy’s armistice with the Allies.

Rossanda worked in the Italian Resistance after 1943 as a messenger, barely twenty years old. She became a member of the Italian Communist Party (PCI) in 1947. By the end of the decade, Rossanda was already recognised as an intellectual powerhouse.

She first found work as an editor for the Hoepli publishing company in Milan and was later put in charge of the culture department in the PCI. Elected to the Chamber of Deputies in 1963, Rossanda networked with some of the greatest names in post-war European culture, from Jean-Paul Sartre to Bertolt Brecht.

The Communist MP found herself at the centre of leftist efforts to “hegemonise” Italy’s cultural landscape, which was successful, at least until the 1980s. At the same time, she began a shift to the radical left-wing of the PCI, questioning the party’s adherence to Stalinist dogma and its ties with Warsaw Pact countries.

This put Rossanda in the awkward position of being both a close collaborator and a potential critic of Palmiro Togliatti, the party’s powerful general secretary, who had been instrumental in both keeping PCI ties with the Soviet Union while maintaining its political and intellectual independence.

When Togliatti died suddenly in 1964, together with Luigi Pintor, Lucio Magri, Valentino Parlato and Luciana Castellina, Rossana Rossanda began to build a movement inside the party, which wanted to be receptive of what the New Left was building outside.

The name of this current was “Manifesto”, from Marx and Engels’ Manifesto of the Communist Party, later the name of the newspaper Il Manifesto, which Rossanda and Magri founded in 1969. Its aim was to question the direction of a party that, in Rossanda’s eyes, was an increasingly rigid and bureaucratic monolith.

Tensions turned into open conflict during the 1968 party congress, when Manifesto members condemned the Soviet invasion of Czechoslovakia. Representatives of Eastern Bloc countries stormed out during a speech by Rossanda.

The next year, at the PCI congress in Bologna, the entire Manifesto group was expelled from the party, despite a heated debate inside the central committee.

The expulsion was supposed to silence the Manifesto’s positions, but it had the exact opposite effect. By 1969 Italy was being overrun by the Hot Autumn, a season of violent workers demonstrations, and the Years of Lead were soon to begin.

The Manifesto (both the movement and the newspaper) found itself in the role of being a link between the galaxy of small New Left groups which were radicalising faster than the Manifesto ever did, and a PCI which, under Enrico Berlinguer’s leadership, was negotiating with the Christian Democrats to join the government, the so-called “historical compromise” later destroyed by the kidnapping and murder of Aldo Moro.

In this position, Il Manifesto became a sort of “voice of reason”, weirdly perceived by both PCI and the extra-parliamentary left as sinners. Maybe this was the origin of its famous motto “always on the wrong side”. Rossanda was the intellectual centre of this shift.

The Manifesto decided to participate in the 1972 elections, getting 0.67% of the votes (“more like a phone number prefix”, was a PCI’s executive sarcastic comment), convincing the group that a party to the left of the PCI belonged in parliament. Something to the left, to be precise, not in opposition.

The party was always a mosquito-equivalent, trying to sting the would-be elephant, the PCI, out of complacency. Berlinguer’s commitment to joining the government was perceived by Rossanda as an unnecessary concession to anti-Communist forces, motivated by a non-existent risk of Italy becoming the next Chile. However, the “elephant” was not to be roused.

This was one of her rare mistakes, as Berlnguer’s goal was to transform Italy into a social democratic state. Moro’s murder destroyed that dream.

In 1978,  Rossana Rossanda wrote what became her most famous piece of journalism. In Il Manifesto, she described the rhetoric of Red Brigades’ “strategic communiques” as something straight out of PCI’s old political language, and the Red Brigades’ cultural vibe coming from the Communist Party “family album”.

This article was highly controversial, provoking outrage not only in the PCI (which supported the hardliners during the Moro affair) but also among the radical groups left of the Manifesto, who thought Rossanda was being too critical of the Red Brigades.

Rossana Rossanda was right. The Red Brigades’ language was a parody of the Stalinist dictionary used by the PCI in the pre-1956 era. But Rossanda (who interviewed Aldo Moro killer Mario Moretti and gave him too much credit as a “real” Communist terrorist instead of an agent of the neo-fascist “strategy of tension”) thought the language genuine. Today, like everything Red Brigades, there’s reasonable doubt.

The high point of the Years of Lead, 1981, saw the Italian left steamroller reach its widest popularity. After that, the long retreat began. The 1980s, a horrid decade by most accounts, saw Rossanda (who had now moved to Paris to follow her partner KS Karol) trying to make sense of a world around her that was going exactly in the opposite direction she had hoped for ten years before.

Rossana Rossanda fared better than others on that. She foresaw the Soviet Union’s collapse with curious precision but was also devastated by the fact that a “successor” to the PCI was nowhere to be seen. She bitterly criticised Achille Occhetto’s efforts to demolish the party from the inside, writing that he was deluded. And she was right, again.

At the same time, Rossanda did not support Rifondazione Comunista and its leader Fausto Bertinotti, writing that the party was simply rehashing a failed formula.

Curiously, it was between 1991 and 1994, that Il Manifesto, now “simply” a daily political newspaper, had its finest hour, breaking away from the retro-revolutionary language that Rossanda often denounced, initiating a series of brilliant campaigns (among non-stop financial woes) marked by memorable slogans, like “La Rivoluzione Non Russa” (“Revolution Don’t Snore), a pun on “Rivoluzione Russa” (Russian Revolution).

In the end, the newspaper did survive, and it is still here today, even though Rossanda distanced herself from it in response to its pro-EU editorial stance. She felt it to be naïve and too lenient toward capitalism.

In the post-Soviet and later post 9/11 world, Rossanda remained active, notwithstanding her age and health problems and the death of Karol. She tried to make sense of an increasing sense of defeat, compounded by the suicide (in a Swiss clinic) of her old friend and comrade Lucio Magri, a man with movie-star good looks who had been probably her closest political collaborator.

Rosanna Rossanda was obviously nostalgic about the era “when we were thinking big” (to echo one of her book titles), but she didn’t retreat into oblivion or obliviousness. Rossanda sensed that, despite the major defeats the secular left has suffered during the previous 40 years, capitalism was not as triumphant as everyone thought. Its contradictions would inevitably, sooner than later, provoke its collapse.

In this sense, her reading of the post-2008 financial crisis period didn’t smack of “I told you so” as much as it could have been. It was more like “I hate it when I’m always right.”  Rossanda continued to be the tough, unbreakable customer she always was, proud of her good manners and impeccable culture. She didn’t fear being unpopular.

While a staunch supporter of reproductive rights (she was at the heart of the campaign to legalize abortion in Italy in 1978),  Rossanda criticised the trivialisation of women’s psychological hardships related to it. She was an old school feminist and environmentalist, but Rossanda repeated, often without being heard, that civil rights and environmental battles, without class struggle, were little more than fig leaves.

Rosanna Rossanda never wavered in her Communist outlook. She successfully refuted the idea that the 20th Century was “the short century” and a failed era. “The twentieth century has been great, I’m very fond of it,” she said. “It’s been the first century where common people have made themselves heard.”