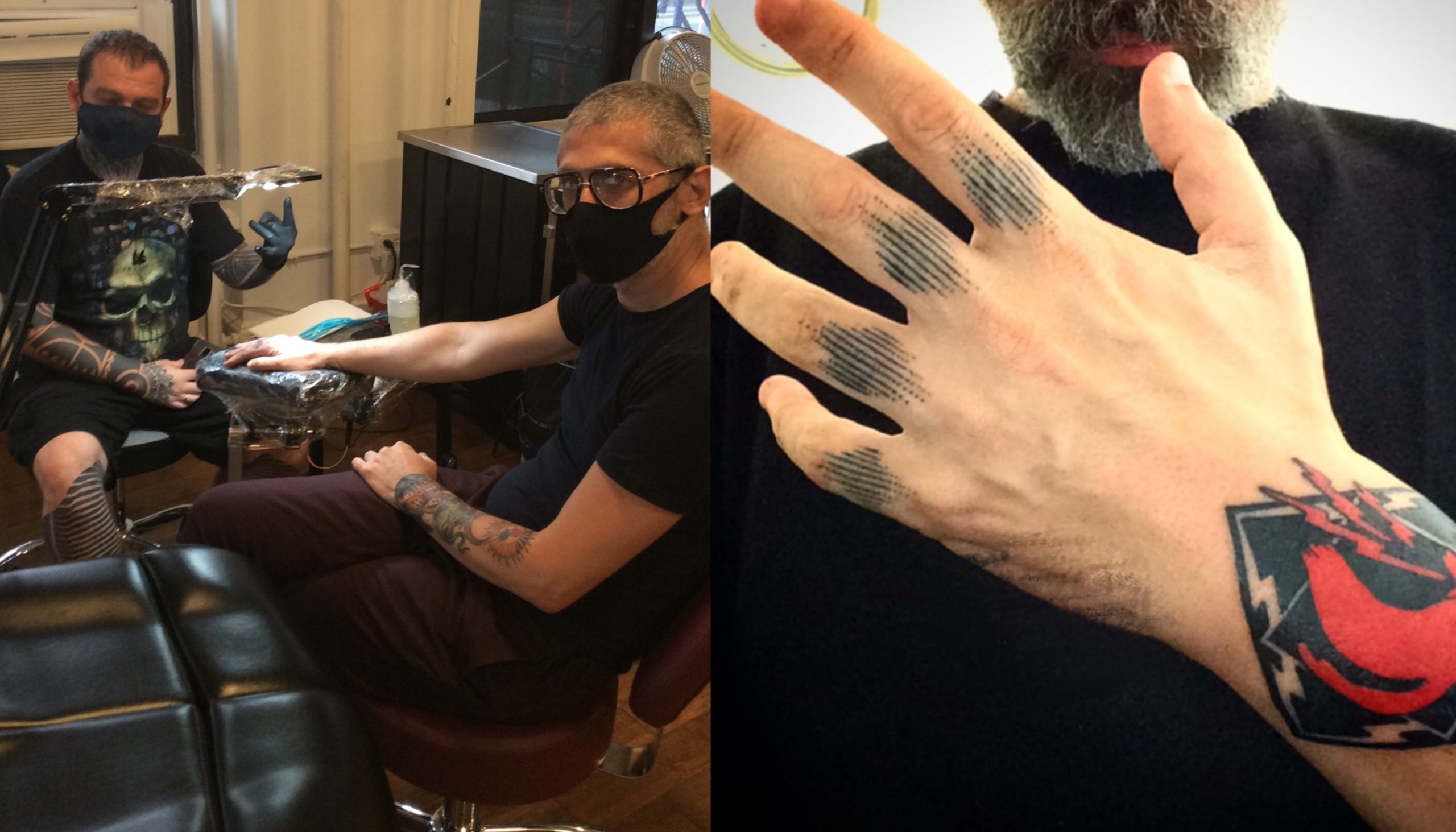 Details are important. The author (R) and his makeover.

The Sound of Lockdown

Long gone are the days of walk-ins from sailors on shore leave or drunken bridesmaids. Now it is all about booking months in advance, getting tested for COVID-19 and being respectful of everyone’s safe space.  A tattoo has become one mistake too expensive, and, potentially dangerous, to get without proper consideration.

Since they became legalised in 1997, tattoo shops in the United States have been thriving.

Once the reality of the pandemic set in, at the Underground Producers Alliance, my coworkers and I discussed who in the arts (other than live musicians and DJs) might be suffering the most. The obvious choice was tattoo artists, we surmised, as being up close and personal is a given when it comes to their gig.

Putting aside some cash, we decided that once they were allowed to reopen, we would throw some business their way. However, someone would need to get tattooed. I gladly took the opportunity.

The truth is that I already have tattoos. I also have a tattoo machine and have given good friends tattoos over the years.

My tattoos have very become very meaningful to me, so I rarely wear tee shirts or clothing that exposes them. I promised myself that I would wait until I was over forty before I would get any more, as that way I would pick the right imagery and not regret it as much.

Misgivings are common after you get a tattoo. It’s like getting married. You have to live with them forever. Yet here I am, several tattoo parlours and five new tattoos later.

My own personal connection to tattooing stems from its sonic character. When you reach a good place on a person’s skin, where the ink is being deposited accurately, the rhythm of the machine adjusts, changing the frequency of the needle and the motor, whether it be a rotary or coil machine.

The sound is familiar, not unlike that of a sewing machine. Its musical qualities are obvious, as long as you separate them from the activity. It could be coming from a cheap synthesiser, potentially in need of some reverb and an EQ. The fact that these sounds are created in process of changing the way our bodies look is its own metaphor.

It makes you wonder whether every activity is musical. Or, at the very least, has its own built-in soundtrack. You just have to know to look out for it. Machines sing and music is everywhere is the idea. Given my line of work, I confess to being more alert to the sounds around me than most.

Still, one can’t discount the synergy between visuals and music. Particularly when it comes to tattoos, which in their current vogue, are descended from the hardcore punk-inspired revival of tattooing in the 1980s. Often improvised – self-inflicted, or with the help of friends – tattooing became an integral part of DIY culture.

In the case of prison tattoos, a tattoo artist first needs to build a machine from parts accessible behind bars. Typically, a machine built in jail is constructed using a motor taken from either a cassette or CD player. The needle consists of a guitar string. Knowing that made me feel confident I could tattoo myself, which I have done on more than one occasion since the pandemic started.

Having gotten my new tattoos, I’ll be the first to admit that I was wrong about how COVID-19 has impacted local businesses. From what I could see, they’re not in bad shape, at all. Tattooists are likely benefitting from the fact that people living under lockdown have more time to get them now.  Whether they have the disposable income to do so is another story.

There’s no cost to being beautiful, as the saying goes. Particularly when you’re under stress like this

The images in this article are of tattoo designs linked to sound. I’m both the person getting tattooed and the artist making the field recording of the needle getting applied to my skin. The choreography is reminiscent of an art installation.

A big shout out to Kumo at Bed-Stuy Tattooing Co. and Lina at Gnostic Tattoo Shop, two of my favourite go-to artists in Brooklyn, for their professionalism and their prices. If you live in the New York area, check them out. Their ink is worth it.