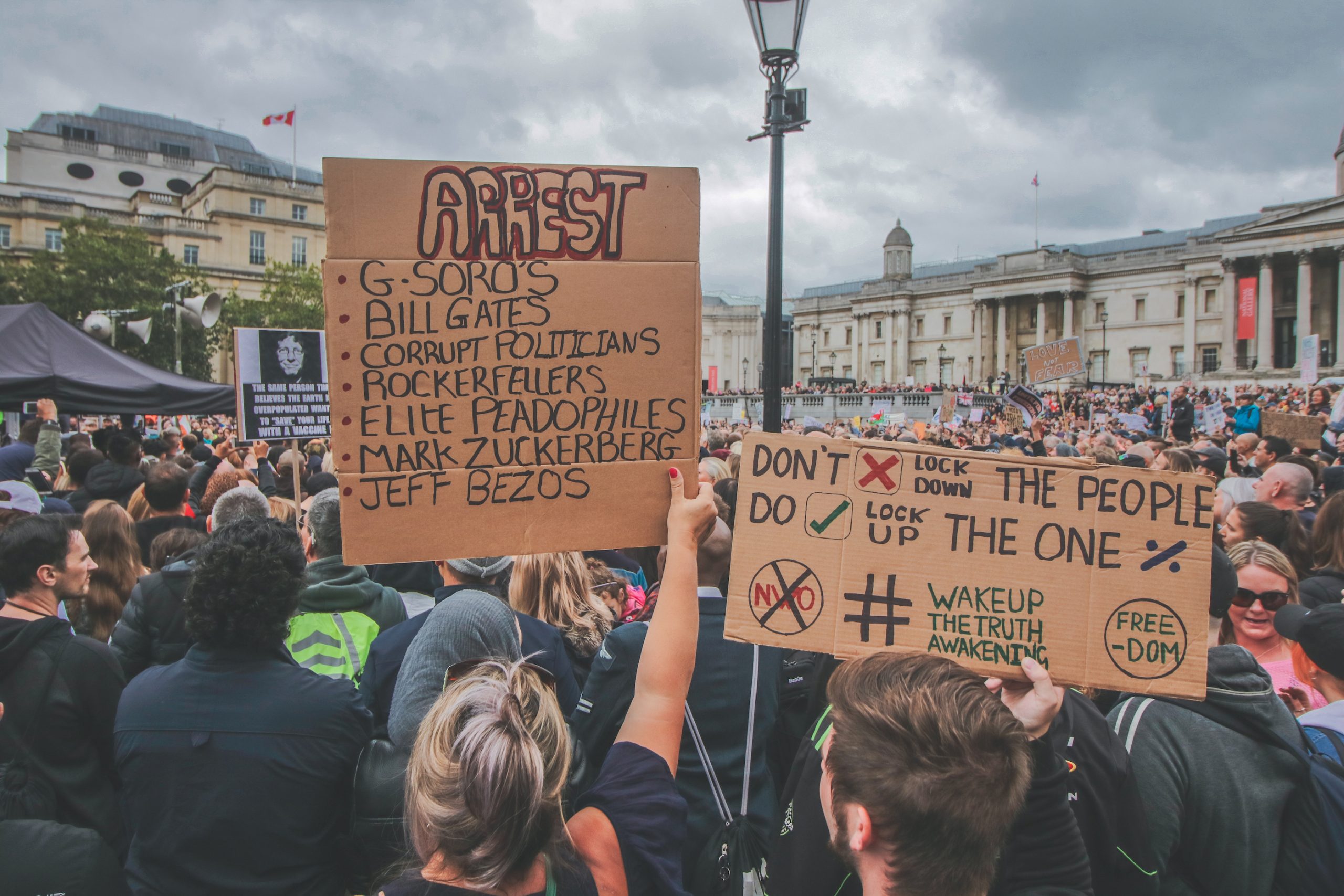 Anti-lockdown marches in London have brought together very confused people into direct contact with anti-vaxxers and far-right activists.

The confluence of government mismanagement, mass confusion and fear has helped turn swathes of people towards QAnon.

The most recent march saw Q activists marching with people protesting against masks and social distancing.

Memorable signs include: ‘Leave Our Innocent Kids Alone!’, ‘I do not consent: and ‘Fuck the New World Order!’

One man at the 29 August march even unfurled an old British Union of Fascists flag, while others held up signs calling for Bill Gates to be arrested (presumably not for anti-trust practices).

Many of the marchers seemed to believe the Microsoft founder, and anti-infectious diseases campaigner, to be behind the pandemic to hawk a quack vaccine.

Times of great upheaval and anxiety are ripe for apocalyptic visions of the future. Terrifying fantasies grip people seeking meaning in a meaningless world.

Some would rather buy into a fake explanation of ‘what went wrong’ than have no explanation. Yet this does not account for what attracts Britons to QAnon.

The real world is scary enough without imagining it’s ruled by child-eating paedophiles.

The rise of QAnon stemmed from an anonymous post on the 4chan messaging board in October 2017. It has since spread all over the world.

Naturally, the United Kingdom has to import everything American. Much like McDonald’s, QAnon has a strong following in Britain.

Unlike the 9/11 truthers, who believed some version of “Bush did 9/11”, the Q crowd have political candidates running for elected office as Republicans.

Never wishing to miss a chance to shock, President Trump has expressed support for their beliefs and shared QAnon-influenced Tweets.

“I don’t know much about the movement other than I understand they like me very much, which I appreciate,” Trump told the press when he was asked about QAnon.

In case you’ve not heard, the QAnon eschatology holds that Trump is fighting a heroic struggle against the deep state.

All of this is what lies behind seemingly innocuous demands to ‘Save Our Children’, with its explicitly Antisemitic nods to Jews sacrificing Christian babies in the Middle Ages.

Yet, many of its followers have mistaken QAnon for a ‘movement against child trafficking’.

When asked about the issue, Trump said: “I haven’t heard that. But is that supposed to be a bad thing or a good thing?”

“If I can help save the world from problems, I’m willing to do it,” the president added. “We are saving the world from a radical left philosophy that is destroying this country.”

The precursors to QAnon include Pizzagate and the Killary theories, which claimed Hillary Clinton is a murderer and involved in child trafficking.

Another important influence is the wave of Satanic ritual abuse claims by American Evangelicals in the early 1990s. Children were often alleged to be its victims.

Such conspiracies were symptomatic of the time in the United States. The Cold War was over and Evangelicals were looking for new scapegoats to replace Communism.

Like all conspiracisms, QAnon is a repository of anxieties about a rapidly changing world. What’s so interesting is how it has exported parochial American concerns to Europe.

It’s no accident that the Q crowd overlaps with the European far-right. Their mix of religious and ethnic identity politics dovetails its predominant ideological streams.

And yet QAnon insists it’s an independent movement, reflecting the populist values of the people, in contrast to those of the elites, such as Germany’s Querdenken 711 (Lateral Thinking) movement.

The reality is quite different. Think of QAnon as an American version of PEGIDA, reconstituting nationalist ideas in new clothing.

QAnon is best compared to a prepper movement, in this case, for the 21st century far-right. It’s just done a better job of marketing its politics.

Britain’s lockdown has proven a great time for paranoia to run wild, especially where such measures have been badly managed.

No wonder the United States and the United Kingdom are hotbeds of conspiracism and Q believers have been able to assimilate fantasies of ‘what went wrong’.

The UK has seen a revival of David Icke, who spoke at the August anti-lockdown march since he has started claiming 5G is behind Coronavirus.

Icke is the same man who believes The Protocols of the Elders of Zion is a factual document.

“I strongly believe that a small Jewish clique which has contempt for the mass of Jewish people worked with non-Jews to create the First World War, the Russian Revolution, and the Second World War,” Icke wrote in And The Truth Shall Set You Free.

“This Jewish/non-Jewish Elite used the First World War to secure the Balfour Declaration and the principle of the Jewish State of Israel,” he continued.

“They then dominated the Versailles Peace Conference and created the circumstances which made the Second World War inevitable.”

Icke went on to claim that this same elite “financed Hitler to power in 1933 and made the funds available for his rearmament”.

Once a footballer turned Green politician, David Icke was laughed off of TV for claiming he was the second coming of Jesus Christ. He is now just one of many prominent figures decrying the lockdown.

The conspiracist has spent more than 25 years building up a wide following for a terrifying dreamscape, where inter-dimensional reptilian paedophiles are controlling our minds.

This may sound ridiculous. But Icke has been able to fill Wembley Arena with followers eager to hear such ridiculous fantasies.

Although many Q believers would listen to Icke, there is no guru like him at the centre of QAnon. Instead, the Q crowd is self-expanding and it may be the first of a kind: A fully crowd-sourced conspiracy theory.

QAnon is run on ‘Qdrops’ – anonymous posts in the dodgier corners of the Internet. Anyone can write them and anyone can choose to believe them. The fact that the Qdrops have failed to make accurate claims or predictions doesn’t matter.

The world situation is bound to generate a huge number of conspiracists because there is little convincing explanation as to why the world is facing a pandemic.

The role of climate change is obscured, just as the role of market capitalism behind the climate crisis has been buried.

Some people, having no recourse to neutral accounts, turn to the margins to seek out a counter-narrative to the experts who got it so wrong.

The British government’s systematic failure to deal with the COVID-19 crisis has created an ideal opening for such fantasies to take hold.

Many Q believers claim COVID-19 only infects and kills people who are involved in the global cannibal-paedophile conspiracy. They see attempts to contain the virus as an attempt by those ‘pedovores’ to defend themselves.

At the same time, there are many other people who believe far less outlandish conspiracy theories.

Some claim the Coronavirus pandemic was planned to crash the economy in order to bail out companies and enrich a small few. Usually, it’s the pharmaceutical industry working on vaccines.

The fact that so many claims like these are being made right now suggests that there is a tremendous amount of confusion out there. People are panicking and grabbing onto anything that gives the situation a definitive explanation.

But it’s not about ‘the truth’ at all. It’s about very bad people who are eating our children. That’s how lowbrow it gets.

The fact that people in advanced liberal democracies, with a modicum of education, would believe in such conspiracies reflects a broader social failure.

Such archaic fantasies reflect a broader alienation from consumer society and high technology. This world is far more retrograde than technocrats think.

The United Kingdom has become particularly vulnerable to importing conspiracy theories from the United States because of its fetishisation of American culture.

Since we lost the empire, Britain has become a medium-sized power in an American sphere of influence.

The so-called ‘special relationship’ came about once the UK began to lose its hegemony in the world. Rather than face becoming irrelevant, the British political class sought a new future as a ‘junior partner’ to the US.

Since then, the United Kingdom has gradually been subsumed into the American imperium. Thus, we claim their ideas are ours.

Not just because we share a common language and history, however chequered, but because our government has been beholden to the United States for the best part of a century.

Most British are enthralled by American culture. In the UK, the right and the left both try to emulate US political movements. Thus, we have both QAnon and Black Lives Matter.

This is not too surprising since the United States appears far more dynamic and energetic than the UK. But it often produces farcical scenes.

The rally itself turned out a small band of weirdos burning EU flags in Parliament Square.

It does not end there though. Former UKIP leader Nigel Farage has become one of the most prominent of British politicians in US media.

Farage often appears on Fox News and at Trump rallies, even with ‘The Donald’ himself at Trump Tower. It may help his image amongst his followers. But to Farage’s critics, he looks every bit the lackey of empire.

The better side of this is how the British left picks up ideas and tactics from American radicals, particularly Occupy Wall Street and Black Lives Matter.

Extinction Rebellion is similarly indebted to the Earth First! movement of the 1980s, which radicalised American attitudes towards the environment.

Militants in the UK speak a kind of imported progressive American lingua franca (‘people of colour’, ‘empowerment’, ‘allyship’ etc.) This is the best side of the ‘special relationship’.

The British media reports US news as if it’s domestic coverage. Most Brits know American politicians by name but cannot name opposition figures in France.

So it’s not surprising that our continental cousins look on and wonder if the British and the Americans are, in fact, one people.

In the case of QAnon, the conspiracy theory has not stopped at the white cliffs of Dover. It’s gaining traction elsewhere in the Western alliance.

As mentioned earlier, it has also spread to Germany, getting taken up by everyone from Tobias Rathjen, the racist gunman behind February’s Hanau killings, to the fascist Alternative für Deutschland and Reichsbürger activists who stormed the Bundestag on 30 August.

QAnon conspiracy theories are said to be growing amongst France’s Gilets Jaunes, and Italy’s governing Cinque Stelle (M5S), which was an early champion of anti-vaccination politics.

Clearly, QAnon is not an ‘Anglo-Saxon’ disease. Increasingly, it looks like the zeitgeist.