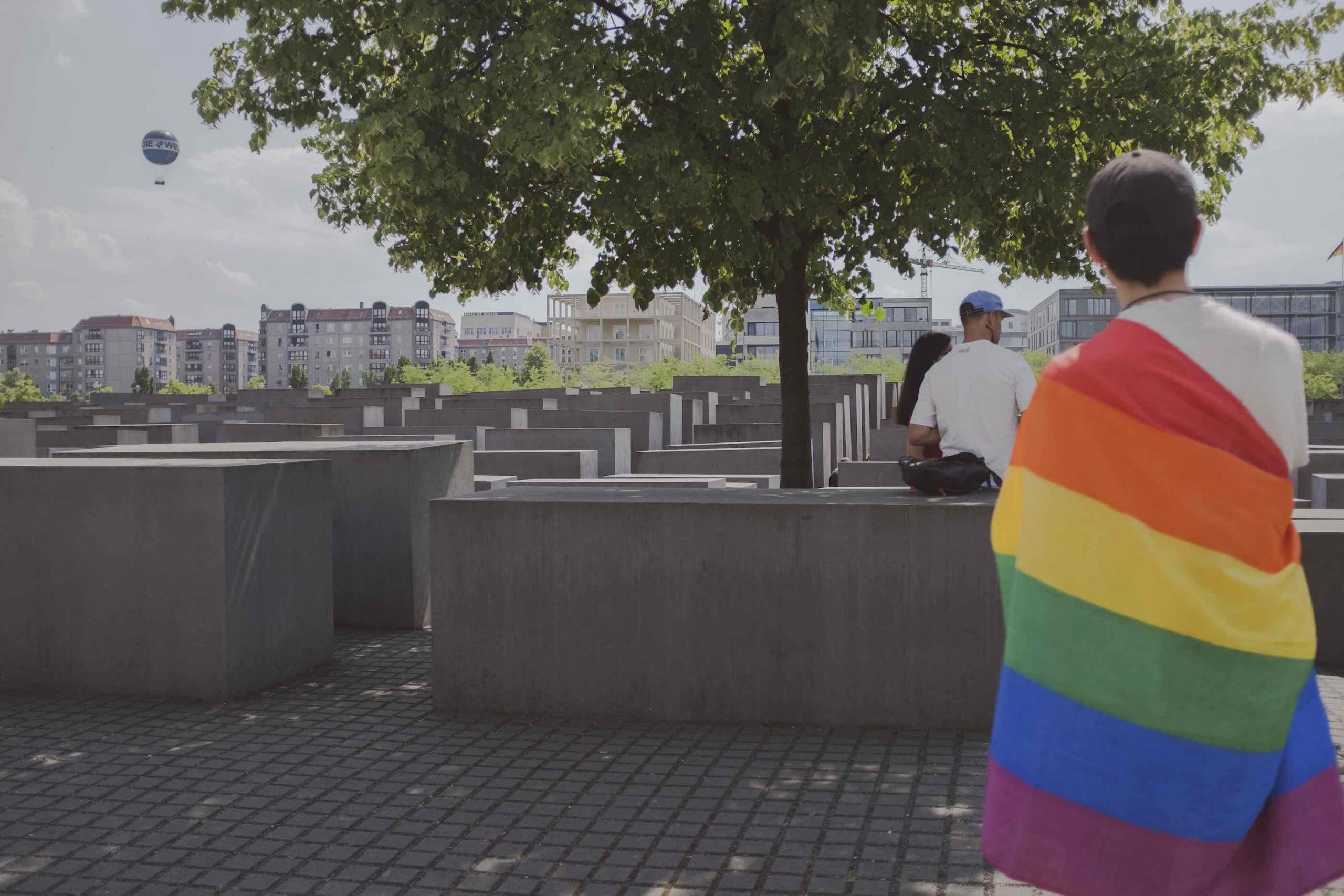 This is why we oppose fascism. Memorial to the Murdered Jews of Europe, Berlin.

Many people are concerned about the rise of neo-Nazis and other violent far-right groups, but think that street brawling is the only way to combat them.

In fact, there are many, legal, community-based actions—the majority of which are available to people of all backgrounds, identities, and skill levels—that can help to contain far-right organising, and prevent or mediate the damage it inflicts.

Below are some of the options outlined in my new guide, 40 Ways to Fight Fascists: Street-Legal Tactics for Community Activists.

Get started by learning about the far-right. Like all political movements, it is composed of individuals and groups who organise around specific issues, spread talking points, form organisations and political networks, fundraise, recruit new members, and try to influence the larger society.

From the outside, the far-right may seem like a single movement without internal divisions, but its members often disagree with each other. Knowing how they differ is important in deciding how to organise against them.

Be sure to look at the propaganda the far-right produces to get a feel for how they talk, look, and think. Because they know their ideas are seen as hateful, they often use symbols, phrases, and slang to express bigoted ideas without saying what they really mean— a tactic known as using “code-words” or “dog-whistles.”

3. Keep An Eye on the Local Far-Right

Once you’ve identified your local far-right groups, you’ll want to keep track of what they’re up to. Document their organisations, projects, social media, websites, print publications, meetings, and events. Be sure to take good notes and screenshot everything, because you never know what will end up being useful later on. Start with publicly available information, like online forums, websites, and social media accounts. Collect information like names, pictures, home addresses, jobs, social media accounts, criminal records, organisational affiliations, and political events they have attended. Monitor their presence at rallies and, when possible, identify those who show up.

The far-right will often put up flyers and stickers at college campuses, residential neighbourhoods, religious congregations, and music venues. Always be on the lookout for and immediately remove this—ideally replacing it with your own messaging. This lets the far-right know the community won’t look the other way, while communicating to targeted groups that allies have their back. Even in areas where the far-right has a lot of support, make sure you keep a presence there; remember that no community is politically monolithic.

Identify the institutions, community groups, and professional organisations that the far-right is targeting for recruitment. Push these groups to speak out against fascism generally, and local groups specifically.

Fascists are skilled at introducing slogans and talking points into political debate. These include myths and false information about “white genocide,” black-on-black crime, and Jewish control of the media. Debating them publicly can make their lies look worthy of consideration. But circulating a list of common fascist talking points along with rebuttals gives community members the tools to win personal arguments. And when the people with bigoted views are in a place of self-questioning, the facts will be ready for them to discover.

10. Expose Fascists at Home and Work

After identifying key far-right activists—especially organisers and members with violent histories—find out where they work and live. Call their boss and pressure them to fire the fascist in their midst. Notify their neighbours with flyers, letters, and door-knocking campaigns. Ask local businesses to refuse to serve them.

Organise public talks, reading groups, and classes. You can discuss what fascism is, what the far right looks like at present, and how to resist it. Many experts are willing to give talks, but consider video calls if it’s too difficult to bring speakers to your town in person.

Almost all communities have histories of fascist, racist, and other bigoted violence. Hold events memorialising the victims and talking about how past events contribute to the present. Examples can include holding processions to the graves of those killed by White Nationalists and memorials at murder sites.

Violence is central to fascism, so if fascists are organizing in your area—there will be emergencies. You will also get last-minute calls when they hold unannounced events, which became the norm after Charlottesville. Prepare emergency response teams with members who can jump into action at a moment’s notice.

Fascists love to threaten people. Real-world support for those targeted might include escorting them or their family in public, running errands for them, and guarding their homes in case of an attack. Digitally, this may include helping someone wipe their online presence, adding security tools to accounts, or investigating who is threatening them.

A safe house can be as simple as someone who is not known to the far-right and is able to offer a place where folks can stay in an emergency. This person needs to make sure they are available to be contacted at all times.

Many thousands have been injured by the far-right. Reach out to victims and ask how you can be supportive. They may need help with money, legal issues, errands, or just need a shoulder to cry on. If the victim wishes to go to the authorities, and this is consistent with your beliefs, offer to accompany them through the process.

The far-right often tries to enter into existing social groups and either influence them, recruit from inside them, or take them over. In recent years, fascists have recruited from soccer supporters clubs; online gamers; music subcultures such as skinheads, neofolk, black metal, and punk; and religious communities, especially Heathens, Satanists, and Greek and Russian Orthodox Christians.

Fascists will also target progressive groups and have tried to recruit among those involved in Palestine solidarity work, opposition to Middle East wars, criticisms of finance capital and international trade agreements, radical environmentalism, and animal rights. Expose them and push them out.

And in all of these cases, anti-racists in the targeted communities have pushed back; ask them how you can best organize support for their struggle.

40 Ways to Fight Fascists is a free download from Spencer Sunshine/PopMob. Excerpt courtesy of the author. Photographs by Joel Schalit. All rights reserved.