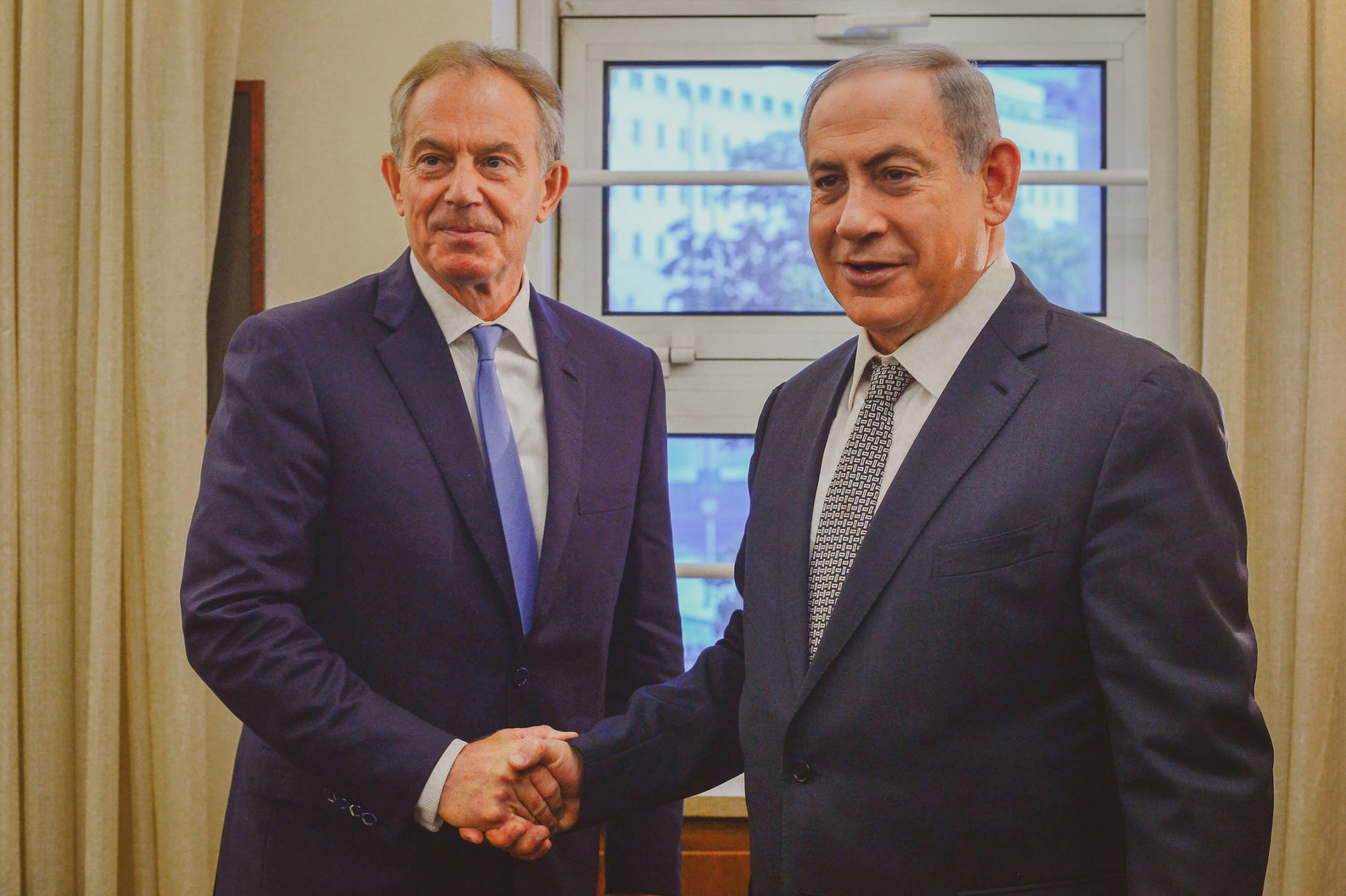 No Room for Palestine

Britain and the Arab-Israeli Conflict

The British have a terrible habit of leaving entire countries in tatters.

The United Kingdom’s record on the Palestinians is one such example, where policy has left a people without a state and few options.

Though the UK is tied to the two-state solution, the real story is quite different. The British legal system often takes a tougher line than the Westminster political class.

The Foreign Office has officially supported the two-state solution since the Six-Day War, in 1967. However, British political enthusiasm has fluctuated.

The United Kingdom has supported alternatives to a Palestinian state in the past but, more recently, it has effectively given up on the peace process.

The reality is that British governments have never had faith in a solution to the conflict.

In one of his better moments, Christopher Hitchens once summarised what he called “the four alternatives in the Israeli-Palestinian quadrilateral”:

The Netanyahu government is dedicated to making the first option a permanent reality.

Meanwhile, the UK government is quietly complicit and the Trump Administration is openly supporting this policy.

The UAE and Israel’s decision to normalise relations is hugely good news. It was my profound hope that annexation did not go ahead in the West Bank and today’s agreement to suspend those plans is a welcome step on the road to a more peaceful Middle East.

It wasn’t always this way. For a time, the British government was flirting with the idea that Jordan could retake the West Bank from Israel and extend its control to the Gaza Strip.

This would have merged the Palestinian territories into a new confederation. It would have been a return to the days when Jordan ruled the West Bank, from 1948 to 1967.

The fact that this proposal fell far short of sovereignty is no accident. British policymakers still viewed Palestinians as an inconvenience, and undeserving of national rights.

Jordan’s King Hussein argued in 1972 that there should be a new state created called ‘the United Arab Kingdom’, which would have encompassed the West Bank and East Jerusalem but not Gaza.

The Foreign Office saw the opportunity in this proposal because it long favoured the conservative Arab monarchies in the region.

It was also convenient because Jordan has always hosted a large Palestinian refugee population. Over half of the country’s population is of Palestinian origin.

Margaret Thatcher was advocating this policy as early as 1982 when the UK imposed an arms embargo on Israel, as a consequence of Israel’s invasion of Lebanon.

Thatcher stuck to this line throughout much of the 1980s, including during her 1986 visit to Israel.

The Tory premier would later criticise the Palestinian Liberation Organisation (PLO) for not compromising enough to make the policy a reality.

The plan was unworkable without the PLO and there was plenty of bad blood between Yasser Arafat and King Hussein.

The memory of Black September had not yet faded when the Palestinian Liberation Organisation tried to topple the Hashemite monarchy to establish a revolutionary government.

The 1970-71 conflict saw both Palestinian and supporting Syrian forces routed by the Jordanian army, eventually resulting in the PLO’s exile to Lebanon.

Much like today, any serious peace plan requires engagement with Hamas. The PLO was opposed to Thatcher’s plan for the same reason the British government favoured it.

But the British could find no Palestinian partner in the endeavour. The Palestinians were the only ones to see no sense in it, either.

Israel would never agree to divide Jerusalem and cede the West Bank to Jordan. The Palestinians would not agree to exchange statehood for Jordanian rule, either.

King Hussein eventually conceded Jordan’s claim to the Palestinian territories in 1988, recognising the PLO as the sole legitimate authority in the West Bank.

The first Intifada was already underway, and the idea of trying to take over the would-be revolution in the Occupied Territories was more trouble than it was worth.

By then the United Kingdom had ceased to play a meaningful role in the Israeli-Palestinian conflict, anyway.

The US would remain in the lead role, as it had since the 1978 Camp David Accords. That meant favouring Washington’s preference for a two-state solution.

A Symptom of Decline

The British record on Palestine is inseparable from its imperial history.

Not least because the UK carved out Palestine after the collapse of the Ottoman Empire in 1917, but also because of its imperial decline.

In November 1947, when the UN General Assembly voted to partition the British Mandate in Palestine, the British Empire was dying on its feet.

Perhaps the British government thought it could not hold onto Palestine after twenty years of violence.

It may have seemed like a better strategy to agree to the United Nations plan to create independent Jewish and Arab states and withdraw to recuperate.

Nevertheless, the UK was culpable in the dispossession of Palestinians in 1948 and shares responsibility for their continuing statelessness.

During the Nakba (Tragedy), more than 750,000 Palestinians were expelled from their ancestral lands in what can only be described as ethnic cleansing.

It didn’t have to turn out that way. The UK might have hung onto Palestine had its position in the country been stronger, irrespective of the conflicting promises of independence it made to both Jews and Arabs.

But, in the years that followed the 1948 war, which demarcated Israel’s first national boundaries, Britain and the Jewish state found common ground that the Palestinians did not.

Unsurprisingly, it was a shared antipathy towards the Palestinians.

Not only were they an obstacle to Israeli expansionism.  The Foreign Office feared the regional instability the Palestinian refugee crisis could unleash, and how it would get exploited by the Russians and their client regimes in the region.

Hence, the fate of the Palestinians in the decades that followed as stateless persons.

As long as someone else was in charge of them – Israel or Jordan, or both – that was far preferable to a Palestinian national entity emerging hostile to the West.

For the United Kingdom, the Palestinians have always been an unwanted reminder of Britain’s imperial decline.

Although British decline had been a reality for decades, the UK government did not realise it was no longer a superpower until it botched its invasion of Egypt during the 1956 Suez crisis.

Britain had waged this war with France and Israel as a last-ditch attempt to strike against Arab nationalism. It failed due to US opposition, ironically.

This would prove to be the historic breaking point for the United Kingdom.

Britain would retreat from such direct adventurism. Instead, the government would revert to backing status quo forces in the region and favour Arab oil monarchies above all others.

The Palestinians would always stand outside that, as they lacked the state and the resources to attract their former colonial overlords.

Today, the problem is quite different for British policymakers.

The UK is very much on Israel’s side. The Arab façade is still in place, but the tension between Western patronage and opposition to Israel is starting to give way.

The UAE has opened diplomatic ties with Israel. There has been talk of Saudi Arabia taking this path for years.

This shift would suit the British government’s long search for a coherent strategy in the region.

The Middle East may be on the brink of a new political realignment, and the UK could be on the winning side.

But for now, the losers will remain the Palestinians. You can thank the Americans for that.

The Trump Administration’s enmity towards them has only reinforced Britain’s reluctance to take Palestine seriously.

Photograph courtesy of the Prime Minister of Israel. Published under a Creative Commons license.