Open borders and liberal technocrats. It couldn’t be any more of a caricature than that. Unless you’ve been sleeping under a rock the last decade, that’s the EU to its Fleet Street critics and their MAGA mates in the United States.

So ubiquitous is the snowflake stereotype in English-language news media, even pro-Europeans take it to be true.

Nevermind, of course, that there are many different visions of the European Union. Not all of which are humanitarian or democratic.

Indeed, the ideological divisions which continue to define European politics, are mostly lost to the Anglosphere press.

Little would one know, outside of the EU, what the causes of the European left are, such as austerity and the right to asylum.

At best, news agencies follow the lead of the British press and over-emphasise the significance of Euroscepticism and the growing appeal of the Salvinis of the bloc.

It makes sense, insofar as it reflects that political symmetry on Europe that exists between UK and US media, and their current governments.

But it’s a very narrow view of what Anglo conservatives think. For example, a not insignificant section of the US alt-right, one viewed favourably by Donald Trump, is, in fact, pro-European Union.

“If European nations want to be anything other than pawns in the American empire, they are going to have to unify,” said American white nationalist Richard Spencer in a May 2019 interview.

“You can’t just say that a country like Hungary is a sovereign entity,” he continued. “These countries don’t have nuclear weapons. They might not literally have armies. They certainly don’t have armies of any significance.”

The French-Canadian fascist claimed the EU is “cucked” and an EU army will be “a slave to Israel”.

“You either basically fracture all of Europe into little state-lets that have no power and therefore are going to be someone’s bitch,” said Spencer.

“The only way to get away from that is for there to be a unified, hegemonic Europe,” Spencer argued. “In such a situation, of course, Germans, and French and Italians are going to be the big boys. I don’t understand why people find this to be such a problem.”

This is a minority view on the far-right today. Yet the American alt-right is fascinated with the idea of a white ethnostate and has repeatedly called for its creation, whereas European fascists are still more invested in the nation-state.

This is the contradiction neo-fascists face.

There are many reasons why the radical nationalist right can’t embrace the European Union, and yet Spencer’s view of the EU belongs to an older tradition on the far-right.

His words are in line with a much earlier fascist leader.

Sir Oswald Mosley, who came closest to playing führer in Britain, spent his last years campaigning for a pan-European state.

Mosley called for ‘Europe, A Nation’ in a 1948 pamphlet and founded the Union Movement (UM) to promote it. But this was the result of a longer story.

In the 1930s Sir Mosley was the leader of the British Union of Fascists (BUF), the most significant far-right group in British politics.

The short history of the group saw its numbers reach an estimated 50,000 members. He managed to consolidate most far-right elements into the BUF and no fascist group in the UK has come close since.

After the BUF was banned in 1940, Oswald Mosley was locked up for the duration of WW2. During his time interned, Mosley began to learn German and think about a post-war fascism. He would study the underground far-right press in Germany upon release.

This was where Mosley picked up the idea of European integration.

The German far-right was flirting with the prospects of a European ethno-state. The vision called for impenetrable borders and for European Jews to be deported to Palestine.

This was before anti-Zionism took hold on the far-right as well.

Not coincidentally, Mosley founded the Union Movement to campaign for a fully integrated single European nation-state.

This was just as the UK was accepting the first influx of Afro-Caribbean migrants in the late 1940s.

Of course, the Union Movement wanted to keep Britain ‘white’ – as well as the rest of Europe. The party would take up anti-black racism in the 1950s and 1960s playing on popular fears of immigration.

The UM campaigned for mandatory repatriation of blacks and a new kind of political system with a much more powerful executive and regular referendums to shape policy.

However, the most people the Union Movement could muster was an estimated 1,500 in a march through Camden, in 1948.

Oswald Mosley may have had aspirations for a pan-European fascist state, but the idea lacked popularity even on the British far-right.

Secondly, WWII had discredited fascism and the public was much less open to anything remotely resembling Nazi Germany or Fascist Italy than it was before 1940.

Nevertheless, Sir Mosley would stick to the pro-European strategy. He found like-minded neo-fascists in Belgium, Germany and Italy. He wasn’t totally isolated on the idea, even if he was less and less powerful on the British scene.

Even Mosley’s old allies like AK Chesterton broke with him over it.

Chesterton went on to found the League of Empire Loyalists in 1954. It soon became the dominant force on the far-right. It would later form the basis of a more potent neo-fascist organisation.

Europe Is Not Enough

Despite his loss of power, Oswald Mosley remained a notorious figure and sought to exploit racial tensions whenever he could. He tried to win a seat in Parliament on the back of the 1958 Notting Hill race riots. But it was too late to make a comeback.

Mosley was already a creature of the past. He was a piece of history to a new generation of fascists. The UM would stagger on through the 1960s and stage anti-migrant marches, but the energy was now on the neo-Nazi section of the far-right.

The National Front would rise to become the leading British neo-fascist party in the 1970s.

But the NF did not have the ‘European’ fixation the Union Movement had because it was partly grounded in nostalgia for the British Empire. Furthermore, the Front recruited skinheads and football hooligans, for whom pan-Europeanism was too much of a conceptual stretch.

The National Front was born out of a merger of different far-right groups, including the League of Empire Loyalists and the National Socialist Movement.

The common ground was support for mandatory repatriation of non-whites, support for British national sovereignty and solidarity with white colonial regimes like Rhodesia and South Africa.

Meanwhile, the Conservative establishment would enact Mosley’s wishes. However, this was for purely economic reasons and not out of Mosley’s fantasies about an all-white European superpower purged of ‘Jewish influence’.

(As historian Tony Judt would point out in his 2005’s Post-War, European Union-era Europe had become that, which was what populists like the Le Pens were fighting for. In Judt’s view, their racist politics was an attempt to maintain Hitler’s post-war ethnic order.)

Earlier, Prime Minister Harold MacMillan had wanted to take Britain into the European Economic Community but was blocked by French President Charles de Gaulle. It wouldn’t be until 1973 that the Heath government took the UK into the European Common Market.

Oswald Mosley’s party no longer had any relevance.

The Tories had adopted European integration as its policy; whereas, the National Front used opposition to the Common Market to strengthen its hold over the far-right.

Faced with defeat, Sir Mosley retreated to Paris, where he lived out the rest of his days.

The Union Movement morphed into a publishing house called the Action Society that staggered on until 1994 before finally collapsing.

Today, European Action is the only British far-right organisation that claims to follow the Mosleyite line.

As the name implies, European Action favours a pan-European state but it tries to distance itself from the history of the BUF.

He describes the group as ‘post-fascist’ but prefers to call its ideology ‘European Socialism’ (a combination of words not too far away from National Socialism).

Some of the European parties that supported Oswald Mosley’s vision had much more success: the Italian Social Movement (MSI) would become the National Alliance.

The Italian post-fascists later marched into the mainstream. MSI leader Gianfranco Fini would go on to become deputy premier under Silvio Berlusconi and later president of Italy’s lower house of parliament, the Chamber of Deputies.

Others like the Deutsche Reichspartei (German Reich Party) evolved into the National Democratic Party of Germany. In doing so, the DRP traded in European nationalism for pan-Germanism. The two were never that far apart in the minds of German neo-Nazis.

Unlike these parties, European Action has made more concessions.

The Mosleyites no longer favour mandatory repatriation of migrants, but they still support strict border controls and deporting illegal immigrants en masse. The party argues against multiculturalism and integration. It’s hard to say what exactly it has in mind.

However, some old habits die hard. European Action is still fixated on Jewishness and how to characterise it.

The party’s website eschews scientific racism in favour of more esoteric claims about race – specifically that being Jewish is a mindset.

At the same time, its website reproduces a lot of bog-standard anti-Semitic material and promotes everything from the Rothschild conspiracy theory to Holocaust denial. 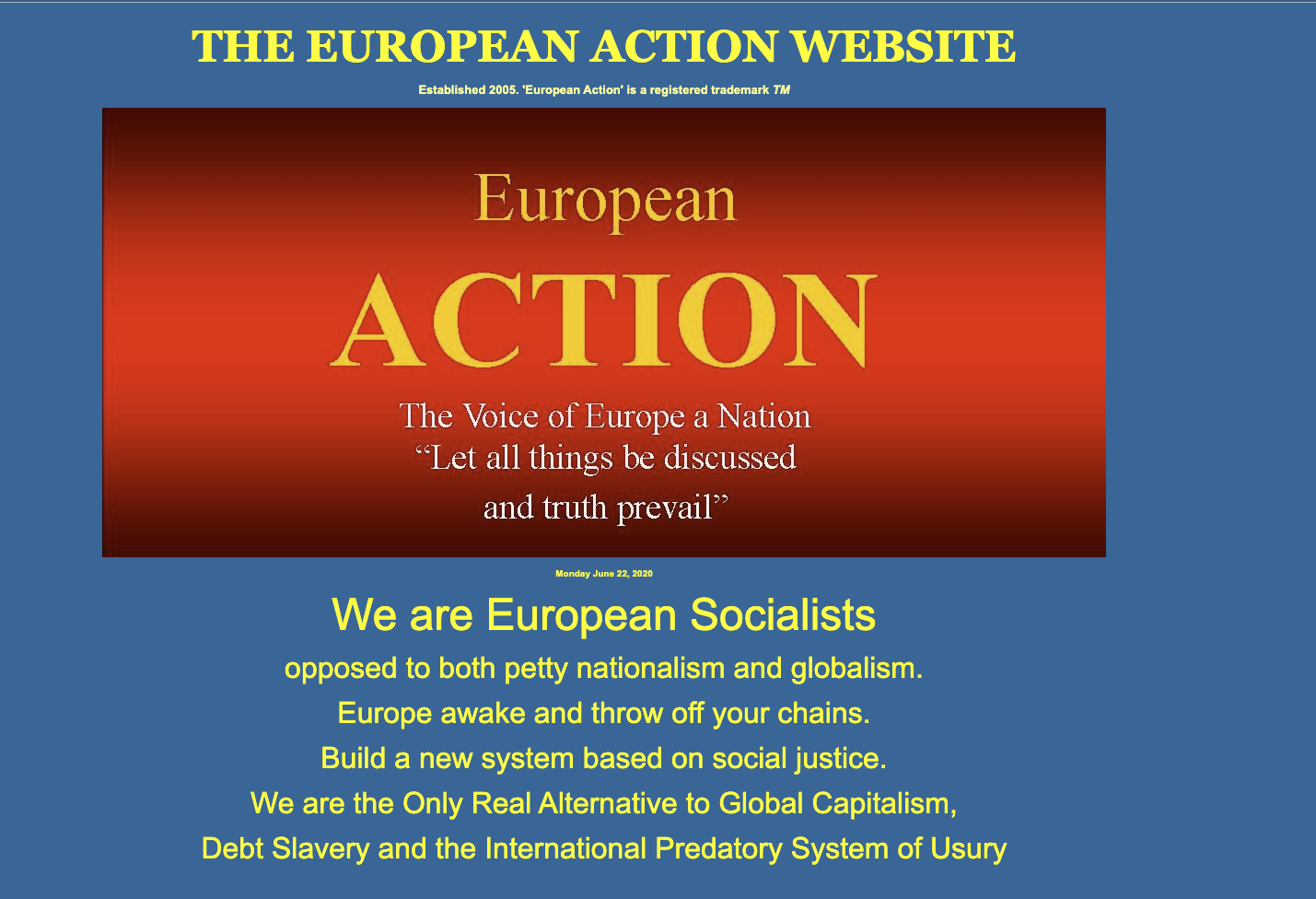 This isn’t all that surprising, though it trumps all other racism for the party.

European Action seems to be very pro-Arab and even pro-Muslim up to a point. No doubt this is a part of its anti-Zionism, but also preference for a different approach to the Middle East.

The far-right has always been good to twist itself into strange contortions over its obsession with Jews.

Since the 1930s, the British right has been home to an ultra-nationalist anti-Jewish political formation of some kind.

We’ve seen the National Front and the British National Party come and go. The only question now is what will come next.

Don’t be surprised if, given the economic ruin of post-Brexit Britain, nostalgia for the Europe that might have been returns in this form.

It doesn’t take much to see who the idea will get cribbed from.

Screenshots courtesy of the BBC and European Action. All rights reserved.