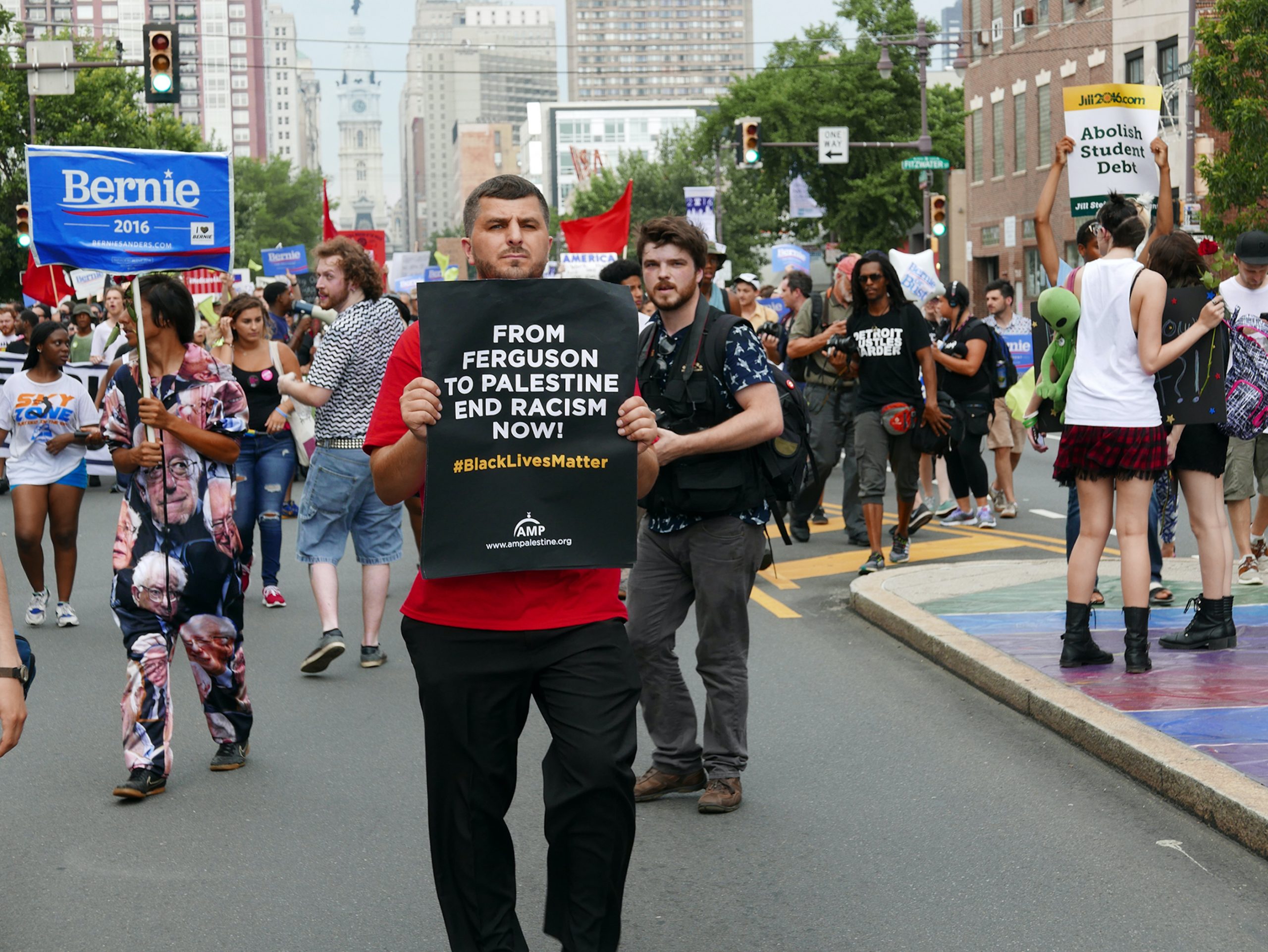 In the wake of the police murders of Breonna Taylor and George Floyd, Black Lives Matter (BLM) has become a ubiquitous slogan and a powerful network of African American-led organisations fighting for racial justice in the United States.

BLM has existed as an organisation since 2013 when three radical black women wanted to speak out against the acquittal of Trayvon Martin’s murderer using the hashtag #blacklivesmatter.

It now exists simultaneously as an idea and a protest movement aimed at defunding police departments, ending police violence, and calling for drastic changes in society that range from the abolition of prisons to dismantling capitalism itself.

Under the banner of Black Lives Matter, we are seeing the birth of what might be the largest political movement in American history, as well as the centring of African American knowledge and experiences at the heart of its political program.

As the owners and caretakers of the institutions that need to be dismantled, the right-wing in the US does not like being reminded of its connections to centuries of racism, colonial policies, colonial mentalities, or the fact that human suffering is the end result of American capitalism functioning exactly as it was designed to do.

Unsurprisingly, it has interpreted the protests, the protestors’ demands, and widespread public support for Black Lives Matter as a nothing short of apocalyptic. Conservative pundits, Fox News anchors, and the president himself have spent over a month mercilessly disparaging BLM and every other political folk devil (i.e. Antifa) they can conflate with the ‘chaos’.

There’s recently been a strange new twist to the outrage that is particularly concerning to me as a Jewish supporter of Black Lives Matter.

This past week, Georgia’s Republican Senator, Kelly Loeffler, penned an article in the conservative Daily Caller (the other Breitbart) in which she railed against Black Lives Matter as a “Marxist group” that “proudly advocates for the defunding of police, calls for the removal of Jesus from churches, supports the disruption of the nuclear family structure, harbours anti-Semitic views and actively promotes violence and destruction across the country”.

It would be a somewhat comical take on a diverse, decentralised movement that lacks a singular ideology, were it not for another influential public figure recently making the same fallacious claim about BLM’s supposed anti-Semitism.

Klein has long garnered notoriety for his casual Islamophobia, racist quips, and virulent support for Israel’s right-wing government, but his comments were nonetheless shocking and rightly condemned by a number of Jewish organisations in the US.

It is important to take these allegations of Antisemitism seriously not because the charges are valid or made in good faith, but because they will likely proliferate, just as they did four years ago when the Movement for Black Lives – an umbrella group of African American organisations – released a comprehensive platform statement that strongly condemned Israel’s treatment of the Palestinians.

The statement was denounced by conservative Jewish groups and also criticised by a coalition of Jewish organisations because it called out the United States for being “complicit in the genocide taking place against the Palestinian people” and described Israel as “an apartheid state”.

It was during those 2014 protests that the founders of Black Lives Matter transformed their hashtag into an on-the-ground presence. Protestors were met by police forces donning military-style gear and vehicles that made the entire scene reminiscent of a battlefield in war, especially after protestors were teargassed.

The murder of Brown and the dramatic images from the protests solicited support from people around the world on Twitter, including many Palestinians, who offered both messages of solidarity as well as practical advice for dealing with teargas.

Just weeks prior, the Israeli military had launched Operation Protective Edge in Gaza – which ultimately killed over 2,100 Palestinians and left more than 10,600 injured – and the parallels between the two events were widely discussed by people in both countries.

The following year, African American activists from the US travelled to the Palestinian territories and also collaborated with Palestinians on a star-studded video about Gaza and Ferguson called When I See Them I See Us.

As both Angela Davis and Robin DG Kelley discussed in the aftermath of those 2014 events, black activist support for Palestinian liberation is by no means a recent phenomenon, though the conjuncture of Gaza-Ferguson brought that relationship into an entirely new context for a different generation of activists.

However, like so many of the American activists and scholars who do work around the Israeli-Palestinian conflict, those who crafted the Invest-Divest statement, as well as Black Lives Matter more broadly, were subject to dubious accusations of Antisemitism despite making no references to Jews or Judaism.

One can only assume this is the basis on which Senator Loeffler and Mort Klein made their recent statements, given that there was no accompanying context, evidence or narrative to suggest otherwise.

In these critiques of BLM, two lines of right-wing attack have now converged in dangerous ways as new narratives begin to emerge that frame African American protestors as a threat to white people and a threat to Jews.

While the first proposition may be a signature of the Trump presidency, it is also a central tenet of American racism that predates the country’s founding.  However, the latter position plays off of right-wing anxieties about BLM’s support for Palestine, as well as Jewish anxieties over anti-Semitic views embraced in parts of the black nationalist movement, most notably within the Nation of Islam and the New Black Panthers Party.

Ironically Black Lives Matter lay the groundwork for the only path forward targetting white supremacy – the ideological knot of racism and Antisemitism that threatens the lives of both blacks and Jews in the United States (of whom not all are white).

BLM provides an incisive point of entry to unpack both the history and nuances of white supremacy in a way that is crucial for Jews to support if their goal is to effectively combat white supremacist ideologies and their violence.

As it stands, discourse about Antisemitism in the US has been wrongly framed by conservatives as a leftist phenomenon tethered to criticisms of Israel, rather than seeing it for what it truly is: a white supremacist ideology that forms the basis for right-wing politics, though it is not unique to it.

The relentless onslaught of grifters equating Antisemitism with every criticism of Israel – from the most tepid human rights observations to more stridently anti-Zionist positions – has made it incredibly difficult for Jews to address the real dangers of Antisemitism in the US, from explicit hatred of Jews to conspiracy theories about George Soros.

Indeed, the vast majority of domestic terrorism carried out in the United States is by white supremacists motivated by an interconnected hatred of African Americans, Jews, and immigrants. Black activists and Jewish leftists are model citizens in comparison.

It wasn’t supposed to be this way. But, 75 years after the Holocaust, Antisemitism is a very real thing and it has become a bigger problem in my lifetime, in my own country, and in my own city, than I ever thought possible.

My godmother was the former president of Squirrel Hill’s Tree of Life synagogue and it’s where my godfather and both of their children were Bar Mitzvah’d. Their friends were murdered there by a conspiracy-addled white supremacist.

The house of worship is ten minutes from where I live. I think about it every time I see stories about Nazis, neo-Nazis, Proud Boys, Atomwaffen, and all the other fascists who are proliferating nowadays and hide behind nicknames and dog whistles in the light of day.

I hope to live in a society one day where those people aren’t a threat to our communities. But more importantly, I want those racist ideologies, and horrors they’ve bred for centuries, to become as ancient as Greek mythology.

The only movement I’ve seen in my lifetime that shares that vision, and wants to dismantle those structures more than I do, is Black Lives Matter. Its goal of dismantling white supremacy can be and should be, the point of solidarity for Jews and BLM.

Black Lives Matter is a struggle that white Jews, in particular, should join and view as their own. But not from a position of ownership, or authority, or as mere boots-on-the-ground for a cause they see as ultimately benefitting themselves (even though it does).

Rather, we should participate as listeners, as collaborators, and as supporters. We should heed the wisdom of Black Lives Matter activists who rightly tell us that a true ally is doing the hard work of examining and helping to transform our politics and institutions that perpetuate white supremacy – even those in the Jewish community.

Because while it’s easy to point the finger at Nazis and confederate monument defenders, it’s much more difficult and thus necessary to point it at ourselves.