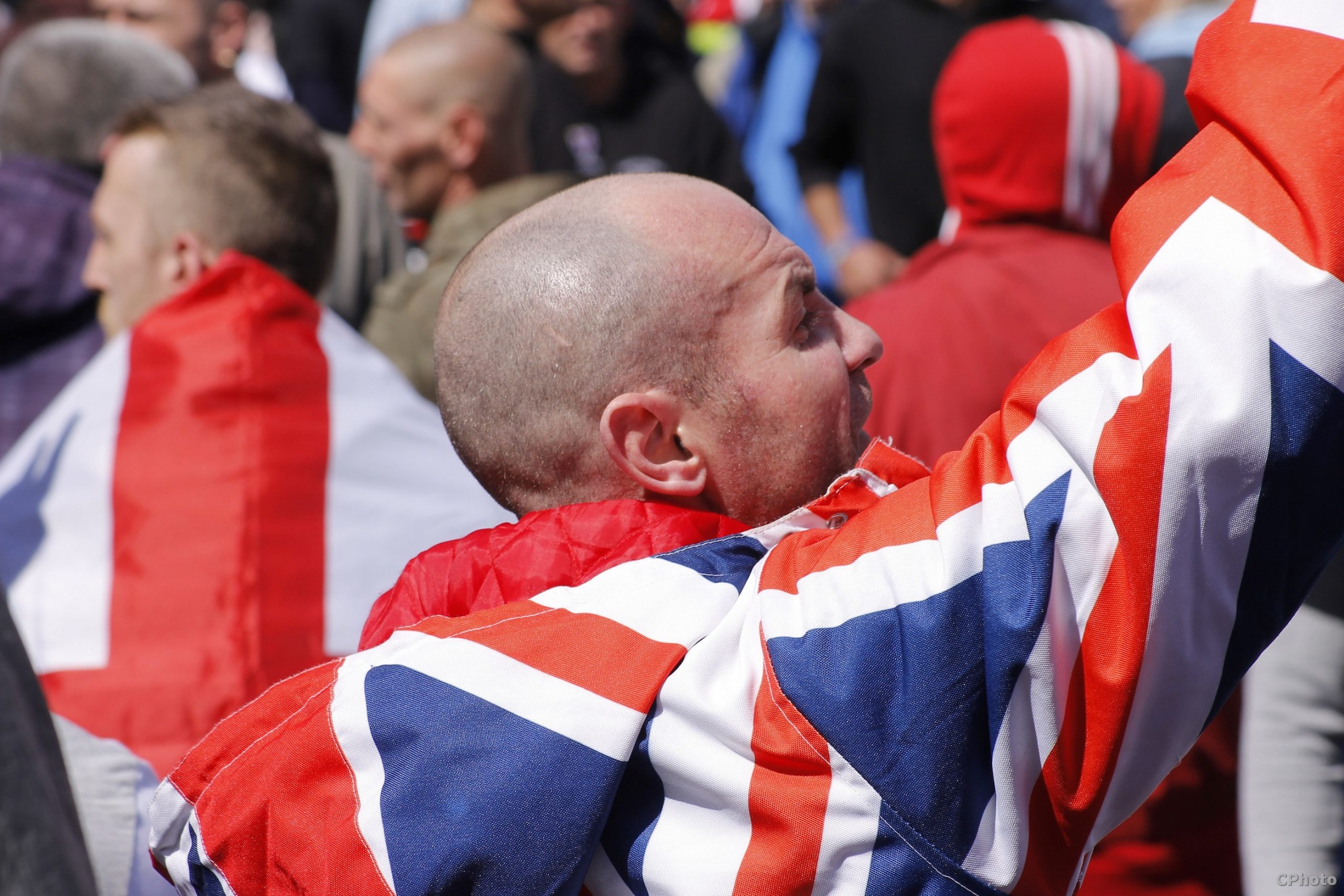 Britain’s National Front and its Echoes

Fringe groups can do serious damage to democracy. We’ve seen just how dangerous they can be with the killing of Jo Cox.

The Labour MP’s murder may very well have shocked Britons into voting yes in the UK’s 2016 Brexit referendum.

Although the killer,  Thomas Mair was a lone wolf terrorist, he was a part of the base of far-right groups such as Britain First and National Action.

It’s open to speculation what their followers might have done if the referendum had been rejected. As Cox’s killing demonstrated, violence pays.

The last decade has seen the British far-right return to street action in a bid to overcome the limits of electoral strategy. This is nothing new.

Once upon a time, the National Front (NF) was the leading neo-fascist organisation in Britain. It grew more and more powerful throughout the 1970s, in the place it knew best: on the street.

The NF thrived off of every wave of immigrants from former colonies like Uganda. Yet the group peaked before it could achieve mainstream success.

The 1979 general election would be a turning point for the United Kingdom. It would mark the final break with the post-war settlement with the rise of Margaret Thatcher.

The National Front hoped 1979 would be its turning point. The front had been building itself up for more than a decade.

NF leader John Tyndall had managed to consolidate the front’s position as the leading racist party in Britain. It looked like this election could be its long-awaited breakthrough.

At the time, the UK looked like it was falling apart. The Labour government faced a crisis over the austerity programme it had imposed on the country after the 1976 IMF bailout.

Many fringe right-wingers viewed Harold Wilson as a Soviet agent sent to destroy the country. This looked like the fulfilment of their prophecy.

The so-called ‘Winter of Discontent’, so often portrayed as the result of left-wing policy, was actually the result of Labour’s right turn from 1976 onwards.

The Callaghan government had embraced monetarism as the solution to stagflation and declared the trade unions and the party’s left-wing its enemy.

John Tyndall and his allies wanted to break the British establishment that had allowed black and brown immigration since the 1940s. Instead, the racists lost in all 300 seats they ran candidates.

Worse still, every single National Front candidate lost their deposit to stand in the election.

“I remember things being very, very hectic and feeling that we could be on the edge of a breakthrough,” Tyndall later said.

The defeat was even worse than the NF’s 1974 defeat because Tyndall had convinced his supporters that the final victory was near.

Yet it turned out the National Front peaked in the mid-1970s and had gone into decline from 1977 onwards. The Front would drift into a strange wilderness period.

It now looks like the British far-right is in a similar period today. But this doesn’t mean it will disappear any time soon.

The Conservative Party had triumphed over the National Front partly by appropriating anti-immigrant rhetoric.

Being a disciple of the profoundly racist Tory politician Enoch Powell (Powell was an advocate of remigration half a century before Génération Identitaire,) Margaret Thatcher talked up the threat of being “swamped” by hordes of immigrants.

Thatcher made stricter immigration controls a part of Tory policy soon after she became party leader in 1975.

In the face of defeat, the National Front turned inward. John Tyndall would leave the front to found a new party in 1980.

Meanwhile, the NF would begin to work with Italian neo-fascist Roberto Fiore and try to find a new strategy to rebuild itself.

Fiore advocated a return to first principles. He recommended that front members read Julius Evola and the leadership remodel the front on the Romanian Iron Guard.

This would be the beginning of a long series of experiments.

Some National Front members thought they needed to build a vanguard. They had concluded the lack of ideological purity was why the movement was failing.

So, a small group of party members began to fashion themselves as ‘political soldiers’.

Catholic fascist Derek Holland made the case for this new esoteric approach and stressed religious devotion and an austere lifestyle.

The point was to cultivate a purity of ethos not found anywhere else on the radical right.

The National Front combined this attempt at building a kind of white nationalist Christianity at its core with a new emphasis on community organising.

NF activists tried to embed themselves in communities and appeal to common grievances without proselytising.

However, the search for ideological purity led to some strange tactics for an all-white party.

Some of the soldiers even tried to work with radical Islamists finding common cause against Zionism.

In one bizarre story, Nick Griffin and Derek Holland travelled to Libya in a bid to win support from the Arab nationalist government.

His team returned with hundreds of copies of Muammar Gaddafi’s Mao-inspired Green Book,  the late dictator’s attempt to elucidate his understanding of direct democracy.

Some National Front members did read Gaddafi’s book and tried to apply it to community organising.

In one case, Phil Andrews became a full-time community organiser in Isleworth and left his racist past behind.

At the time, the tactics were controversial on the racist right. So much so that a new faction, bearing the name Flag Group, eventually split off to return to traditional forms of activism.

The Flag Group recruited football hooligans to bolster its thuggish ranks of skinheads. Disillusioned with the state of the NF, it began to look towards France’s Front National and Jean-Marie Le Pen’s pseudo-populist style.

Meanwhile, the Official National Front (ONF), as the Political Soldier faction called itself, was about to implode.

Some of the ‘political soldiers’ decided to build bridges with radical Islamists in the hope of building an alliance against Zionism.

The ONF even distributed The Final Call, the Nation of Islam’s newspaper, and, in some cases, its activists marched with Islamists in protests.

All of this was very disturbing to the rank-and-file skins and street thugs who hated anything remotely foreign.

The last straw was an attempt to ‘make peace’ with the Jewish community.

Patrick Harrington went to The Jewish Chronicle in his long leather coat to tell the paper that the NF had decided it was ‘wrong’ about its attitudes towards Jews.

The ONF leadership was horrified. Harrington had gone off on his own. Nick Griffin was furious and wanted Harrington expelled. By this point, the group was less than 100 members and, in the end, the Official National Front collapsed.

One faction of around a dozen members following Harrington would form the Third Way and distance itself from traditional racist rhetoric.

Harrington and Ulster nationalist David Kerr would seek a new strategy and would later found the Solidarity trade union to organise workers on the basis of nationalism.

In the interim, some 50-60 members followed Nick Griffin and Derek Holland to form the International Third Position (ITP). The new mission was to ‘return to the soil’ of the British Isles in a bid to escape urban multiculturalism and build a rural base.

Once again, the plan did not go as intended. Holland set out to establish a religious commune and ultimately bought a dilapidated property in northern France, where he aimed to build a chapel. The ITP sent begging letters to supporters, while the property stayed dilapidated.

Later, the ITP would even try to take over Los Pedriches, a small village in Spain, to create a safe haven for white nationalists and a training ground for professional revolutionaries.

Roberto Fiore put up the money to buy seven derelict houses. The plan was to renovate them and build a church. Neither came to pass and the media exposed both experiments.

The ITP would give up on political action and withdraw from public life until the group could recover and re-emerge stronger in the future. But this was a surrender after years of failure.

While the National Front was falling apart in the 1980s, John Tyndall was building the British National Party (BNP) into the next big thing for the far-right. The BNP absorbed the fallout from the collapse of the NF and recruited some of its former leading figures.

Tyndall invited Nick Griffin to join the party after it became clear the ITP was a dead-end. He wanted to use Griffin for his intelligence and ability to think big.

Griffin had made a name for himself by producing and distributing pamphlets denying the Holocaust and alleging the media was controlled by Jews.

At first, the Tyndall-Griffin alliance was strong. Griffin stuck to the party line. “The capitalist free traders, the Marxists and organised Jewry have declared war on the white man,” said Griffin at a 1996 BNP rally. “Not just in Britain, but in every nation on this planet!”

Yet Tyndall didn’t anticipate that he would be inviting a new enemy into the party. In just a few years, Nick Griffin would wrestle the BNP from Tyndall’s hands.

Griffin would break with the past and try to rebrand the BNP’s agenda for mandatory repatriation. He tried to couch its agenda in new language to make it more respectable.

Nick Griffin’s tenure (1999-2014) would be defined by a long struggle to mainstream the BNP and finally win an election.

The party would eventually consolidate the anti-immigrant vote and peaked at more than one million votes. Griffin would ride this wave to the European Parliament in 2009.

Once again, it looked like the British far-right was on the cusp of a breakthrough and, once again, it turned out not to be the case. The BNP began to fracture in 2010 and 2011. There was discontent over Griffin’s style of leadership.

The landmark electoral gains were not good enough to satisfy BNP members. Griffin was seen as cashing in on the EU and there was no breakthrough in the UK for the party. So far-right activists began looking for alternatives.

The English Defence League, originally a BNP street organisation, would break with the party and became a serious force with tens of thousands of online supporters.

Then came Britain First, a group that would bring together Christian nationalism and a new social media strategy. The BNP began to look less and less relevant. Much like Tyndall before him, Griffin would eventually be toppled and expelled from the party.

UKIP, and later the Brexit Party, would supersede the BNP and combine its far-right base with disaffected Conservative voters.

Now, as the UK approaches its final break with the EU, the British far-right is still fragmented but its new approach is to return to the streets.

Whether that will reinvigorate its ranks depends on how much Boris Johnson continues to drain its swamp. Like Thatcher before him, his racism coopted far-right politics.

The rise of Black Lives Matters, and reappearance of skinheads and neo-Nazis at anti-racism protests may yet limit Johnson’s reach. For the moment, everything points in that direction.

Photograph courtesy of Paige. Published under a Creative Commons license.