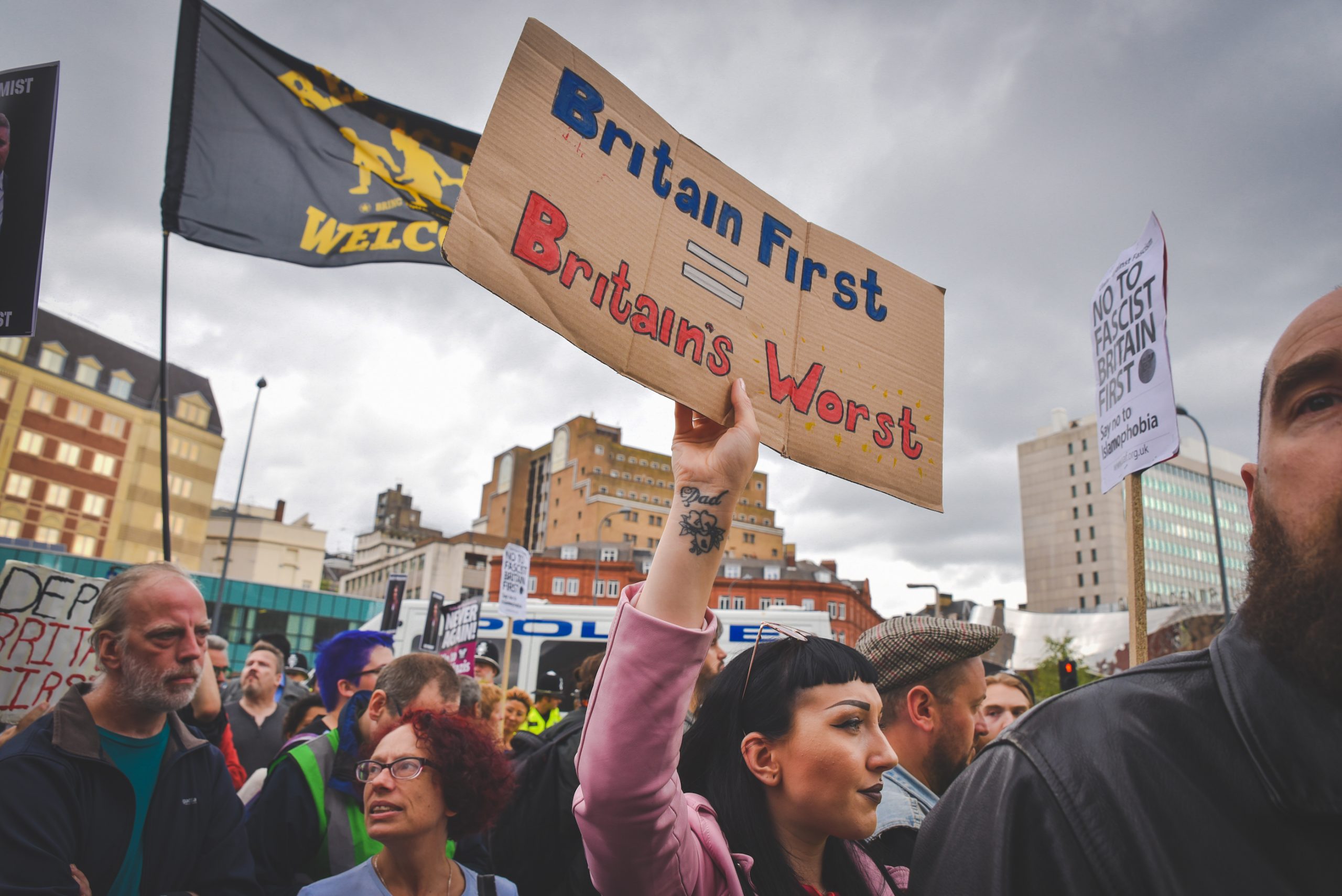 On 16 June 2016, Thomas Mair ambushed Labour MP Jo Cox at the library where she held her surgery.  This should have been just another day in her constituency. But it wasn’t.

Mair drew a sawn-off rifle and shot Cox in the chest. He then dragged her between two nearby cars and stabbed her repeatedly.

When Bernard Carter-Kenny, a 77-year-old man, tried to intervene, the neo-Nazi attacked and stabbed him too.

“Britain First, keep Britain independent,” he said during the attack, in reference to the far-right organisation. “Britain will always come first.” He yelled: “This is for Britain!”

There were just nine far-right prisoners in 2017. This figure grew to 33 by 2019 and now stands at 44. Thankfully, the authorities have been wise not to house them all together.

Militant Islamists make up 77% of all convicted terrorists in the UK. However, the overall number has fallen by 5% since 2017 and roughly flat-lined for almost two years.

Meanwhile, the proportion of far-right terror prisoners has grown to 18%.

The UK is facing an upsurge in neo-Nazi activity. Yet this fact is barely registered in the media.

Perhaps we’ve become blasé about the far-right and the threat it poses to our society, its institutions and even our people.

Perhaps it’s also due to the fact that the Conservatives have moved further right under Boris, making it seem less dangerous.

It was just a week later that UKIP leader Nigel Farage would skate over Jo Cox’s violent death in his ‘Independence Day’ speech.

Many people on the anti-migrant right tried to play down Thomas Mair’s politics and reduce his actions to mental illness.

This was in stark contrast to earlier fascist killing sprees.

There was no denial when ex-BNP member David Copeland launched a nail-bombing campaign against blacks and Asians and gay men.

Both Copeland and Mair were fans of the American neo-Nazi group National Alliance and bought items from the group’s website.

The National Alliance no longer exists, but it was openly fond of violence and its leading figures even praised the 9/11 World Trade Centre attacks.

“What happened this week is a direct consequence of the American people permitting the Jews to control their government and to use American strength to advance Jews’ interests,” said William Pierce, the founder of the National Alliance.

“Anyone who is willing to drive a plane into a building to kill Jews is alright by me,” wrote Billy Roper, who was a National Alliance organiser at the time.

“I wish our members had half as much testicular fortitude,” he added.

Thomas Mair spent more than £620 on items from the National Alliance, including subscriptions to magazines, books and weapons manuals. I’m just surprised Mair didn’t own The Turner Diaries, the novel that made William Pierce infamous.

Yet we were supposed to believe the killing was the act of a mad man. The terrorist has mental health problems, but his political motives were as clear as tap water. He shouted “Death to traitors!” on his first day in court.

The fact is that Thomas Mair had amassed a collection of white supremacist books and literature on the Third Reich.

His local library revealed that Mair had spent a lot of time reading about mass shootings in the US and Anders Breivik, the Norwegian neo-Nazi who killed 77 in two terrorist attacks on 22 July 2011 to protest against the Islamification of Europe.

The possibility of far-right lone-wolf attacks may be more likely today than in the past.

Neo-Nazi groups have made other MPs targets. Labour MPs like Rosie Cooper and Luciana Berger have been targets of threats and even assassination plots.

The individuals who made these threats were both linked to National Action, a self-avowed neo-Nazi group, which was banned in 2016 following its celebration of Cox’s murder.

It’s no coincidence that the number of far-right extremists convicted of terrorism charges has risen year on year ever since.

“There are non-whites and Jews in my country who all need to be exterminated,” said Raymond.

Just in case the reader had any doubts, Raymond added: “As a teenager, Mein Kampf changed my life. I am not ashamed to say I love Hitler.”

National Action was a small organisation with 60 to 100 members. Its members are people who have given up on the electoral road and decided to go back to the streets.

Rather than attempt to repackage its agenda, National Action was a reversion to a past era when the far-right was less restrained.

The organisation distributed leaflets calling for Britain to be “cleansed” of various ‘parasites’.

This represented a return to the days of march-and-grow tactics on the British far-right, before its long voyage into electoralism.

A week before this article went to press, four neo-Nazis were convicted for membership in National Action, including Miss Hitler beauty contestant Alice Cutter, AKA ‘Buchenwald Princess’.

During the trial, according to the BBC, “jurors were shown messages in which Cutter joked about gassing synagogues, and using a Jew’s head as a football”.

Benjamin Raymond was named in the trial as a co-founder of the group, and cited for his communications with its former members, following the ban.

However, Raymond has never been prosecuted and now styles himself as a far-right ‘radicalisation expert’ on his Twitter account.

Given his repeated tweets against Black Lives Matters, of course, it’s hard to take seriously.

Ten years ago the British National Party (BNP) seemed to be in a strong position.

BNP leader Nick Griffin had won a seat in the European Parliament and built up more than one million votes in the UK.

This was after a decade of working to mainstream the far-right movement.

It seemed like Griffin was on his way to real power. He had spent more than 30 years building his reputation in the National Front but had made a strategic choice to pivot his rhetoric towards a cultural and civic nationalism when he became party leader.

However, Nick Griffin’s gains were not enough to satisfy the hard-core of the British National Party’s base. The party was soon wracked with infighting and began to crumble.

The difficulty for the far-right was always making its ideas saleable to a broad public. The BNP had failed to break the mould.

The British National Party was soon overtaken on the street by the Israeli-flag waving English Defence League (EDL) and, in the mainstream, by the distinctly less Philosemitic UK Independence Party (UKIP).

Tommy Robinson rose to prominence and the EDL took over the anti-Muslim agenda of the BNP, whereas UKIP became a more respectable vehicle for Euroscepticism.

Eventually, Nick Griffin was forced out of the BNP after his five-year term in Brussels was up. He didn’t manage to build a career as an MEP like Nigel Farage.

It turned out that neo-Nazis had less patience for their leader to be wining and dining in Belgium, even though there were plenty of extremists in the European Parliament for Griffin to hook up with.

In the meantime, UKIP absorbed the BNP base and combined it with disaffected Tory voters who wanted to give the establishment a kicking.

The result was UKIP’s record-breaking 4.8 million votes in the 2015 European elections.

Since the decline of the BNP and the rise of UKIP, the British far-right has been fragmented and significant elements have favoured a return to street-level action over ‘respectable’ politics preferable. National Action was the first of these organisations to do so.

Farage has been adept at playing the far-right when it suits him while keeping them at a convenient distance. He always had his eye on bigger game. His primary mission has always been to take on the Conservative establishment, not stay on the sidelines.

In some ways, Brexit has taken the wind out of the far-right because, for once, it got what it wanted. The Conservative government has appropriated its toxic nationalism for its own short-term purposes. But this does not mean those forces have gone dormant.

The row over statues has shown that the ex-football hooligans, skinheads and semi-retired bullyboys are still around.

The sight of bald men raising their arms in Nazi salutes by the Cenotaph ought to wake us up.

Heaven help us if a neo-Nazi vigilante decides to take revenge for Sunday’s Reading attack.

With the tabloids in a froth over the killer’s refugee status – Khairi Saadallah is a Libyan national – they might as well be grooming one.