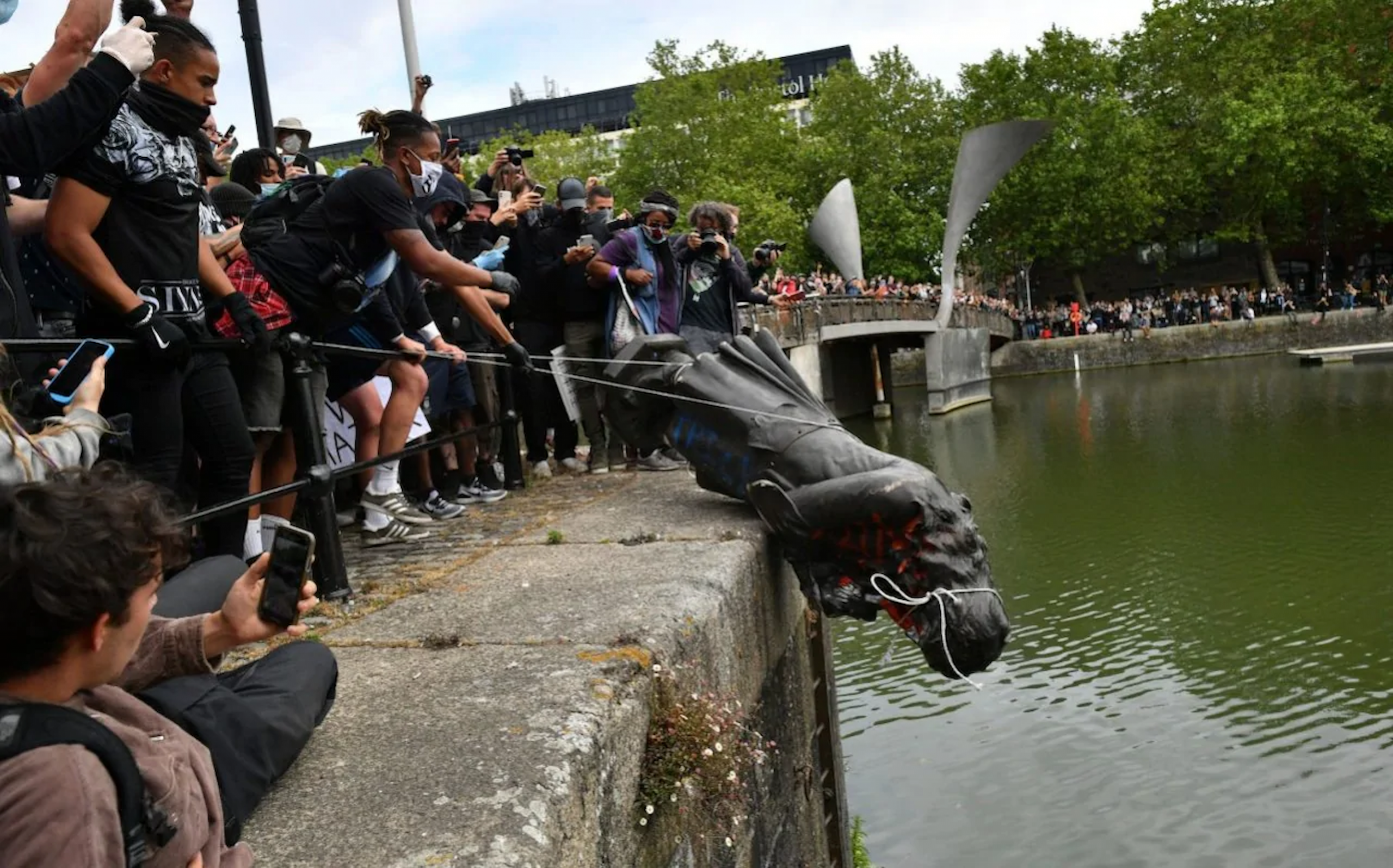 Or at least we’d prefer to think there aren’t. The statue of Edward Colston was torn from his plinth and fell to the ground amid a raucous crowd of activists.

It was a great sight for local campaigners, who have been calling for the slave trader to be removed for years.

Now it’s done. Colston has fallen. The twist is his statue was rolled from the public space to the harbour where he was thrown into the canal.

This was the very harbour where his ships docked before heading to African shores and then to the Americas.

The Royal African Company, to which Edward Colston belonged, transported more than 84,000 people – including children – to the Americas from 1680 to 1692.

An estimated 19,000 people died during the journey across the Atlantic. The Africans sold into slavery became an integral workforce in the growing sugar economy and the tobacco trade.

The role of slavery was to complement more expensive labour in England, where the working-class was toiling in the emergent market order.

The English ruling class was still in the early stages of empire-building, but its reach already extended to Ireland and North America.

Over the next 200 years, the English colonial project would grow into the British Empire with a stranglehold on India.

It was in 1895 that the statue of Colston was made and raised in Bristol. The original plaque read: “Erected by citizens of Bristol as a memorial of one of the most virtuous and wise sons of their city.”

The monument gained listed status in 1977 to guard against its removal. But, it has only grown more controversial over the years. Someone scrawled ‘SLAVE TRADER’ across its base in 1998.

Still, the Society of Merchant Venturers has been lobbying to defend the statue for years.

When local campaigns got the plaque revised, the Merchant Venturers argued for a watered-down version of the message – swapping ‘trafficked’ for ‘transported’ in reference to the slave trade.

The sight of Edward Colston crashing to the ground has generated fury and phoney outrage in the UK press at a disregard for history and public property.

Right-wing talk show hosts like Julia Hartley-Brewer have made out that the statue was raised when different moral attitudes towards slavery prevailed.

Yet the fact that ‘different’ moral attitudes are now dominant doesn’t mean we can remove it though. Apparently, we must respect monuments to dead murderers no matter what.

Somehow I don’t think Hartley-Brewer would make this argument about a statue of Joseph Stalin.

The most common response is that the statue is a part of history and therefore shouldn’t be torn down. The problem is that longevity is not the same thing as legitimacy.

This is a very selective argument. The UK was not having such a debate when American troops marched on Baghdad and Iraqis tore down the statue of Saddam Hussein.

It’s undeniable that Saddam is a part of Iraqi history. Perhaps his statue just wasn’t up long enough to accrue Colston’s legitimacy.

The other common response takes issue with the destruction of public property rather than the removal of the statue itself.

Labour leader Keir Starmer and Tory politician Sajid Javid agreed that the statue of Edward Colston should be removed “democratically” – just not by force.

On the one hand, the act of tearing down the statue is an act of civil disobedience. It’s about the destruction of public property.

On the other, plenty of ‘illegal’ acts are legal. Rosa Parks sitting in the ‘wrong’ section of a bus, for example.

It’s like saying racism is legitimate because most people are racist. Not because the US constitution, in this case, prohibits it.

The same holds true in Britain. Why should Bristol keep a monument to someone who violated human rights and trafficked in slaves?

Just because racism remains common in today’s United Kingdom doesn’t mean it is right for the state to promote it indirectly, this way.

The Black Lives Matter protests in the US helped inspire the UK protests.

BLM UK has breathed new life into old campaigns for reclaiming history and public spaces, particularly the Oxford Rhodes Must Fall campaign to remove the statue of Cecil Rhodes at the university.

This shouldn’t be controversial either. Rhodes was a monster who carved out colonies in Southern Africa to enrich himself.

He waged a war against the people of Matabeleland and killed thousands of people to establish a country he named after himself: Southern Rhodesia (which wouldn’t be renamed until 1980).

The impact of the BLM protests have gone beyond the so-called national debate about history. The British government is clearly concerned about mass protests.

Soon after Colston was brought down, Prime Minister Boris Johnson felt the need to give a speech calling on BLM activists to protest “peacefully”.

Meanwhile, London Mayor Sadiq Khan has ordered a review of monuments tied to slavery and called for such statues to be removed.

The Museum of London Docklands has already removed a monument to Robert Milligan, a slave trader who owned hundreds of slaves on Jamaican plantations.

The museum has said it wants to “respect” the wishes of the community.

There are certainly a number of imperial monuments that the city could do without. The statue of Jan Smuts, who helped set the ground for apartheid, in Parliament Square comes to mind.

Incidentally, Smuts is almost directly opposite the statue of Nelson Mandela, the man who would undo apartheid.

Another case would be the statue of Charles James Napier in Trafalgar Square.

Napier captured Sindh in 1843 and became its first governor (a post he held until 1847). He was later made Commander-in-Chief of British troops in India.

Before being sent to India, Napier was chief of troops in Northern England from 1839 to 1841, where he crushed the Chartists protesting over poor wages and working conditions.

This was pretty typical of Britain. Colonial forces were often used against English workers. Troops deployed against the Irish were later redeployed at Peterloo to massacre pro-democracy protesters.

This is why it makes no sense to view the English working class in separation from the British Empire. Nor can the subjects of empire be viewed in isolation from the history of working-class struggles in the UK.

It’s the same long story of oppression and struggle.

The people defending statues of slave traders and blood-soaked colonialists are committing themselves to defending one side in this long story.

The fact that they disavow this history is a testament to doublethink and bad faith.

Photograph courtesy of Prachatai. Published under a Creative Commons license.