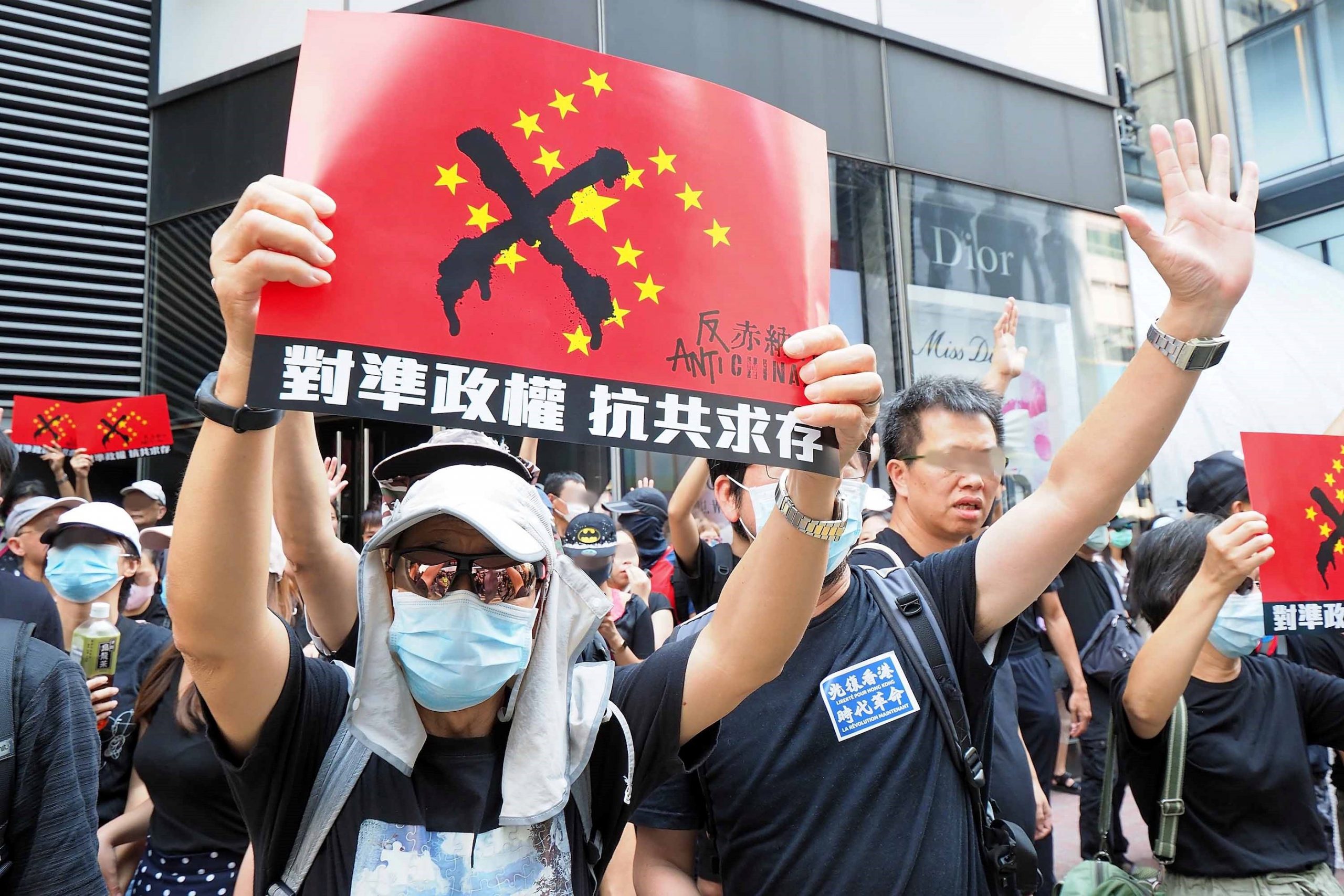 Communism has been replaced by fascism. Student protestors, Hong Kong.

The orchestration of Chinese politics by the Communist Party continues. But this year, the National People’s Party Congress was different.

In all likelihood, Xi Jinping’s leadership was assured.

The Coronavirus pandemic, the trade war with the US and the severe problems in Hong Kong showed that  China’s rise as an economic, political and military power is sincerely threatened. Hence, the need to confirm Xi’s leadership.

The party chairman claims the legacy of Mao Zedong and Deng Xiaoping. This is the problem, as he is neither the “great leader” with revolutionary charisma nor is he a visionary like Deng Xiaoping, possessing the same effectiveness and determination.

For those familiar with Chinese history, the disjuncture makes sense. Deng is largely regarded as the architect of modern China in having guided the country to rise from a poor agricultural state to a modern industrialised power, which,  in 2019, became the second-largest economy in the world.

Xi Jinping came to power in 2012. The collective leadership style in China was then replaced by his strong man style with no ideological flexibility and no political pragmatism. Xi brought ideology more strongly back than at any time since Mao. His reign’s branding is predictably nationalist:  “China Dream”, or so he calls it.

Xi’s predecessors circumvented errors through consensus-based decision-making processes, which also took into account the opinions of rival camps and balanced conflicting interests. Their regimes were by no means democratic in a Western sense, nor were they perfect in Chinese terms, either. Corruption was pervasive at incredibly high levels.

The new Communist Party chairman began his reign with the promise to stop corruption. However, the promise was nothing more than an attempt to bring the party in line with his rule.

Over the past eight years, Xi tried to reinforce his authority at the expense of ministries, local and provincial governments.

As the leader of the ruling party,  he has rapidly consolidated his power, even having his ideas mentioned by name in the constitution — an “honour” that had been reserved only to Mao Zedong until now.

The “Xi Jinping Thought” means that any challenge to the president will be seen as a threat to Communist Party rule and to China as a whole.

Xi’s ideology is based on three principles: The nation, the party and the leader. The state prohibits any manner of dissent from it in Chinese life.

There has been an important shift in Chinese governance. The government has grown strongly controlling. As its legitimacy declines, the leadership intensified repression and reverted to Maoist traditions of propaganda and political education.

Streamlined and centralised structures of power and the extended role of the party are dominant. The collective leadership has been scaled back to a one-person rule of the “supreme leader”.

In The Perfect Dictatorship, by Norwegian sociologist Stein Ringen, Xi’s regime is dubbed a “controlocracy”.

This shift has happened step by step but systematically enough to establish the regime as radically different from that of Deng Xiaoping and his followers.

Websites are shut down. Lawyers, activists, and writers are arrested and a general chill has descended online and in the media.

Equally important, the Chinese government is steering the use of new technologies. Cloud computing, big data, and artificial intelligence (AI) are all being deployed to strengthen the central government’s control over society.

China’s hopes to continue its path of economic growth have been shattered by COVID-19. The pandemic has shaped up to be one of the Communist Party’s biggest-ever challenges.

The Chinese economy shrank 6.8 per cent year-on-year in the first quarter of 2020, after  6 per cent growth in the last three months of 2019, compared with market forecasts of a 6.5 per cent decline.

It is the first contraction of China’s GDP since records began in 1992, reflecting the severe damage wrought by the Coronavirus crisis. Car production recorded the sharpest decline (-44.6 per cent).

In preparation for this year’s National People’s Party Congress, in an official communique, the party repeatedly reaffirmed that China’s long term growth potential will not be affected by the short term fallout of the pandemic.

Xi’s economic strategy will remain the same as it was before Coronavirus. The Belt and Road Initiative (BRI) and the high tech 863 Program, will be accelerated.

In maintaining this scheme, Xi Jinping seems increasingly tempted to cast caution aside, embrace ambition, and reconstitute China as an ideological power state.

Xi is obsessed with becoming a historic global leader. But it’s not clear he’ll get there.

Neither the economy nor the trade war with the US is the crucial point. Xi’s destiny hangs on the Hong Kong crisis.

Political developments are not predictable, even in a totally controlled system like China. Before the pandemic, protests in Hong Kong were out of control. The Coronavirus crisis brought them to a near-standstill.

The National People’s Congress in Beijing just approved a security law to ban “separatism” and “turmoil” in Hong Kong. It’s a reaction to the mass protests against its pro-Beijing government, which began in March 2019.

Xi Jinping appears determined to permanently shut down Hong Kong through repression and end the “one country, two systems” principle after only 23 years instead of the guaranteed 50 years.

There is no room for multiple identities in his nationalist vision of China. The new security law applies not only to prison sentences for  Xi’s harshest critics and to freedom of expression, but also to “patriotic” education in Hong Kong schools.

China’s leadership gets very nervous whenever it feels threatened and criticised, particularly by the openness, democracy and separation of powers that’s prevailed in Hong Kong until now.

China’s government thinks that it is now or never to solve the Hong Kong crisis.

As long as Beijing feels that it can decide without any big risks internationally, it will seize the opportunity.

China would like to take advantage of the weakness of a  wavering United States, as it is one of the countries hardest hit by the Coronavirus pandemic. Washington’s domestic failures have opened up such opportunities abroad.

A government that can no longer offer its citizens protection is also no longer a global power. Beijing hopes to fill this vacuum.

For example, assistance to Italy and to the WHO suggest more competent crisis management than others.

But China would not be the China of Xi Jinping if this could be done without pressure against those who ask uncomfortable questions, as Australia did. As a consequence, a trade war was declared.

Critical questions for Beijing concerning the origin of the Coronavirus, as expressed in a recent letter from European ambassadors, are simply censored.

As long as this is possible without any major problems, China will pursue its new strategy of consolidating its world power.

The Communist Party has realised that if it wants to safeguard Chinese hegemony over the long-term, it is not enough to be in control of China itself, but a world power.

This is a “weaponisation of access”. Anyone who is too critical of Beijing may no longer do business with China or is censored like the Chinese population is on a daily basis.

Pressure from the outside and critics from inside could very likely create a second Tiananmen Square-type democracy movement. Without any doubts, this will hurt Xi’s legitimacy.

In 1989, China’s political leadership was purged as a consequence of the events the previous year, in Tiananmen Square. This time, the purges could be even greater.

The starting point could also be a massive uprising of Chinese youth, economically disenfranchised by the Coronavirus crisis.

Is this the reason why Xi Jinping orchestrated — just after the first phase of the pandemic — a National People’s Congress as a jubilee event for himself and his policies?

We’ve seen this before. Let’s not forget the celebrations of the Soviets in the late 1980s, the DDR’s 40th-anniversary celebrations in 1989 as well as the Romanian Communist party congress at the end of the Ceausescu regime.

The same happened in Portugal at the end of the Salazar dictatorship and in Spain when the Franco regime was removed.

This year’s National People’s Party Congress could very well be a similar precursor to regime change for China, too.

A lot will depend on the behaviour of the international community, the European Union, in particular.