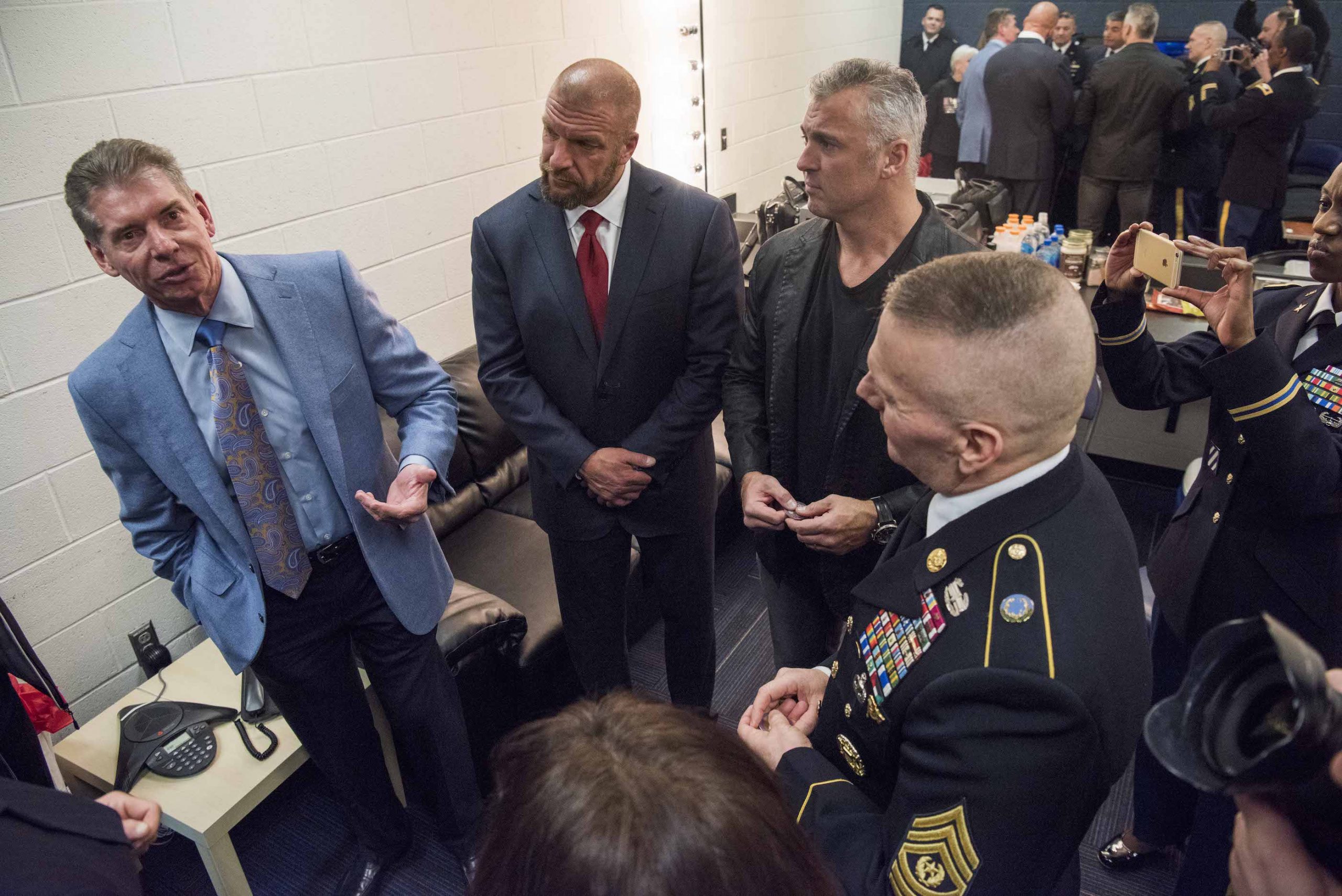 Vince McMahon and the Presidency

President Donald Trump could turn to any political expert in the world for economic advice. Instead, he chose to turn to Vince McMahon, the PT Barnum of professional wrestling.

The subject, of course, was reopening the US economy, after being battered by COVID-19.  That the CEO of World Wrestling Entertainment would qualify is of course, on the surface, crazy.

Not for Trump. In fact, it’s a perfect fit. The two have more in common than meets the eye. Both billionaires made their fortunes on the East Coast (with a little help from Daddy) and neither has been afraid of bad publicity.

Vince McMahon is the better businessman. He wiped out all the competition in his industry and turned a regional family-owned business into a multibillion-dollar global brand. Not only has the president failed to achieve anything comparable. Trump has gone bankrupt more than once.

However, the McMahons have more in common with the Trump family besides class loyalty. The two dynasties are a part of the establishment by any definition, yet they both practice nothing less than the basest forms of populism.

Neither Donald Trump nor Vince McMahon would be regarded as having great respect for conservative Christian family values. Trump and McMahon have both flouted convention in public life and preferred to take an ‘outside’ route to the mainstream.

It makes sense that the two would be happy to work together. Indeed, Trump and Vince McMahon are so close, he even appeared on episodes of RAW. Trump even dared WWE network chairman to a high-stakes match in 2007.

“I’m taller than you. I’m better looking than you. I think I’m stronger than you, and I’m here to challenge you to a match at Wrestlemania,” said the future president.

“It’s the battle of the billionaires!” McMahon crowed.

The two agreed to hold a match where they would nominate a fighter to perform on their behalf. However, the stipulation was the crucial ingredient. The loser would have their head shaved there and then. This was a great idea given the infamous quality of Trump’s rug omelette hairdo.

Donald Trump got to play the hero – the babyface, in wrestling parlance – while Vince McMahon would play his classic evil boss role as heel. Unfortunately, the TV character McMahon was reluctant to step into the squared circle with the Manhattan tycoon.

So the two men picked fighters to compete on their behalf. This didn’t stop Trump from getting involved in the action. He even had his own move – the hostile takeover!

As agreed, the WWE chief lost and had his head shaved in front of the audience. He squirmed and squealed as his quaffed hairstyle was brutally slashed off before a raucous crowd. Once more, Trump’s precious rug omelette was safe. The same can’t be said for the rest of humanity.

A Real Son of a Bitch!

Vince McMahon is advising an administration his wife also served in. Former WWE CEO Linda McMahon was in the Trump cabinet until April 2019 when she left to chair a Republican Super-PAC just in time for Trump’s 2020 reelection campaign.

Mrs McMahon had presided over the Small Business Administration (SBA) for two years. It was an odd choice, not least because WWE had ceased to be a private family-owned business when it went public in 1999.

This is very far away from the American fables of small businessmen triumphing against adversity. Even in the old days, the wrestling industry was run like a cartel, where regional promotions held sway over captive markets known as ‘the territories’.

Of course, all of the value was generated by the wrestlers who had to get into the ring and make sure the crowd would pay to watch and cheer. The territories allowed wrestlers to move from place to place and rent themselves out, but they had no guaranteed money, no holidays, no health insurance and no pensions.

The territories are long gone today. Now wrestlers can either work matches for small independent outlets or join WWE. No companies have come close to challenging WWE since Ted Turner’s World Championship Wrestling (WCW) died a sorry death in 2001.

The story goes back 40 years. Vince and Linda McMahon took over Titan Sports in 1980 and embarked on an aggressive takeover strategy to remake the wrestling industry. He would wipe-out the competition by buying out their television time and stealing their talent.

Each wrestling promoter respected each other’s business – until Vince McMahon came to town. As McMahon once put it: “It takes a real son of a bitch to be successful in this business!”

At the same time, Trump was embarking on his own journey having inherited his father’s slum kingdom. He had extracted fat tax breaks from the City of New York to cover the costs of his projects, but he later turned to investing in casinos. This was when the two families finally came to work together for the first time.

The Trump Organisation hosted many of McMahon’s blockbuster events at its casinos in Atlantic City in the 1980s. The partnership of gaudy real estate and over-the-top theatrical violence was a perfect match.

This was the ‘golden age’ of wrestling before kayfabe died and fans still believed the matches were real (or at least some of them did). Once the shine was lost, McMahon decided to reinvent the wheel.

What became known as the ‘Attitude era’ began in 1997. Kayfabe was dead, so why pretend anymore? No one believes it’s ‘real’. Not even the most die-hard fans. So McMahon gave a special announcement.

“We borrow from such programme niches as soap operas like Days of Our Lives, music videos such as those on MTV and daytime talk shows like Jerry Springer and others,” McMahon told his audience.

“We also think you’re tired of the same old simplistic theory of ‘good guys’ versus ‘bad guys’,” he added. “Surely, the era of the superhero who urged you to say your prayers and take your vitamins is definitely passé.”

“Therefore, we’ve embarked upon a far more innovative and contemporary campaign that is far more invigorating and extemporaneous than ever before,” McMahon said. “RAW and the War Zone are definitely the cure for the common show.”

He gave the industry a new name ‘sports entertainment’. No longer would pro-wrestling pretend to be anything other than a spectacle of semi-choreographed violence, corny dialogue and ridiculous plot lines.

Sports entertainment was the perfect medium for Trump’s ego. There’s nothing like the sound of a steel chair colliding with the skull of a well-built athlete – especially when all sides have agreed who will lose. Trump has yet to learn politics isn’t the same.

All the Way from Minnesota

The peculiar tale of Trump’s fascination with wrestling doesn’t end there. It’s often forgotten that it was a pro-wrestler who helped inspire Donald Trump to pursue the presidency for the first time, but not the last.

It was none other than Jesse ‘The Body’ Ventura, the Reform Party candidate who became governor of Minnesota in 1998. Trump flew to Minnesota and met Ventura. He was so impressed he later ran as a presidential candidate for the same party.

The Reform Party was a strange beast. It brought together dissatisfied Republicans and even inchoate forces from progressive and libertarian circles. It was a party for anyone who detested NAFTA. So it was the perfect vehicle for Donald Trump.

Many people say President Trump does not really care about anything. His views shift with the times. This is true up to a point, but it’s also true that the substrata of his worldview has been consistent for decades: opposition to free trade and open borders.

This is why Trump backed the Reform Party at a time when fellow billionaire Ross Perot was railing against NAFTA. He would later stand as a presidential candidate and help counter Pat Buchanan’s campaign for the same party.

The wannabe Machiavellian operator Roger Stone persuaded Trump to run in 2000. His plot was to help the GOP by preventing a third-party spoiler effect. It wasn’t enough to guarantee a clear victory for George W Bush. Fortunately, the Supreme Court was there to step in.

Jesse Ventura is still the most successful figure in the Reform Party’s short history. He left the WWF for Hollywood after his attempt to unionise the wrestlers was squashed. He wanted to make it possible for wrestlers to organise and get more than the precarious contracts they had to rely on.

It would later turn out that main eventer Hulk Hogan broke the news to McMahon before the plan could get going. Of course, the Hulkster denies this, but it was McMahon himself who claimed it was Hogan during his testimony in the 1993 steroids trial.

Today, Ventura prefers to back Green or Libertarian candidates. He has very little time for Donald Trump and his anti-migrant politics. Meanwhile, wrestlers still risk their health with no insurance and few guarantees of security.

The politics of ‘alternative facts’ and ‘fake news’ may be the perfect parallel to sports entertainment. But the reality of hyper-exploitation and human suffering isn’t going away. Politics may be the ultimate blood sport.

Screw it. Vince McMahon should run for President. He’s obviously a great businessman and clearly that strategy of leadership works for the American people. pic.twitter.com/bCLUGq3Ypa

Photograph courtesy of the Joint Chiefs of Staff. Published under a Creative Commons license.