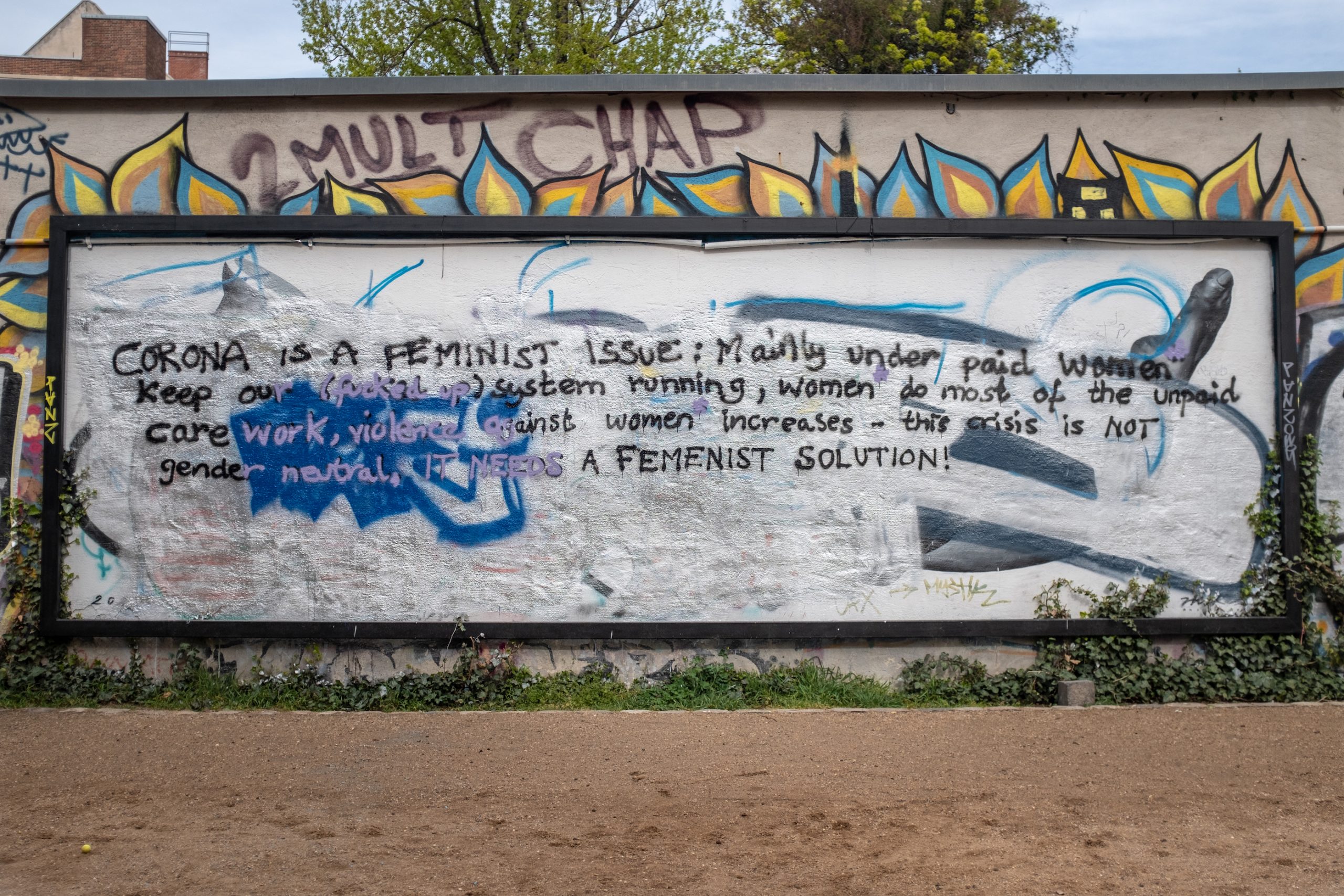 My neighbourhood is a book. If you want an education on the most important topics of the day, all you have to do is read the walls. By the time you’ve walked four blocks, you’ll have a PhD in the zeitgeist.

That is if you pay attention. With so much visual stimuli, its easy to take all the messaging for granted. Whether it’s a punk show advert or an anti-fascist flyer,  there’s always something. Usually, in English too.

For some, it will be passé. Street art is so 2004, after all. Banksy had to go to Bethlehem to revive his career, not inner-city Berlin. This is just Shoreditch-in-exile or the new New York for bohos who can’t afford Brooklyn anymore.

For others, like me, who have lived in Neukölln for ten years, it’s just the neighbourhood. This is how it communicates what it cares about. If everything were in German, nobody would be able to understand it.

In an era in which we live everything online, the fact that I can learn about crises like Coronavirus while taking my dog on her daily walks is cool. At least I’m not staring at my computer or walking down the street staring at my iPhone.

Okay, so I’ll pull it out a few times to take pictures of everything. But you get my point. It’s really refreshing to leave my flat and receive so much information for free. Sometimes standing next to my neighbours, taking in the exact same.

Particularly at a time of intense isolation like now, where I have to spend most of my days at home, avoiding others. There’s only so much enlightenment you can get from Facebook and Twitter, and endlessly re-reading The Guardian.

Hence, my surprise this morning, when I encountered the feminist messaging in the first photograph. A block from my flat, that’s where I take my dog every morning to do her business, before breakfast. The surprise was worth it.

The same goes for this sticker, affixed to lampposts and electrical boxes throughout the area. Issued by my favourite local vegan pizzeria just off of Hermannstraße, I encountered it in early March, when the Coronavirus crisis first began to kick in.

I’d walked several blocks to my favourite cafe to pick up several Simit (Turkish bagels) for breakfast. There it was, at eye level, on the appropriately named Karl-Marx-Straße. This was the first public acknowledgement of hoarding I’d come across.

Local markets had not quite begun to get emptied of essential goods yet, by fearful customers worried about going hungry. But, staples like toilet paper, pasta, and at pharmacies, hand sanitiser were already hard to find by noon.

Thankfully, the situation is nowhere near as bad as what I’ve read about in the UK and US. Friends have repeatedly posted photos of bare store shelves the last few weeks and food queues. It looks like the Soviet Union in the 1970s.

As someone who was raised on punk during the Cold War, encountering flyers like these take me back to that time, too. Yes, there is an element of nostalgia to it. But the style is still obviously appropriate, particularly given its subject matter.

Few aesthetic approaches to politics make more sense than collage. Though the newsprint version of it is less common today than it is found in music and video, the style remains as important, if not as consistently political as it once was.

Though this montage makes explicit reference to Gee Vaucher, the visual designer of the legendary British punk band Crass (1977-1984), there were countless other artists at the time doing work like this. Few were as identifiable as Vaucher, though.

The idea that older styles would find new life during times like this shouldn’t be surprising. The 20th Century over-produced artistic counter-cultures, particularly those attuned to framing shock, in response to world wars and social crises.

Throughout the Coronavirus crisis, few topics have remained as fraught as freedom of movement and refugees. Offering yet another opportunity to close borders, both inside and outside the European Union, it’s been a shot in the arm for far-right parties.

This storefront messaging is a case in point. Put up as part of the UN’s International Day Against Racism (21 March,) such messages of solidarity are common to my immigrant neighbourhood. The fact that the writing was in German especially stood out.

For diversity advocates though, the language is entirely appropriate. Arguments against freedom of movement and multiculturalism tend to be made by ethnic and cultural Germans, not internationals living here, albeit with certain exceptions.

For foreigners like me, the use of this city’s native language is also its own ironic reminder about how bad my German is. My Arabic, for example, is far better, from living here as is my French and Italian, both of which I have to use for my work.

But, my German is not so poor that I can’t spot an adaptation of a phrase, common on the left. In this instance, the substitution of Faschismus (fascism) with Corona. The message is clear, as is its employment in the form of graffiti. Blood red, that is.