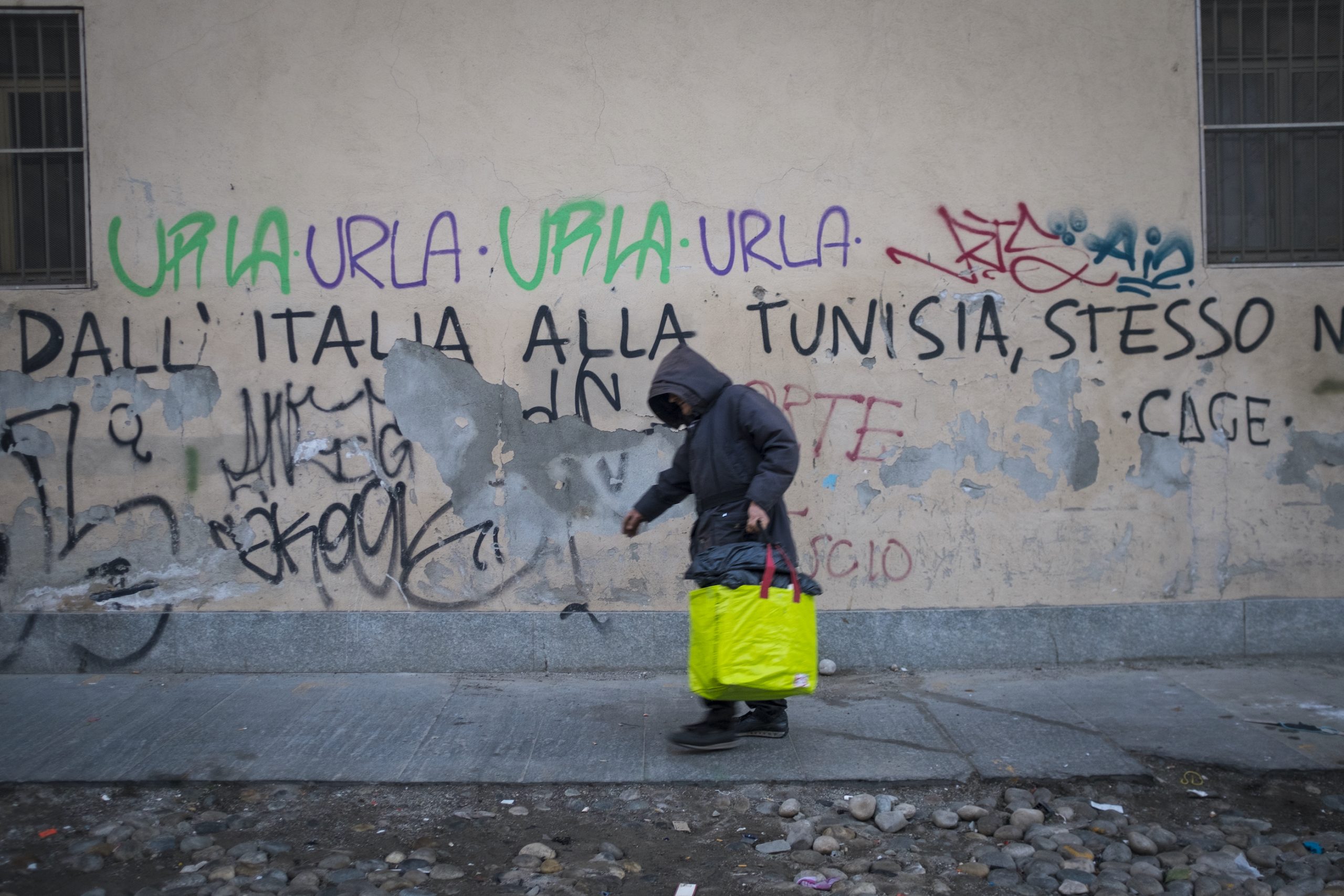 Social distancing used to be about class. Balon, Aurora.

I’m in the second week of self-imposed Coronavirus isolation, and the fourth day of the nationwide lockdown mandated by the Italian government to stop – or at least slow – the epidemic.

I leave home only for two reasons: To buy food, once every two days, or dispose of the garbage once a day, that, with a family of three stuck at home for fifteen days now is piling up much quicker than usual.

It’s time to take out the garbage. I’m slowly pushing the huge black sack containing four smaller bags with recycling. Before I cross the road to the dumpster, I notice it. The absolute silence.

I’ve been living in this area for twenty years. There’s not been one moment, no matter the hour, or the season, I’ve not seen a car pass my home, or heard traffic noise in the distance.

Now, everything sounds muffled. It’s like walking in a dead city. Except the people are still here, in their homes, waiting for the epidemic to pass.

All my life I expected a global catastrophe. Like most of my generation, I spent my youth feeding on a diet of books and movies depicting all sorts of disasters, from nuclear holocausts to global pandemics.

Now that disaster has finally arrived and it bears no resemblance to their fantasies. Almost every cliché of the genre has been turned upside down.

Death is everywhere, but is almost invisible, if not for the continuous sound of sirens in the background.

The social fabric, at least in Italy, has not collapsed. People are even more polite than before. But they’re distant.

You can feel the fact you’re not welcome in their presence, now that the government-mandated a metre of “social distancing”.

A phrase nobody knew one month ago, it’s now used in every Internet conversation you have, with co-workers, relatives and friends.

The food supply chain has not broken yet in Italy, another failed disaster movie cliché. Almost everything is still available, with peculiar exceptions.

Sushi is there, but flour is starting to be scarce. Vegetables are resupplied at almost the daily rate but rubbing alcohol has disappeared.

There was some panic buying the first few days, heavily covered by the Italian media, but it has subsided without much fanfare. People don’t fight in aisles for the last bit of pasta.

And there’s, of course, tons of toilet paper, not much of a prized item in a country that uses water-spraying bidets. But things are not back to normal.

The mandatory 30 minute-long line at the entrance of every supermarket and the fact everyone queueing is desperate to maintain their distance is a reminder that we’ve met the enemy, and the enemy is everyone else.

No one in the queue means me harm. But everyone could infect me and in turn infect my family. If this happens, there is a 20% likelihood of ending up in an intensive care unit, the overloaded front line of the fight between life and death

At home life is frozen at a desk with one or more computers, reading social media timelines on one, while working on another.

I live at the top floor of a tall building, in a spacious flat with a great panorama on both sides, so claustrophobia is not an issue.

But when my mind is not focused on work – now a welcome distraction from my grim newsfeed –  I long for the short walk to the garbage.

It’s not much of a distraction but at least I’m outside for a few minutes. Listening with longing for any normal sound. Like a passing car, or a bus, or the chit chat of couples defying the lockdown.

But what you end up hearing is the silence. And the sirens. Close sirens. Distant sirens.

They tell me in Bergamo that sirens wail nonstop now, in every part of the city, a readymade concerto that nobody pays attention to anymore.

The first few days of the epidemic, we always kept the TV on, trying to get as much useful information as we could. But even that has now become a discarded habit, part of a different “us” that left our apartment with the last hope this could have been a quick crisis.

The endless stream of news, interviews and talk shows dedicated to COVID-19 in Italy has subsided, because people now want to think about something else, something normal.

Even totally unbearable quiz shows one wouldn’t be caught dead watching before the crisis has become a moving reminder of the “normal” life, the one we had until one month ago, before the dead started to pile up.

Every such program now bears some variation of the “recorded before the coronavirus” watermark.

Because people in the studio are sticking close together, we must not, as the 10-second warning advert reminds us on television every 10 minutes.

Don’t stay close to other people. Wash your hands. Don’t leave home unless you have to go to work or shop for food.

If you have symptoms, call the doctor, but don’t go to the hospital. If someone gets infected and their condition worsens, they have to call an emergency number.

That’s when the horrible part starts. The one that looks like the movies of my youth.

No one in my building has been infected so far. But I’ve seen the process of transporting a coronavirus victim to the hospital, by people wearing white containment suits, plastic goggles and masks.

It looks like a movie, but you can spot the difference. Reality feels different, I’ve come to realise

Italy is fighting now its most dramatic battle since the end of WWII, a battle that has been already fought in China and will be likely fought in the rest of the world soon.

We’ve come to realise we got caught unprepared. Our unpreparedness is costing thousands of lives. As of yesterday, the death tally surpassed even that of China,

At the moment it’s not clear why, but the Italian outbreak, and in particular of the Lombardy hotspot (the “red zones” as they’re called now) is markedly different from anything experienced before.

It is entirely possible and even probable that the virus had been circulating in Italy since January, as a batch of “unusual pneumonia” was detected in a northern Italian hospital at the end of that month.

The virus is now killing mostly people at the median age of 80 and killing them in scores. But it’s also making a lot of younger (median age 60) folks very ill, requiring their transport to intensive care units which are already at the limit of their capacity.

The race to win the coronavirus is a classic military race for resources and how and where to deploy them.

Italy has 5000 ICU beds. Lombardy, Italy’s wealthiest state, had 800, which are now in the process of being expanded to 1200. But that still might not be enough.

There’s a point I want everybody reading this to understand. Despite the fatalities, despite the evident shortcomings of how Italy confronted the virus in the first couple of weeks, there’s no other country I would choose to be in right now.

Without our public healthcare system, which is free and available to anyone, the death rate would be significantly higher. Our healthcare got significantly downsized and de-funded over the last decade because of irresponsible austerity measures. But it’s still here and it’s making a magnificent stand.

Make no mistake: we could have done better. When this is over, a sober reckoning of what went right and what went wrong will be necessary.

But when an epidemic like COVID-19 hits, a “modern” medical response demands affordable and available public healthcare. This is something many countries don’t have right now, as they discover that for many old or frail, or simply unlucky people, this is the difference between life and death.

As I finish writing this article, I’m preparing for another day of waiting. Waiting for the first meeting call of the day. Waiting for noon and a quick meal, never leaving my computer. Waiting to check the news, desperately hoping that Italy and China are the exceptions and that COVID-19 will fizzle out everywhere else, particularly in the US.

And waiting for 6 PM tonight, when Civil Protection will release the daily number of infected, recovered and dead. Waiting to see if the epidemic is finally peaking here. Waiting to have accurate statistics to tell us what everyone in this country wants to know: when the lockdown will be over.

That will be the day we can leave home for whatever reason, without having to carry a permit to show to one of the now-ubiquitous police cars patrolling the street right now, enforcing the lockdown.

That will be the day we finally take our car for a drive whenever we may fancy, maybe to the Alps, which now are towering 20 kilometres away from my home, mocking our frailty.