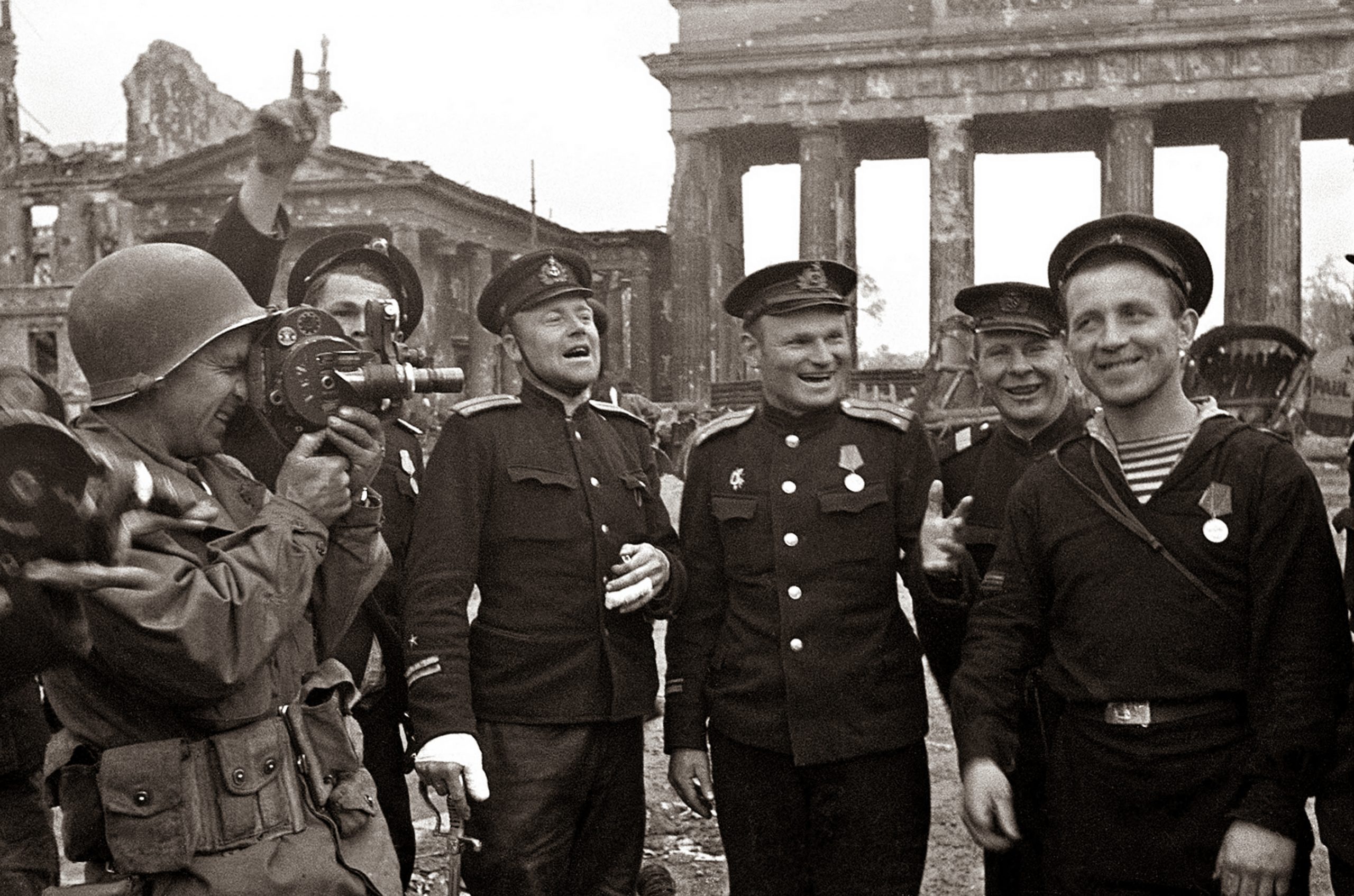 The rape of hundreds of thousands of German women in the waning days of the Second World War has historically gotten short shrift, both as crime and tragedy.

The reasons for this are various: from the enormity and variety of the atrocities committed in the course of the wars to the view that, given the brutal crimes of the Nazi regime, this sort of violence was to be expected (and perhaps deserved).

The fatuous moral reasoning underlying the latter position was abetted by the view that nearly all of the rapes had been committed by elements of the Red Army, and that this had been a systematic policy, ordered from above and condoned by the Soviet leadership.

This, in turn, synergised with a view widely held in Europe and the United States that the Soviet Union was populated by Mongols and other uncivilised groups.

This is only a sampling of the complex of issues addressed by German historian Miriam Gebhardt in her 2017 book Crimes Unspoken: The Rape of German Women at the End of the Second World War.

In just over 200 densely argued pages, Gebhardt catalogues the sexual violence. It was a free-for-all. German women, men, children, Jews and non-German slave labourers, are all violated by soldiers from the Allied powers.

This is a project whose importance cannot be overstated. It is important that suffering of the victims be remembered, and that this history is accounted for accurately.

Equally significant, the narrative of systematic rape at the hands of the purported racially inferior Red Army has fed into the manifold stories of victimisation purveyed by the German far-right.

It’s a discourse Germans are increasingly familiar with. In tandem with brutal aerial bombardments like Dresden, Germany suffered a fate comparable to the Holocaust.

Such narratives, curiously focus accumulated anger at invading minorities and migrants, who are akin to the ‘Mongols’ ushered in by Soviet forces in 1945.

For example, Alternative für Deutschland talk of rapefugees, particularly following the sexual assaults in Cologne on New Year’s Eve 2015, deliberately harkens back to this period.

The mass rape of German women has also given rise to a sort of numeric inflation. It was clear that the number of rapes was very large but determining exactly how large presents several complex and intractable issues.

One of the central problems in writing this history is the lack of adequate documentation.

A large proportion of the rapes occurred during the Red Army’s invasion of East Prussia and Pomerania, during which civic order was non-existent and in the course of which large numbers of refugees and otherwise displaced persons flooded into the countryside.

There was simply no one to whom one could report such crimes. Miriam Gebhardt argues that the rapes on the part of the Red Army were probably not a matter of systematic policy.

When the Yugoslav partisan Milovan Djilas asked Stalin about it, the latter is reported to have replied that it was understandable that soldiers who had come through fire and death might “have fun with a woman or take a trifle”.

Similar responses were given to interpolations by German communists, which seems to suggest at least passive approval of what was going on.

The first systematic research on this topic was done by a team led by the feminist scholar Helke Sander in the early 1990s.

Sander concluded that the number of rapes in the eastern zone alone had been roughly 2,000,000, comprising 100,000 in Berlin and 1.9 million further east.

Gerhardt views this as inflated, predominantly because of deficiencies in sampling and statistical technique. But she also notes that Sander had been involved since the 1970s in the “feminist struggle against sexual violence by men”.

This latter point is certainly true. Sander’s famous address to the 1968 SDS convention, in which she described the group as “an inflated mass of counterrevolutionary dough” was a key moment in the formation of the modern German feminist movement.

Clearly Sander’s political predilections were intimately connected to her scholarly agenda. But this in itself does not imply that her estimates of the numbers of women raped were inflated.

In any case, Gebhardt employs rigorous methods in her analysis. These involve analyses of police and hospital records and a complex process of working backwards from the number of surplus illegitimate births to the number of rapes that their incidence must imply.

Once again, there is an underlying inflationary proclivity against which Miriam Gebhardt sets herself.

To give just one isolated example, the late Belgian historian Tony Judt claimed in Postwar, that “between 150,000 and 200,000 ‘Russian babies’ were born in the Soviet-occupied zone of Germany.”

Judt provided no citation for this figure, although admittedly Postwar was meant to be more popular than scholarly. But if one follows Gebhardt’s estimates (according to which roughly 5% of rapes resulted in births) one gets a figure of 3,000,000 rapes at the low end and probably significantly more.

Gebhardt notes a range of complicating elements, including the varieties of sexual violence not involving penetrative sex.

It’s not an unreasonable conclusion. But it does not comport with the commonly accepted narrative in which the troops of the western Allies generally conducted themselves with decorum with respect to the Germans.

Popular culture has conceded that there was widespread looting (think of Major Spiers in Band of Brothers mailing boxes of looted flatware back to the United States) and even that there might have been some off-book shootings.

But the idea that there might have been widespread rape is another matter entirely. The question is why was this not recognised at the time.

Certainly, it was conceded that some rapes had been committed. The criminologist J. Robert Lilly claimed in Taken by Force: Rape and American GIs in Europe during World War II claimed the number to be around 11,000.

But Lilly based his estimate on the number of court proceedings, rather than the number of pregnancies. Although he assumed that only 1 in 20 rapes was reported, this still amounts to a serious undercount.

The reasons for this are similar to those affecting the case on the eastern front.

There were a number of factors militating against the reporting of rapes. These encompass both the disparities of power between the Germans and the Allied occupiers, but also the normal challenges facing victims of rape.

Add to this the fact that even before the end of the war, the Allies were pivoting toward a posture of conflict with their erstwhile colleagues in the Soviet Union.

Whatever their attitudes toward the occupying troops from England, France, and the United States, the vast majority of Germans preferred that to the prospect of living under Stalinism or one of its local cognates.

Germans were also eager to forget and repress their shame in the face of military defeat and occupation. Given these circumstances, the pressure on rape victims to keep quiet was even more immense than normal.

Crimes Unspoken presents a complex and layered account of the varieties of sexual violence perpetrated during the occupation of Germany. This was not merely explicable in terms of the tendency of armies to pillage but related to the nature of the conflict.

Clearly, the use of statistical surmises, even relatively well-grounded ones such as those employed by Gebhardt are subject to vagaries of time, memory, the availability of records, and the difference between statistical regularity and facts on the ground.

Still, it is hard to imagine that Miriam Gebhardt is wrong. More importantly, her reapportioning of the perpetrators destabilises the liberator narrative that helped define American and Russian politics during the Cold War.

It is also worth remembering, particularly in light of attempts by the German far-right to instrumentalise the rapes committed by Allied soldiers, the distinction between those events and the systematic mass murder of racially defined populations by the Nazis.

This is not to say that instances of sexual violence were not atrocious or criminal, only that they were different, and in ways that make such gross and simple-minded equivalences invalid. This is among the most important services that historians can render.