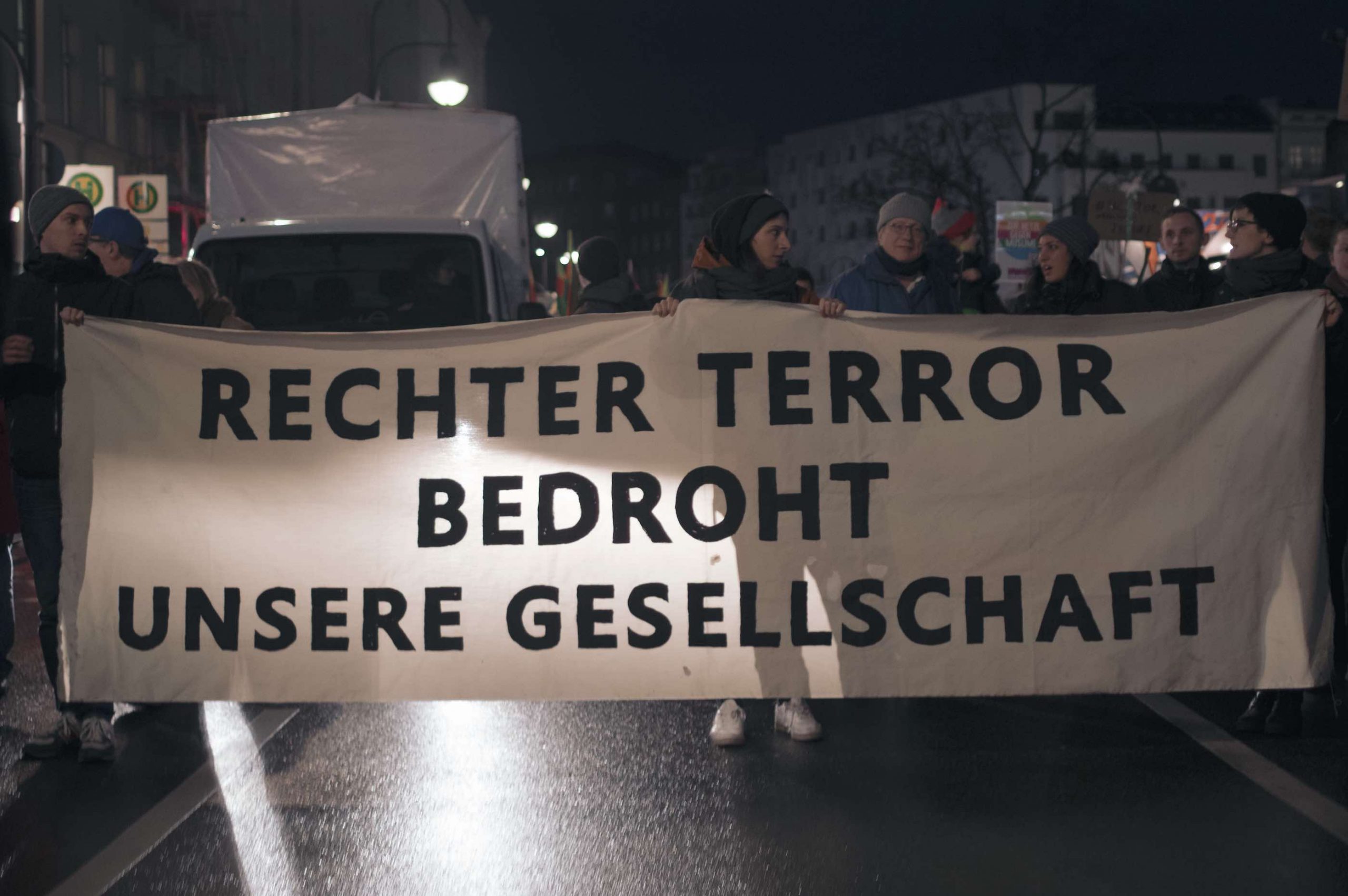 "Our society is threatened by terror." Hanau killings protest, Berlin.

The facts of the Hanau killings are not in dispute: the assailant, 43-year-old Tobias Rathjen, entered a hookah bar on Wednesday night and began firing indiscriminately before shooting several more people at a kiosk.

Rathjen then went home, where he murdered his mother and committed suicide. Altogether, eleven people died, nine of whom had what in Germany is called a “migration background”.

The extremist left behind a 24-page “script” detailing recollections of his life. The text makes two things abundantly clear: he was deeply paranoid and had an extremely racist, sexist worldview.

Beyond that, the details of the text and video messages he left behind reveal a person with a complicated idea of who was persecuting him, but also provide clues as to where some of his ideas may have come from.

In his own words, Tobias Rathjen intended the script to be a “message to the entire German people!” because he believed that “every German must know” what has happened to him over the course of his life.

Rathjen believed that he had been under surveillance and subjected to mind-control since early childhood. He goes so far as to describe a moment when his parents were bathing him when he was an infant and he heard a voice tell him he had fallen into a trap.

His description of that event resounds with a sense of wonder at his own brilliance for being so self-aware at such a young age and, in his telling, represents the beginning of a lifelong feeling of being persecuted.

The killer goes on to describe, among other things, the awareness he developed in early adulthood of his disdain for “the poor behaviour of particular ethnic groups, namely the Turks, Moroccans, Lebanese, Kurds, etc”.

Hence, the diverse identities of Rathjen’s victims. According to German press reports, four ethnic Kurds (also hailed as Turks), a Bosnian, a Bulgarian, an Afghan, a Romanian and a German-Polish-Roma were slain.

Tobias Rathjen’s putative genius (a word that he uses to describe himself) evidently did not help him to conceive of any reason why “Turks and North Africans” would be overrepresented in German prisons other than that they were, he believed, “destructive in every respect”.

His worldview, according to the text, was so extreme that he wrote up a list of countries which “must be completely annihilated”. If one were to visualise that list on a map, it would form a continuous band running from Morocco to Vietnam to the Philippines.

The danger of a person like Rathjen lies in their combination of paranoid delusion, Islamophobia and a generalised hatred of brown peoples. He may very well be an example of a “stochastic terrorist”, someone who commits random acts of violence resulting from indirect incitement.

Based on the theory, if a public figure continuously dehumanises a population and identifies it as a constant threat, that person bears responsibility for violence that displays its influence. Even in the absence of direct orders to commit it.

In Tobias Rathjen’s final video message, which is a bit less than two minutes long and delivered in English, the extremist addresses himself to “all Americans”, warning that, “Your country is under control of invisible, secret societies.”

What do they do, exactly? They operate in “deep, underground military bases” where they sometimes “praise the Devil himself” and “abuse, torture, and kill little children”, he claims.

It is noteworthy that Rathjen directed this at a US-based audience, given that, of all of his outlandish claims, this one might be the most clearly identifiable as American.

Journalist Travis View, who has written about the far-right QAnon conspiracy theory and hosts a podcast dedicated to analyzing it, summarizes it as follows:

Rathjen also claimed that he foresaw a billionaire president who would right the ship of state (though he thought it would be Ross Perot in 1992) and that he described various movie ideas to a friend in 1999 (for example, a Basic Instinct sequel set in London or a television series based on Clint Eastwood’s Escape from Alcatraz) and that they all subsequently came to pass.

All of these ideas, he believed, originated in his own brilliant mind and were put into effect after they were adopted by the secret organisation that had been surveilling him his entire life.

Based on the information that is publicly available at the moment, it is impossible to say with any certainty whether or not Rathjen was a committed, true believer in QAnon. But it seems unlikely that he would have invented a narrative from scratch that is both so outlandish and overlaps so neatly with what QAnon’s supporters believe.

The reactions to the murders in Hanau from various factions of the international far-right have been telling. US-based accelerationists wasted little time in declaring that Tobias Rathjen was the first significant “saint” of 2020, thereby placing him alongside their other heroes who have killed people of colour en masse.

But the German-speaking far right – from the “identitarians” and new rightists to the garden-variety conspiracy theorists – were quick to pounce on two things: his mental illness and the fact that his father was once a low-level Green party politician. Unlike the accelerationists, they have no desire to claim him as one of their own and, on the contrary, would very much like to pin Rathgen’s killings on the left.

Martin Sellner, the public face of Europe’s “identitarian” movement, took to his Telegram account and posted no fewer than seventeen times on the day after Rathjen’s mass killing, only two of which were about topics other than the shooting. His Twitter feed that day was even busier and more chaotic.

Most of Sellner’s commentary focused on the perpetrator’s mental health (“The guy was always psychotic”) and arguing about the finer points of how we might distinguish “terrorism” from a non-ideological killing spree. Sellner places Rathjen’s actions in the latter category.

But Martin Sellner is also a believer in and major public advocate of the idea of “ethnopluralism” which claims that populations must be kept separate on the basis of racial categories.  To be fair, Sellner has publicly stated that, unlike Rathjen, he does not advocate “exterminating” other populations. But that’s an obviously low bar.

Sellner made his name by constantly scapegoating ethnic minorities in Europe and attempting to actively prevent ships from rescuing refugees in the Mediterranean, thereby putting their lives at risk.

The Austrian extremist and his organization, which host an essay titled “Integration and Self-Hatred” on its website, have a vested interest in distancing themselves from Rathjen, who wrote, “very few nations or races stand out as positive. Other races and cultures, on the other hand, have not only made no contribution but are destructive”, lamenting that, “not everyone who has a German passport today is racially pure and worthwhile”.

In his 1964 essay The Paranoid Style in American Politics, historian Richard Hofstadter makes a point of distinguishing between “the paranoid spokesman in politics and the clinical paranoiac”. Hofstadter admits that they both have a tendency to be “overheated, oversuspicious, overaggressive, grandiose, and apocalyptic in expression”.

However, “the clinical paranoid”, he writes, perceives an external conspiracy “directed specifically against him,” whereas the political spokesman “finds it directed against a nation, a culture, a way of life”.

Part of what is so unsettling about Rathjen is that he was always the former, but was finally able to set himself up as the latter as well. Rathjen was, in fact, both a victim – of his own mental illness and of xenophobic charlatans on both sides of the Atlantic – and a vicious perpetrator.

His personal drama is over, but the kinds of people that made his twisted worldview seem worthy of action – the Martin Sellners and the Alex Joneses, the Donald Trumps and the Björn Höckes of the world – show no signs of easing up.

Indeed, there’s no distance between the hatred they promote and the racist violence of murderers like Tobias Rathjen.