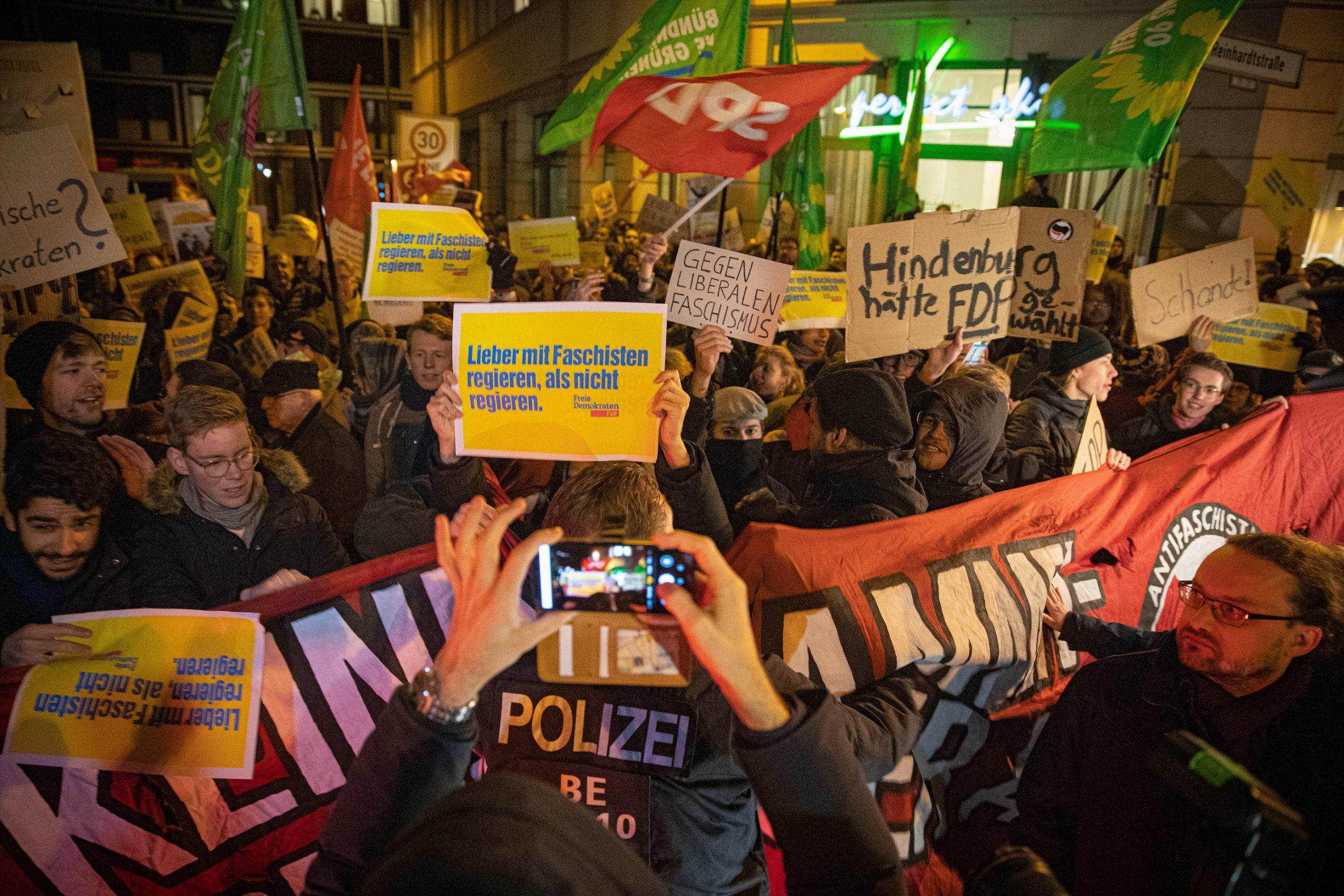 Given the extent of the far-right resurgence in Europe over the last decade, it’s often difficult to predict where the shock waves are going to come next.  On 5 February, it was Thuringia’s turn.

For five years after the 2014 elections, a left-wing majority governed the eastern German state in a three-party coalition. It lost its majority, however, after the Sozialdemokratische Partei Deutschlands (SPD) dropped from twelve seats to eight in statewide elections last October, forcing the state parliament to vote on a new Minister President.

The early favourite was incumbent Die Linke (Left Party) state chair Bodo Ramelow, but he failed to win the necessary absolute majority in the first two rounds of voting.

When the third round went to Thomas Kemmerich, state chair of the liberal centrist Freie Demokratische Partei (FDP), the results clearly indicated that he had won with support from the caucuses of his own party, Chancellor Angela Merkel’s Christlich Demokratische Union (CDU) – and Alternative für Deutschland (AfD), Germany’s largest opposition party.

At the most superficial level, this sounds like a relatively mundane bureaucratic decision. But, given the far-right AfD’s role in making it, alarm bells began ringing immediately and, in all likelihood, will continue to do so for a long time.

Understanding why this outcome was both shocking and viewed as underhanded requires a little bit of background on the applicable parliamentary rules.

In the Thuringian state parliament, winning in the first round of voting for Minister President requires an absolute majority of the votes in a secret ballot election by delegates. If no one wins, a second round repeats this process.

In this case, neither Ramelow nor the only other candidate, an unaffiliated mayor supported by Alternative für Deutschland, had achieved a majority after two rounds of voting.

The Thuringian state constitution stipulates that the third round goes to whichever candidate wins the most votes, regardless of whether or not they have a majority. It’s at this point that FDP leader Kemmerich was put forward as a self-described candidate “against extremes on the right and the left”.

Alternative für Deutschland then ran its candidate for a third time but gave all of their votes to Kemmerich. That is why his election was seen as a sleight of hand and has aroused suspicions of backroom deals with the neo-fascist party.

For some time now, every other major party in Germany, including all of the ones represented in the Thuringian parliament, has formally declared that they will not govern with AfD due to its pronounced xenophobia and its drive to completely alter Germany’s memory culture with respect to the Nazi era.

The situation in Thuringia is not made any simpler by the fact that Alternative für Deutschland’s state party leader is Björn Höcke, who famously decried the Berlin Holocaust memorial as a “monument of shame” in a 2017 speech.

Höcke is also the national leader and public face of his party’s radical ethno-nationalist “Wing” (Der Flügel), an intra-party caucus that the German intelligence service has classified as “suspected” of having right-wing extremist aims.

Due to its pariah status among the other parties, AfD has never been in statewide government in any of Germany’s sixteen states, although several members have become mayors, mostly by joining the party while in office.

That is part of the reason why the 5 February vote in Thuringia was so alarming. Many politicians and commentators saw it as Alternative für Deutschland’s first foray into power at the state level.

After the ballots were counted, SPD state chair Matthias Hey quickly announced that his party would not work with “a Minister President elected by AfD”, while Dirk Adams, leader of Die Grünen (The Greens) in Thuringia, called the vote a “breach of political culture”.

State CDU leader Mike Mohring, who had previously ruled out forming a governing coalition with Die Linke before recanting under pressure from Angela Merkel, restated that Kemmerich had to make it clear that there would be no coalition with Alternative für Deutschland.

Even Kemmerich himself announced on 6 February that his resignation was “unavoidable,” given that AfD had “attempted to harm democracy with a deceitful trick”. He formally submitted his resignation as Minister President of Thuringia on the 8th.

But Alexander Gauland, co-chair of AfD’s caucus in the Bundestag, congratulated Kemmerich on his victory. In doing so, he claimed that “excluding AfD is not working”, thereby all but acknowledging his party’s role in the vote.

There was no shortage of condemnation from the pundit class either. An editorial in the widely circulated Süddeutsche Zeitung called the vote for Kemmerich “a disaster of immeasurable dimensions” and argued that the FDP and CDU had failed to uphold “not only civic values but also those of their voters”.

Meanwhile, broadcaster Norddeutsche Rundfunk (NDR) declared that, “the CDU and FDP were willing to make a deal with AfD” thereby “calling into question the democratic values of freedom, human sympathy, open-mindedness, and freedom of the press and of opinion”.

Apart from the very real possibility of Alternative für Deutschland gaining a direct say in state-level policymaking, the other main reason why this sequence of events has produced such a degree of consternation is that, as many commentators have pointed out, it represents a violation of a taboo on working with far-right parties.

Seventy-five years after the liberation of Auschwitz, the Nazi era remains a very serious and delicate subject in Germany. That also extends to contemporary parties that support policies that come a little too close to Nazi ideology.

When the town council of the Hessian village of Waldsiedlung unanimously voted in a member of the neo-Nazi Nationaldemokratische Partei Deutschlands (NPD) as town administrator last September (including with votes from three SPD councillors), outrage quickly spread around the country and he was voted out again a few weeks later.

But while the NPD is slightly more open about its support for Nazi-era thinking, it is a marginal party with relatively little political support nationwide. Unfortunately, this has not stopped NPD members from engaging in acts of extreme violence.

Alternative für Deutschland, by contrast, is now the second-largest party in at least three states and has a significant presence in the Bundestag. Moreover, its members are regulars on talk shows and other public forums, which gives them a range of opportunities to shape public discourse.

Höcke has also declared that “we will continue to reclaim our country,” another turn of phrase that resonates with the global far-right, as evidenced by the “Reclaim America!” chant used by neo-Nazi organization Patriot Front as it marched through Washington, DC, last Saturday.

Under these conditions, the sense of unease that spreads across Germany every time AfD achieves incremental gains in political power or influence – or any time the political will to keep them in check appears to be eroding – is understandable.

The fallout from Kemmerich’s election has been widespread and varied. CDU party chair Annegret Kramp-Karrenbauer announced her resignation on 10 February in light of her apparent lack of authority in maintaining party discipline with respect to AfD.

The next day, fellow party member Christian Hirte was removed from his position as Federal Commissioner for the New States (an office dedicated to monitoring the integration of the former DDR states into the Republic) due in large part to a tweet he posted congratulating Kemmerich on his victory.

The CDU’s popularity has also suffered: in a survey taken shortly after the vote, only 21.7% of Thuringian voters said that they would vote for the Christian Democrats if state elections were held that week. This marks a decline of thirteen points from the actual election results last October.

On the other hand, that same survey indicated 39% support for Die Linke, which is eight points higher than their share in the October election.

It is difficult to draw definitive conclusions from all of this, as we are largely in uncharted waters for the post-Cold War era.

About all we can say with confidence is that like in many other countries around the world right now, Germany is deeply divided.