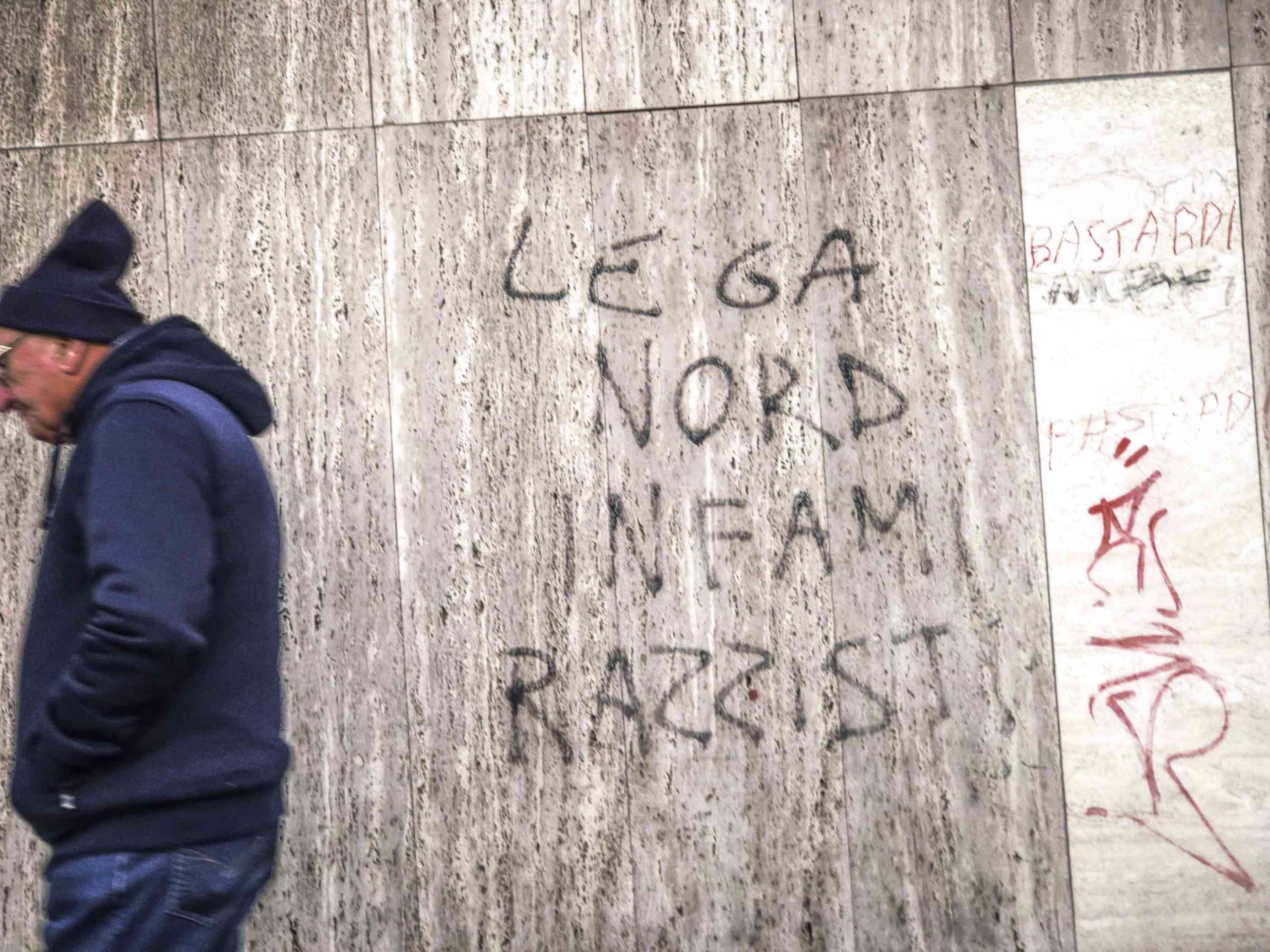 When the Present is the Past

Hitler never pretended to like Jews. His hatred was unambiguous.

Though historians have noted a limited degree of cooperation between German Jews and the dictator during the 1930s, unlike today, there was never a sense that Jews were a tolerated minority, whereas others were not.

But the Nazi genocide had not happened yet, and there was no culture of shame.

Jews, or so today’s populists would have you believe, are the exception.

What is asked of us is trust. That, somehow, we can feel safe in the midst of a culture of hate, which holds us up as a model ethnic group. In spite of the fact that we are increasingly discriminated against.

A perfect example is a racist incident that took place in northern Italy last week. The German words “Juden Hier” (Jews Here) were scrawled on the entrance of a Jewish-owned home, which had been occupied by a famous resistance fighter, who had survived Ravensbrück.

Coming at the height of a racism-heavy provincial election campaign in Emilia Romagna, spearheaded by Lega leader Matteo Salvini, the graffiti was no surprise.

No Italian political leader since Mussolini has promoted as racist a political agenda as Salvini. Centred on Middle Eastern and African migrants, and Roma, the Lega chief has used their examples as a means to burnish his nationalist credentials.

During the course of his campaigning these last two years, first to enter Italy’s last government, and now, to rack up regional electoral victories to return to it, Matteo Salvini has made hate speech a core aspect of his public personality, on social media and in the press.

Unsurprisingly, this has ushered in public expressions of Antisemitism within his party’s ranks. Salvini doesn’t indulge it, personally, but everyone around him does.

Hence, his heavily commented on silence, over the Juden Hier graffiti this last week.

Having led a parliamentary conference on Antisemitism a week ago, in which Matteo Salvini repeatedly equated the racism with hatred of Israel, when it came to condemning such discrimination against Italian Jews, he said nothing.

To analysts of Italian politics, it was unsurprising. In November, Salvini had refused to vote in support of the creation of a parliamentary commission on racism, initiated by Italy’s most famous Holocaust survivor, Liliana Segre.

Holocaust survivor Liliana Segre under guard amid death threats after calling for the establishment of a commission in Italy to combat all forms of racism, anti-Semitism, incitement to hatred and violence on ethnic and religious grounds. https://t.co/kqM3jnUaId

To imagine that the Lega chief’s admiration for Israel promotes tolerance of Italian Jews would be clearly wrong.

Salvini’s behaviour is consistent with the example set by other European extremists. Geert Wilders, Marine Le Pen, Viktor Orbán and Germany’s Alternative für Deutschland all do the same.

Why change tack? It works. Far-right support for Israel helps blunt accusations they’re Antisemitic and racist. It shouldn’t but it does.

Looking over the schedule of a seminar I’ve been invited to speak at later this year, I could not help but discern the effects of such a politics.

As far as Antisemitism is concerned, I’ve always gone on record as saying that far-right hate is more common than its Islamist version. In Germany, in particular, the data repeatedly bears itself out.

According to a report in Tagesschau, published the day before this year’s Holocaust remembrance day, Antisemitic crimes rose 20 per cent in 2019. The previous year’s overall number was 1799. Only 8.5 per cent were said to be religious in origin, meaning Islamist and one per cent left-wing. 90 per cent were perpetrated by far-right extremists.

Why then, do we insist on repeating the propaganda of Europe’s far-right, within the Jewish community, when it’s a lie?

To a certain extent, its because we’re scared. 75 years after the Holocaust, the Europe we live in still feels tentative, as though at any minute, the Shoah could happen all over again.

It may very well not, but the intensity of the hatred Jews and other minorities experience here is truly frightening. Hence, the Tagesschau numbers.

Pick up any tabloid in Germany, or watch any news program on TV and the us-versus-them framing of German and Muslim cultures is something Jews do not miss.

We are sensitive to any and all things like this. A history of racism has made us acutely aware of how minorities get marginalised in European politics and media.

One of the reasons a part of our community may lean to the right in this regard, and replicate the Islamophobia of ethnic Germans, is, in my view, a reflection of this. It’s culturally routinised.

German Jews aren’t the first to do this and definitely won’t be the last. The experience of racism in the Diaspora is common enough and this sort of response is replicated across Europe.

But, as an Israeli national what worries me is that it influences how European Jews relate to Israel and the ongoing crises between Jews and Palestinians.

Fear of Muslim hatred in Europe should not influence their understanding of Israeli politics, or provide a pretext for taking precautions against Arabs and Muslims in the Diaspora.

Though Israel was founded in response to European Antisemitism, it is important for us to remember that the hatred is still primarily a European phenomenon.

Today’s racism, in Europe, may be increasingly Antisemitic, but it is still primarily focused on Muslims. Its intention, at least rhetorically, is to cleanse Europe of Islam.

Though European fascists may target Jews, striking fear into our hearts and attacking our religious institutions, we are secondary players in this drama, this time.

The Antisemitism we are subject to is a byproduct of Islamophobia. And, most importantly, serves as the basis for it. However it reaches us, it’s inescapable.

The importance attached to Israel in this is simply that its ethnic divisions are appealed to in order to justify European rejections of Islam and migrants.

That’s why it is so easy for populists to proclaim their love for Israel and make it synonymous with Judaism, and at the same time remain hardcore Antisemites.

This is a different account of the European right’s pro-Israel politics than is normally offered. But it is fairly obvious to someone who is Jewish and who lives in Germany.

Having grown up in the shadow of the Holocaust, with older, WWII generation parents (My mother and father were middle-aged when I was born) I’ve always been sensitive to Holocaust trauma.

They were incredibly reactive to anything smacking of Antisemitism and were always keen to remind me to be compassionate towards other Jews. Hitler had hurt all of us and we all had to play armchair psychologist at times.

But it was also wrapped up with the early years of Israel’s formation and it was always clear that their politics were unfairly influenced by the Nazi genocide.

There were the obvious excesses, particularly in matters concerning Palestinians and Arabs and it was impossible to disentangle WWII from that.

Now my parents’ age, when I was born, I find myself clearer than ever about their conflicts. The historical distance helps.

That’s why for me, whether its Muslims in Europe or the Arab-Israeli conflict, the biggest enemies remain the Nazis and their descendants.

As per the example of the Juden Hier graffiti and Matteo Salvini, one would be hard-pressed to imagine any of this without them.

Hence, the use of the German language, to discriminate against Jews in Italy, 75 years later.