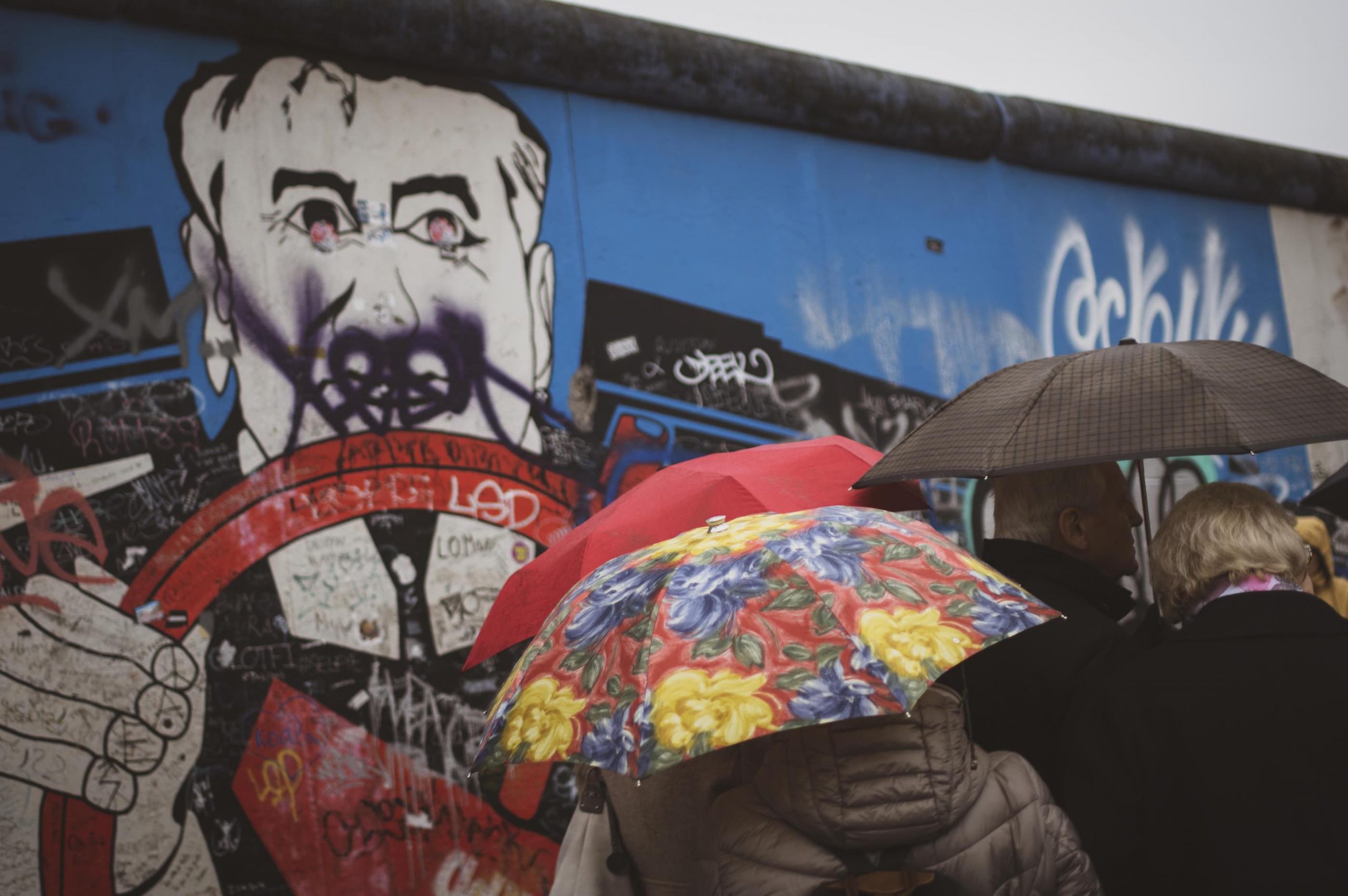 The father of reunification. Mikhail Gorbachev, East Side Gallery.

Hope Harrison’s After the Berlin Wall

Memory is one of the most important elements of modern societies. Nowhere has its centrality been so fully illustrated than in Germany.

As the stage for the leading political pathologies of the 20th century, Germany is the textbook case for the power of memory, both in processes of reconciliation and in their disruption.

The Berlin Wall constitutes a special case. The Wall was an act of violence perpetrated against a city, an assault on the landscape rather than solely on the bodies of the people inhabiting it (or attempting to traverse it).

As Hope Harrison shows in After the Berlin Wall, the work of coming to terms with it has run like a thread through the three decades of reunified Germany.

By the time the Deutsche Demokratische Republik (DDR) collapsed, Germany already had a complex relationship to its history. Remembrance of National Socialism and the Holocaust was suppressed on both sides of the Cold War divide.

In the Allied zones of occupation, the end of the war saw a pivot towards the struggle against communism. In the immediate postwar years, there was little in terms of serious attempts to memorialise the Holocaust.

Survey data from the 1950s suggested that a significant proportion of adults in West Germany viewed National Socialism as a good idea which had simply been poorly executed (so to speak).

It was not until the 1960s that the painful questions of the Nazi past began to come into focus.

The Frankfurt Auschwitz trial from 1963 to 1965 and the coming of age of the post-war generation caused questions to be asked that had mostly been ignored or suppressed during the Adenauer era.

On the eastern side of the Cold War divide the narrative was one of victimisation. The German Democratic Republic was the state of the people victimised by Nazism, i.e. communists.

One can still encounter this in the Soviet-era war memorials in Berlin’s Treptower Park, which make no references to the fact that Jews were in any way central targets of Nazi genocide.

It was not at all coincidental that the official term for the Wall in the lexicon of the DDR was the antifaschistischer Schutzmauer (antifascist defence wall).

The collapse of the Deutsche Demokratische Republik was unique in communist transitions.

In Russia and most other Eastern European communist states, the transition was a matter of power being taken, whether peacefully or otherwise, by dissidents or those otherwise excluded from power during the era of party domination.

The DDR never had a dissident movement on the model of those in Czechoslovakia or Poland. The punk rockers and peace activists who have recently received well-deserved recognition for their role in hastening the demise of the GDR (for instance in Tim Mohr’s Burning Down the Haus) only coalesced relatively close to the end of the process.

The process of German reunification was a matter of the moribund East German state being colonised by West Germany.

It would later become clear that that process of colonisation was not entirely successful, as the social and economic problems afflicting the so-called Neue Bundesländer to this day illustrate.

Even at that, the end of the Deutsche Demokratische Republik happened at the end of the Cold War, not its beginning, as the end of National Socialism had. There was thus no convenient point of deflection to take attention away from the crimes and injustices of communism.

Hope Harrison shows the complex ways that the Berlin Wall became an element of the process of working through the communist past.

Dozens of people had been killed in attempts to flee over the Wall. In several notorious cases, people shot by border guards had simply been allowed to bleed to death after being wounded.

The project of identifying perpetrators of these crimes and establishing the legal basis for trying them was one of the key early moments in coming to terms with communist past.

Harrison also traces in minute detail the struggles over physical preservation of the segments of the Berlin Wall itself.

It should come as no surprise that, in the immediate aftermath of the collapse of the DDR there was strong sentiment among Berliners for completely eliminating the symbol of communist repression that had disfigured their city since 1961.

There was also a segment of opinion (very much in the minority) that believed preservation of at least some part of the Wall in its original form and location would be an important part of honouring the memory of its victims.

The conflict between these two impulses was fought out in the Bernauer Strasse, a rather out of the way corner of Mitte where the Berlin Wall had sealed off one side of the street from the other.

Bernauer had been the site of an Imperial-era church (the Church of Reconciliation) which had fallen in the security area on the East German side of the Wall, while its administrators remained on the West German side. In 1985 it was spectacularly demolished by the communist government.

In the wake of the fall of the Berlin Wall, Manfred Fischer, who had headed the church community since the early 1960s, sought to make Bernauer Strasse the site of a memorial, involving both segment of the Wall and an interpretive centre.

In this, he was strongly opposed by local residents, including officials from two other churches with property in the area, who wanted nothing less than the complete extirpation of the Wall.

Fischer’s project received support from the CDU mayor of Berlin because he worried about the rising power of the Party of Democratic Socialism (the rejigged version of the East German Communist Party).

Commemorations of the fall of the Berlin Wall, occurring at ten-year intervals, offer windows into the transformation of politics in post-Cold War Germany. At each point they have served as platforms for political education, with the Cold War used to illustrate the unfortunate consequences of division more generally.

More recent celebrations of the fall of the Wall have come to be occasions for self-congratulation at Germany’s overcoming of communist repression.

This “happy history” stands in stark contrast both to the memory of the end of National Socialism (which was only ended by invasion and complete collapse) as well as to the earlier memories of the defeat of communism, which were more sombre at the beginning.

Hope Harrison’s book highlights a number of interesting features of German memorial culture, not the least of which being the increasingly instrumental character of invocations of the end of communism.

This is of a piece with the generally more positive attitude towards overt expressions of nationalism, from those directed at the national soccer team to the rise of far-right parties and movements such as Alternative für Deutschland (AfD) and PEGIDA.

The question of Germany’s self-image is now no less fraught than it has been for much of the last century. It remains an open question as to whether, or to what degree, the increasing feel-good factor in German historical commemorations has allowed xenophobes like the AfD to thrive.

But, it’s inarguable that the transformation of the Berlin Wall from a tragedy to an occasion for national celebration has made calls for a return to German greatness the new norm.

After the Berlin Wall makes a timely and important contribution to the literature tracking this change.