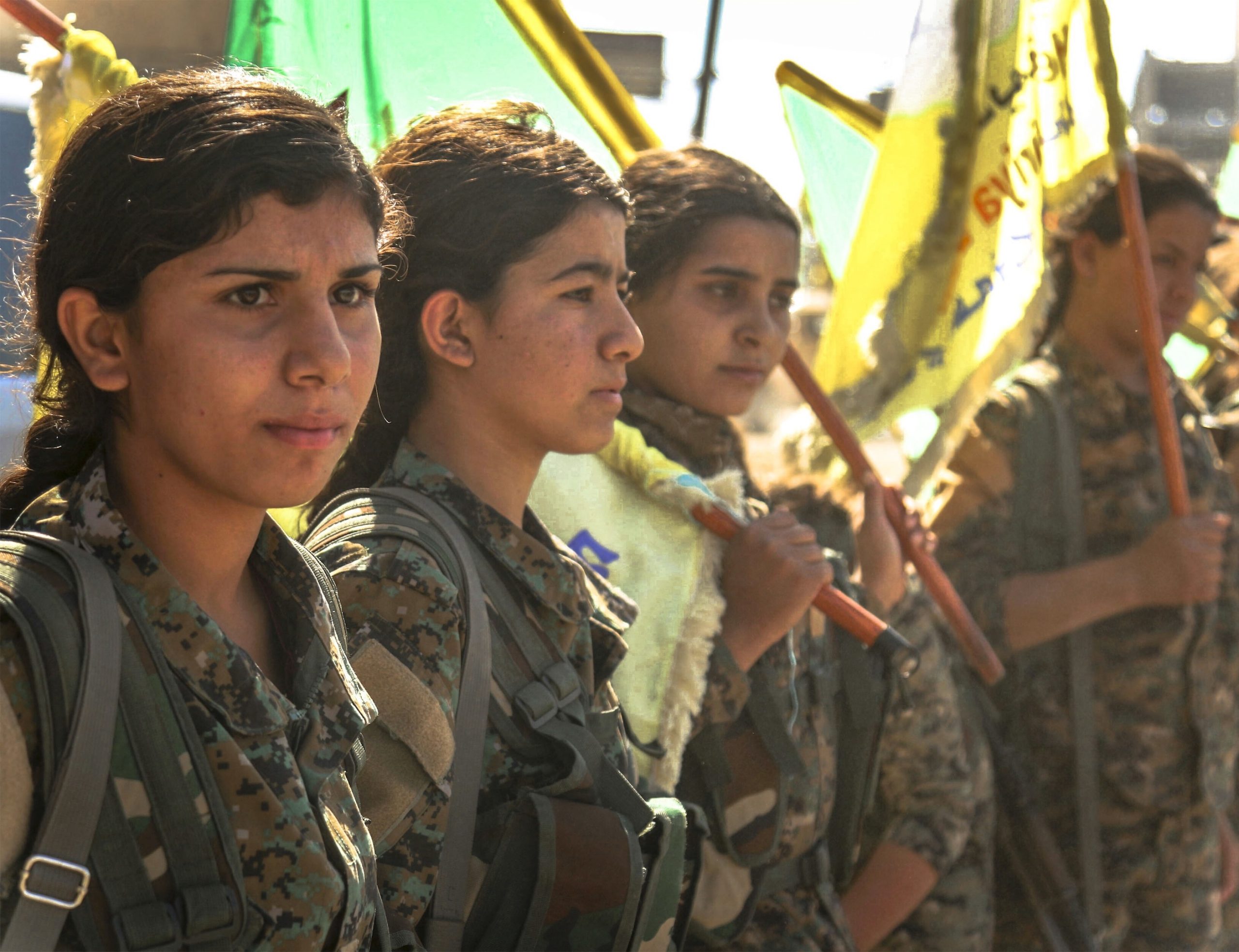 Playing for the Troops

As far as band names go, Adrestia couldn’t be better. The goddess of revolt in Greek mythology, it’s astonishing no one used it until now. Leave it to a political punk group from Sweden, with a fondness for vintage death metal, to seize the day.

Like many European underground artists of their generation, Adrestia supports the Kurdish struggle for autonomy in northeastern Syria. Otherwise known as Rojava, the territory has been repeatedly in the news since January 2015, following the defeat of ISIS in the border town of Kobane, facing Turkey.

A combined US-Kurdish effort, the victory represented the beginning of the People’s Protection Units (commonly referred to as the YPG) collaboration with Washington to route Islamic State. By 2017, the effort had largely created a Kurdish mini-state along the border, drawing repeat threats of invasion from Turkish President Recep Tayyip Erdoğan.

Contending that the United States had effectively aided Turkey’s arch-enemy, the Marxist-Leninist PKK, which has been fighting the Turkish government since the early 1980s, Erdoğan made good on his threats, first seizing the Kurdish city of Afrin in January 2018, and then launching a broader invasion in October 2019, designed to create a buffer zone along the border, where it could resettle the 4 million Syrian refugees currently hosted by Turkey.

The results have been devastating for the region’s Kurds, turning hundreds of thousands into refugees, and putting the future of Rojava into doubt. While the United States could have been more supportive of its Kurdish allies, it hasn’t given up on them entirely.  The US military is highly sympathetic to the Kurds, considering them their most effective regional allies, and has regrouped with their forces further south, away from the Turkish border.

In the interim, European bands like Adrestia continue to go the extra mile to highlight the significance of the Kurdish region under threat. A political experiment the likes of which the Middle East has never seen, the attraction is obvious. Trafficking in most, if not all of the traditional political concerns of Western progressivism, Rojava is a utopia in the making that stands on its own in a Western context.

The Battleground’s John Foster spoke to Adrestia vocalist Martin Shukevich about what it is that makes the contested Syrian region so special. Shukevich gives Foster a PhD on the subject, in return.

John Foster (JF): I first heard about Adrestia when you put out the In Solidarity with Rojava split with Martyrdöd. How did that happen?

Martin Shukevich (MS): Both bands had members who were following the developments in Rojava quite intensively, so it felt quite natural to do something together. We knew that we wanted to contribute to the revolution in Rojava somehow.

JF: What drew you to Rojava as a political issue?

MS: For me, it all began in 2014 when I started to read about the siege of Kobane. I reacted to the fact that a lot of the photos depicting the defenders of the city (which was by then under attack by Islamic State) were women. I thought it looked interesting, so I started to read more about the battle itself, but also about the people who fought ISIS.

What struck me, in the beginning, was that ISIS was heavily equipped with the guns and the tanks that they took from the Iraqi army in Mosul a couple of months earlier, while the YPG/YPJ fought back mostly with the help of old weapons, and without tanks or any other heavy armoured vehicles.

The battle was interesting in itself of course, especially when it became clear that Turkey was on the Islamic State’s side. But what really caught my attention and made me determined to do what I could to help out was the ideology on which Rojava is built.

JF: How do you see it as different from other states or organisations?

There are of course organisations with ideas and structures that resemble those of the different organizations and bodies within the society in Rojava. The PKK, for example, practices the same ideology, and there are a couple of other political parties and organisations in the Kurd-dominated areas of that region sharing the same ideas.

Recently I’ve seen reports about organizations in Latin America embracing the same ideology, which is a very positive development. Apart from that, and apart from the similarities with anarcho-syndicalist organizations, I’d say there are few organizations like those in Rojava. I guess that’s mainly due to the fact that Democratic Confederalism is a relatively new ideology, and that it was formulated in the context of that region.

Therefore it might need to be adjusted a bit to different cultural and political contexts in other parts of the world before being implemented there.

JF: What is Democratic Confederalism? How does it work?

MS: There are three pillars:

Democracy, meaning direct democracy where those affected by decisions are also the ones making the decisions.

Women’s rights. This pillar has been a high priority for the movement for a long time. Even in the first years of the PKK, it was clear that they prioritized the rights of the women in a way that no similar organization did.

In Rojava, this issue has the highest priority. We can see that clearly if we look at the structure of their society, since in every important position of society there is one woman and one man sharing the work and the responsibilities.

We can also see it if we look at the society charter, which is Rojava’s equivalent to a law book. It says that no decisions can be made unless at least 50% of those voting on the decision are women.

Women have parallel organizations on all levels of society. Oppressive cultural and political traditions like child marriage and domestic violence are strictly prohibited.

Ecology and ecological sustainability is the third pillar. Here it must be said that the situation in Rojava, with a war going on, and with the Turkish blockade, has made it hard for the society to be as progressive as it wants to be when it comes to sustainability.

In practice, society in Rojava is organised from the bottom and up, like a pyramid turned upside down. The smallest element of society is the commune (not to be confused with communes in the western world). In Rojava, a commune consists of 300-400 people. It could be several blocks in a town or a village.

In the commune, the people vote on decisions that directly affect them. 50 per cent of the voters need to be women, otherwise, the decision is not valid.

All these communes have representatives that they can send to the next level of society if the questions addressed cannot be solved within the commune, or if the decisions affect people outside of the commune.

Democratic Confederalism rejects the notion of nation-states completely. The goal is not to create an independent state in northern Syria, but rather to include as many regions and people as possible into this system.

Throughout the war in Syria, this policy has by time been proven effective, as the YPG/YPJ has been taking lots of territory mainly from ISIS. Many of the people who are living in these now liberated territories are not Kurds, but they have chosen to be part of this system anyway.

JF: Do you think there is a possibility of a European version of this? Can this approach combat the rise of right-wing extremism?

MS: I would like to see something like it happening, but I have a hard time seeing it coming for a lot of different reasons.

First, people within the European left are unfortunately too busy fighting each other rather than ideas on the opposite side of the spectrum. Second, polarization within European societies, which is getting worse over time, mainly due to the rise of populist right-wing parties, makes it hard to mobilise people in the way that they’ve been mobilised in Rojava.

One thing is for sure. The political structure within Democratic Confederalism, where democracy is built on a grassroots level, from the bottom and up, is almost the opposite of the society we live in. If people got the chance to participate in such a system, to feel that their voices mattered and that they’re being listened to, the way they think and act would change as well.

JF: What is Punks for Rojava? How have you been active in it?

MS: Punks for Rojava is a network of punks and bands worldwide, created with the sole purpose of supporting the society in Rojava and to spread awareness about what’s going on there.

It took a while, but now it seems that the network is growing, and there are benefit shows in many different countries in Europe, and also recently in North America. It started with that split EP we made with Martyrdöd and the benefit shows that we organized in Sweden. Now there are people all over the globe picking up the concept and taking it further, which is something that I’m really happy to see.

In my mind, being a punk/anarchist/activist without caring about Rojava would be complete hypocrisy. Punk bands have been singing about revolutions and societies like the one in Rojava for 40 years now. Since the revolution is here, make sure to support it!

I wrote a quite long article about Rojava and Punks For Rojava for diyconspiracy.net a few weeks ago. If anyone is interested, they should read it.