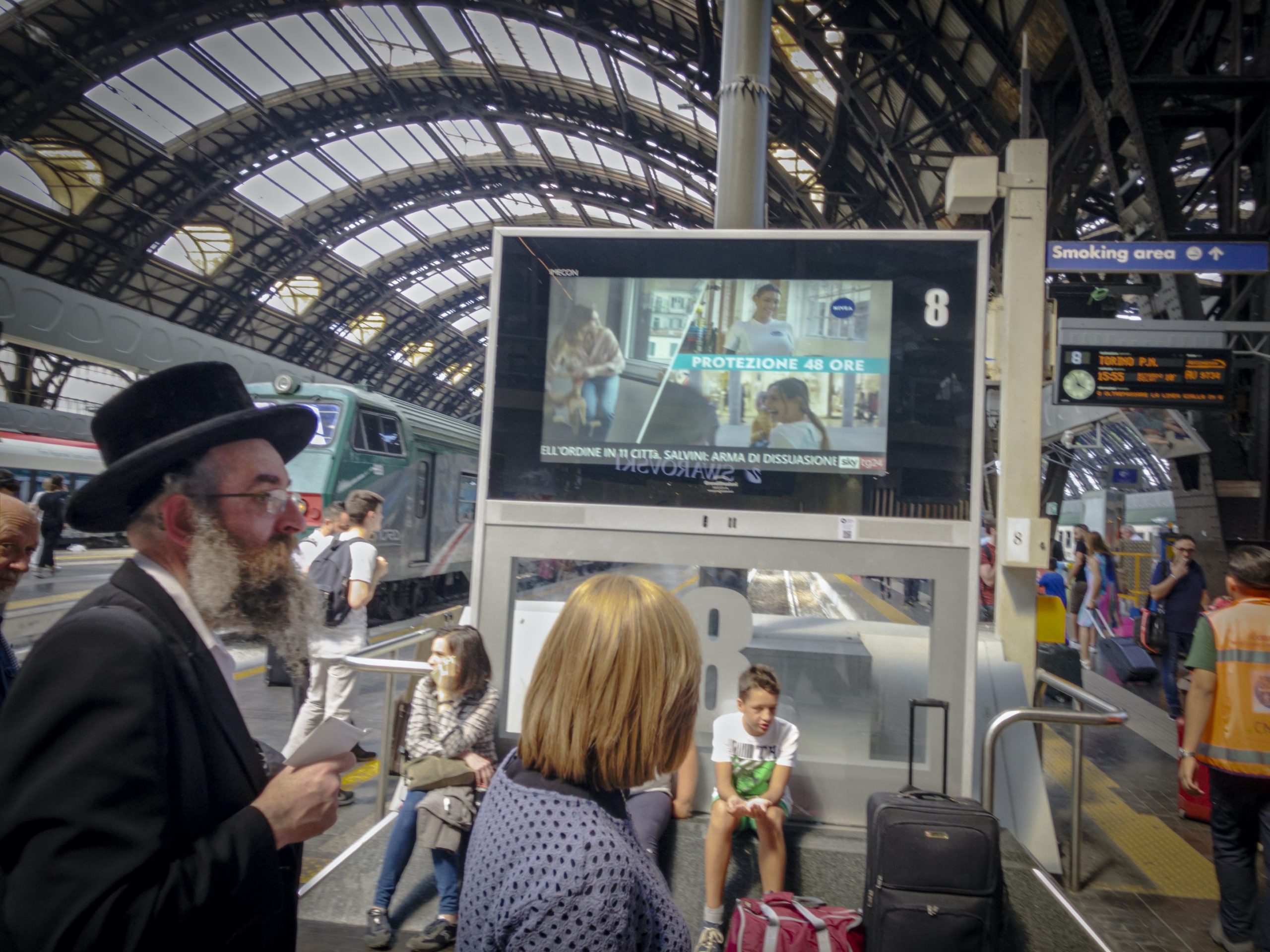 They once left for Auschwitz from here. Milano Centrale, July 2019.

Imagining a Europe Made Whole

Perhaps it is a sign of the wounds inflicted by National Socialism that so much speculative fiction has been written exploring how things might have turned out differently.

From Philip K. Dick’s stage-setter The Man in the High Castle  (1962) to Philip Roth’s The Plot Against America (2004), novelists have been drawn to the question of how the world might have turned out if the struggle against fascism had not been brought to a successful conclusion in 1945.

Simone Zelitsch’s Judenstaat takes a slightly different tack, one more akin to Michael Chabon’s The Yiddish Policeman’s Union (2007), in which a post-war Jewish state was set up somewhere besides Palestine.

Chabon’s book finds the Jewish state in Alaska, making it in certain respects commensurate with locating it in the Levant (or in Madagascar as the Nazis had at one point planned to do).

This is, of course, not intended as a criticism of Chabon’s entertaining and well-executed novel. It is, rather, only to note that the displacement of Jewish people (and thereby Jewish influence) from Europe was a desire commonly held by those whose Antisemitic views did not descend to the level of the homicidal.

Zelitsch’s book, bearing a title referencing Theodor Herzl’s seminal Zionist 1896 pamphlet Der Judenstaat, which envisions a Jewish state in Palestine, asks a different question: what might have become of the Jewish state if it had not been part of a process of spatial distantiation.

Instead of the Middle East, Judenstaat recounts Israel’s founding in the eastern German state of Saxony, at the end of the Second World War. The idea is to explore what Jewish national experience might have been like, within the European project, if it had not been forced into exile by Antisemitism.

The story centres on Judit Klemmer, a Jewish filmmaker working on a documentary celebrating the foundation of the Jewish state. Her husband, a prominent orchestra conductor, had been murdered years before, ostensibly by a fellow Saxon. Much of Judenstaat’s narrative arc centres on Judit’s uncovering of grim events at the state’s founding during her search for the truth about her husband’s death.

The German setting of the story makes it possible to understand critical parts of Jewish history in a new light. Not least among them is the role of the Saxon minority in the newly founded Jewish homeland.

The crisis of the Palestinians has been a defining feature of Zionism since the 19th Century. Judenstaat implicitly asks what the status of a non-Jewish minority might have been had Israel been founded in Europe and had a different minority to contend with, in a context absent colonialism.

The question of whether the Saxons actually constitute a “people” (for some value of that term) is crucial for a state in which another people (i.e. Jews) is the majority.

For those who think this question irrelevant or arcane, one might recall the riot that kicked off in Dresden a few years ago between fans of Union Berlin and Dynamo Dresden when the fans of the former chanted “Deutschland den Deutschen, Sachsen Raus!” (“Germany for the Germans, Saxons out!”) toward fans of the latter.

The broader historical canvas of Judenstaat is formed by the following historical counterfactual: what if the dominant force in Jewish national life was not an outgrowth of Herzl’s Zionism, but rather the heritage of the Bund, the Jewish socialist organization that thrived in the Russia, Poland, and Lithuania between 1897 and 1920?

In this version of the Jewish state, the socialism and cosmopolitanism for which the Jews were criticised (most lethally by the Nazis but by others as well) have become positive, defining qualities of the new nation. But the Jewish state is also engaged in dangerous ways with the Soviet Union, and Zelitsch presents it as comprising elements of the East German security state as well.

Without giving away too much of the plot to those who have not read the book, a further central difference between Israel and the Judenstaat is the first generation of its leadership.

Much of Judenstaat deals with the loss of innocence associated with Israel’s founding, and how the legacies of politicians such as David Ben Gurion, Chaim Weizmann and Golda Meir might be more critically accounted for in a leftist Jewish state in Europe.

Some parallels with Israel are less ideological and probing of internal intercommunal Jewish differences.

Thus, at a certain point in the novel, Klemmer goes in search of information to a town populated by ultra-orthodox Jews. This area is, as it turns out, autonomous in many respects, even falling outside the purview of the Judenstaat version of the Stasi.

Judenstaat reads like a mystery novel, written in sometimes dense, sometimes fragmentary sections through which the reader puzzles together both the story and its background. But it is arguable that the book has a broader agenda or, at least, raises more profound questions than simply those investigated by Judit Klemmer.

There is a view, common to many Antisemites, as well as to those of more extreme Zionist persuasion, that there was never a true fusion between Jewish and European cultures. This is one of the great tragedies of the 20th century.

To take only one example, such views devalue the profound richness of the Yiddish culture that spread across Central and Eastern Europe, and a language that fused Hebrew, Farsi, German and Slavic languages into an indigenous European idiom. The success of the Nazis in wiping out Yiddishkeit was a self-fulfilling prophecy of Jewish separateness and a core feature of Hitler’s genocide.

Zelitsch’s novel has unavoidable tragic elements, but it also presents an alternative utopia. Judenstaat is a vision of a united Europe as it might have been: one not free of conflict but in which a place could be found for Jewishness in the bosom of the region in which it had found its greatest modern flowering.

In Judenstaat, the crucial influence of Felix Mendelsohn is noted, and one is left to wonder what might have been the influence of a state that could have counted such bright lights in the European firmament as Heinrich Heine, Franz Rosenzweig, Theodor Adorno, and others far too numerous to name.

Speculative fiction of this kind has a power over and above the telling of a story. It can, in ideal terms, open up a world, for good or ill. The world of Judenstaat is perhaps not ideal. But it is real and puts before the reader an alternative way of healing the wounds of the National Socialist era.

Judenstaat allows us to imagine a different Europe, a better one in which cultural homogeneity is giving way to diversity, in a new kind of national space.