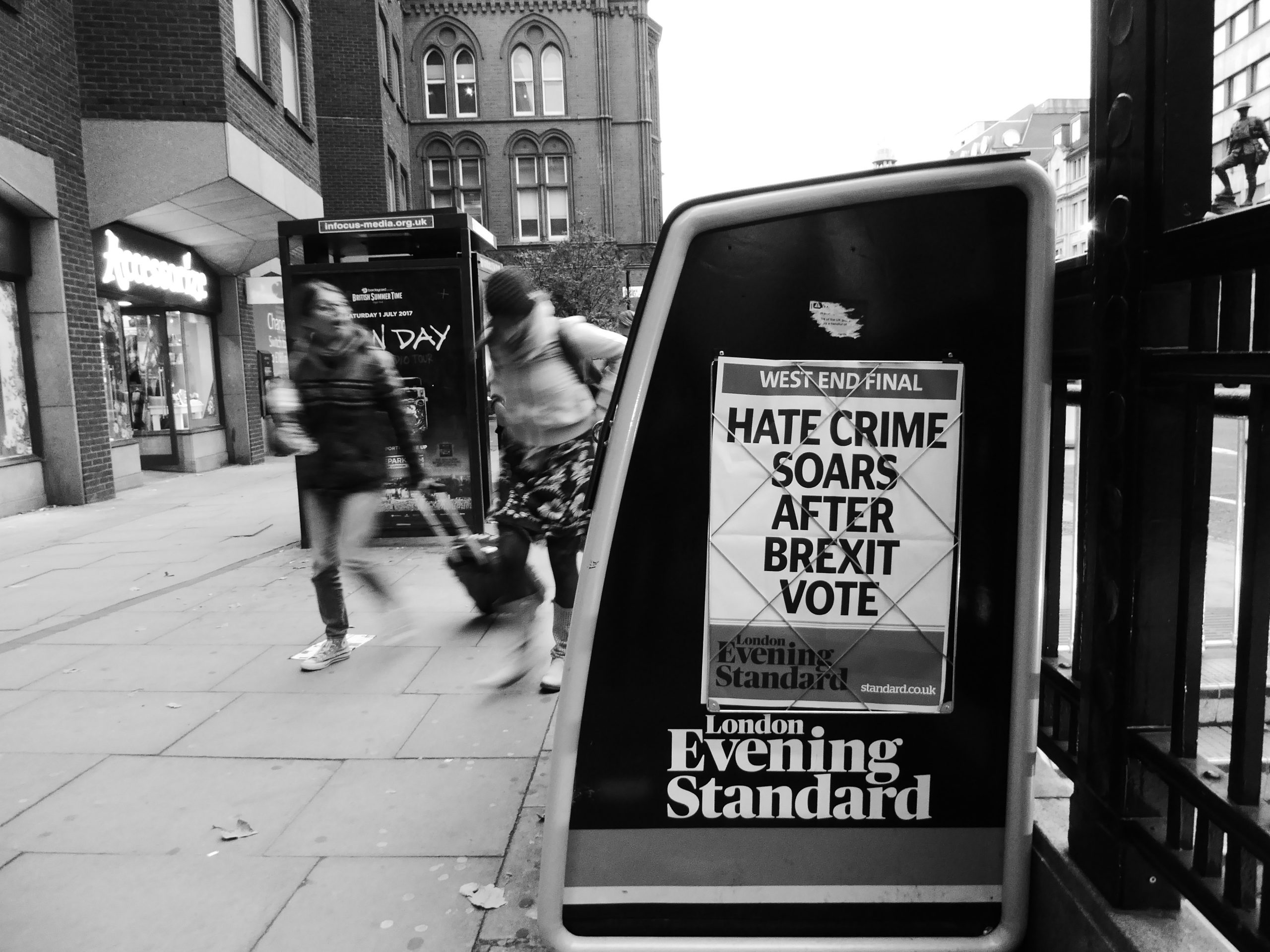 The press has nothing to do with it. London, October 2016.

When the history of Brexit is written, the chapter on propaganda will be the biggest. From the slogans and disinformation to the tabloid headlines, it could be its own book, really.

After all, wherever we turn, the government is telling us to “Get Ready for Brexit.”  Whether it’s the BBC or ITV, or Twitter, someone is always there to remind us of our duty.

Yet, during an election campaign, in the 5th wealthiest country in the world, a backdrop of growing homelessness and skyrocketing child poverty complicates the picture.

You would think that in such circumstances, the Brexit clarion call would ring hollow by now. That the now-three-and-a-half-year process has made things worse, not better. But you would be wrong.

We are a nation that has been softened up, inured to the pain of those less fortunate than ourselves by a constant blaming of others for our misfortunes: the EU, the elite, the establishment, migrants, benefit claimants, anyone except those actually in government with the power to improve people’s lives.

Yet, we are also fortunate to have activists and campaigners who highlight the injustices.

Take Led by Donkeys, the group of dads who have exposed politicians’ lies on advertising billboards, buildings and beaches.

But are such groups getting through? And are people really listening?

No doubt, historians will point to precedents, literary types will reference George Orwell, the left will blame the far-right, educators the lack of literacy, economists will say it was austerity, and some will blame immigration.

To a certain extent, they may all be correct.

As publisher of a new periodical set up precisely to fight false narratives, I’d like to document what’s going on in the media.

While we’re in the last frenzied day of the election campaign. Before our energies fade and we struggle to remember what happened and why.

Politics and the Media

The great British press and the world-renowned British Broadcasting Corporation have failed in their duty to hold truth to power.

Over the last decade, offshore billionaire owners of Britain’s media, and their friends in the governing Conservative Party have muzzled it.

There are some notable exceptions: Channel 4 News has taken a pugnacious approach to holding Boris Johnson’s mendacious government to account. Individual journalists like Peter Oborne have felt compelled to call their profession out, risking isolation and the cold shoulder of colleagues.

But there are far too many reporters who have lost their bearings, tying their colours to the masts of sinking ships like The Telegraph and The Daily Mail, cosying up to politicians in return for access, crossing the line between reportage and bias on social media. Or simply eschewing basic professional standards.

There is a revolving door between media and the government: Boris Johnson simultaneously running his leadership campaign whilst writing headline articles for The Telegraph, George Osborne stepping straight out of the Treasury to the editor’s job at the Evening Standard, BBC editors hired into No 10 Downing Street to run the government’s media campaigns.

Then there are the Tory Westminster wives and girlfriends or ‘TWAGs’, as The Telegraph has dubbed them: Sarah Vine (wife of de-facto Deputy Prime Minister Michael Gove) at the Daily Mail, Mary Wakefield (wife of Vote Leave’s and now No 10 communications advisor Dominic Cummings) at The Spectator, and publicist Carrie Symonds (the latest partner of Boris Johnson) serving as the director of communications for the Conservative Party, who use their professional roles and personal proximity to promote the government’s narrative, without the scrutiny that comes with being a politician in office.

And let’s not forget some of the self-professed supporters of Boris and Brexit,  journalist Allison Pearson (The Telegraph), LBC commentator Julia Hartley-Brewer, Times journalist Tim Shipman (recently of “Boris’s post-Brexit bonking bonanza” fame) who have rallied to amplify Boris Johnson’s Brexit soundbites and rush to defend him from his detractors. The examples are too many to list here.

In tomorrow’s Sunday Times, an interview with Boris Johnson in which he predicts a post Brexit bonking bonanza which leads to a 2012-style baby boom 💥

In this febrile atmosphere, the scrutiny of a 5-week general election campaign is a welcome respite in a period in which UK media coverage has been relentlessly biased towards the right.  For a brief period, election laws apply equal airtime and treatment to the main parties, their leaders and their policies.

This enables an equal light to be shone on the people and personalities asking for our votes. Or at least it would if the prime minister of the day showed up for leaders interviews and climate debates – something that Boris Johnson has failed to do – gambling that no interview is better than a bad interview, to edit a Brexit slogan from his predecessor.

Johnson prefers instead a critic-free zone in which to make controlled clips for social media, supported by the Vote Leave crew now at the heart of government disseminating shameless disinformation using the latest targeting techniques.

And then there are those Russians, used variously to point to a national security risk.  On the one hand, purportedly responsible for leaking a government document detailing secret US-UK trade talks on the NHS. On the other hand, according to a suppressed intelligence services report, responsible for influencing UK politics through funding the Conservative Party.

Anyone wanting to understand the influence of Putin on our politics need look no further. Except they can’t, because the prime minister has refused to publish the report until after the election.

If that doesn’t constitute a national security risk I don’t know what does.

Iced Brexit doughnuts for the Jewish community, Bollywood-style video with a turban-clad Johnson for the Indian community, a football pitches promise for the masses and an early morning photo opportunity on the docks of the UK’s most maligned fishing town (my own).

What could possibly go wrong with these controlled media events? Well, much to the credit of a few plucky journalists, and principled sports commentators, quite a bit.

If you don’t want to be called out on racism by one of the UK’s former top footballers, best not to write racist comments in national newspapers, or give a stump speech vilifying EU nationals for making the UK their home.

If you don’t want to be called out for your party closing down youth clubs and selling off school sports fields, best not to promote your football bribe at a centre for disadvantaged children.

Last but probably not least, when a journalist presents you with photographic evidence of a sick four-year-old sleeping on the floor of an NHS hospital, best not to pocket his phone and pretend it’s not happening.

Despite these sometimes amusing campaign gaffes, there is actually a serious point here.

Treating people like fools by claiming the opposite of reality is true is a dangerous game. It confuses the electorate, polarises opinion and ultimately destroys trust.

Not just in politicians, or the media, but in our ability to effect change. It disorientates, demotivates and sets up an abusive relationship between politician and voter.

Messing with the nation’s mind is truly the behaviour of a sociopath.

Equally worrying, Johnson’s public threat to the BBC’s funding model on arguably his worst news day in the election campaign, shows the premier taking aim at the very institution that has until now shown an unconscious bias towards government.

The good news is that faced with an existential threat, the BBC appears to be fighting back.

Witness senior journalist Andrew Neil holding up the prime minister’s record on trust in view of his failure to present for interview, Nick Robinson finally calling out Boris Johnson’s lies on BBC Radio 4 Today, and Hugh Grant’s interview on the same programme pointing out that in Johnson’s video (copied from a Labour MP) the sign from the film Love Actually that he didn’t hold up was “Because at Christmas you tell the truth.”

With the spirit of Christmas upon us, we can but hope that the British electorate will resist the lies and vote for a more honest politics in which politicians genuinely serve the people, not vice versa.

If that is the case, we will see the British traditions of debate and democracy live to fight another day.

If the vote is for the alternative (facts), as prompted by Lord Sugar of The Apprentice on the front page of The Sun newspaper this week, then we will see the reality TV-style of politics take hold in the UK that has ushered in an era of catastrophic decline in trust and ethics in the United States.

Whatever the outcome, those who believe that politicians should be held to account by an independent media will continue to resist the virulent populism that has infected our society.

We may be down, but we’re certainly not out. And there are plenty of battles ahead.