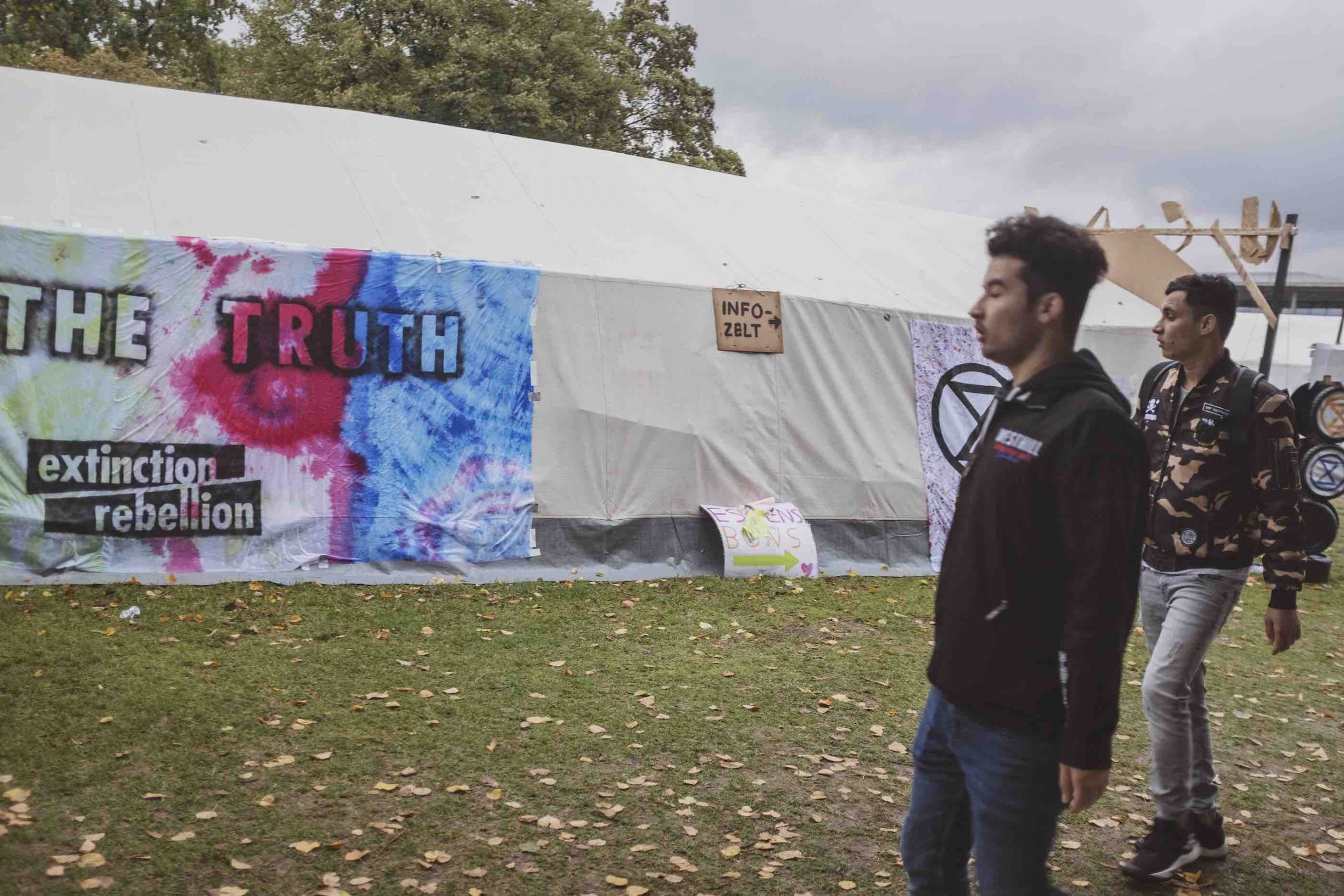 Every Genocide is Special

Extinction Rebellion and the Holocaust

For a week, it seemed, Berlin had been taken over by the left. Not just any left but something new and unrecognisable. In the place of the customary red and black flags of anti-capitalist groups, protestors were waving flags featuring an hourglass, in soft greens and light blues.

Blocking traffic, staging sit-ins around the Bundestag, and the Victory Column, the ubiquity of the movement’s icon was confusing.

On the surface, there was nothing especially political about it. Its clean lines and minimalist, design-bureau style said what it had to: that it was about time. The question was time for what.

This was no anarchist A, or communist sickle and hammer, after all. There is nothing confrontational about it. The hourglass is even empty. Still, the image is memorable and could easily be included in the pantheon of left symbols if framed properly.

The hourglass message is that it’s time to take action and that it’s urgent, is how I came to read it. It’s a very studied branding exercise, that’s impressive for its millennial vibe.

Particularly for visually-minded people like myself, who had grown up in a left overpopulated with symbols like peace signs held over from the 1960s. This was an attempt to create a new symbolic vocabulary, one suited to the climate crisis, that expresses the precarity of our circumstances.

Hence, the hourglass’ adaptation as the logo of the British-born Extinction Rebellion, a radical environmental movement that has all the pretences of a new left. One which could, at least symbolically, signify a 21st-century progressive politics, in which climate change has become just as important as social change.

At least for activists in the industrialised West, where, though environmental crises might not be as immediately obvious as the desertification plaguing Africa and the Middle East, is still inescapable.

Few would have imagined even in the 1990s that drought could have helped spark something like the Syrian Civil War.  But it did, and it is not the only conflict or political crisis in which climate change plays a pivotal role.

The fact that so many people had turned out for the Berlin protests was impressive. The city had been brought to a near standstill. The relative youth of the demonstrators – few looked over forty – was especially noteworthy. This was the Fridays for Future crowd, onto their next thing.

No wonder Germany’s far-right was has made environmentalists their number one enemy. This was the next logical step for German youth culture. It wasn’t moving right, into the fascist arms of Alternative für Deutschland, but into a proper, leftwing movement centred on sustainability.

It was no accident that these protests were swelling in a country in which the next-tipped government will be led by the Greens. Though far from their leftwing origins, there was no doubt that activists like this would deliver the under-40 voters to them.

For anyone who wondered where the left went during the Merkel years, with support disintegrating for the centre-left Sozialdemokratischen Partei Deutschlands (SPD) and growth stalled for Die Linke (the Left Party), this was it. Radical environmentalism is the new zeitgeist, and the Greens would be the beneficiary.

So much for the nationalist upsurge in the wake of the 2015 refugee crisis, which propelled the overnight growth of the AfD into Germany’s third-largest party, and an upsurge in far-right terrorism against pro-migrant politicians, Muslims and Jews. 1968 was still here, and the hippies were back, albeit with better raingear.

That is, until Extinction Rebellion co-founder Roger Hallam opened up to German weekly Die Zeit this week, referring to the Holocaust as “just another fuckery in human history”. “The fact of the matter is, millions of people have been killed in vicious circumstances on a regular basis throughout history,” he added.

Referring to other genocides, such as the Rubber Terror  (1885 to 1908), in which up to 15 million Congolese were said to have been killed under Belgian rule, Hallam was quick to point out the Nazi genocide was not unique, and that there had been other mass killings that had killed even more innocents.

Though there is truth to Hallam’s assertion – Hitler’s Final Solution was in many respects influenced by other acts of genocide, such as Turkey’s extermination of 1.5 million Armenians between 1914 and 1923 – to diminish the significance of the Shoah, to a German newspaper, was tantamount to Holocaust denial.

Why on earth would an environmental activist, who had founded a movement dedicated to preventing the end of humanity, (Hence, Extinction Rebellion) dismiss the significance of the single most iconographic act of genocide in modern times? The moral contradictions and insensitivity are staggering.

Everyone, how downplays the holocaust, is, in our view, a baiter! Roger Hallam might disagree. We don’t care!
His statement damages the Extinction Rebellion Germany. Controversies on german historical culture are the exact opposite of what we need to face the pic.twitter.com/ZLcwJP62nQ

Not to mention Hallam’s lack of appreciation of context. Few countries remain as locked in conflict over their murderous pasts as much as Germany. Particularly now, given the return of its extreme right to mainstream politics, and the importance that Holocaust denial plays in its popularity.

Routinely denouncing Germany’s culture of shame, over its crimes against the Jewish people under Hitler, few political movements have done as much to downplay the Nazi genocide as Alternative für Deutschland. Every far-right party in continental Europe has noticed and done something similar.

Whether it’s Mussolini or Franco, or the Vichy, the cast of fascist characters being rehabilitated, in spite of the human rights abuses and killings that took place under their watch, is horrifying.

The fact that a leftist joined in, however unwittingly, is the most frightening part.

As a British progressive, Roger Hallam is a more appropriate target for those who otherwise pillory Jeremy Corbyn and other leftwingers for their Antisemitism. For those who doubt Corbyn’s racism, Hallam’s is of course unambiguous.

More than anything else, Roger Hallam’s statements are a tragic betrayal of a radical environmental movement on the cusp of mainstream credibility. That he has since been repudiated by German and British members of Extinction Rebellion is of course reassuring.

The fact remains that it happened. It’s no small jump from downplaying the Holocaust to blaming Jews for the climate crisis. Or just about, more importantly, any ethnic group that has historically been blamed for something.

If Extinction Rebellion truly wants to break the mould, it is going to have to dispense with 19th-century racist baggage like this altogether. I can think of few more significant countries than Germany for the left to undertake such an exercise.

Three cheers to Die Zeit for setting the agenda.

Our movement must be safe for Jews, and for all marginalised peoples and religious groups.

We stand in solidarity with @ExtinctionR_DE, Jewish communities and all affected by the Holocausthttps://t.co/a9iIQVMlsp