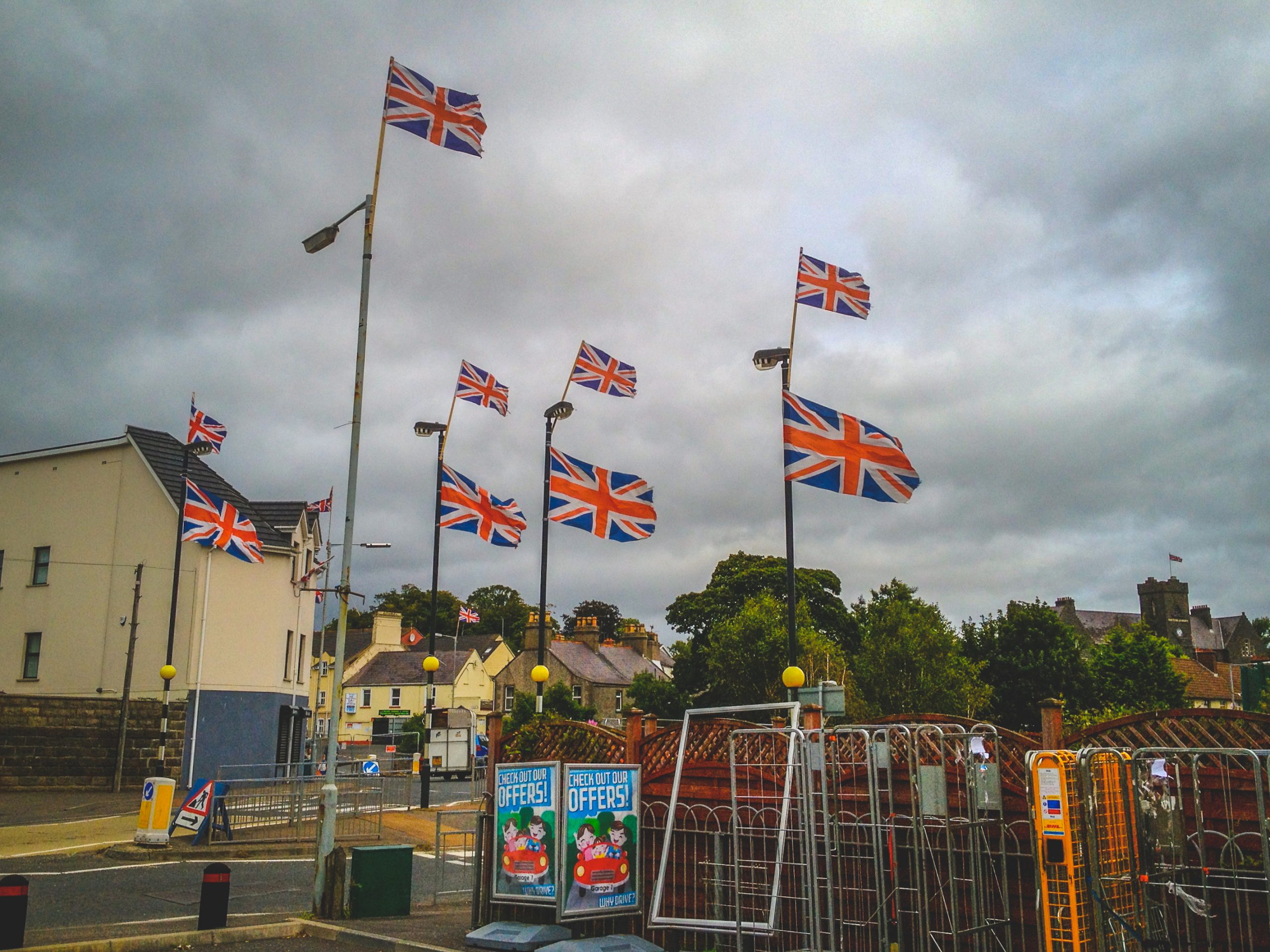 The Return of Direct Rule

Brexit’s fate was always going to be determined by the Irish border. Efforts to limit migration have always ignored the threat it posed.

A giddy cocktail of the Conservatives’ obsession with buccaneering trade freedom, Labour wanting to use the customs union to drag the Conservatives over the rocks, and Democratic Unionist Party (DUP) leader Arlene Foster propping up the government, has produced a stalemate.

In turn, these allegiances have prevented the formation of a new Northern Irish executive. Northern Ireland has been without an effective government for nearly three years following the renewable heat initiative scandal.

But as with rest of the UK, this is a crisis with roots not just in Brexit, but austerity and broader social decline.

The DUP believe they’re the ultimate defenders of Britishness. It is not merely a shared vocabulary with the unionism of the Conservative Party. Indeed, the Tories are a bit too English for them.

But even as shock troops of the British empire, the unionists of Ulster have never been deeply integrated into the British economy or culture in the way Scottish unionists are.

Historically, the prospect of a united Ireland has always enjoyed broad support in the UK.

Even in the early 1980s, as the British government tortured and imprisoned, nearly two-thirds thought the North should be encouraged to join the Republic.

Underlying British public opinion was a “Not In My Backyard” conception of UK borders, rather than a strong commitment to decolonisation.

The lack of any consideration of Northern Ireland prior to the referendum, or during, was evident in the aftermath of the 2017 general election.

Mrs May’s political survival depended on an agreement with the DUP. Some of the lazier and less edifying responses from opponents described the extra £1bn the DUP secured for Northern Ireland as “a bribe”.

Of course, the DUP are entitled to secure extra funding for the North. As canny operators, they have been pretty good at it even under Labour governments.

But the ultimate irony is that they have been seen as a thoroughly un-British intrusion by both left and right in the last few years. The more British than British the DUP are, crudely put, the more they’re regarded as troublesome Irish MPs in the UK.

Attitudes towards Sinn Féin are not much better. They often suggest a patrician liberalism towards these anachronistic Irish nationalists.

A key sticking point in restoring Northern Ireland’s Executive has been the DUP’s opposition to an Irish Language Act. Despite being endorsed by non-sectarian parties such as the Alliance or the Greens, a Guardian editorial proclaimed: “Unionists have been unduly antagonised.”

This was followed by a warning somehow as vacuous as it is worthy that:

“Bilingual road signs, for instance, would take the issue into every street in Northern Ireland, with pointless provocative effect.” As if persistent warfare had not already done that.

The total lack of curiosity about the DUP or Sinn Féin’s interests betrays a certain insincerity about the whole Brexit process.

No political party has been honest about their goals. Considerations of political realignment have ultimately determined the positions of the Tories, Labour, and the Liberal Democrats.

The DUP and Sinn Féin are seen as incorrigibles, rather than parties with distinct interests. But there are commonalities to their position.

Both are Eurosceptic parties, but nearly 90% of Sinn Féin voters opted to preserve EU membership compared to around 25% of DUP voters. Both, despite sniping to the contrary, believe a viable all-island Irish market is essential.

The DUP do support a harder Brexit they believe makes ties to the Union more viable, and entrenches integration in UK markets.

Their fear of a thousand years of Papacy is harder to maintain when people commute to work in the Irish Republic.

The border is currently marked more by forests and rivers than customs points. But soft regulatory divergence could reorient the North to London away from Dublin.

They know there has been a soft unionist majority since the Good Friday Agreement and have to carefully navigate the potential for this to be reversed.

However, it is precisely these contradictions that ensure that allegations of hypocrisy about the DUP’s stances on, for, example, abortion and gay marriage, do not really cut through.

Certainly, these contradictions have been useful in pushing against the DUP’s fundamentalist interests. MPs have used the current impasse to vote for same-sex marriage and decriminalising abortion if the executive is not reestablished.

The argument is that if they can have separate standards on human rights, they can swallow economic divergence. Neither Home Rule, nor Rome Rule, but Westminster.

But the DUP are not concerned that their social conservatism would differ the North from either the Republic or Britain. Many of their own voters do not care for their reactionary politics but recognise them as the defenders of their interests as Brits.

They can marry their immediate material interests, namely, trade with the Irish Republic, and medium-term interests that allow them to cling to Britain and the Queen. England and Ireland may long have fallen to sodomy, but the political wing of The Crucible can still protect Ulster.

Northern Ireland has also economically diverged from Britain in key ways that are baked into the DUP’s coalition of middle-class unionists and working-class loyalists.

The North is exempted from many of the most egregious welfare spending cuts and is allowed to keep 100% of the receipts of sales from social housing – compared to 20% in Britain.

Presciently, the Ulster Unionist Party negotiated an opt-out from rail privatisation in the 1990s, fearing that a foreign government could own its rail infrastructure.

As Siobhan Fenton has pointed out, direct rule from London would threaten many of these advantages, such as the exemption from tuition fees increases or the bedroom tax.

Yet these exemptions complicate the question of unity with the Republic even further.

A recent poll from Lord Ashcroft indicated that the North would narrowly vote by 51-49% to end the 99-year backstop and unite the island of Ireland.

It is a revealing poll in many ways – mostly because it shows that the tortured debate Brits are having about how European they are is a rather different affair in Northern Ireland.

Intriguingly, 41% of people state Mr Corbyn is their preferred premier despite his Euroscepticism. It is likely that his history as MP for Islington North, with a prominent Irish diaspora, and his longstanding opposition to British violence in the North override concerns about single market alignment.

But the headline figure can mystify many of the barriers to unity. Would many liberal unionists vote for unity if it meant abandoning the NHS?

Currently, the competition over resources in the North still assumes sectarianism. Housing and schools remain segregated, and attempts to desegregate are provided little support.

Would unity provide inward investment for West Belfast with 38% child poverty? Would the Oireachtas and Leo Varadkar’s government use unity to address these deep-seated crises? Or would the price of unity be making the island of Ireland a more coherent market?

The questions of identity and sovereignty of course dominate. The lawyer David Allen Green has argued that the Good Friday Agreement is now the most important element of the UK’s uncodified constitution.

The treaty defines the borders of the UK by renouncing any strategic claim over the North.

Logically, it also allows its signatories to define themselves as British and Irish.

And perhaps most astonishingly, for all the contemporary debates about parliamentary sovereignty, the principle of consent effectively defines the Irish people as sovereign.

It is for this reason that the Good Friday Agreement frames the North as a kind of antechamber, and prepares the ground for the eventual unity of the island.

Unity would end the United Kingdom of Great Britain and Northern Ireland.

If there’s a hidden logic built into Brexit, it’s the preservation of this union by destroying the Irish peace process.

That’s why Westminister’s only option is the eventual restoration of direct rule. Given the imperial nostalgia driving Brexit, this shouldn’t be any surprise.

The only question will be what to do with all the internal migrants, who, escaping a collapsing North, will swamp the UK with refugees made homeless by Brexit.