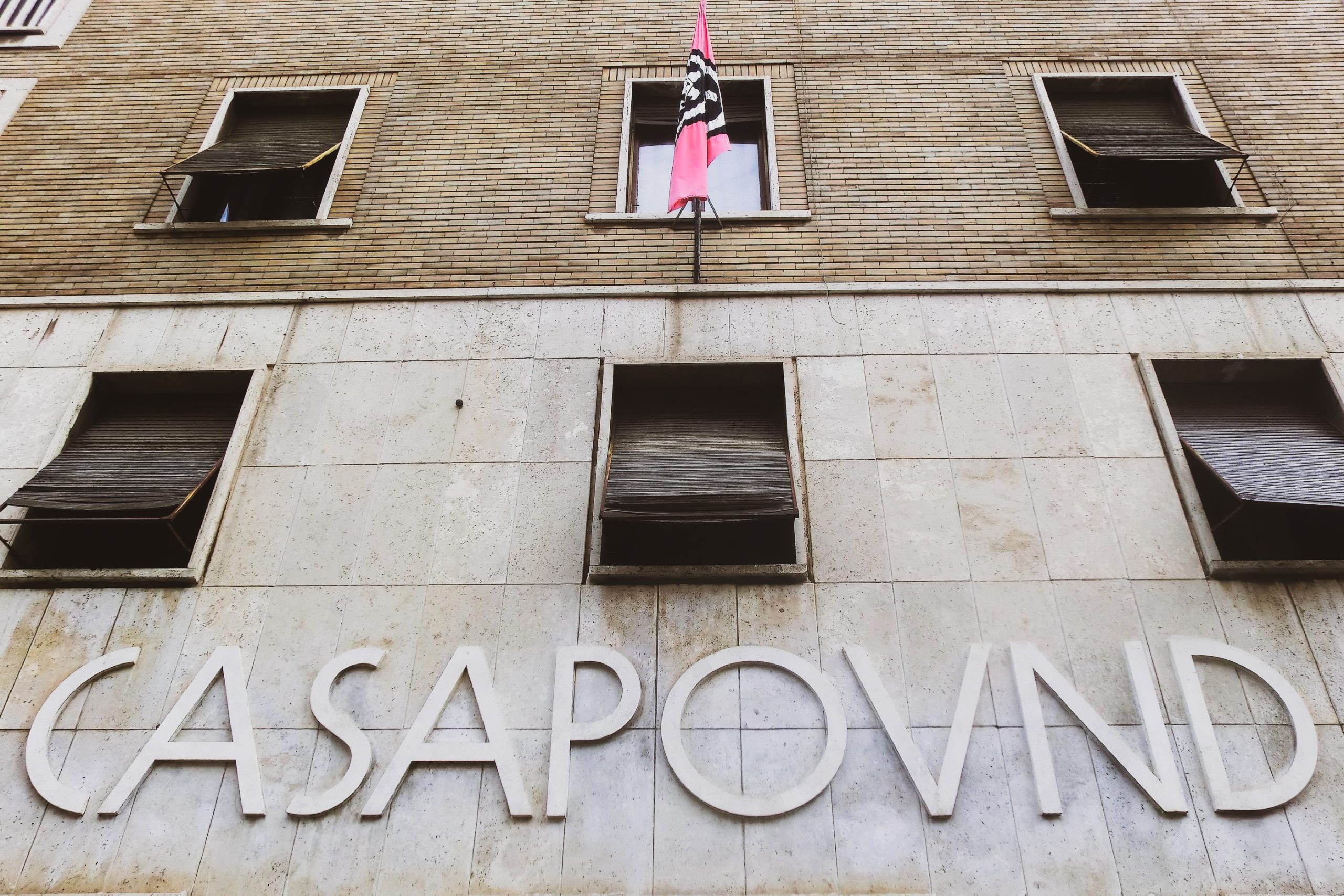 One of the overarching projects of the European new right is an incremental disentangling what it considers the “good” fascists from the “bad” Nazis.

Even the term “new right” is designed to distinguish the post-war conservative movement from its more militant “old right” predecessor.

The purpose of making such a distinction is clear: modern right-wingers correctly regard the Nazis as beyond rehabilitation, while the violence, racism, and misogyny of the fascist movements in Italy, Romania, Austria, Spain, and elsewhere have less frequently been used as subjects for Hollywood villainy. They are far less often spoken of in the same breath as Auschwitz.

The extensive intellectual and aesthetic legacy of these other fascists, therefore, provides twenty-first-century radical, authoritarian nationalists with models they can emulate without engendering the same degree of automatic revulsion that Germany’s National Socialists do.

If the names Hitler, Himmler, and Goebbels are too familiar, the less well-known Evola, Primo de Rivera, Maurras, or Jünger can fly under the radar while still being used for similar ends.

At the same time, today’s young neo-fascists have also learned from the tactics developed by leftist movements over the past half-century. Whereas left-wing activists once garnered both praise and outrage for taking to the seas to interfere with whaling ships and military vessels alike, contemporary radical nationalists set sail to prevent aid workers from rescuing migrants from drowning in the Mediterranean.

Provocative banner-drops used to be a hallmark of the anti-globalisation movement, but are now common sights at one-off white nationalist actions. Squatted buildings that serve as redoubts against homelessness or scrappy community centres have long been adorned with graffiti or stickers bearing anarchist slogans and anti-fascist iconography.

Recent years, however, have also brought squats decorated with carefully stencilled quotes from the likes of Italian futurist Filippo Marinetti, one of fascism’s earliest adopters and greatest cheerleaders.

Squatting in “the fascist-style” began in earnest the day after Christmas, 2003, when insurgent members of Italy’s neo-fascist Tricolor Flame (Fiamma Tricolore) party occupied a building they christened CasaPound in Rome’s Chinatown.

The moniker comprises both the name of fascist poet Ezra Pound and the Italian word for “house,” emphasising the new movement’s focus on housing as a fundamental right – for people it considers properly Italian.

As a fledgeling organisation, it began its work of rehabilitating the name of fascism by turning over a number of the apartments in the building to homeless families and it has continued that effort through social programming that has included lectures on cultural topics and even debates with prominent leftists.

Their objective is to present the “fascists of the third millennium,” as CasaPound’s adherents call themselves, as friendlier and more approachable than the historical Blackshirts, despite the fact that fully one-third of mainstream Italian newspaper accounts of CasaPound’s activities ascribe some sort of violence to the group (this paper found that to be the case in both the progressive La Repubblica and the more conservative La Corriere della Sera).

In the ensuing years, CasaPound has proven to be enormously successful at sloughing off the party-based, bureaucratic tendencies in neo-fascism and presenting itself as the bulwark of a flexible, energetic, youth-based movement. They now have centres throughout the country, particularly in central and northern Italy.

The effort to reform fascism’s image is not new, however. German and French new rightists have been leading the effort to give it a shiny new veneer for decades.

The godfather of this fascist revisionist tendency was Armin Mohler, a Swiss army deserter who crossed the border into Germany to join the SS in 1941 or 1942 (accounts differ) following the invasion of the Soviet Union.

After the war, having pronounced himself a “Wahldeutscher” (German by choice), Mohler wrote his dissertation on what he called Germany’s interwar “conservative revolution,” a vague collection of Weimar-era writers and theorists that managed to lump the early works of anti-Nazi author Thomas Mann together with the entire career of Nazi jurist Carl Schmitt.

‘Conservative revolution’ is a catchall term that is still very much in play within the European new right and has been adopted largely without question by writers outside their movement as well.

The notion of a conservative revolution was later enthusiastically adopted by Mohler’s friend Alain de Benoist, the leading intellectual behind the French new right and its central think tank GRECE.

Since the turn of the millennium, de Benoist has become frequent fodder and an occasional commentator for German new right media outlets like the bi-monthly magazine Sezession.

When Sezession published its February 2010 issue with the theme “Fascism,” it is no wonder that the image on the cover was the CasaPound logo, a stylised turtle.

In his article about the Italian neo-fascist group, Austrian “identitarian” writer Martin Lichtmesz described CasaPound in terms that bordered on ecstatic, writing that they are “‘neither left nor right’ but simply ‘fascista’”.

For Lichtmesz, this is a good thing. He goes on to celebrate CasaPound’s expansion to “Milan, Bologna, and Naples, all cities in which the Blackshirts sometimes met with forceful opposition.” He also admires the painted names of CasaPound’s heroes in the building’s entryway.

However, Lichtmesz also notes in passing that “there are no National Socialists, apart from Walter [sic] Darré”, the chief ideologue of the Nazi-era “blood and soil” policies.

Far-right groups in other countries have tried to reproduce CasaPound’s success, but have generally failed in their attempts.

Spain’s Hogar Social, formerly named after fascist ideologue Ramiro Ledesma, was founded in summer 2014, but after five years of trying to prove itself as a charitable fascist organisation, it has scarcely found a toehold outside Madrid.

France’s Bastion Social was established in the spring of 2017, but banned just under two years later amid accusations that it called for “hatred, discrimination, and violent action”.

When the first German neo-fascist social centre opened in Halle (Saale) in November 2017, right-wing activists might have hoped that support from established organisations like Identitäre Bewegung (Identitarian Movement) and various prominent new right media outlets, as well as connections with Alternative for Germany parliamentarians, would help grant it some degree of legitimacy.

Almost two years later, however, that has not proven to be the case. The building has been dubbed “AK16,” an acronym for its address on Adam Kuckhoff Straße, but is better known simply as “Flamberg,” the name of the public event space on the ground floor. It remains the only far-right social centre in Germany, although a group of “identitarians” did open another last month in Graz, Austria.

The Flamberg website includes a few pictures of the interior. Among other things, they depict a collection of short texts, framed and in calligraphy, hanging on a wall as though for an exhibition. One that is clearly visible reads, in Italian, “Revolt against the Modern World,” the name of Julius Evola’s magnum opus.

In April 2018, Flamberg hosted a fight training class using the motto “Living means fighting against that which negates me,” a line they ascribe to Dominique Venner, a mentor to de Benoist and a former member of the French terrorist paramilitary Secret Army Organization that sought to put down the Algerian independence movement in the early 1960s.

Venner fatally shot himself inside Notre Dame Cathedral in 2013 in an act of protest against marriage equality and Arab and African immigration to France. Flamberg has therefore openly adopted the same sort of lesser-fascist pantheon as CasaPound.

.Almost two years in, it is not at all clear that Flamberg remains a project that the rest of the German new right ecosystem is eager to support.

Its marquee event this summer, a march through Halle on 20 July followed by a block party in front of the building, was notable only for the degree of its failure. Only about 150 supporters showed up and they were confronted by some 2,000 counter-demonstrators.

The march never happened and Flamberg’s would-be partygoers were unable to leave the block all afternoon. Austrian Identitarian Movement leader Martin Sellner was there, as were a few prominent new right YouTube personalities, but the event received no significant coverage in new right outlets like Sezession or Ein Prozent and only a brief, vituperative article in lowbrow new right magazine Compact.

It remains to be seen whether a new project in Graz will reinvigorate the quest for a far-right social centre in the German-speaking world. But in the short-term, Flamberg appears to be in danger of suffering a fate along the same lines as its Spanish and French counterparts – irrelevance or oblivion.

If only that were the fate of all such housing projects.

Photograph courtesy of Wikimedia. Published under a Creative Commons license.