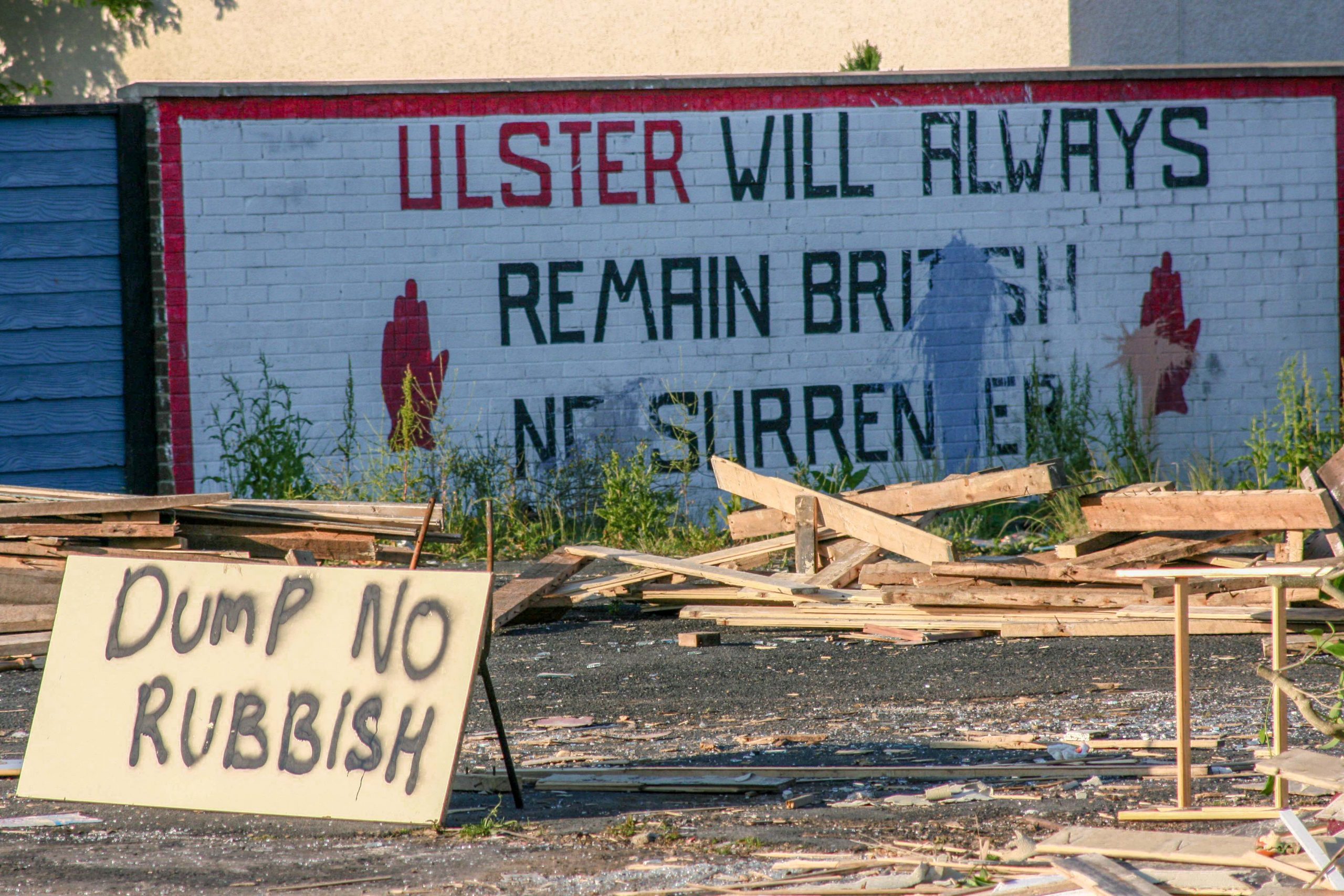 Brexit Will Not Unify Ireland

It reads like the apocalypse. According to a leaked document detailing the British government’s preparations for a no-deal Brexit, the consequences would be catastrophic.

The plans for Hollywood-sounding Operation Yellowhammer foresee shortages of medicine and fresh foods, price increases on consumer goods, and a very real prospect of civil unrest.

If it is not the case that animals will be lining up two by two at the quays, this has as much to do with the vagaries of emigration as with the available prospects in the UK outside the EU.

But, as with all of the British government’s post-Brexit scenarios, the document dispenses with the inevitable: the potential breakup of the United Kingdom.

Even in the immediate aftermath of the 2016 referendum, it was clear that the question of leaving the EU weighed heavily on the Celtic fringe.

Northern Irish fans at the European Football Championship (also going on in June 2016) taunted Welsh fans before the two teams met in Paris, singing, “We’re not stupid, we voted to stay!”

In Scotland, the Scottish National Party (SNP) made it clear that another vote on independence was inevitable.

Three years later, the chickens have come home to roost.

A recent poll in Scotland found pluralities both for staging another independence vote and for leaving the UK.

It certainly doesn’t help Boris Johnson’s case to the Scots to hang in that, as managing editor of the Spectator in 2004, he allowed the publication of a satyrical poem describing the Scots as “a verminous race,” guilty of “Polluting our stock [and] undermining our economy.”

Memories are longer outside London. Consider that, until very recently, people in Belfast annually flung rocks, bottles, and the occasional petrol bomb at each other over an event that happened in 1689.

The question of the fate of Northern Ireland is, as has so often been the case, quite vexing.

The regional economy has improved dramatically since the depths of deindustrialization in the mid-1980s when the unemployment rate topped 17%. Growth has slowed in recent years, especially since the popping of the real estate bubble in 2007.

Northern Ireland’s GDP ranked 31st out of 40 in the UK, but even at that things are better than they were two decades ago.

This is of particular importance given Northern Ireland’s fractious political history.

The three decades from 1968 to 1998 were lost to “the Troubles”, the brutal sectarian conflict between the mainly Protestant loyalists and the mainly Catholic nationalists.

The former, representing about 48% of the population, wanted some combination of firm ensconcement in the UK and maintenance of their economic and political dominance.

The latter, accounting for about 45% of the population, mostly wanted civil equality, although a certain proportion also wanted integration of Northern Ireland into the Republic.

The conflict resulted in more than 3500 dead and 47,500 injured. It also exerted a pronounced drag on the regional economy.

The need to negotiate community boundaries and the omnipresent threat of violence combined to restrict investment in Northern Ireland for much of this period.

Much of the animus of the Troubles was driven by fear within loyalist communities at the prospect of compulsory integration into the heavily Catholic Republic.

Thus it is somewhat ironic that economic connections to the Republic are central to the health of the present-day economy.

54% of Northern Ireland’s exports go to the European Union, with 36% of its imports coming from there. Northern Ireland runs a trade surplus with the Republic on the order of ￡1 billion.

That they are able to do this is due in no small part to the soft border that now exists between Northern Ireland and the Republic.

In the bad old days, the border was harder, although it was porous, with some wilder areas (such as the southern part of County Armagh) presenting ample opportunities of “off book” crossings of the border.

EU trade rules have created a low friction avenue of trade between the two Irelands. The reimposition of a hard border, which seems inevitably likely given Boris Johnson’s unwillingness to countenance the backstop, represents a significant threat to the Northern Irish economy.

Predictably, responses to this threat in Northern Ireland itself have broken down, to a great extent, along party lines.

Representatives of Sinn Féin, the Irish nationalist political party that operates in both Northern Ireland and the Republic, have let it be known that they will push for a referendum on reunification in the wake of a no-deal Brexit.

The Mayor of Belfast, John Finucane, suggested that the government of the Republic ought to form a committee to lay the groundwork for reunification.

At the other end of the spectrum, the Democratic Unionist Party, whose support is key to keeping the Tories in power in Westminster, have reiterated their implacable opposition to any such move.

Two questions present themselves at this point. First, what is the actual likelihood of a referendum on reunification succeeding? Second, would it be a good thing if it did?

Neither admits of a purely straightforward answer, but both are crucial to the future of both Irish states. The former can be more easily parsed.

According to a survey compiled by the Institute for Government, data indicates that unequivocal support for devolved government within the UK has declined somewhat (from around 60% to around 40%).

It is by no means clear that reunification would be a good idea even if it did command sufficient popular support.

These clauses were revised after the signing of the Good Friday Agreement that devolved government to Northern Ireland in 1998. The establishment of cross-community government in Northern Ireland was accompanied by a relaxation of the commitment to reunification.

Much as devolution was seen as a step forward in the political history of Northern Ireland, it certainly has resolved the inter-communal squabbles.

But Northern Ireland hasn’t actually had a properly formed government for two years.

The conflict between Sinn Féin and the DUP make it unlikely that this will get resolved in the immediate future.

The fundamental problem with reunification is that it recreates many of the problems that currently afflict Northern Irish politics but with the valence reversed.

On the night that the Good Friday Agreement was signed, major Irish politicians debated the merits of the agreement on Irish television. Responding to the claim that the agreement didn’t accomplish enough for the nationalist community, Fine Gael leader John Bruton responded “Rome wasn’t built in a day.”

This remark was somewhat more telling that Bruton intended, since the formation of Rome at any point in the timeline is precisely the thing that half the population of Northern Ireland most fears.

While the economic connection between the two parts of Ireland are considerable, in the short term this is not the kind of thing likely to reconcile Northern Irish Protestants to immersion in the heavily Catholic Republic.

Certainly, the role of religion in political and social life in the Republic has changed dramatically, especially with regard to birth control and abortion. Dublin is also one of the more LGBT-friendly cities in Europe, not that this necessarily counts as a blandishment for the likes of the DUP.

Reunification creates the prospect of an irreconcilable Loyalist minority in the north.

Northern Protestants are used to minority representation, comprising only a small faction in Westminster. But they are and have been for the best part of a century, tied in very closely to the circuits of power, often playing a crucial role in the formation of conservative governments.

Representation in Dublin would constitute a wilderness in which they could exert very little influence or control over their own condition.

Reunification would involve complex processes of administrative and political integration which would be particularly difficult to accomplish in the context of a political system in which politics is based more on webs of association than actual political distinctions.

Irish reunification is one of those romantic ideas that generally looks less good the more closely it is examined.