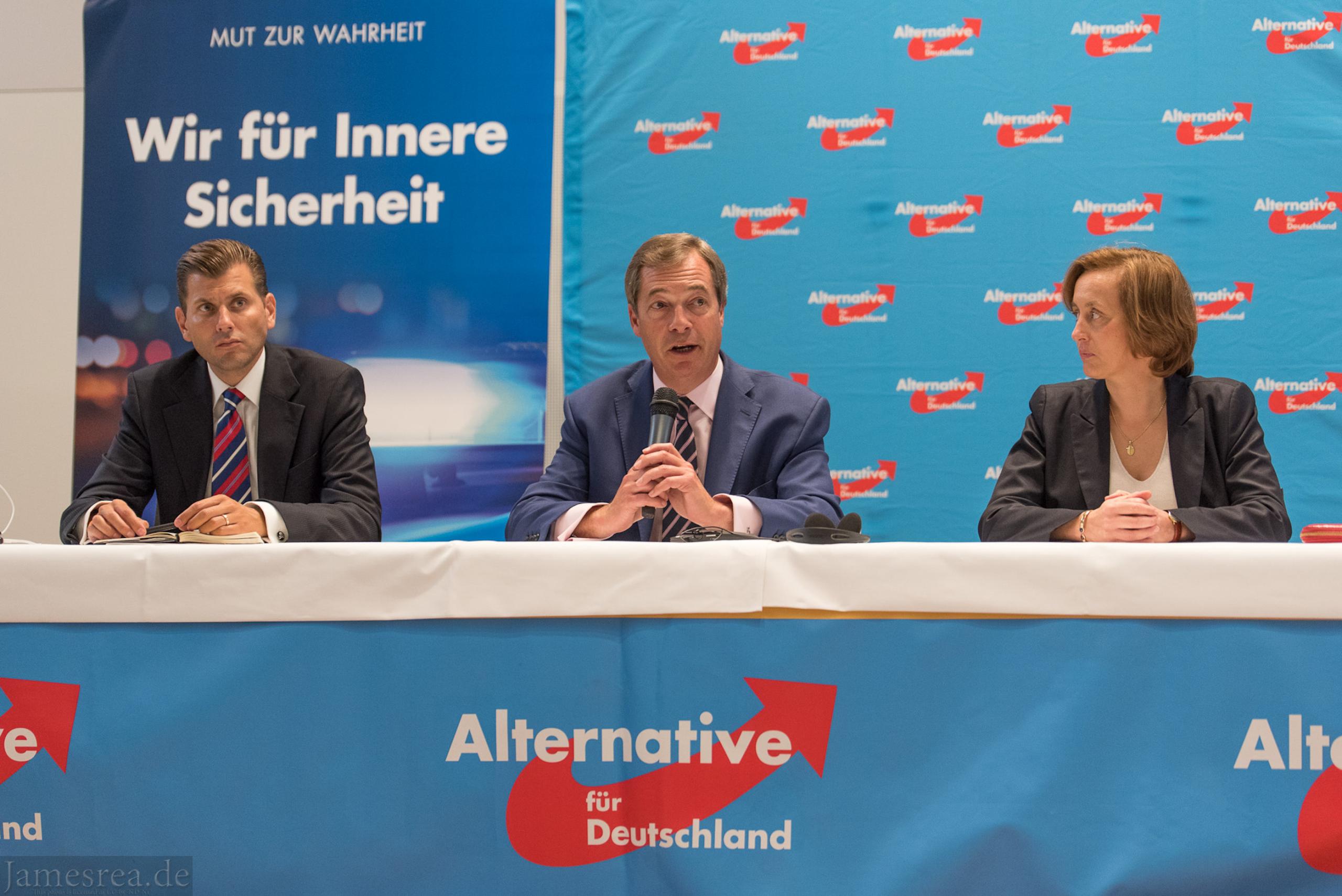 They both speak the same language. Spandau, September 2017.

From UKIP to the Brexit Party

Two politicians and their entourage walked into a West London pub for a quick pint only to find themselves arguing with a bunch of wild-eyed Trotskyists.

Except those two politicians were none other than Nigel Farage and Paul Nuttall.

One of the left-wingers pushed Nuttall on his worldview.

“Marx was wrong because he thought all men were created equal,” Nuttall explained.

Meanwhile, another firebrand Trot debated the UKIP leader about the rights and wrongs of immigration, particularly in the case of Roma people. “So how many Gypsies would you let in then?” Farage barked.

“All the Gypsies!” the woman said.

“Oh, you’re mad!” Farage replied, staggering off to the bar.

The year was 2010. The Conservative Party had just returned to the halls of power astride the Liberal Democrats.

In just six years, the men at the bar in the Marquis of Cornwallis would have struck a devastating blow against the Tory Party.

The Brexit referendum campaign was expected to be a doddle for the establishment. Every mainstream party was backing Remain and all the echelons of big business had come out on the side of the EU.

The country woke up to a triumphant speech the next day. But it wasn’t David Cameron.

“This will be a victory for real people,” Farage declared.

The Long Road to Brexit

Fast forward three years: Farage is back and the Brexit Party has stormed the European elections.

The timing couldn’t be worse for the Conservative Party.

Not only has it been humiliated in the polls. The Tories have to pick a new leader and cull the threat of hard-right populism.

Many of the people involved in the Brexit Party see it as a temporary vehicle and they will return to the Conservative Party after these elections.

The polarisation of British society may mean the end of attempts to find a compromise.

“I suspect the results mean the Conservative Party will have to take a harder line on Brexit now and the Labour Party will make a second referendum its main demand,” said Alan Sked, the founder of UKIP.

Sked founded UKIP in a bid to force the Major government to concede to its demands.

The Scottish liberal who taught international history at the LSE does not fit the Eurosceptic stereotype. He set up the party hoping it would be a liberal democratic bulwark.

“We had a dozen policy papers on issues like agriculture,” Sked said. “We didn’t have a policy paper on immigration because we assumed limited immigration was a good thing.”

“It was always about democracy and sovereignty for us. It was never about border controls and migrants.”

The double irony of the situation is that the Eurosceptic right has found a comfortable home in the form of the European Parliament.

Not only is it the platform Farage has used to attack EU officials. It’s the trough that UKIP has used to cover its expenses and fuel its own agenda.

“When we started UKIP we would have never sent people to Brussels because we didn’t recognise the legitimacy of the European Parliament,” Sked explained.

“We only recognised the legitimacy of Westminster.”

“I wouldn’t normally vote in the European elections, but this time it’s a mini referendum on Brexit,” he told The Battleground.

“I could never vote for the Brexit Party because of Farage. He’s a racist and a drunk.”

Instead, Sked held his nose about UKIP and voted for the party he founded more than a quarter of a century ago. He no longer recognises the party he launched, and blames its transformation into a right-wing anti-immigrant party on one man and one man alone.

Sked recalled a row in a pub many years before. Farage wanted to run former National Front members as UKIP candidates and Sked was very much opposed to the idea.

“We needn’t worry about the nigger vote,” Farage said. “The nignogs will never vote for us.”

It should be noted that Farage has denied he ever said those words. He would also maintain he never courted the far-right and even banned former BNP members from joining UKIP.

The UKIP leader later expelled Farage just before resigning after the 1997 general election.

Those elections brought Tony Blair to power on a triumphant wave to oust the Tory government. The new order would be so pro-EU it would endorse freedom of movement and even contemplate taking the UK into the eurozone.

It’s hard to believe this era was so recent. It all seems like a dream now.

End of the Line

Two decades on, the country is barely recognisable and the balance of political forces are reorganising around two opposing aims: either no deal or no Brexit at all.

The retired LSE professor now contemplates a swift break with the European project.

“Theresa May could have united all Brexiteers behind the Lancaster House speech,” Sked said. “But after the 2017 election she watered it down, again and again.”

“Leaving the EU with no deal is just leaving on WTO terms,” he said. “The disruption would only last a matter of weeks and things would soon stabilise.”

Most Leave supporters are increasingly in favour of no deal after three years of wrangling over the fine print of prospective deals. Yet it was always plausible that some kind of ‘soft’ Brexit deal was inevitable.

Those days are likely now over given Farage’s win in the EU poll. What happens next will decide the future of the country.

May’s successor will have to listen to the Conservative voters and find a way to buy-off the Brexit Party.

The real difficulty is that the next Tory leader will have to promise a ‘managed’ no deal without being able to deliver on it.

There is no legal reason why the UK government can’t just avoid any votes and let the country crash out on 31 October.

However, there’s no guarantee the next leader will have the guts to do this.

It may be that the Conservative Party will need to go back to the public, whether it’s an election or a second referendum.

Neither option is palatable for the Tories, or its hard-right Leave base, but something will have to give.

The clock is ticking. The end of the line is fast approaching.