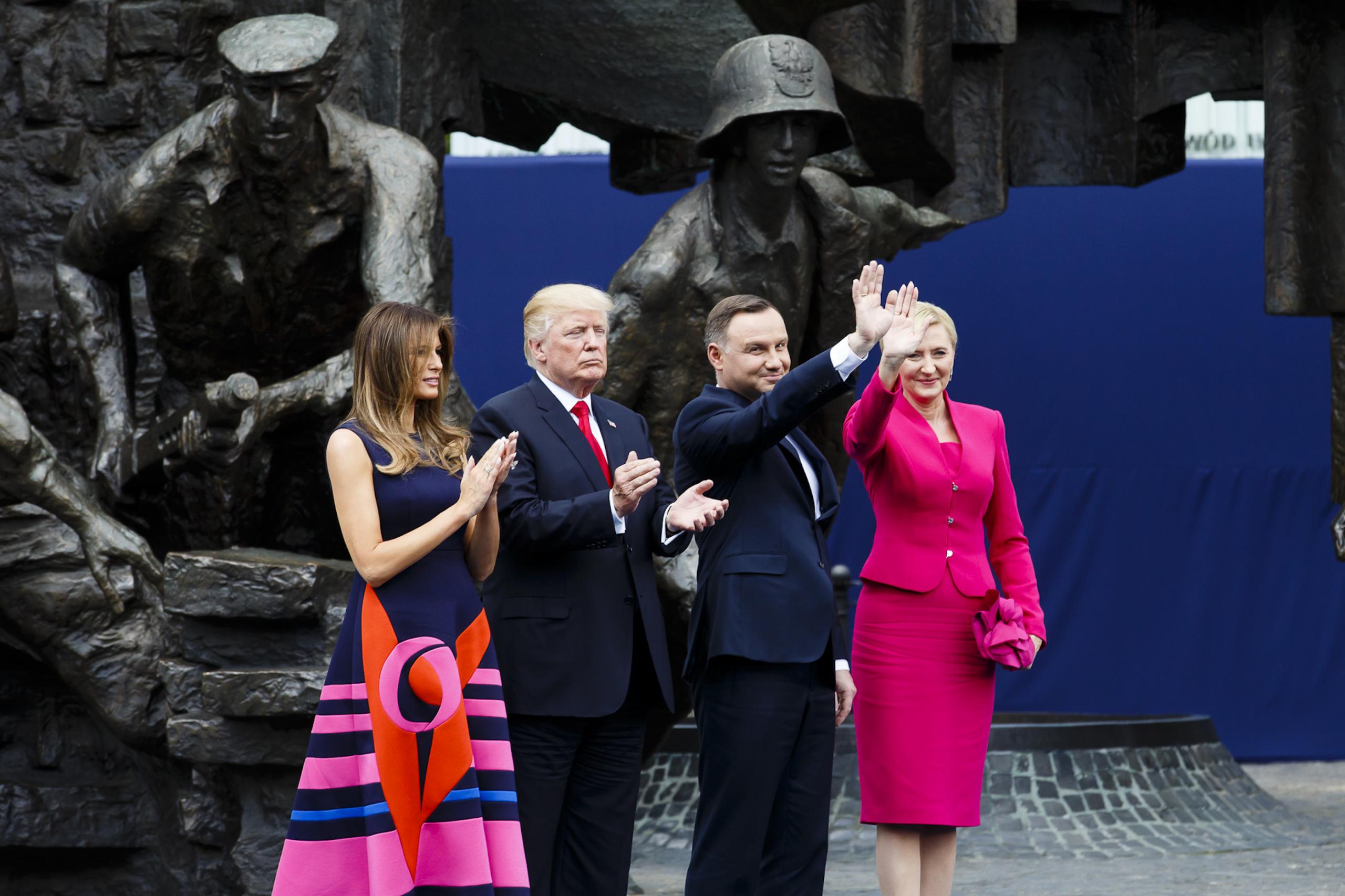 Trump and the Future of European Politics

The West is getting populist, roiling politics across Europe and the Americas. Centre-right parties, such as Germany’s governing Christian Democrats, and Britain’s Conservatives, find themselves being pushed rightwards in heretofore unimaginable ways.

Fearful of the rising poll numbers of far-right insurgents, the CDU and the Tories have increasingly embraced their extremist flanks, quietly changing their policies on immigration, or taking over their sovereigntist itineraries entirely, such as Brexit.

The watershed moment was the 2016 presidential election in the United States, which brought Donald Trump to power.

Influenced by a populist hangover from the Tea Party movement of the early teens,  Trump transformed the Republicans into a fully xenophobic, nationalist party, the likes of which had not been seen in the US since the 1960s.

And it’s only just beginning. Parties of the traditional spectrum of American and European politics continue to struggle to respond to 2016.

Europe’s new populist movements unabashedly channel the memories of politics forced to live in the shadows since 1945. Indeed, the closeness of many parties, such as Alternative für Deutschland in Germany, Rassemblement National, in France, or the Lega in Italy, to elements of the fascist past, make it is easy to elide the differences between them.

The problem for mainstream parties in the present (and this includes not only parties of the European centre, but the left, as well as the Democrats in the United States) is to get a handle on what populism is, in order to find a road beyond it.

Two approaches dominate the discussion, both academically, and in the pages of major newspapers such as The Guardian, which has been running a multi-month series on populism in the lead-up to the EU elections in May, often featuring scholarly commentaries.

The erstwhile British newspaper is right to go to these sources. While often incomplete, the articles commissioned nonetheless point the right way, towards a politics that claims to be the new spirit of the age in Europe.

In keeping, The Guardian relies on two types of writing on populism: social scientific and theoretical. The former is most prominently associated with the most appealed to scholar in the series, Cas Mudde, a Dutch political scientist of centrist leanings.

Populism, Mudde argues, is a creature of its environment. Chameleon-like, it reflects whatever the dominant politics is, left or right. It describes a consistent division, in politics, between a virtuous people and a corrupt elite.

Populism can thus be an element of fascism or communism, but it is not reducible to them, nor they to it. Hence, Syriza, Podemos and Cinque Stelle are often referred to as leftwing populists as much as UKIP, Geert Wilders’ PPV and the Sweden Democrats are branded, national populists.

Always in the background of both The Guardian series and Mudde’s work is Ernesto Laclau, the late Argentinian political philosopher, who, in his appropriately titled 2005 book, On Populist Reason, first defined populism is as being about class conflict, between haves and have-nots.

But what distinguishes Laclau’s understanding from how we view it today is his belief that it is an irrational response to inequality. That’s why far-right politicians, such as Matteo Salvini, can appeal to leftwing anxieties with rightwing policies, on, for example, immigration.

The inconsistency is relative to what we expect out of politics, but the results are always rational — just reactionary. Populism is not so much about two different approaches to social anxiety, but a way of appealing to a broad political constituency for otherwise obvious ends.

There are a number of ways in which Laclau’s approach touches on the rise of Donald Trump in the United States and his influence on today’s Europe. Trump seemed at first to express a kind of novelty that his supporters at least found refreshing.

But, as Adam Tooze noted in a recent article in the London Review of Books, the president’s policies are not quite so far outside the Republican mainstream as was previously supposed, particularly since that mainstream has shifted distinctly to the right following the Tea Party.

Since the days of the Southern Strategy, Republican politics has involved increasing degrees of outright racism, combined with an increasing fascination with the expansion of America’s military-industrial complex.

When one gets past Trump’s propensity for saying ridiculous things on Twitter, the actual politics he is pursuing are not that far out of plumb with what Republicans have been espousing since the days of Barry Goldwater in the mid-1960s.

The outcome of the Southern Strategy was a transformation of American politics that found its apotheosis in the rise of the grassroots of the Tea Party. Key to the new Republican politics was the project of getting poor whites, trade union members, and (to a lesser extent) the denizens of the suburbs to vote against their immediate material interests.

In the days of “actually existing socialism,” the primary strategy was the red scare and the prospect of lean barbarians from the East taking all that white Americans held dear. The post-Cold War era saw a stripping down of this strategy. The end of communism saw the search for a new enemy.

This was found in the Islamic terrorist who, by happy coincidence, looked enough like the people from south of the Mexican border that fear and hatred of the one could without too much difficulty be transferred to the other. This was coupled with a Darth Vader-style Keynesianism, in which economic growth was sought through massive increases in defence spending.

The modern Republican mainstream argues for smaller government through swingeing cuts in public services and discretionary spending combined with tax cuts that primarily flow to the top 1% of the income distribution.

Given that these approaches stand to degrade the condition of precisely the sort of poorer, less educated white people that support Donald Trump, the question becomes one of finding how Trump voters at the bottom understand their political choices.

One of the most remarkable characteristics of Trump’s rise has been the way that the people vs elites dynamic has worked so well for him. The president has spent decades trying to fashion himself into an insider.

But his new money made in real estate speculation did not endear Donald Trump to the moneyed elites in New York. He became the master of the tacky, from fraudulent seminars to mediocre steaks, to branded golf courses.

The problem of Donald Trump differs fundamentally from that of right-wing populism in Europe. In the latter case, the stories repeatedly indulged in by the likes of Marine Le Pen, about migrants driving down French wages, fall into well-worn patterns of radicalism and social criticism.

What the American president is doing is newer, and points the way to how populism is evolving. Trump has positioned himself at the end of a poor people’s movement he does not and will not support. His strategy is one that is purely rhetorical, relying on class antagonisms, but disinterested in rewarding his followers for their backing.

While one might blame that on a lack of right-wing buy-in to the welfare state, for example, in the United States, it doesn’t excuse President Trump’s appeal to class politics. Rather, it points to a desire to hollow it out, to use it only for expediency’s sake, while remaining committed to fleecing the poor who back him.

That’s what makes Trump so unique and so dangerous. His populism is reduced to manipulation out of his own self-interest. It’s about look and feel, without any of the substance associated with its Italian appeal to ex-Communists who now vote Lega, who will get at least a Universal Basic Income in exchange. It might not amount to much, but it’s more than American workers will ever get.

When wondering about the future of European populism, Donald Trump’s example is clearly instructive. There is no doubt that, given the history of fascism in Europe, far-right leaders are not exactly wedded to income redistribution and redressing social inequality.

The key, in looking back at how ideas of populism have evolved, is to use the American example as a prism to anticipate how the European version will eventually prove to be hollow, too. Heaven help Europe if it has to live under its own Trump to finally give up on populism.

Photograph courtesy of the Ministry of Foreign Affairs of Poland. Published under a Creative Commons license.