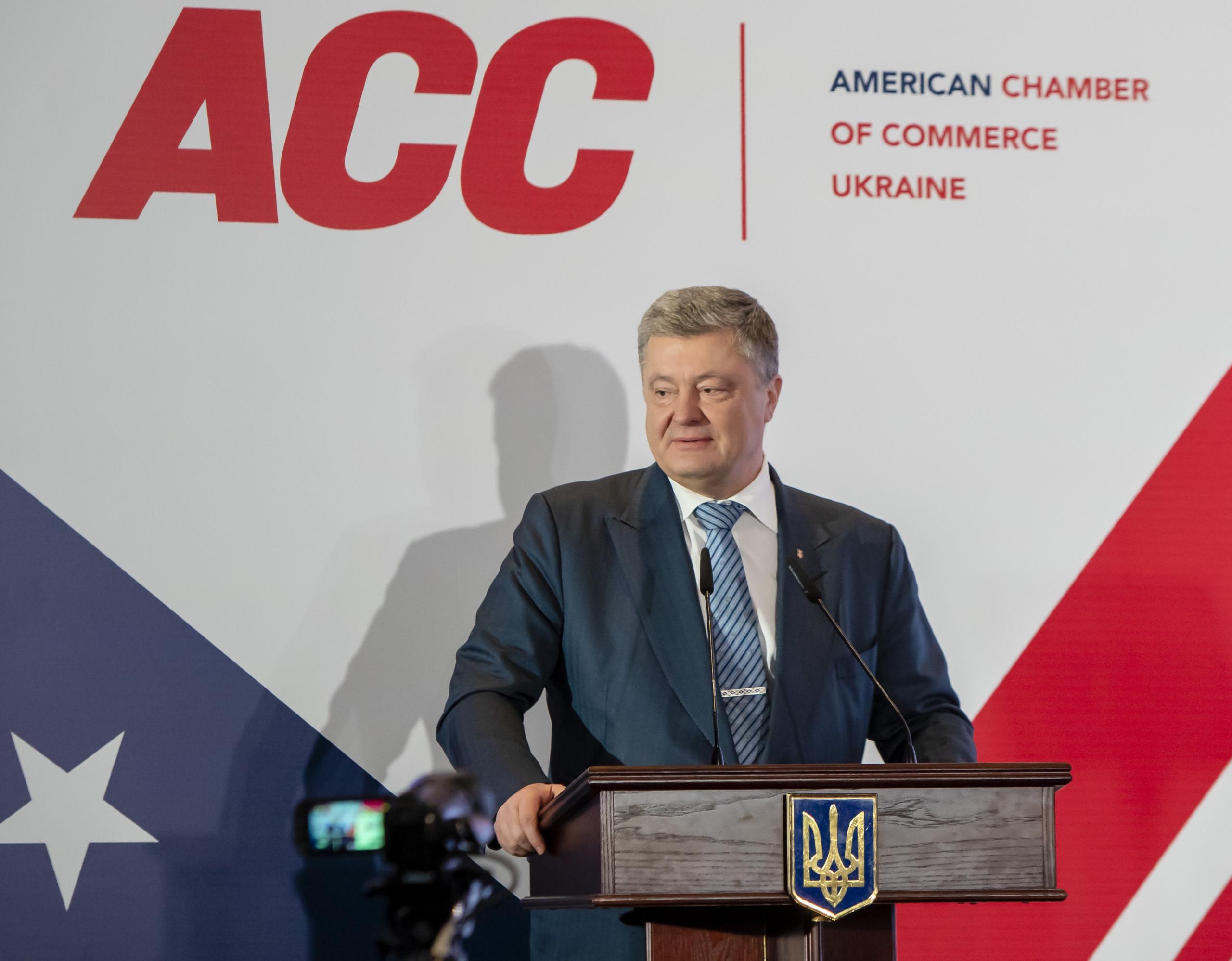 The West could do better. Ukrainian President Petro Poroshenko, February 2019.

Chronicle of a Ukrainian Election Foretold

Vote-rigging, corruption scandals, right-wing violence. Twenty days before the election, the struggle to become Ukraine’s next president is being waged ever more intensely.

For Ukrainian President Petro Poroshenko, it was a campaign stop like any other. Until a hundred thugs turned up.

Last Saturday, the Ukrainian oligarch who has been serving as head of state for four years now, spoke to hundreds of people in the provincial capital Tcherkassy, south-east of Kyiv about the necessity to keep a steady course — with him at the helm.

The police later released footage of the ensuing street battle. 20 policemen had to be treated in the hospital. Only when the president left in his motorcade, the right-wing militants were able to storm his stage. Some of them were wearing the uniform of the National Militia, the organized vigilante unit of the neo-Nazi Azov movement.

President Poroshenko is fighting for political survival. The voters are disillusioned and the majority rejects him According to polls, Poroshenko is head to head with his old rival, the oligarch Yulia Tymoshenko. But both are overshadowed by TV comedian Volodymyr Zelensky, who never served in government before, and is now leading by over 25% in the polls.

Then, in late February, a corruption scandal hit the president. His old business partner, Oleg Gladkowski, vice-president of the National Security Council, is alleged to have stolen millions from the military budget together with his son.

The well-documented allegations hit Poroshenko hard. The rebuilding of the Ukrainian army is one of the few successes of his presidency. In the election, he presents himself as the reliable and strong commander of the armed forces and protector of the nation.

“We came to the Maidan. We came to the president’s palace,” the neo-Nazi Dmitry Kucharchuk shouted angrily upon taking the stage in Tcherkassy. Earlier that day, thousands of nationalists had convened in central Kyiv to protest against the government, battling with police. They presented the president with an ultimatum: Arrest his old partner Gladkowski for embezzlement in seven days, or feel their wrath.

As a political force, Azov is of extra-parliamentary significance. The ultra-nationalists did not even field a candidate for the presidential election. But, as they demonstrated this weekend, they are able to mobilise thousands of violent young men in the streets. And on 31 March, when Ukrainians head to the polls, they will serve as officially registered election observers.

“Poroshenko’s corrupt government has overstepped all boundaries and knows no shame. They have diffused all liberal protest — but we will see whether they can ignore the wrath of the nationalists and veterans,” the Azov movement’s political arm, the National Corpus party, posted on Facebook on 4 March. After defending the country against the Russian “aggressor”, Azov now vowed to defend Ukrainians from “rats and pigs within the country”.

The neo-Nazis are also struggling for political relevance. The Gladowski scandal serves this purpose perfectly: It is not only a patriotic affront — after all, the money was stolen from the military — but also represents exactly the kind of corrupt kleptocratic politics which even five years after the Maidan ‘revolution’ still have Ukrainian society in their grip. That he did little to change this, is the main reason for Petro Poroshenko’s deep unpopularity.

High-level corruption is, maybe even more so than the war, at the root of most problems of Ukrainian society: economic underdevelopment, low foreign investment, and a lack of justice and legal security caused by corrupt courts and police.

Ukrainian Minister of the Interior, Arsen Avakov, condemned the violence of last weekend, but also expressed basic agreement with the motives of the Azov militants. “I ask the real patriots to think of the country and to reject the spiral of hatred and chaos that has destroyed our country so much, just as much as the corruption against which they so righteously protest,” he wrote in an official statement.

Avakov controls the police and the national guard and is tasked with overseeing the elections. Observers have long speculated that he broke with the president’s camp, and is looking to ingratiate himself with his rivals. The Azov movement is seen to be close to the minister. Is it now agitating against the president in order to help his rivals win the election?

The Security Service of Ukraine (SBU), which is, at least, answering to the president, is also accused of cooperating with the Azov movement. This is alleged by Ukrainian journalists and by the minister of interior himself. In mid-February, a rally in Kyiv by presidential candidate Yulia Tymoshenko was interrupted by activists belonging to the neo-Nazi C-14 group. According to Avakov, this was done in cooperation with elements in the security services.

Connections between ultra-nationalist groups and the security services have been a mainstay of post-Maidan Ukraine, and are one of the main reasons for the near total impunity which the violent right has enjoyed in the past years. But until recently, the violence was directed against separatists and their (alleged) supporters, Roma, feminist, leftist, and LGBTQ activists. Now, the radical nationalists are embroiled in a bitterly contested electoral campaign.

With Poroshenko and Tymoshenko, two veterans of Ukraine’s tough politics are opposing each other once again. They’re familiar with all the dirty tricks of Ukrainian democracy. Already, both camps are accusing each other of preparing to manipulate the vote on a system-wide scale.

In order to mobilise his narrow base of supporters, Poroshenko — in line with his slogan “army, language, faith” — is leveraging identity politics. Mainly, however, he seeks to portray himself as an experienced statesman and guarantor of national security, while tarnishing his rivals as dangerous populists or inexperienced wild cards.

This is one of the reasons for Poroshenko’s continued backing by the Western powers, no matter how frustrated they are with his government and apparent attempts to rig the election.

“What I don’t like is the silence of the West while attempts are prepared to manipulate the election through networks of bribery,” complained Serhiy Leschenko, a Democratic Alliance MP, on his Facebook page. It will be “a grave mistake by the West” he warned, to bet on a well-known but corrupt candidate rather than on free and fair elections.

A contested election marked by fraud and manipulation would indeed undermine the authority of the Ukrainian government and potentially lead to political unrest. For this reason, scores of international election monitors will observe the voting at the end of this month

The Ukrainian government meanwhile seeks to create an atmosphere of threat in order to present the current president as the only option. The Russian secret services are investing hundreds of millions of dollars, claimed Yehor Bozhok, the head of the SZRU, the Foreign Intelligence Service of Ukraine. Moscow’s goal is to unseat Poroshenko, by any means necessary. A change in power would create instability, and in any case, there are “questions of loyalty about other candidates”.

It is questionable whether ominous warnings like this will be enough to hold on to electoral support — or support by Ukraine’s western backers.

A decision by the supreme court in late February, which terminated dozens of high-profile court cases against corrupt government officials, brought Western frustrations to a boil. If the judicial system does not make an effort to reign in the country’s governing kleptocracy, crucially needed aid from the International Monetary Fund is at risk, threatening Ukraine’s stability.

Western frustration was expressed by the US Ambassador to Ukraine, Marie Yovanovitch, in early March.

“It is increasingly clear that Ukraine’s once-in-a-generation opportunity for change, for which such a high price was paid five years ago on the Maidan, has not yet resulted in the anti-corruption or rule of law reforms that Ukrainians expect or deserve,” Yovanovitch warned.

It is also unacceptable, she added, that independent journalists continue to be subjected to intimidation and harassment.

Therefore, Ukraine’s Western backers and its voting public are currently mulling what it can expect from Volodymyr Zelensky. The rise of the television comedian, who in the series Servant of the People plays a naïve but good president, is a sign of the deep contempt in which the Ukrainian public holds its political class.

It is widely accepted that Zelensky’s candidacy was the work of his oligarch-backer Ihor Kolomoysky, who turned Zelensky first into a TV-star and then, through relentless promotion, into a political phenomenon.

But enough voters do indeed see in Zelensky an authentic and real alternative to the other candidates who are deeply entangled in a hopeless political culture. While Poroshenko and Tymoshenko are attacking each other, Zelensky is touring the country with his comedy troupe, avoiding critical journalists, and thus protecting his clean image.

The West is signalling its willingness to work with him as well. Western ambassadors are already in contact. After meetings with the World Bank and the International Monetary Fund, Zelensky voiced his commitment to the reform agenda demanded by the West.

It still remains to be seen, however, whether Zelensky’s popularity will lead him to the presidency. Unlike his rivals, he has no national political organisation or power network to mobilise support.

The outcome of Ukraine’s election remains uncertain. The competition will surely intensify in the coming weeks.

Photograph courtesy of US Embassy Ukraine. Published under a Creative Commons license.