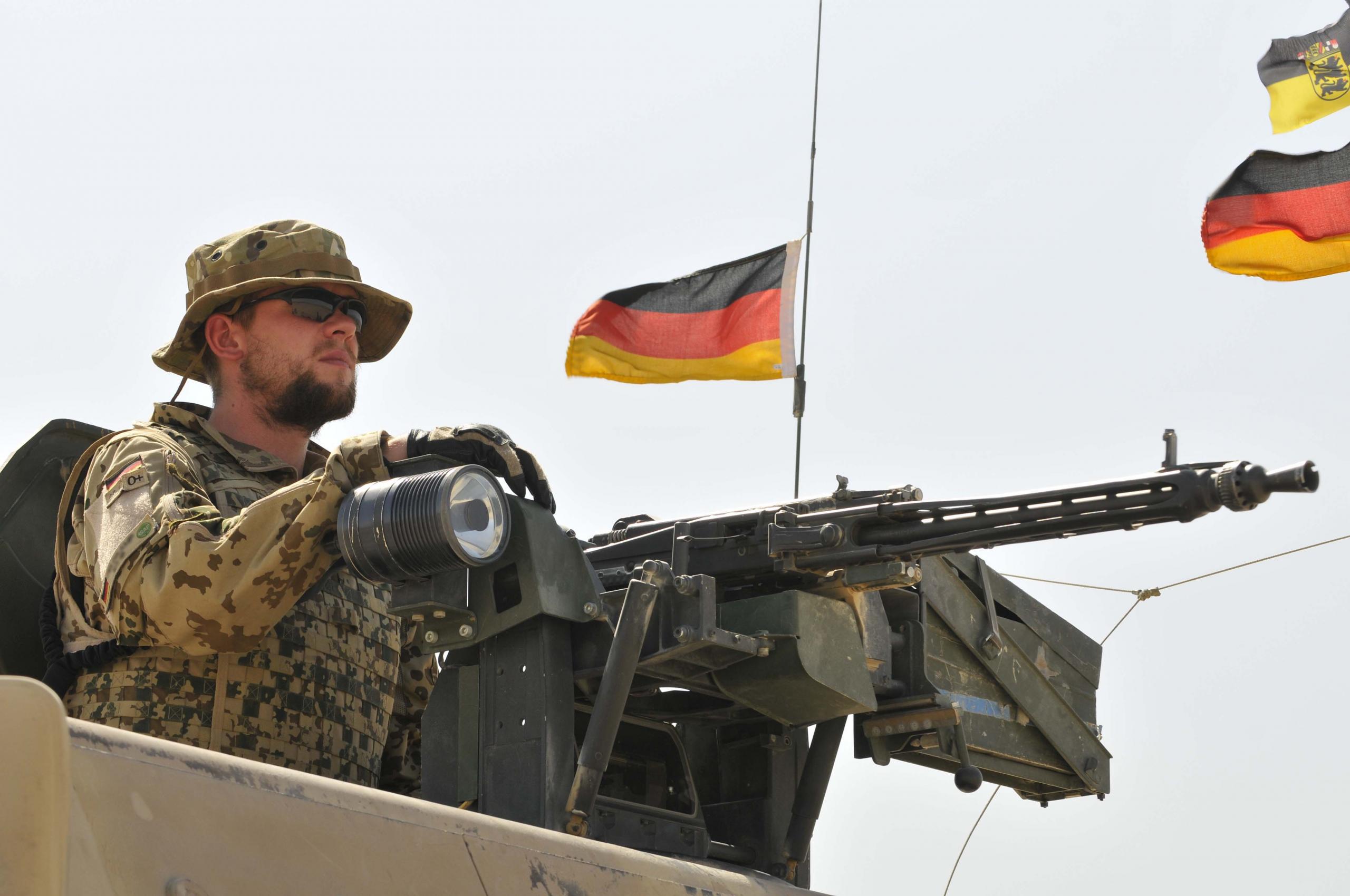 With 5,430 troops deployed, Germany is one of the main contributors of international forces to Afghanistan.

Back in Their Tanks Again

Germany and Its Military

In a widely noticed speech at the 2014 Munich Security Conference, President Joachim Gauck called on Germany to play a more “active” role in the world. This would include “not to say ‘no’ on principle” to military interventions.

Gauck struck a chord in German politics and media, which was already grappling with the country’s multiplying number of military commitments abroad.

Those are significant numbers, especially since the German economy is showing its first signs of slowing down.

To be fair, this ambitious budget is not simply the product of German power fantasies. It serves one objective above all: appeasing US President Donald Trump.

Trump has been calling NATO “obsolete” for as long as he held office and has repeatedly shocked European governments by calling into question America’s commitment to Europe’s defence.

In his view, the Europeans are freeloaders, scrounging off of the generous military protection that the United States offers them — for free.

One of the president’s central demands is that they finally raise their defence expenditures to the official NATO requirement of 2% of GDP.

Germany will at least pretend to try to appease him.

The alliance’s first Secretary General, Lord Hastings Lionel Ismay, once said that NATO’s purpose was to “keep the Soviet Union out, the Americans in, and the Germans down”.

These days, the Americans seem to be on their way out, and Germany is desperate to keep them in.

The facts on the ground, admittedly, tell a somewhat different story.

Contrary to the common narrative of the NATO-busting, Putin-loving, isolationist Trump, America has actually increased spending on its military presence in Europe and seems as determined as ever to deter Russia militarily.

And yet, the president’s attacks on the alliance mark a historic change.

Trump is certainly not the only one in Washington who wonders why the United States should still shoulder such a great part of Europe’s defence burden. The Cold War is over, and rising rival China has shifted America’s strategic focus towards Asia.

The problem is that NATO has been the bedrock of German foreign policy for decades. Today, it is in deep crisis, in no small part, due to changing US priorities.

When Angela Merkel pledged her allegiance to NATO at this year’s Munich Security Conference, as a “community of values”, she was forced to comment on reports that the Trump Administration will declare German car exports to the United States a “national security risk”.

“If that is viewed as a security threat to the United States, then we are shocked,” she remarked.

Trade is one of the many sources of transatlantic conflict which impacts Germany’s growing sense that it must become more independent from the US. Whether it’s the Nord Stream 2 pipeline project with Russia, or German firms working in Iran, under Trump, Washington has repeatedly threatened to sanction participating German businesses.

In a 2018 opinion editorial in the Handelsblatt, Foreign Minister Heiko Maas decried American dominance and urged a strengthening of “European autonomy” in the financial realm.

Who could have imagined this just a few years ago? In the age of Donald Trump, increasing European independence is the name of the game, and this goes for the military as well.

As American commitment to NATO looks increasingly shaky, Europe has reacted by devising a program of “strategic autonomy”. The EU plans to integrate its armies and seeks to build an independent military-industrial complex, which could one day stand alone without US support.

The idea for a European army is not new, but so far, defence has been the one aspect of state power that has been least affected by European integration. However, the process has not been proceeding as quickly as many had hoped.

Reports of a coming EU army are exaggerated. The most important steps that have been undertaken are industrial. Under the rubric of the Permanent Structured Cooperation (PESCO), the European arms industry is further being centralised and strengthened.

A first sign is the German airforce’s recent decision not to purchase the controversial American F-35 Joint Strike Fighter, but instead develop a new French-German aircraft being developed by Airbus, to replace its Eurofighter Typhoon fleet, in 2040.

The Luftwaffe may acquire F-18 fighter-bombers from Boeing to replace its ageing British-German Tornado jets, for their nuclear weapons capability, but the government has decided to develop an indigenous European fighter system as its long-term goal.

Despite Donald Trump’s rhetoric, the US has grown increasingly wary of increased European military independence, fearing that projects like this will slowly weaken Washington’s influence. Congress also fears it will hurt American arms sales.

“We do not want this to be a protectionist vehicle for the EU,” US ambassador to NATO, Kay Bailey Hutchison, said last year. “We want the Europeans to have capabilities and strength, but not to fence off American products, of course.”

The road to “strategic autonomy” will not be easy. One major issue is nuclear deterrence, which now with the end of the INF-arms treaty seems more relevant than ever.

France alone cannot provide sufficient deterrence for the EU, and just recently, right before the Security Conference in Munich, Paris reasserted that it would not be willing to share its nuclear umbrella with Germany.

There have some calls in the German media for a “German bomb,” but that is wholly unrealistic, for a variety of reasons. The only choice left, apparently, is to keep relying on the United States.

There are political stumbling blocks, as well. The strategic interests of the various European countries do not always converge. France, for instance, has long wished for a European intervention force, not least to provide support for its frequent interventions in francophone Africa.

But Germany is reluctant to commit any troops to the effort. The European Battle Group, which was founded in 2005 for exactly this purpose, has never been deployed.

As part of his grand plan for furthering European integration, French President Emmanuelle Macron has recently proposed a new European Intervention Initiative, which was launched last year. So far, nine European countries have signed up, including the UK and Germany.

The initiative is led by France and exists outside of the EU and NATO framework, but is supposed to be the first step towards a common European “strategic culture”. Whether something substantial will materialise remains to be seen.

Germany, meanwhile, has its own project of military integration, which emphasises territorial defence and deterrence, not interventions abroad. Under the Framework Nations Concept, various smaller countries are providing specialised military units that will be integrated into the German army.

So far, ten European countries have signed up; France has not. If this project proceeds as planned, “the Bundeswehr will become one of the most important armed forces in Europe” the German government-funded SWP think tank noted in 2017. The German military could “well become Europe’s indispensable army, with Germany as a ‘framework nation’ contributing decisively to NATO’s readiness”.

However, the authors note, “this will require the future German government to accept an unaccustomed politico-military leadership role. It will also be necessary to increase defence spending for the long term”.

This article is the second in a three-part series on the changing role of the German armed forces. The first can be read here. Photograph courtesy of Resolute Support Media. Published under a Creative Commons license.